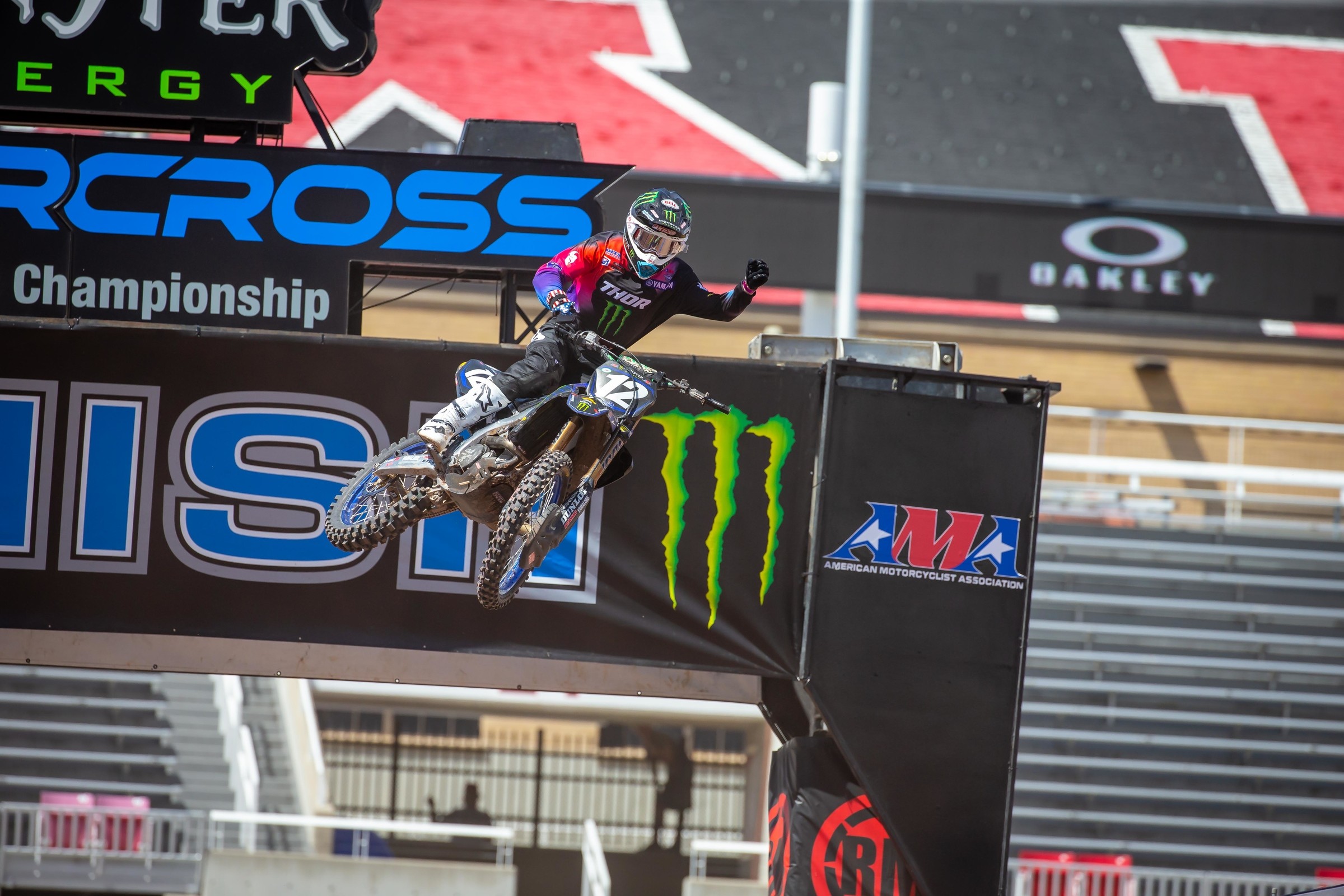 This was Shane McElrath of the Monster Energy/Star Racing Yamaha Team speaking shortly after the seventh round of the 250SX East Region staged inside the Pac-12 Conference NCAA football field located at 451 South 1400 East in Salt Lake City, Utah exactly 10 days ago: “Man, it was nice to get away with a second place,” explained the man from Canton, North Carolina of his hard-earned runner-up finish which came after a crash as well as a red flag being thrown during the feature race. “It was a tough track and very tough conditions. I’m bummed to get the red flag early and then go down while leading the race after the restart, but I’m happy with my effort. We’ll come back after the break and fight for this championship.”

And fight he’ll have to as McElrath finds himself three points adrift of current championship leader Chase Sexton of the GEICO Honda team with two main events left to be run. Poised to point out of the 250SX classification at the conclusion of the 2020 racing season, McElrath also, a least for the time being, finds himself without a 450cc contract for 2021.

“Not yet, no, I don’t have anything yet for the 450 class in 2021,” pointed out McElrath of the added pressure of looking for work. “Right now and while here in Salt Lake, I want to go out and compete in these last two races as if I have nothing to lose,” continued McElrath from the Airbnb he’s been staying in outside of Salt Lake City. “I’m currently resting my legs. I went for a bike ride earlier this morning and I’m about to do some yoga and do some therapy for some recovery. We’re really taking a light day today to get ready to race tomorrow.

“As a team, we’re all staying at the same big house together,” he furthered. “The team rented an Airbnb and it has been big enough for all of us. We’re all staying here together. We’re all doing really good together, too. It’s been pretty fun. It’s been nice to get to know the team more and to get to stay with the team. I mean, we’ve been playing games and we’ve been watching movies.”

Having come into the Salt Lake City run of races 10 points down to the aforementioned Sexton, McElrath performed well, winning the first two 250SX East main events inside Rice-Eccles Stadium to where he is now just a handful of points out of the lead.

“Really, with the time off due to COVID-19, I had time to go through another training block with Gareth Swanepoel to just get a better feel of my bike and that’s really helped us here in Salt Lake,” he said. “Daytona was really my best race, minus the result. I fell twice there, so that was a bummer. We made some big changes to the bike before Daytona and that was the best that I had ridden all year up to that point. We were really starting to pick up some momentum, but then we got shut down. It was kind of good, honestly, for my career with this year, because we really got to take advantage of all of the time we had off to really build and grow and learn the bike more. Now that we’re here in Utah, it’s time to race. I’ve felt really good. I feel like we’ve really been doing exactly what we need to do and should do and it’s been good so far. The mud race was pretty tough. But yeah, a second and two firsts is pretty solid so far and I’m ready to keep it going.”

The Eastern riders got a brief break while 250SX West returned to the stage for two races. Crunch time looms now, with one race tonight and a final Sunday event pitting the East and West together.

“It’s definitely weird to keep racing in the same stadium and it’s definitely different, but for me, I’m really enjoying it,” continued McElrath of his run inside the stadium that hosted the 2002 Winter Olympic Games. “I really like racing these races so close to each other. It is kind of tight, but I feel like with our training schedule, the racing schedule has matched up to it. It’s like during the off-season, where we’re trying to build, build, build, and then once we get into the season, we’re trying to maintain. I feel all of this is spot-on with having the races so close together, because between each race, it’s just resting. Being in the stadium, it’s really cool. I mean for us East Coast guys, we’ve had three different race scenarios. There was one early in the morning, one late at night and then one that was a mud race. It’s really been all over the place for us. It’s definitely different and really quiet inside the stadium for the heat race and the main event. It’s definitely different, but honestly, I’m having a good time really just because things are so different. There have been a lot of unknowns, but I think for me, that’s good because as a racer, we’ve got to show up and we’ve got to adapt and overcome. We need to be uncomfortable and right now that’s spot-on for where we are at. I mean, right now we’re racing every three to four days and just trying to figure this thing out like everyone else is. It’s almost exciting because you’re like, ‘Dude, I’m just going to do everything I can and that’s it.’ It’s been weird, but honestly, I’ve had a blast doing it.”

So now the pressure mounts. Wednesday night’s race could be the most important of the season.

Does McElrath believe he can take the measure of Chase Sexton in the last two races and snag the title?

“I believe I can,” answered McElrath. “Really, it’s his to lose. I mean I’m excited to go race and I want to do my best and I believe that I am a better racer. He’s got the points lead right now, but I feel like I’m in the great position. I believe that I can win these next two races, but it’s going to take one step at a time and me applying myself once I get out there. It would be so amazing to win the championship. That’s been my goal and my prayer and I’ve never really been this close. I’m like, ‘You know what? I’m here and I don’t know what’s going to happen, but I’m going for this thing.’ It’s easy to think about the competition right now, but for me, I’ve just got to focus on getting a good start and having a good race. I think that if I do that, I shouldn’t have a problem. It’s just up to me to stay focused.”