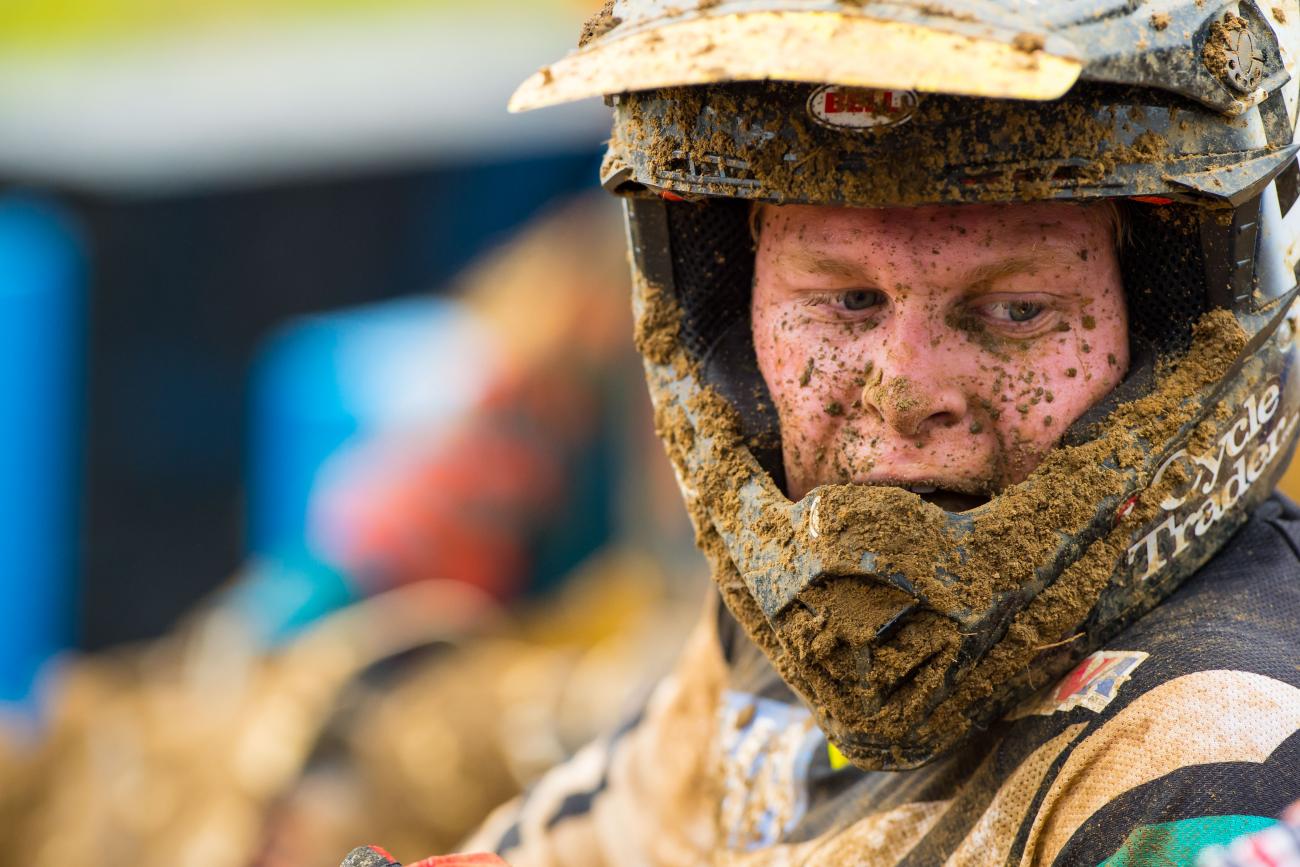 First, Alex Martin became a regular podium guy, and now he’s becoming a legit threat to win races. In fact, he has won now, earning a moto victory at Budds Creek. The CycleTrader.com/Rock River Yamaha rider led until his rear brake went out in the mud, and his brother Jeremy took the lead, only to stall on the last lap, letting Alex sneak through for the W. In the second moto, an even muddier affair, a bunch of riders had crashes and mistakes, and Alex ended up finishing seventh, tying Marvin Musquin on overall points. Musquin, though, got the win via the better second moto. Still, big day for Alex. Here’s what he said during the post-race presser, while a driving rain crashed down outside.

Racer X: My question is going to focus on those last couple laps in the second spot with your brother in front of you. Did you know that you needed that position to win the overall today or were you just riding your brains out?
Alex Martin: To be honest, it was really hard, really tough to pass that second moto, so I was kind of just waiting for some of the guys to crash or tip over because it seems like that usually happens. Toward the end of the second moto is when it gets tough and you get tired or whatever. Unfortunately, I couldn’t see the mechanics area very well just because the rut that was there in that corner made it hard to look over at the same time, so I had no idea that I was that close to the overall. Maybe had I known, I would have gone for it or something, but maybe next time.

Did you know that you won the first moto?
Yeah, actually I did, because coming up that corner, I had an idea of where the lappers were out of that corner. There was a guy on the inside [Jeremy Martin], and I looked and I noticed it was his gear, blue and orange, and I looked back. You can see on TV I looked back, and I was like, no way, what are you doing? So I was pumped. The whole two straightaways and a corner left I was just like kind of celebrating already. But then when I crossed the finish line the guy didn’t see me, so he gave me a white flag. So I actually wasn’t really sure if that was the last lap or not. But I saw him.

When did your rear brake go out in the first moto?
It was a good probably six or eight laps for me out of the moto. There was a lap or two where it was really starting to get soft, and then it just completely went away. I was just trying to downshift and ride the front brake into the corners. I couldn’t charge. That’s where really it was a disadvantage for me. He caught up to me so fast.

Talk about the ups and downs of the season so far for you?
Glen Helen first moto and then obviously Colorado and then Muddy Creek. I’ve had a lot of motos where I had to come from almost last place. It’s tough because I started off really strong at Hangtown and then had the second place in the second moto at Glen Helen. So I did have some good races, but a lot of motos with bad luck and where I was just mad at myself or mad at what happened. But I knew it was a long series, and I knew we were going to have some good races like we had today. I’m excited today I pulled through.

What did you do during the off-week?
Really just grinding and training with my brother. We have a good relationship, and we run, bike, ride together almost every day, especially with the off-weekend this last week. We hit it hard at the farm, Carmichael’s place. So we put in a lot of motos. I was so miserable last week. It was Friday and I hated the track. It was a little bit muddy. Jeremy was just like, “Man up. What happens if it’s muddy at Budds Creek? You’re going to be glad you rode in this stuff.” So it was hard, but things like that definitely come in handy. We’re living together now in Tallahassee, but after that I had to get away from him. But we have a good relationship, and I think it definitely benefits both of us. He’s usually quite a bit faster than me during the week, and for some reason we’re a little bit closer on race day. I got bragging rights for the first time ever.

It was announced this week that you signed with Star Racing for 2016. What did your time with CycleTrader.com/Rock River mean to you and what are your thoughts on the future?
Obviously, Cycle Trader picked me up a couple years when I was at a low point. I struggled going into my pro year. We kind of needed each other at the same time, so I think we’ve progressed at the same rate. And now, this year really, last year was a solid year for me, but I wasn’t where I needed to be. This year is really the year I’ve kind of broken out and shined. I feel great. I’m excited to get this opportunity for Star Racing. Honestly, I don’t think it would be possible without Cycle Trader’s support and everything they’ve done for me the last year.