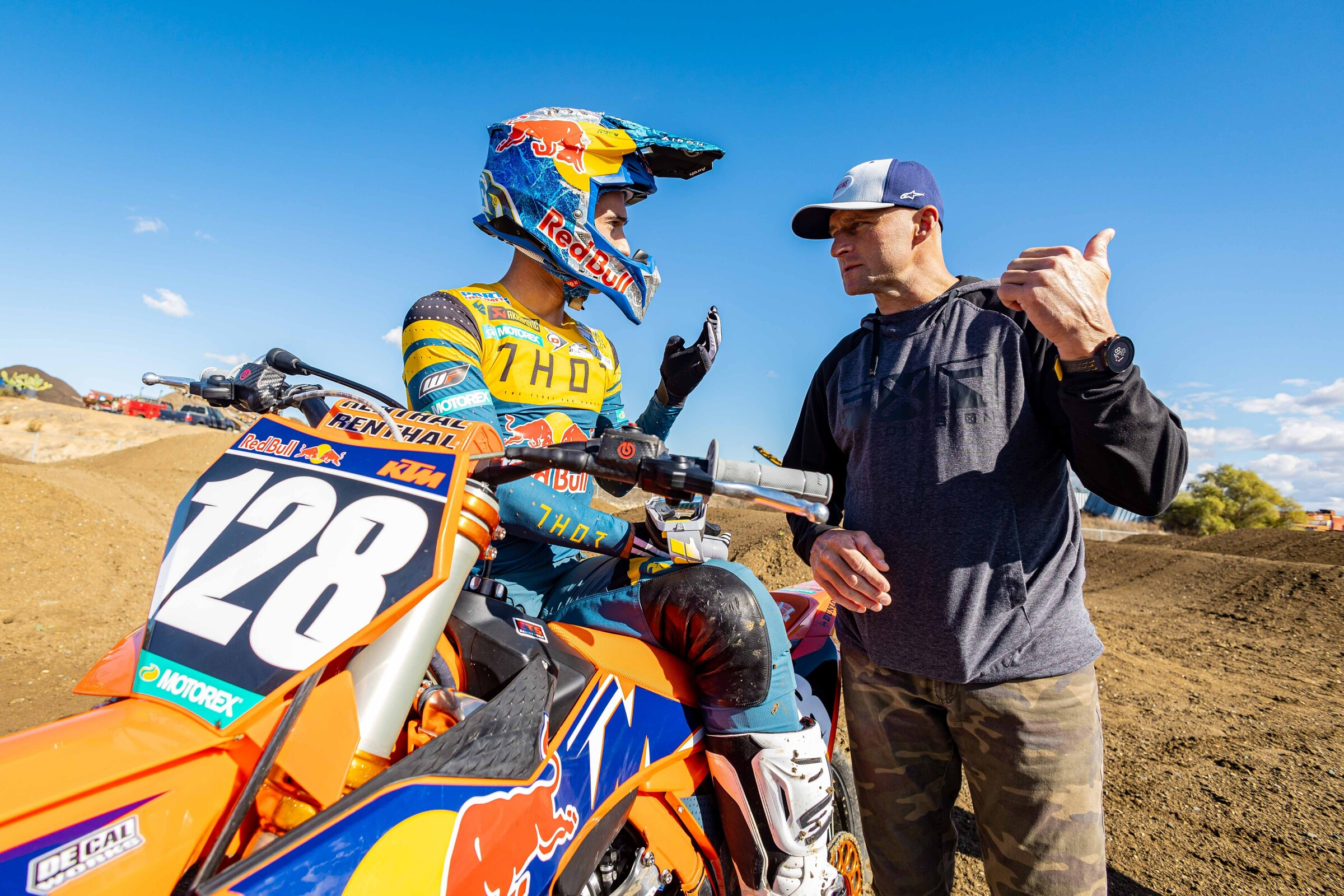 Insight Tom Vialle in the USA

It’s been a few years since we’ve seen a multi-time World Motocross Champion uproot his life in Europe to come race full time in the USA, but reigning and two-time MX2 World Champion Tom Vialle is all in. The recently turned 22-year-old Frenchman made the decision this year in the middle of his title fight with Jago Geerts before eventually sealing the deal on a second World Title. Like fellow Frenchman and two-time World Champion Marvin Musquin a decade ago, Vialle will have the full support of Red Bull KTM in a three-year deal that will see him compete in the USA until at least the end of 2025.

An exciting time no doubt for not only Vialle but the sport as well to see a decorated talent jump the pond to compete in Monster Energy AMA Supercross and AMA Pro Motocross, but the work starts now. As Vialle has just flipped into his third week of riding and testing supercross, we caught up with him yesterday at the KTM test track to see how it’s been going.

Racer X: First of all, welcome to the U.S.! Tell me a little bit about your first impressions, what it’s like being here, getting used to supercross, and working with the team so far.
Tom Vialle: Thank you! Yeah, you know it’s my first time in America. I’ve been dreaming a little bit. I think it’s a dream for everyone in Europe to come over here and do supercross. I’ve got two titles in Europe, so it was the right moment to come. We agreed with KTM for three years to come over in supercross and in motocross as well. So yeah, it’s exciting you know. I’ve been here for about a month and I’m enjoying it a lot.

Tell me about the decision to come here this year. I know you may have stayed in GPs, but you would have had to move up. How difficult was that decision and how long did it take you to make that decision?
Yeah, I can tell you it was a tough decision. I had a lot of reflection with my family because I also moved my family over here, so it was not only a decision for myself, and we thought a lot. In Europe, if you have two MX2 titles, you have to move into the 450s. I think once you move into 450s, you cannot come anymore to America. In 450, the level is really hard. So, it’s better to come first in 250s, do supercross on a 250, and then move to 450. So, we took the decision with my family and also KTM. We talked a lot, discussed a lot, and it was the right moment to come over here.

How are the emotions with coming here? Is it similar to when you made your debut in GPs where it’s like a whole new race team and everything to get used to?
Yeah, sure. You know I came into the GPs like four years ago, I think. It was in 2019, or in the winter from 2018 actually. So, a big change from me. I came from France, and I moved to Belgium. I’m doing a little bit of the same now actually. I moved to America, I start from nothing again let’s say, I’m new to supercross, so I have to start and build everything again. It’s a tough decision you know. Because in the GPs I was on a good level, I was feeling good with the team as well, and I’m not breaking everything but kind of. To start again from nothing, and now trying to build it here in supercross.

You have limited supercross experience which is a little rare for a Frenchman coming here. What about supercross has excited you so far and how interesting is it to try to learn it?
Yeah, you know in France we have a few supercross tracks around my place. So when I was younger, I tried to ride a little bit of supercross, but since I came into the KTM factory team in Europe, for four years I didn’t ride any supercross at all. We are in a contract to do motocross and not supercross so it’s difficult to train. So yeah, I just start training now. It’s been two or three weeks since I started training here in supercross and so far, I enjoy it a lot.

Is there anything that has been the more challenging part to learn? The whoops, corners, jumping?
Yeah, the whoops are something that I never really did before. So, it’s tough for sure. It’s a struggle any time you learn and all the whoops are a little bit different from one track to another. The rhythms are quite okay. I feel okay and I have some time still. I will ride the second coast [East] so I still have three months to train and that is going to be nice.

With moving over here and getting used to supercross and the team, is there anyone specifically you’re leaning on for advice or help, perhaps like Marvin Musquin who’s done it before?
Yeah, you know Marvin is in the team for one more year, so I was really happy about it. We train together here in California and it’s nice to have him. He’s still training to race so it’s not so easy, he’s not like a coach you know. But for sure sometimes we talk together on the track and it’s nice to have him. Especially also to go to the race. In the training maybe a little bit less, but once we go to the race it will be nice to have Marvin there after practice just to discuss a little bit about the track and he can for sure give me some nice advice.

What are you looking forward to most in terms of competing in the USA? Is it the talent you’re up against, is it the tracks, is it racing inside of the stadiums?
Supercross. My goal is to win a supercross one day and it’s really why I came. I think motocross in Europe, let’s say the program is pretty good. The tracks over here are very nice also, but I came over here for supercross more than motocross. Of course, motocross is my goal also, but if I have to choose, supercross is why I came.