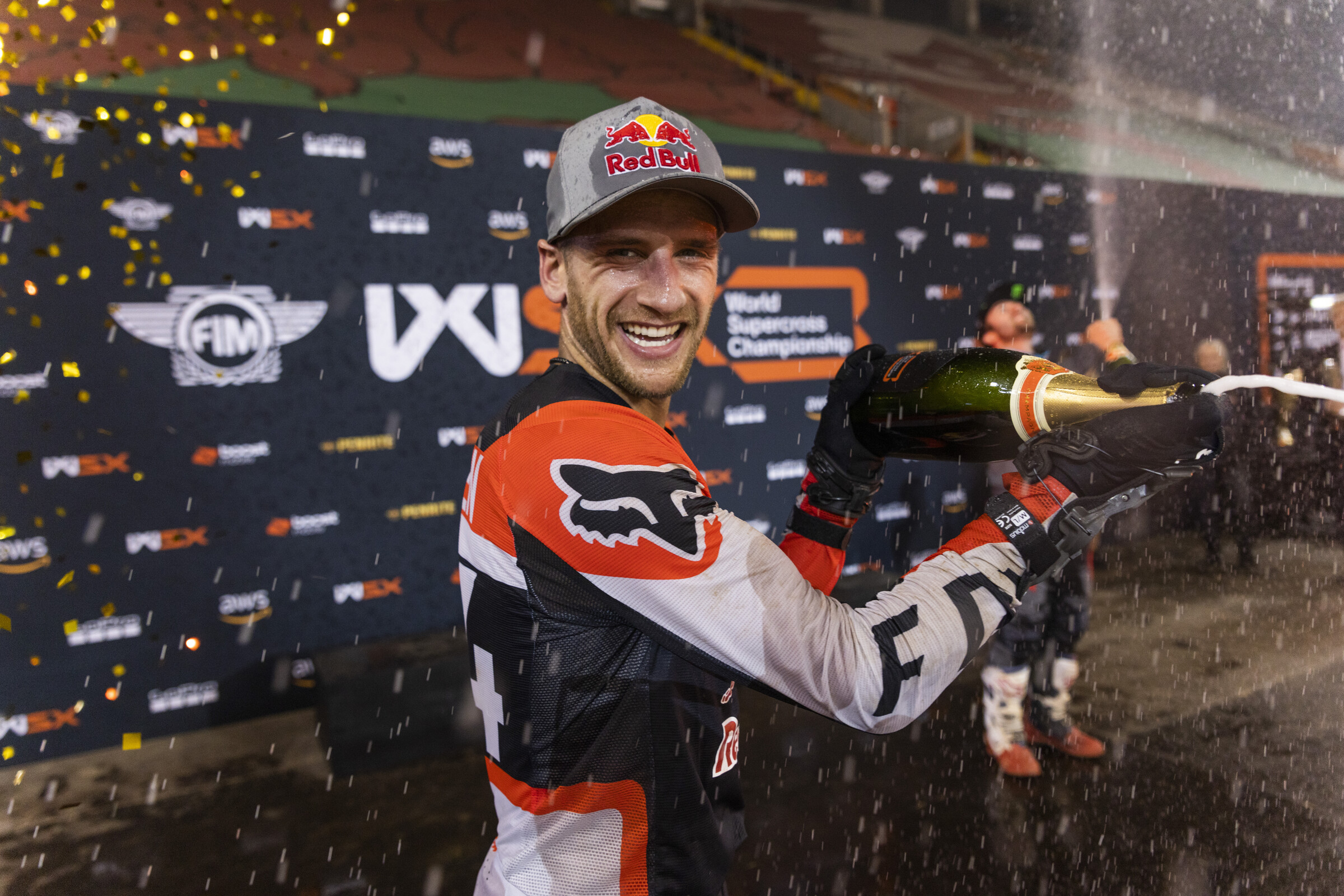 Between the Motos Roczen and Friese

The first round of the two round 2022 FIM World Supercross Championship is done and dusted as riders competed on Saturday night in Cardiff, Wales. The series has garnered plenty of attention with a new format for racing and a wild list of riders from around the world including some retired US stars coming back to racing.

But two mainstays of the US supercross and motocross scene are also racing the inaugural World Supercross Championship series in Ken Roczen and Vince Friese. Roczen is doing so after a somewhat controversial breakup with Honda HRC while Friese is right at home with his familiar MotoConcepts Honda program. As it would turn out, the two would end up battling for second overall on the night behind a dominant Eli Tomac.

After the race, our own Steve Matthes caught up with Roczen and Friese to hear all about their first night of racing.

Racer X: Interesting night for you. Jumped the quad, awesome. Crashed while leading, not awesome. SuperPole was awesome. So, an interesting night for you.
Ken Roczen: It was crazy, but it was so rad. I’ve said it over and over, I really enjoyed this, and I felt like I really needed this. Also with the team and all these new people, it was so much fun. Also, I’ve never done a SuperPole or anything like that. At a regular supercross, it’s just a drug out day, all day. Here we were just kind of winging it, which was so rad. I don’t remember the last time I was at a race, and I told my wife, “I’m having so much fun right now.” It’s cool. Obviously, I wish the three main events had gone different. My starts were hurting me, and the start turn was so short, it was a little bit crazy. I would have liked to have battled Eli a little more, but we had too many riders between us. Once I had a little bit of a clear lap, he never really gapped me all that much. I think a lot of that was due to the track. I think we can improve in a few areas and make it a little bit better. The entire section after the finish, I was just hating my life there a little bit. It just wasn’t normal, it was weird.

We needed a bit of a tougher track with more lines.
Yeah and it was hard in its own way. There was nothing we could rely on around the whole track. The berms were so flat, and it got potholes. Basically after the finish line, if you went outside…it was just weird. But I enjoyed the racing and the fans. I was also impressed how well they were able to stay on schedule. It was crazy.

I think if you don’t fall in that first one your whole night changes.
I was saying the same thing. I think that would have set me up different for the whole night. But it can happen so quick because of the conditions.

I think Eli got the inside gate. You won SuperPole. How the heck did he get the inside gate?
Here’s the thing: we picked the gates before they fixed them. So I saw that one had a hole. I picked the next one because it looked cleaner. Then I get down there and they had like loose stuff all over the place. I was like, “Why did they do that?” Also, the inside was really far inside. I got the jump on him two times, but then I spun the rear because my holeshot button didn’t come out. Basically by the second turn, he was always ahead of me.

So, what would you like to take back to America? The different lengths of each event?  SuperPole? The format?
Oh, I don’t know if they’re gonna change. I think they’re ego might be too high to do anything similar.

No but what about you? What would you like to bring back?
Like I said, this was my first SuperPole and I think that was really rad. I like how this entire day was more compact. More relaxed in the morning and then boom, boom, boom we’re done.

How was your bike?
The bike felt quite a bit different from what I have been on. I think what I struggled with the most I think was my front brake. It wasn’t a factory front brake caliper. I like my front brake really touchy. I was trying to bleed it, but it never really changed. The clutch was a little mushy. We worked hard and we figured it out with the team. But I didn’t really care about it. We knew this would be different and this was tough. Suspension feels a lot different. Like I said, when I was riding this bike for two weeks, I felt good. Then I didn’t ride for 10 days, and it was different. New boots, new rims, completely different feeling suspension. So I was super stoked we got to ride the day before.

Racer X: Vince Friese, this was great. Short races, starts were key, you were good in the whoops. Played to your strength. Good job.
Vince Friese: Yeah, I mean third behind Eli and Kenny is a win for me. The dirt really broke down, it was like Phoenix out there. And then the three main events, coming in I thought it would be easy, but the last one, it was tough. What is it, 28 laps or something? It’s a lot of laps and the breaks are not long, so it was tough. I was good in the first two, I sprinted hard, but to be honest the last one, I was just watching where I needed to be for the podium. I will say, watching those 250 races, that was some of the most exciting stuff I’ve seen ever, really. A lot of chaos. Our race was less chaos, but still a lot of good racing and I think that’s what these guys are trying to do. I’m excited to go back and watch it back on TV. We were passing all over the place and battling. So yeah, awesome night, good racing. Looking forward to Australia.

Whoops haven’t always been your strong point, but you’ve gotten better. Coming out of the turn and jumping them, you were pretty good. Eli was better in there, but you weren’t far off. I thought that was a part where in the past it would have been a weakness for you, but you did well tonight.
Yeah, I think Eli had me, obviously, covered in the whoops, but other than that, I might have been the next best guy. And in the heat race, I felt him trying to get me in the whoops, but he couldn’t get by me there. So I was thinking “Okay if Eli can’t get it done, then no one is passing me.” If he couldn’t get by me there, I wasn’t worried about anyone else.