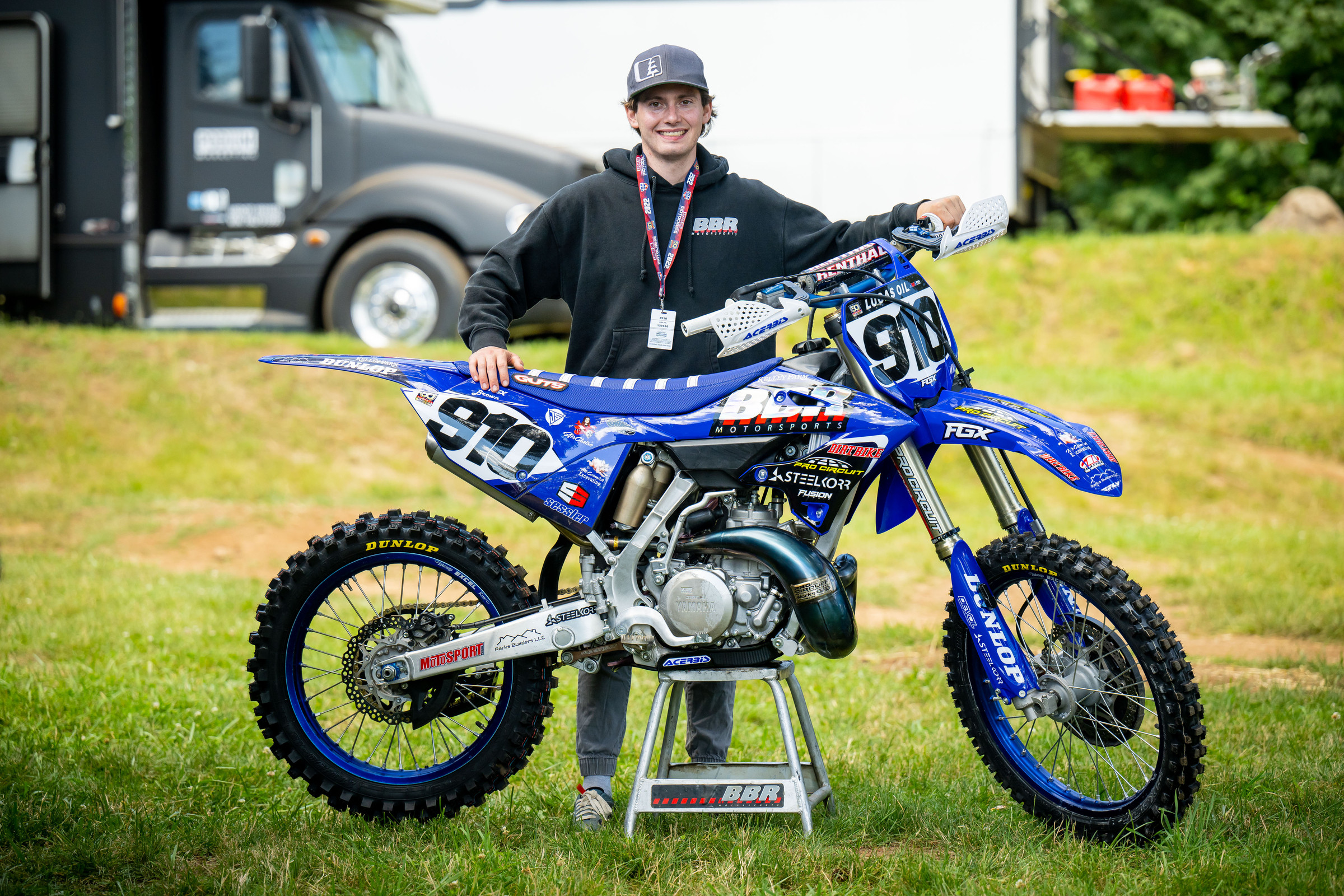 Washington native Carson Brown loves to ride just about anything with two wheels. So it shouldn’t be that big of a surprise that he showed up to his home race of Washougal on a YZ250 two-stroke. Still, crashing in the first turn only to get back up and finish 15th the first moto on that two-stroke is damn impressive. Carson took a break from riding clapped out 1987 CR125s and helping out at his family’s pit bike company BBR, to give us the lowdown on Washougal and his future plans.

Racer X: So, Carson, you showed up to Washougal on a 250 two-stroke, what was behind that decision?
Carson Brown: So basically, to do a national on a 450, or just in general, is just super expensive to do. And I had a 250 two-stroke that I had been riding a little bit and I kind of threw around the idea to Mitch Payton at Pro Circuit and Dirt Bike magazine and they were like “Let’s make this happen.” All of the sponsors are super into the two-stroke stuff and they’re super willing to help out, just because they know it’s going to get all of the fans involved and media coverage and all that. And at the end of the day, it’s just extremely fun to do and see how it stacks up.

For sure, so how under powered were you going up the hills? Did it really effect you or do you think it suited the track well?
Yeah, going up Horsepower Hill I was definitely getting smoked up that thing, there’s no way around it. But the biggest problem for me was probably the sand section because you go off that big single and jump into the sand and I was just getting sucked down on that bike super bad. But the cool thing was, to do a national on a two-stroke, most of the tracks are dug super deep, but Washougal is about as hard pack as its going to get. So honestly if there is a track to kind of favor it, I think it was that one. But still it was definitely extremely underpowered.

I can imagine. How about the fans, were they really behind you all day?
Yeah absolutely, the fans were going crazy all the way around the track I couldn’t even hear my bike. Being my hometown, the fans were definitely going crazy especially in the pits and all around. Even on the social media stuff, people were definitely digging it. So that was super fun just to get everybody involved, everybody loves two-strokes.

So, in the future if somebody wanted you to race a 250 two-stroke full time would you consider it?
Yeah, I am down to ride anything, any bike. The two-stroke is definitely awesome, its definitely not very competitive. I mean it takes a lot of work to ride and everything, but that’s half of why we do it is just to struggle and pin that thing, you know?

I would assume looking at it from a sponsor’s perspective, you got 15th place in that first moto which is impressive no matter what bike you’re on. But like you mentioned earlier you get way more media coverage, way more fans behind you. So, if I were sponsoring someone, to have them ride a two-stroke they are going to get way more attention than someone getting 15th on a 450.
It's definitely cool to do it for all of the fans. I had a bunch of people ask me, “What are your expectations?” and I was like, “I think it would be really good if I could throw it into the top 20, and if the stars align top 15.” That first moto I found myself on the ground in the first corner and I was like, “This is going to be ugly.” But we were able to drive it right on up to 15th, so I was super stoked on that.

So, you got 15th after falling in the first turn?
Yeah, we got 15th after falling in the first corner, I picked the bike up and luckily everything was still straight on it. And I knew I had better throw down really hard while everybody is still kind of bunched up. The first half of the moto I definitely threw down. And then it was funny after the first moto I went back to the pits and told everybody “We’ve got to stiffen my suspension for second moto!” But I hadn’t done a national all year so I forgot how gnarly the track gets on the second motos, and I should have been softening my suspension not stiffening it. So, I went out there second moto and honestly just struggle bused to a 20th. So that wasn’t super smart on my part but still learning.

So, on your Instagram you are kind of famous for riding anything and everything. You especially seem to like late 80s early 90s 125s. Do you think you might have been born in the wrong era?
Yeah, I would have definitely loved to live the 80s, 90s era on the two-stroke for sure. It looked like people were really passionate about it, the bikes were all about who could tune it and dial in those carburetors and everything. We just really enjoy working on the bikes and everything too so it’s really cool. I definitely love the two-strokes, especially the 125s, I just feel like they fit me for whatever reason. And I spend a lot of time on them. Definitely wish I could have raced the two-stroke era, but I will still do it on my own if I have to [laughs].

You can bring it back! So, do you think that riding the older bikes actually helps you as far as overall bike skills? It seems like you just do it for fun, or do you think that it actually helps?
Yeah, I think at the end of the day riding the old bikes actually does help. They’re not very fast and they aren’t set up very well, so you have to really look for the correct line choices and it’s all about the momentum, so it really teaches you that. I mean the brakes aren’t as good on those things, they’re not as fast, and you just really have to be perfect on those things to be able to ride it well. So that transfers over to the modern bikes pretty decently.

Yeah, I feel like if you can ride an old clunker fast you can ride anything fast when you get on a new bike.
Yeah, especially the pit bike stuff too, it really teaches flow and just riding everything like a roller coaster so that keeps it fun too.

So that brings us to the fact that you are going to be riding the pit bike des Nations for the US?
Yup, I got the call to do that again. It’s been a little while since they’ve done that, especially here in the US. So, I am looking forward to it. It went super well last time for us, so I am really looking forward to ripping some TTR 110s in front of everyone it’s going to be a blast.

Nice. So, this week is Loretta Lynn’s, do you want to share your best finish there, and what is your favorite memory?
I won some motos on the 125 there, I think it was 2016 and those were some really good times. We had a bunch of good times there. I know a lot of people struggle there but for whatever reason I just love those rough rutted gnarly weird tracks like that. So, I always enjoyed it, and I always enjoyed watching the young up and coming kids too in every class. I mean every single person on the gate, in every class there is ripping. So, it’s just kind of cool to see all levels of it, and who’s coming up and what the next generation is going to look like.

So, let’s talk plans for the future, are you going to hit anymore nationals? Supercross next year?
I don’t think I am going to hit anymore nationals this year, they’re just so expensive to do and a lot of effort goes into those. Either way I am planning on doing supercross next year so looking forward to that. As far as this summer goes the 125 Dream Race at Washougal is coming up and 32 to 1 Classic in Montana, also a two-stroke race. And pit bike of nations, and I’ve got some other stuff lined up too that hopefully I can tell you guys about soon.

What bike will you be on for supercross next year?
I don’t know for sure what program I will be on for that. Either way I’ve got a YZ250F that I had built last year before I got my AEO ride, so I’ll end up on that if I don’t get any good offers. Put it together with my sponsors and we’re going to have a blast.

Ok so you would go back to the four-stroke then for supercross?
If everything lines up right, I would definitely love to hit a couple of rounds on the two-stroke. We’ll just have to see how things are rolling. Either way it’s always in the cards and I would love to do that for the fans at some point.