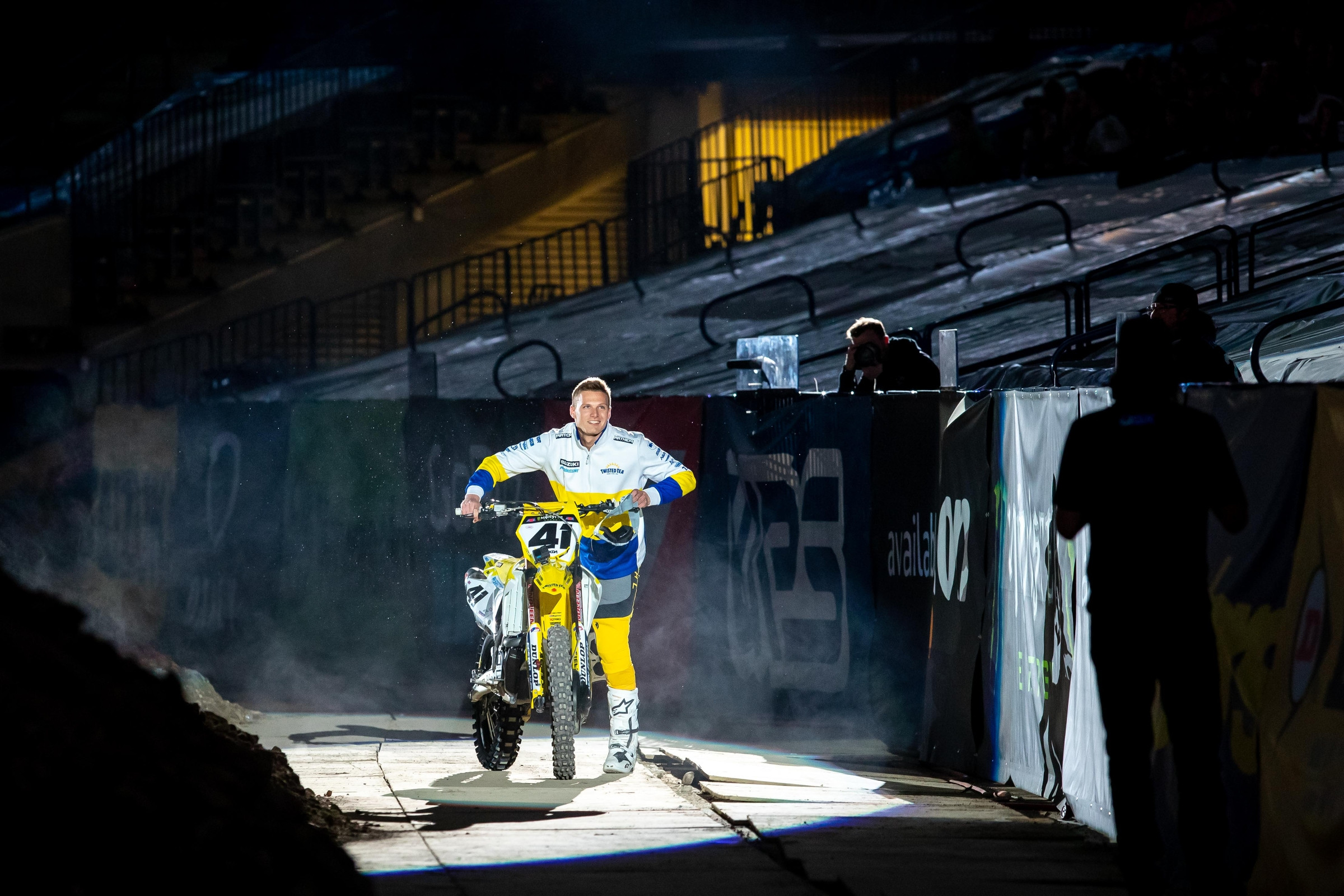 It’s really the main goal of every rider: get better. Make gains. Progress. Move forward. That makes this edition of The List pretty coveted, because all the work everyone logs in the off-season is to try to get here. Put in the hard work and see it pay off. That’s the goal.

Who stepped up in 2022 Monster Energy AMA Supercross? Here are my thoughts:

13. Carson Brown: The master of minibikes, two-strokes, and pretty much all kinds of playbikes, the very popular Brown got a shot with AEO Powersports KTM this year as a fill in and showed he can be a legit 250F supercross guy as well. He had a nice 6-8-5 stretch early in supercross, the results tailed off a little at the end, but it’s good to see the speed and skill from Instagram manifest itself at the races. The people love Carson Brown!

12. Marvin Musquin: Roger De Coster told us Marvin Musquin was flying at the test track in the off-season, and while we didn’t quite see that early in the year, things began to come together for the veteran Frenchman in the second half of the season, with a podium surge that led him to a win St. Louis. Marvin won a race last year, too, but a lot of his ’21 campaign was a mess of inconsistency, including bad starts and early race crashes. This year he was rock solid, and the difference is fourth in points with 305, compared to ninth with 231 last year.

11. Malcolm Stewart: The world is ready for Malcolm to finally get a 450SX win, and while he still did not get one, there’s no doubt he took more steps forward this year. Third in points compared to sixth last year, Malcolm, with the help of his Rockstar Energy Husqvarna team, training from Aldon Baker, and the overall confidence that comes with such support, has elevated from a mid-level racer to elite. He can win on any weekend, against anyone, and that’s going to have to result in an actual victory at some point.

10. Cade Clason: Cade was on this list last year as the number three most improved rider. In 2020 Cade was coming off of an FIM suspension and didn’t make a single main event. He improved massively last year, making 10 mains. This year he made 13 mains, but that actually doesn’t tell you the full story. First, he missed a few mains early in the year due to injury, so that 13 number should have been higher. Second, his performances in the mains were much better than last year, as he transitioned from hoping to get into the main to expecting to make it and was fighting for positions once he was there. Combine that with the field being reduced to injury, and Cade was racking up career highs on the regular, with a 10-12-15-11 stretch. Still improving, for sure.

9. Marshal Weltin: The modern-day journeyman and bounty hunter, Weltin has been all over the world chasing rides and money, one of the few riders left with the old-school mentality of finding local money races and cashing in (you’ll see him at this weekend’s Justin Brayton Shootout at Riverside Raceway in Iowa, by the way). Weltin had not had much supercross success in his career (he even spent a few years in Europe’s EMX250 series), but this year he jumped back into the 250SX East Region with his own privateer effort and made mains on the regular, six in total. He also drove out to Denver to compete in Matthes’ Yamaha LCQ Challenge race on Friday, but since that one got postponed, he entered his 250 in the 450 class on Saturday and made the Denver main anyway, taking 17th!

8. Ryan Breece: It’s a little hard to put Breece here because he didn’t even race in 2021, due to an injury, and he thought his career might be over. So while we can’t really compare him to last year, he rode too darned well in 2022 not to get a mention. He was better in his ’22 comeback than he was in his previous season in ’20. Breece only missed three mains this year, and as the field began to thin out with injuries, he was in position to make the most of it, grabbing two tenth-place finishes, the first top tens of his career. In 2020 Breece scored 37 points. In 2022 he scored 103.

Friese is now 31 and a veteran of the game, so you’re always looking for signs of a downslide. Recently, we’re getting continual reminders that age means relatively nothing in this sport anymore. Friese’s 2021 was below his standards, he wasn’t pulling his usual good starts, and was out of the top 15 quite often in the first half of the season, and top 15 is usually where Friese makes his money. Was he on the decline? This year the SmarTop/Bullfrog Spas/MotoConcepts Honda team decided to put him on a 250, and while Vince wasn’t pumped on the move at first, it helped him rebuild. He started getting holeshots again, and then results, and by the time he jumped back on 450 for the East races his confidence was back. Here’s what’s crazy: in a part-time 450 season, Friese scored two more points in the 450 class this year than he did as a full-time guy last year! Plus, he had a podium in 250SX West. Good season for Vince.

“Freckle” Oldenburg was ready to move on from the sport after 2021, and he was starting a fencing business back in Texas. Then Tony Alessi gave him a call with the 250/450 split season idea. Mitch was super consistent in his 450 races, and made a 250SX East podium. For Oldenburg, this season is a little different, as it’s not his all-time high (remember, this guy has had multiple factory rides and podiums over the years) but it’s a return to his old form. Breathing new life back into a career is pretty awesome.

6. Eli Tomac: Yes, even great riders can improve and it’s as obvious as anything that Tomac’s leap back to the front of the supercross pack is a gain over 2021. He won seven races compared to two, he won the darned title, and he might even be better than he was during his 2020 championship season.

5. Enzo Lopes: Enzo was fast this year on his Muc-Off/FXR/ClubMX Yamaha, almost a podium guy and almost good enough to get the factories looking at him. Or maybe they will? He was fifth in 250SX East points, grabbed a few top five finishes, flirted with podiums, and showed real speed in qualifying. Enzo says he has to get an arm injury fixed up to prevent his hand from going numb, because that’s what hurt him in the latter laps and prevented the podium from happening. He showed he has potential though, and in the 250 class that’s what really matters.

By the way, it’s tempting to put Enzo’s roommate and teammate Phil Nicoletti on this list too, because Phil was looking very good in supercross as well. But, it’s Phil. Nah.

4. Hunter Lawrence: We had Lawrence as the second-most improved rider in supercross last year, only behind 2021 shocker Coty Schock. Coming into ’21 Hunter barely had any supercross races under his belt at all, but he grabbed a win and second in 250SX West points, a great season after starting from nothing. This year he stepped up again, showing even more consistency, then getting on a real roll late in the year with three-straight wins, making him the hottest rider in all of 250 Supercross, hotter than, yes, even Jett Lawrence. Hunter came up short of Christian Craig’s title run, but any thoughts that H-Law is more of an “outdoor guy” are completely and totally obliterated.

3. Justin Starling: In 2021 Starling only made six mains and took 28th in points, this year he made 14 mains and finished 16th in points. You can see that Starling has skills on the bike, but he was not putting the pieces together as he jumped to the 450 class in 2021. He looked much more solid this year, so he could take advantage when all those riders went out with injuries. Starling had a 12-11-12 stretch at mid-season and finished the year with a career-best ninth at Salt Lake City.

2. Jason Anderson: It would have been so easy to use Tomac’s leap with Monster Energy Yamaha Star Racing to create a narrative. It would have been so easy to say Monster Energy Kawasaki needs to change its ways considering that Tomac rocketed back up front once he left. However, you can’t say that because Jason Anderson jumped up several notches by getting on a Kawasaki this year. In fact, it’s a close call and hard to prove, but Anderson might have improved more this year than Tomac did. From eighth in points and two podiums in 2021 to seven wins and second in points? Yeah, this was a revelation of rejuvenation from Jason.

1. Brandon Hartranft: It’s hard to even quantify how badly Hartranft’s rookie season went last year. He finished 25th in points, he only scored 37 points all year, and he was missing main events not through crashes or bad starts, but by simply not being fast enough. As he said on his own Instagram over the weekend:

“After a horrible 2021 season I was mentally defeated and needed to turn it around. I’m very proud of myself, my team, and my crew for never giving up.”

In 2021, the Twisted Tea/HEP Motorsports Suzuki rider was literally getting passed by privateers and pushed out of the qualifying spots in the LCQs. Hartranft has podium finishes in the 250 class—it should not have gone that bad. Luckily, he started finally showing signs of improvement late in last year’s Lucas Oil AMA Pro Motocross Championship, enough to keep his ride for 2022. He improved massively since then. Massively, massively. Last year he finished 25th in points, this year he finished eighth. Last year he scored 37 points, this year he scored 178. Yes, a lot of top factory talent was out injured and that helped a lot of guys move forward, but Hartranft’s improvement is clear. For example, last year they ran two Salt Lake City races for rounds 16-17. Hartranft wasn’t even in the main for round 17. At round 16 he finished 18th, two laps down. At this year’s SLC finale he finished eighth, one lap down. He’s made up a whole lap of speed. He’s getting closer.