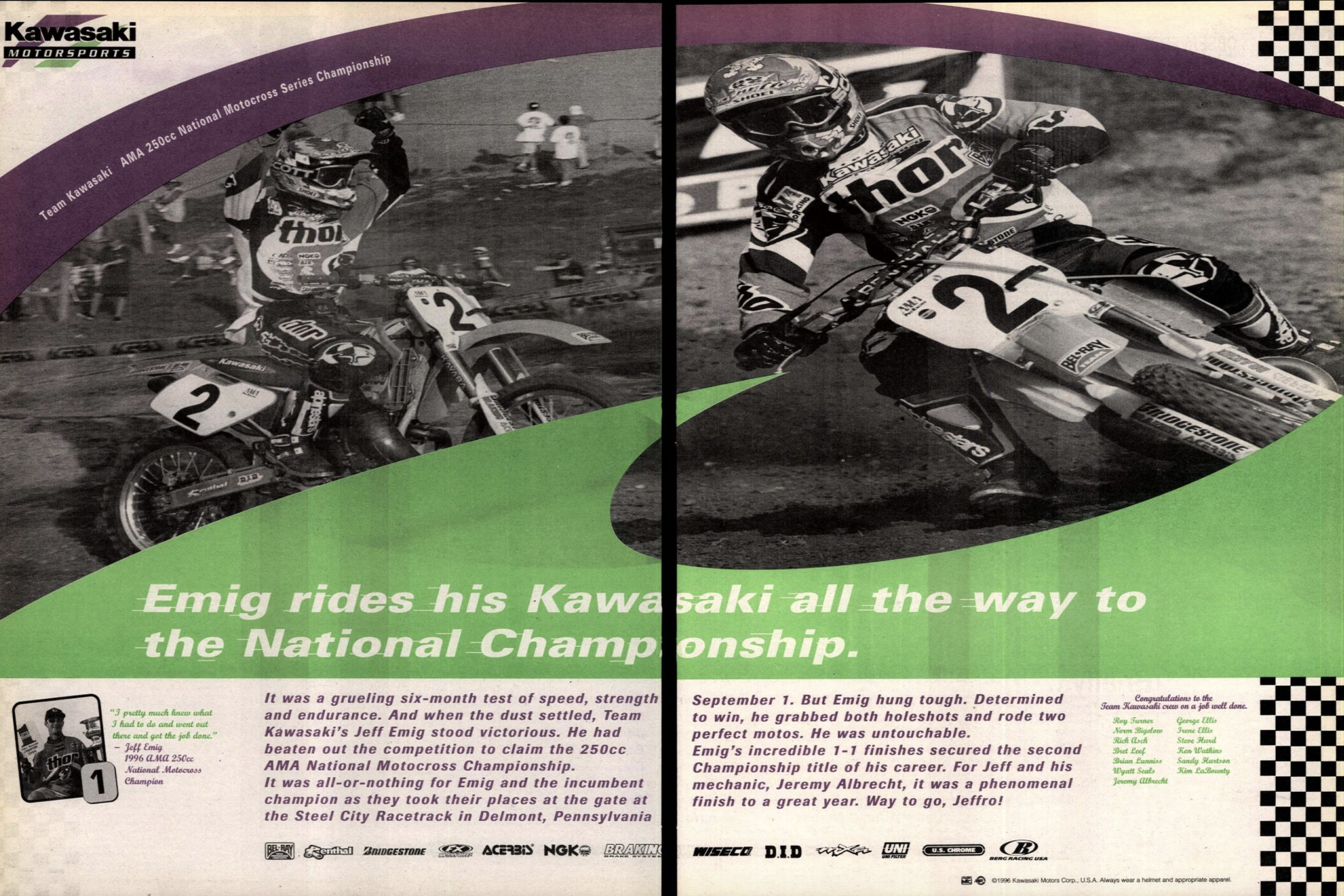 As we approach the opening round of the 2022 Lucas Oil AMA Pro Motocross Championship, we are counting down to the day by going through each of the 50 years in the history of AMA Pro Motocross. Today, the MAVTV+ Countdown follows 1996.

There’s a GOAT, The Man, The Fastest Man on the Planet, and more, but no rider in the history of the sport has started a season with the kind of dominance Jeremy McGrath showed in 1996. McGrath not only won the first 13 AMA Supercross races in a row, still the record, but he also dominated the opening rounds of the Pro Motocross Championship, going 1-1 at the first three AMA Nationals of the year. By the time the AMA Supercross Championship wrapped up in Denver on May 18th, McGrath had won all but one race he had competed in during a five-month span: 14 out of 15 supercross races, and all six 250 National motos. (Check out Steve Matthes' full long form story on that epic 1996 McGrath campaign from the people that lived it, and McGrath's one race loss is featured in another one of our contributor Brett Smith’s excellent We Went Fast deep-dives, this one on the 1996 St. Louis Supercross).

And here is the beginning of the 13-race winning streak for Jeremy McGrath, which was the Orlando opener:

It could be argued that McGrath’s level of dominance led to some complacency, or boredom, because at the Spring Creek National at Millville he tried to create his own challenge by connecting two tabletops into a huge leap. He cased it badly and smashed his foot. For the next few races, McGrath would struggle, just in time for his rival Jeff Emig of Team Kawasaki to begin his typical mid-season surge around RedBud time. Emig was holeshotting and winning while McGrath pulled off at Washougal instead of gutting out tenth-place finishes for points. McGrath would later say pulling off at Washougal was the greatest regret of his career, and suddenly Emig found himself in the points lead.

The rivals would battle, with McGrath storming back to a pressure-packed 1-1 at the next-to-last round at Broome-Tioga in New York. This set up essentially a winner-take-all showdown at the Steel City finale, with some trash talk amping up the hype between MC and Fro, who were certainly not best friends.

In the end, Emig was amazing under pressure. He holeshot the first moto, McGrath passed him, Emig passed him back and held strong to win the race. That meant he only needed to finish second in moto two to clinch the title, but Emig was on a high level this day, and won moto two anyway. McGrath got a bad start, and it was over. Emig, who had broken up McGrath’s attempt at a perfect season earlier in the year in supercross, had also stolen the 250 National Motocross Championship in one of the all-time clutch rides.

It was simpler in the 125 class, as Honda’s Steve Lamson was simply dominant. It was his second-straight title, continuing a long legacy of Honda’s CR125 dominance in the class. He outpaced the Team Yamaha duo of a young Kevin Windham and an old John Dowd, who had volunteered to go back to the 125s just to keep his factory ride. And in the last round of the season at Steel City, there was a brief glimpse at the future. He was wearing #768 and riding a Kawasaki KX125 provided by Pro Circuit. He went 16-6 on the day for eighth overall in his first-ever outdoor national. He would win his second. And third. And fourth. But that’s a story for tomorrow.

Lamson, Emig and McGrath teamed up for Team USA at the Motocrcoss of Nations in Jerez, Spain, and this time there was no doubt. The Spanish track, built at a road racing facility, was filled with jumps, and the supercross-schooled Yanks knew they would win as soon as Lamson, on a 125, pulled a heel-clicker off a jump most Europeans wouldn’t even do. Emig, dispatched to the same Kawasaki KX500 Team USA had been using at the event for years, joked that the event should have been called the “Downhill Triple des Nations.”

Team USA was finally back on top, but there would be much more drama to come in the careers of McGrath and Emig. No one knew at the time that McGrath, the four-time running AMA Supercross Champion, was about to make a huge change.

Bonus material: If you're looking for early clues of the coming four-stroke era, there was a Cycle News article that spoke of the impending doom coming to the motorcycle industry--and in particular dirt bikes--as the state of California was pushing tougher and tougher regulations. No mention of Yamaha's secret four-stroke project, but KTM's U.S. President Rod Bush explains that the reason KTM bought Husaberg was to get a jump start on getting into the four-stroke market...

And in the last issue of 1996 our friends at Cycle News were kind enough to give our little newspaper at the time, Racer X Illustrated, which featured a shot of Mike Metzger doing a very early FMX trick. Thanks CN!