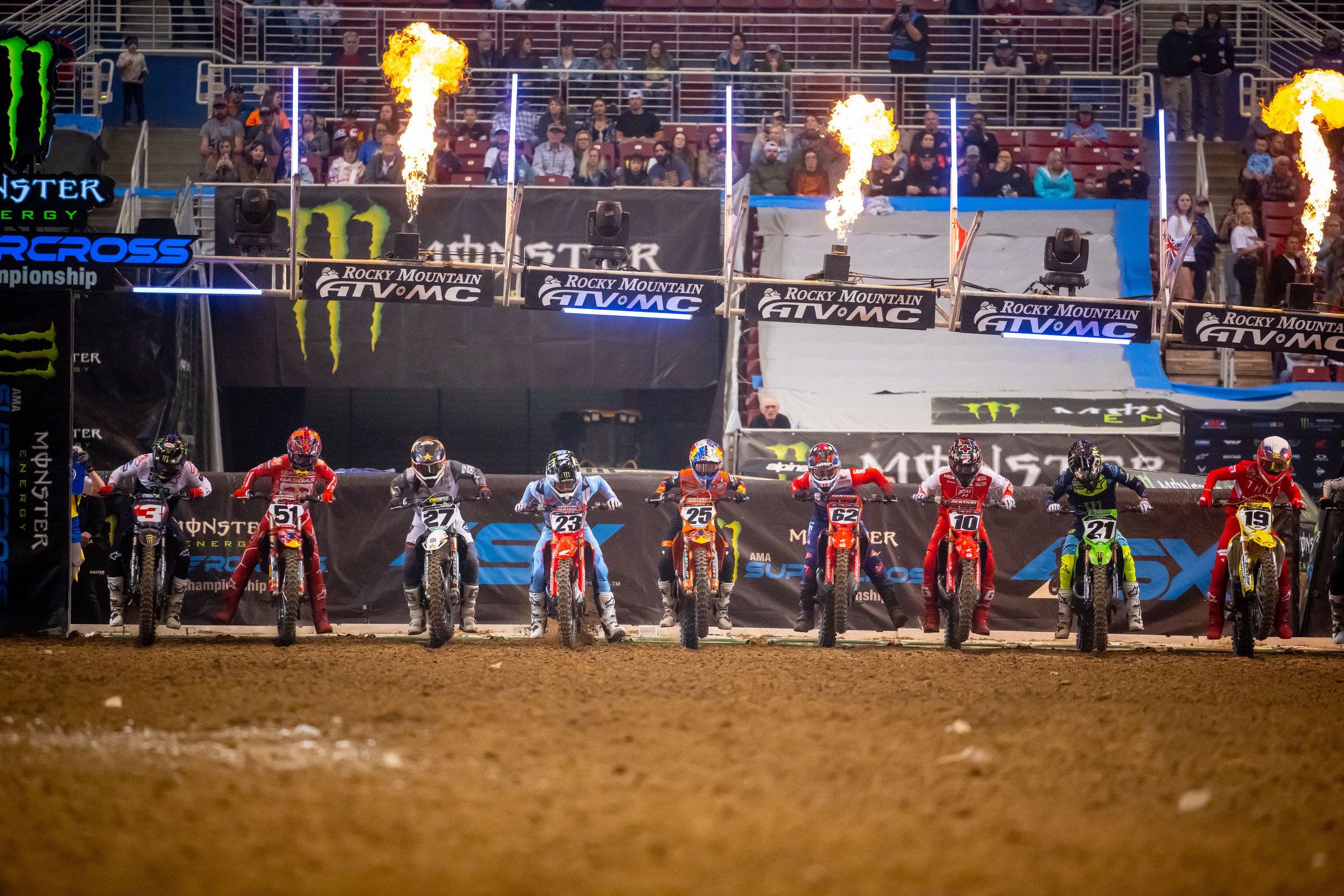 Triple Crown fever struck in St. Louis! The final race of the three-main format took place this past weekend and guess what, Eli Tomac defended his Triple Crown Championship. Amazing! Let’s talk about round 13 of the Monster Energy AMA Supercross Championship, shall we?

St. Louis was a bit of a weird one for sure in that the track was pretty basic, whoops were so-so on the difficulty level, and after the track crew worked on one rhythm lane to eliminate an option to go 3-3-4, everything was pretty easy for the riders.

But man, there were some heavy crashes out there. The soil was soft, it got rutty, and the ruts themselves changed a lot over the races. They hooked right, left, and everywhere. Riders were flying everywhere and making a lot of mistakes on a track that was, again, not that hard. Here’s the thing though, we didn’t see many of the “elite” guys make mistakes. Some did but to me it was the riders who are a notch below the “elite” guys (I can hear the complaints now) that had big ones. Well, RJ Hampshire had a pretty big one but it’s Hampshire—that’s what he does.

I think the guys up front could only push so hard because of the ruts, and they couldn’t make up any time on the obstacles because everyone was doing the same thing and they had to tip toe around. All of this led to races that didn’t provide the same type of wham-bam Triple Crown racing we’re used to but hey, they can’t all be Rembrandts, right?

Let’s get into some thoughts from St. Looey, home of Anton.

KTM has an interesting dilemma on their hands for 2023 with Marvin Musquin. From what I hear they low balled him on a contract this year and he was free to shop around, which he did with a couple of the other Austrian brands. When nothing materialized there, he went back to KTM and said that if he was going to ride for that small of a salary, it would be for SX only, which they agreed to. I think it was understood that this would be a farewell season for Marv on orange, which was cool, except I think no one asked Marv. He doesn’t seem to have any plans to hang it up and he’s gone 3-3-1 in the last three races. Yes, the field is thin but not at the very top. Marv won the Triple Crown with great starts and won the second main/race/or thing.

Look, being one of only five winners all season is something, and somehow, remarkably, Marv’s only 14 points back of second in the points. Trust me, I had to double check that because Musquin’s had some of the worst SX races of his career this year earlier. But here we are, with a rider on an expiring contract, beating his two more high-profile teammates in the points, and wanting to keep racing. I say give him the contract Roger!!!

If you’re Eli Tomac, you’re perfectly fine with what happened in St. Louis. He lost his five-race win streak due to bad starts and, like so many others, the inability to make up much time, but he crushed the most important thing—widening his points lead. Now there’s just four to go before he’s crowned a two-time 450SX champion, and the oldest 450SX champion ever, and he’s going to be the favorite for the outdoor title. AND he’s also gonna get a new contract for next year for more money! Life is good for Eli Tomac right now.

Good to see Chase Sexton back on the box after a rough stretch there. His jump off the gate for the first thing/main/race was amazing. It was like he paid the dude off to know when the gate was gonna drop. Wow. Anyway, he went on to win and then was on the box for the other two and bingo-bango, second place overall!

It’s hard to believe RJ Hampshire hadn’t ever won a supercross before this weekend right? How many times had he led laps or been near the front in a main? I don’t know, I put the over/under at 63. This weekend he got it done, like Musquin, with tremendous starts and some luck in having Jett go down in the third thing/main/race. Also, RJ wouldn’t be RJ without crashing right? And he looked to have a pretty good one in the first thing/main/race, yet got up and made a pass late to secure second, which was impressive.

We had RJ on our afternoon pit show at St Louis and he talked about how, yes he’s been vocal about the new bike but that they have made progress (mostly in the whoops) and he was in a better spot. This was before the night show so clearly he backed up those words. He also let us know that Husky had offered him an extension for next year so there’s that.

THE JETT was the best rider but he didn’t get the best starts and that was his major downfall at the race. He still cut through the pack in the first two to win but you can’t keep doing that over and over without being involved in an incident. In the third thing (race/main) he was, and it cost him the overall win. Still, he, like Tomac, widened his points gap and so all is well with the Jett. I spoke with him after the race and although he’s looking forward to racing Christian Craig this weekend, he seemed to know that the title was more important than crashing trying to pull away or pass CC.

Mitchell Oldenburg got the last spot on the podium helped by his second-to-last-lap pass on Pierce Brown. Clutch move by Freckle, and nice to see him on the box. It was the team’s second podium of the year after Friese got one in the 250SX west region. Mitch has ridden well all year long on both coasts and it was cool to see him get on the box.

Chiz was good in what might be his second to last race on the 250 for Star Yamaha. Or will it be? After the race he was talking about how he wants to stay in the top 20 in 450SX points to make some money but that if Star wanted him to stay, they might step up and help him out. Stay tuned on this one, Chiz was bummed about that pass that Oldenburg made because that cost him third and his bonuses were top-three only. Chiz was solid all night.

Filthy Phil got second in the last main and he got a TV interview also! Life is good for Phil right now—he got a top five in the 250’s and that’s pretty sweet for him. He’s really redeeming himself from that last time on JGR when he raced for 250’s. That DNQ at Indy really hurt his points.

Good to see Benny Bloss back for the Tedder guys. The pre-season saw some low key buzz around Bloss on the KTM but then he got pretty badly hurt. He’s missed the entire season so far and jumped into this race looking pretty good. He easily qualified in the top 18 and from there, rode pretty well, except for when a rut got him and he flew off the bridge.

Some more random thoughts from the races:

I was talking to someone in the know about the tracks this year and how I think, after me being the guy yelling about having longer mains that maybe, just maybe, we need to go shorter than that now. There’s no doubt in talking to the riders that the tracks can’t seem to hold up for the longer mains. We’re getting some 27 and 28 lap races in 450’s now and combined with 250’s, we’re having probably 20-30 extra laps put on in a night. This person was saying the track crew has 12 fewer minutes than in the past to maintain the track during the night. So that doesn’t help either, I know it’s for TV and/or moving the show along purposes, but I definitely don’t think we need any less time for the track crew to go out there and try to fix the track.

I don’t know about the 20 minute mains anymore if we can’t get tracks above the 51 or 52 second lap times. Something I think needs to be adjusted at some point and I can’t think of too many riders I’ve talked to who don’t agree. Too much horsepower on these bikes on too short of tracks haven’t always worked out.

Hope Dean Wilson can get back ASAP to the races, three surgeries I heard to fix the deep laceration he has in his bum-bum from his footpeg from a crash in the first thing (race/main). Man, Dean-O’s had a rough time in his 450 career and this is the latest.

Justin Brayton came back, went 7-7-7 for 6th, and also said after the race that if Weege needs his hamstring or whatever for his ACL surgery, he’s there for him. Now that’s a team!

Poor Troll. Again, his lifeless little Troll body was run over. Last year it was his brother, this year it was Alex Ray. Poor Troll.

Wow. Enzo Lopes got lucky there to be ok after heading off the track onto the concrete basically upside down on the second lap. Amazing he got up and finished. Also, Tenders about ate his last tender there but he remained unscathed.

The Islanders have been killing it. Ryan Breece was crushing it until he crushed the bridge in the third race. Cade got eleventh overall. Fast Freddie got a top ten, and these guys keep rolling along. Oh and the 722 came back!

We had another live show this weekend. At the first one this year in Minneapolis we cut a guy’s ponytail off that he had been growing since the mid-90’s, at Seattle we had a push up contest, and this week at the Motocross Museum, we had a guy propose to his girl on stage. Yep, these things are really happening.

Thanks for reading OBS, appreciate it and email me at matthes@racerxonline.com if you want to chat about this or anything else. See you next week—it’s speedway time!