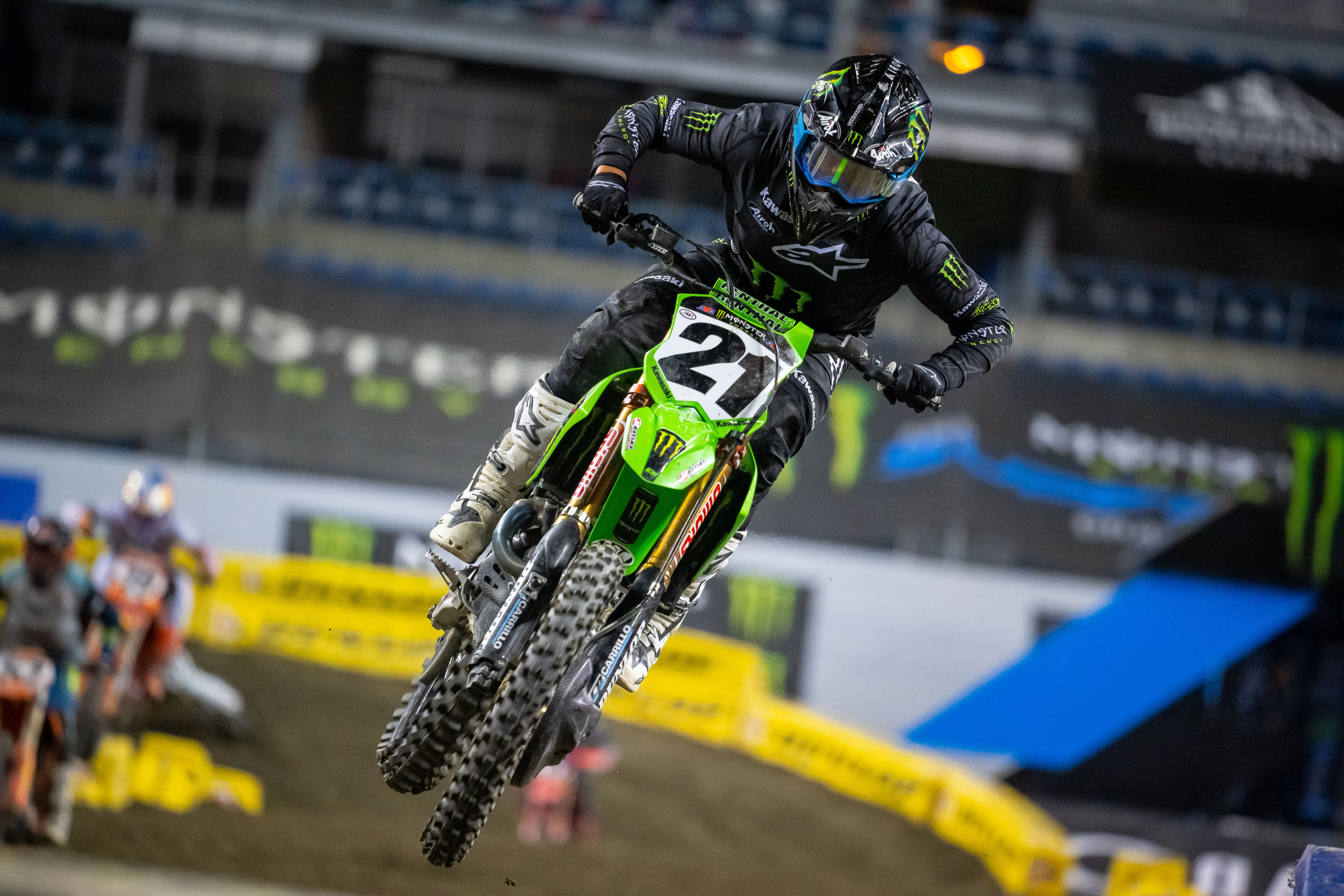 By now most people probably know that Jason Anderson’s persona is not what he’s actually like behind the scenes. He might look like a free spirit, but he’s actually a thinker, and when you can pin him down for an interview or conversation that becomes clear. We caught up to Jason at press day Friday before Seattle and hit a few topics, including the recent narrative that Kawasaki isn’t flexible enough (which has been created since the Tomac camp moved to Yamaha and John, Eli’s father, said Kawasaki was too conservative), the recent races and crashes that have cost him tons of points, and his own goals for the season…and beyond.

Racer X: You have this great persona, you come across well, but I know you’re not regular Q and A interview guy.
Jason Anderson: [Laughs] Yeah but I’m here for press day. If I want to ride, I have to do it, know what I mean? Part of it.

Did you miss any riding time after the crash in Detroit or was it back to the normal schedule?
I was basically on my normal schedule, but at this point I don’t think missing a few days is going to matter much.

Might it even be good?
It depends. I think in the long run if you miss a couple of days of riding it’s not the best for your fitness and your base, stuff like that. But I don’t think missing one day on the bike is going to hurt you. You hop on the spin bike for an hour and make up for it.

So, when you won the heat last week was it a surprise or no?
I felt fine. Detroit was good but I crashed, and last weekend [Indy] I felt like I could have done really well. My heat race was good and in practice I was P2, so it was just another weekend. I’m just realistically trying to learn this bike more. I haven’t ridden it on any of these terrains so it’s a process. I think the hardest part for me is going from a steel frame to an aluminum frame.

It’s weird because you were so good right of the bat on this bike that it made it look like you were dialed in. But you still feel there are places to go?
It still catches me off guard at times. It surprises me good; it surprises me bad. But at the level we’re at we’re able to adapt when we’re uncomfortable. I feel like the team has done a really good job with that.

And the team has given you flexibility? The narrative out there now is that Kawasaki doesn’t give the riders flexibility. But I’ve talked to Bruce [Stjernstrom, Race Director] about this and he says I could ask Jason or Adam [Cianciarulo] and they will say the team will let you guys make changes. There are options? The team is flexible?
Yeah. I feel like Kawasaki is very transparent. I’ve been transparent with them, but I don’t feel like I’ve not been transparent with other teams I have been riding for. It’s just, [on past teams] maybe my transparency isn’t what they wanted. I feel like right now Kawi really trusts my effort and everything I want to put in right now.

Have you tried some things and then ended up going back to where you started?
Yes. There have been weekends where we tried different forks and stuff in practice and then went back to our base. But I think of it as, even if we don’t run it, I learn a lot from it. I’m thinking more long goals from this, as far as bike setup. Sometimes, too, I get confused with the different feeling in the bike. Is it the chassis, is it the fork change? As far as interpreting what I feel.

Have you always had this level of knowledge? Did 22-year-old Jason Anderson have this kind of feel or have you had to learn it through the years?
If I’m being honest, I’ve always had pretty good feel as far as my bike and everything like that. What’s cool here is I feel like this team really trusts me and they allow me to use my brain and be right there with them when we’re at the drawing board.

So just a few weeks ago you were only three points down in the series. I’m sure it’s a bummer to have lost this many points. But you’re not just thinking about each individual race and each individual point, only. You’re also thinking about the long-term gains and making progress each week for the future.
Yeah, I told Kawi when I came in, I said yes, I really believe when you come over to a new team you can have [early] success, but the long-term goal is still there, and I really want to just focus this year on progressing every weekend, and learning. Even if we have a bad weekend, we can focus on that goal of in year two and three really having a shot at one of these championships. So yeah, it’s a bummer that it [the points] was really close, but the thing I want to remind them of, and they’re on board with it, is long term success is what I’m looking for right now. I always tell them, “short term losses for long term gains.” But at the end of the day, it sucks the situations that have happened the last few weekends! [Laughs] It sucks, and nothing I can say to myself is going to make me feel better about that! [Laughs] It is what it is, I’m just trying to enjoy it and they [the team] are helping me.

This is interesting. So, you’re 29 now. I get the sense you’re thinking more long term now than you were a few years ago, when you were younger. That’s what I sense.
Yeah, it’s true. At that time, I wanted to win one [a title] and that would be it. That was my goal, and I didn’t think much past that. Now I’m definitely thinking a lot longer. Because…dude what the hell am I going to do with my life if I don’t race dirt bikes?

There are some riders, and I’m not going to name names, but they’re two or three years younger than you and they’re struggling. You need to tell them, “Hey man, I was there, and trust me in a few years you’ll be back enjoying it more than ever. You’ll see that you won’t want to give this up.”
[Laughs] No, no, I want to see them struggle!