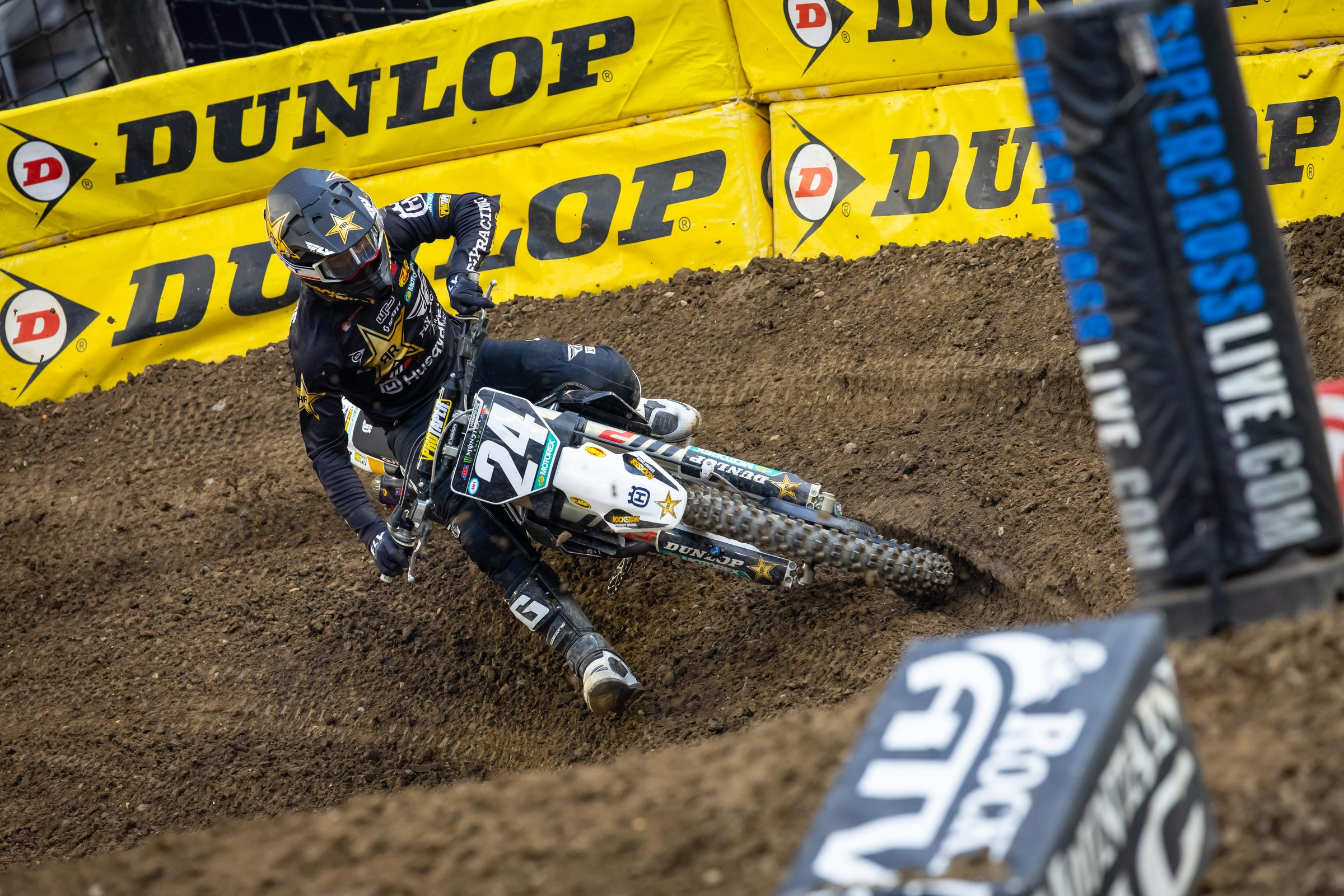 RJ Hampshire won his heat race at Saturday’s Minneapolis Supercross but couldn’t convert a good start into a podium as he sat in the shadow of Jett Lawrence, Austin Forkner, and Cameron McAdoo for much of the main event. His fifth-place finish left him a bit frustrated, but the championship picture remains solid as he puts the opening round behind him. There were several riders who felt extra fatigued similar to Hampshire after Minneapolis which appears to have been a carbon monoxide situation and Hampshire admitted breathing throughout the main was an issue. Following the main event, I caught up with Hampshire to pick his brain on his night, the fatigue, and the impending title fight ahead of him.

Racer X: Look, you’re probably not stoked, but dude, deep field, and I guess just one of those nights?
RJ Hampshire: Dude, I looked like a pansy there for a little bit in the main event. It was almost more embarrassing, because I train my ass off, and it looked like I was fading bad, and you could tell. I hit the ground enough today, and yesterday, that dude I’m being a bitch again. I couldn’t breathe, my stomach was in such a notch, and I couldn’t breathe. We were just in a goat trail. We were just following each other there for a bit and I couldn’t breathe, so I was like, “Okay, I’ll just kind of chill a little bit. Let’s kind of regroup here.” Then I hit neutral off that double, whenever J-Mart [Jeremy Martin] got me. And then of course, my breathing made it even worse. So now it’s like, “Okay, get your shit together here for the next four laps or whatever and try to make a push to the end.” I did it again, I kind of pulled back in. J-Mart and I both got screwed on that medic flag over the triple.

There was a guy down in the turn afterwards.
But the guys up front didn’t get it, it came out for me and J-Mart, and by the time we went over it, there was no one down. Dude, when you roll a triple like that, five seconds, see ya!

We were all kind of like, “What are those out for?”
So that was a bit frustrating. I mean, all in all, we were all right there in the end. My fitness is not an issue and it looked like it was there mid-race so I’m just glad that I kind of pulled it back for a little bit because I usually can’t do that. So, I actually tamed it back a little and was like, “Okay, get your shit together and let’s figure this out.” This first round was better than last year’s. I ran second, went to third, crashed, got fifth. So, speed is better. I don’t feel like far off really. It will be a battle between us five. Like we were all right there at the end.

I was just talking to Pierce Brown a little bit and yeah, it’s a deeper field than we’ve seen in a while back here. It’s kind of one of those things where like all day long I thought you looked better than Cam [McAdoo] but he ends up on the box. He gets a start and runs up there, so I think it’s one of those things. And this track, kind of simple for you guys a little bit. One rhythm that defined it and the whoops maybe?
Yeah, and that’s another thing. I wasn’t great in the whoops. I would lose Cam in the whoops, and Forkner was right there also. We were kind of just right there and they were better than me in the whoops and then I was better the rest of the track. So that’s where it’s a bit frustrating. I made a pretty big gearing change after first practice today and that brought my whole wheelbase to a different spot which I felt like helped my tightness in corners. My corners were solid all day, I was popping those threes pretty easy. So, it made up for the rest of the track, but you lose it in the whoops whenever you shorten up the bike like that. Start was good. All in all, I mean I hit the ground a lot.

So, when you do that yesterday [Friday]. You have one pretty good one and one into the Tuff Blox. And then today the same thing. Was it kind of… you’re a veteran and you’ve been around, you know what it’s like to crash, no offense, but do you get rattled by that?
Yesterday I was pissed. I was literally telling my teammate, “Yo, just go out there and chill.” And that’s what I was doing, just chilling and riding. Then I see Jett pop it, Forkner pop it, alright, let’s just pop this thing. As soon as I sat into it, it shot my left and right into the Tuff Blox. So, I was pissed off then and was like, “Dude whatever, forget it.” I feel like I have the speed to be the fast guy. We’re all so close but I know I can be that fast guy and that’s kind of where it was getting me in those practices. Like if you saw my ideal times, I was the fastest guy by quite a bit. So, it was just put a lap together, put a lap together. And that’s why I was trying to hammer it because we’re pushing the edge.

Well with you, effort isn’t sometimes the issue. You’ve got to back it down a little bit to be smoother right?
Yeah, that’s what was frustrating on the whoops crash where I stepped out. Like if you watch it, I was already going off the face of the triple. I was straight as could be, and my whoop speed was so fast, just literally one kick and I had to lay it down on the face or else I would have been in the mechanics’ area. So, I’m not bummed on the whole weekend, there was some good. My heat race was pretty solid. I took that one and kept it calm and was able to push. I was kind of just bummed on how I felt. I haven’t raced supercross in over a year now because I had two races last year and they were both shit. So, I don’t know. I shouldn’t have that feeling.

You’ve got show us “experts” wrong. That’s what you’ve got to do.
Exactly. And it’s not just that. I don’t think I’ve ever felt like that on a dirt bike track before. My body was shutting down. My whole stomach was in a knot. I couldn’t breathe but you’re trying to catch your breath as you’re still racing and every mistake you’re making is making it worse on yourself. So hey, we got out of here pretty solid. I’m not bummed on the night, but a little bit bummed on the mid-part of my main. My mid-part of my main was the worst part. At the end there, I was solid. I caught back up to everybody and tried to make a pass. We weren’t really passing that much out there today, especially in the 250SX class.