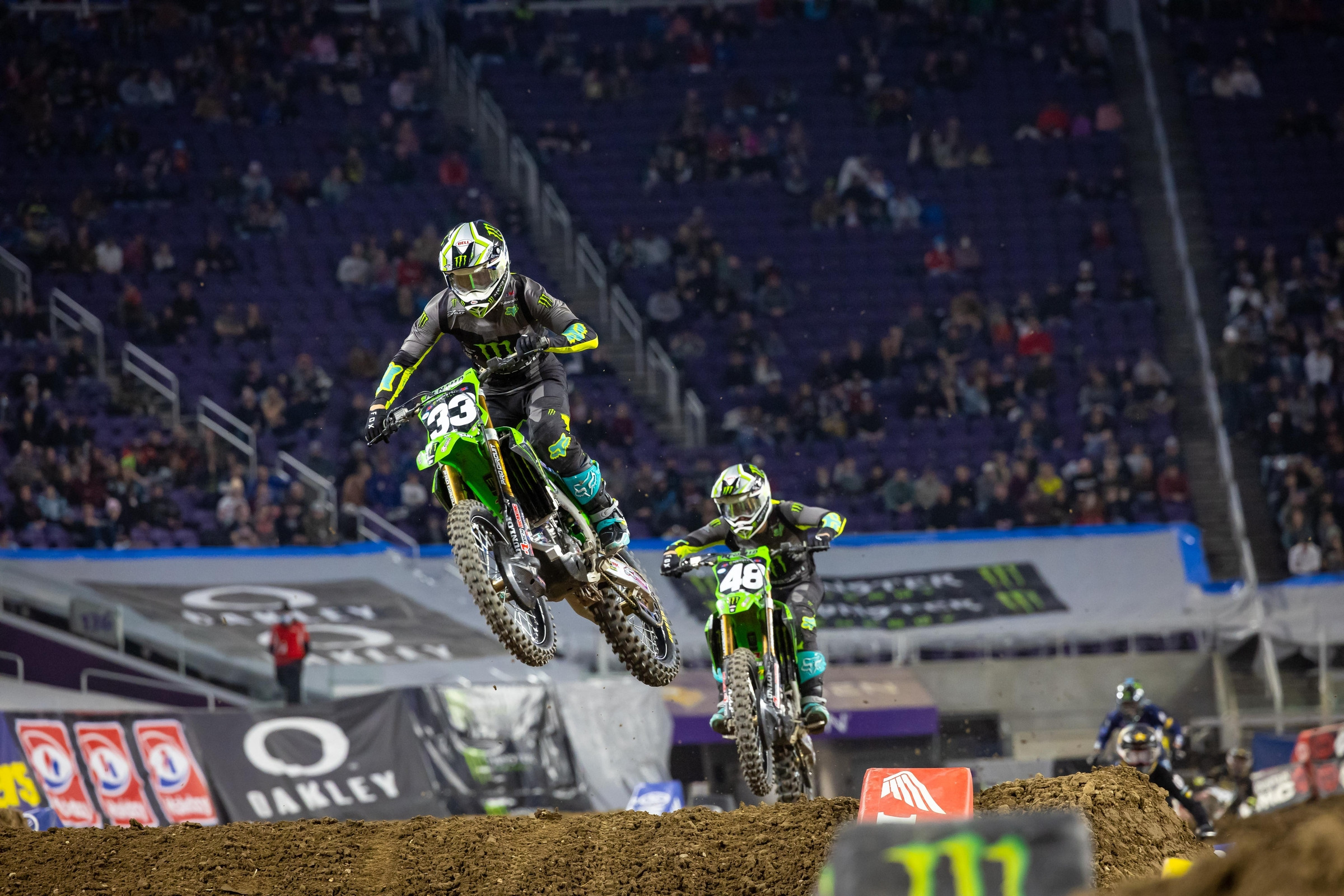 Things started out horribly for Monster Energy/Pro Circuit Kawasaki at the opening round of 250SX East when rookie Jett Reynolds broke his wrist on Friday prior to the race. Fortunately, it was all up from there as Austin Forkner and Cameron McAdoo carried the flag and landed on the podium in second and third, respectively, on Saturday night. After the main event was over, both Forkner and McAdoo spoke with the media about their days in the post-race press conference.

What are your thoughts on how stacked this class is?
Austin Forkner: I think it makes for good racing for the fans. That’s pretty much who we do it for, essentially. That’s who we’re performing for, basically. So, that’s important. I think whenever it kind of turns into a runaway, and nothing against the guys on the other coast, but after the last race Christian [Craig] has got a big points lead. So, I think when it turns into that, I think people lose interest a little bit. So, it’s good. I think we have a stacked field. Obviously, you want to be that guy that runs away with it. You don’t want it to be close. I think it will be a good season with all of us if everybody stays healthy. I think it will be a lot of good racing.

Which was scarier tonight, the rhythm section that almost took you out a few times, or when Phil Nicoletti rolled back up on you after the heat race after you almost took him out?
It was definitely that rhythm section. I wasn’t really worried about Phil. I knew that he was heated obviously, so I was just like, “Yeah, man. My bad.” It was kind of a racing incident. I just remember it. We were in opposite rhythms, and we just came together. It was one of those things. He was definitely mad. I was like, “My bad, my bad. I should have used my head better, whatever.” I think everything is fine now. But that one in the rhythm was definitely… I took a couple laps after that. I don't know if you saw me get passed by a few more guys after that, but I had to take a breather after that one.

You didn’t make eye contact. You were a little shook that he was all over you.
Yeah. I was just like, “My bad, dude. My bad.” I’m already mad that I didn’t ride good in the heat race, so let’s just keep it moving.

Last couple of days you’ve mentioned these bike changes being a pretty big deal. You mentioned it tonight on the podium, as well. Getting off the start and not having the bike there beside you. Can you allude to what these changes were and maybe why they didn’t choose to make that change last year?
I think last year at the time we were just more focused on because it was a brand-new bike, and with a brand-new bike there’s a lot of stuff to go through. At the test tracks, maybe my starts weren’t really an issue, just doing starts at the test tracks and stuff. Lining up on the gate then they did become an issue, where this year we already had a good base setting and we did make adjustments from there, but it’s not like we had to start with a fresh bike. Starting with a fresh bike, you’re going to miss something. You’re either going to come in with the setup not quite… It’s just hard to nail everything starting from a fresh bike, and especially since COVID[-19] hit it’s been even tougher to get parts. So, we definitely came in, I felt like at least for me, under the ball last year with a few things, but definitely with starts. I made it a point to really iron that out this year. I feel like at least that main event start was really good.

You got a good start and ran pretty close to Jett for a while. Was there a time or a moment where you decided to ride it in for second, or were you going for the win the whole time?
No, it was probably four minutes to go, maybe three. I made a push, and we were yo-yo-ing a little bit up until about the ten-minute mark. I made a push, and it was just tenths. In practice, there was like ten of us separated by like a second. So, I knew it was going to be a close race like that. It was going to be a tenth here, a tenth there type of race. That’s pretty much what it was. I made a push about halfway to maybe eight to ten-minute mark and reeled him in a little bit, and then he kind of matched it. That was one of those things where I think I was a little off pace in the whoops, but my line was working. I didn’t feel like it was necessary to change it, and to just take a risk on doing something like that. It was a good race. I was happy with my start and happy with the way I rode. I did just kind of bring it home a little bit. Trying to see where Cameron was at and obviously make sure he didn’t catch me. I went into management mode a little bit, but it was still a solid race. I just didn’t feel like doing anything stupid, especially that sketchy moment. Just kind of an all-around not great heat race, either. Just smoothed it out for the main.

Was there any one thing you could look at from tonight that you can work on going into next week? Anything that stands out in particular that can potentially help you get up there and put more of a challenge up for this win against Jett?
Maybe just have a little bit of a better pace at the beginning. That was really where he got me. Then after I settled in, that was kind of a consequence of how I rode in the heat race and how that went, with me trying to kind of put that good pace together at the beginning and making a bunch of mistakes. So, I kind of just took my time, settled in. It was a game of tenths, so it’s not really one thing. I feel like maybe I could have been a little bit better in the whoops, maybe. But that’s really the only place where I felt like maybe I was actually losing a little bit of time. I nailed that one rhythm that was hard I think every lap except for two. So, that’s about as good as you can ask for as far as being pretty consistent. So, not really one thing. Just a little bit of a better pace and to be honest, just getting the first race jitters out of the way.

What are your thoughts on how stacked this class is?
Cameron McAdoo: I think it’s great. Obviously, there were a lot of fast guys. It was nice to get everyone through it good tonight. We still have everyone, which is great. It’s always good to race all the guys. I think it’s pretty stacked. Even the West Coast, there’s some fast guys still there, too. It’s deep. I enjoy racing these guys and look forward to a lot more racing with them.

This track seemed like it was somewhat difficult to make up time. The dirt was taking a lot of people down in the heat races and in qualifying today. Once you got into the rhythm of the race, was it just a matter of setting in and we’re going to get through this first round and survive?
Yeah. Honestly, I didn’t really feel like survival mode. I felt like I was actually still trying to make a push for Austin. I did make one mistake just past halfway that I think kind of put me off the back of him and Jett pretty far. The heat race, I started really far back. I got pushed pretty wide. I didn’t come through like I felt like I should have. So, I really was focused on locking in the start. Like you said, we had 20 laps. It was a lot of laps, and the track changed a lot. So, it was really important to lock in. I don't think you could say that you could just try and survive and get through this track, because with that mentality, I feel like that’s what could have put you on the ground. Such a small, little thing would be pretty catastrophic on this track. So, it was big on locking in.

Let’s just talk about the nicknames and stuff like that. It seems like this is a thing you’re starting to try to lose from your past. How does that make you feel? When people call you that, does it get you down, or is it something you’re just trying to ignore?
It’s good stuff. I remember when Jett [Lawrence] was 12-ish when they moved to the States, and I rode for GEICO Honda, and he was just this little kid. He might have been on a 250. He’s just this kid, screwing around in the GEICO shop. “What’s up, Whackers?” So, I had it from like way before. Honestly, no. I try my hardest. That’s it. That’s the bottom line. I’m always going to try my hardest. We’re focusing on trying our hardest to clean some stuff up. I think we did that tonight. But no. I’m going to take it and run with it. I’m doing my best. I’m out here going to grind.

Obviously, it’s been a couple months since you raced because of the knee surgery and everything. Just starting off tonight like this, obviously the finish isn’t a win, but do you feel good to be able to start off the championship on the right foot here? You’re still in the fight, and not out of it this early and the hard work is paying off so far?
Yeah, for sure. Obviously, starting on the podium the first round is always great. We always want more. As a racer, you go back and you’re like, a couple times there I could have done this or that different. But it’s obviously starting off in a good spot. It’s been since essentially Salt Lake last year that I haven’t raced. So, it’s been a long time. Then I had a little hiccup in December that felt like it was pretty unfortunate. It just felt good to get back going. I struggled all day a little bit. I kind of chased my bike around and made quite a bit of changes. So, for it to work out properly in the main event and come around with a podium, it’s a great way to start and I feel good.