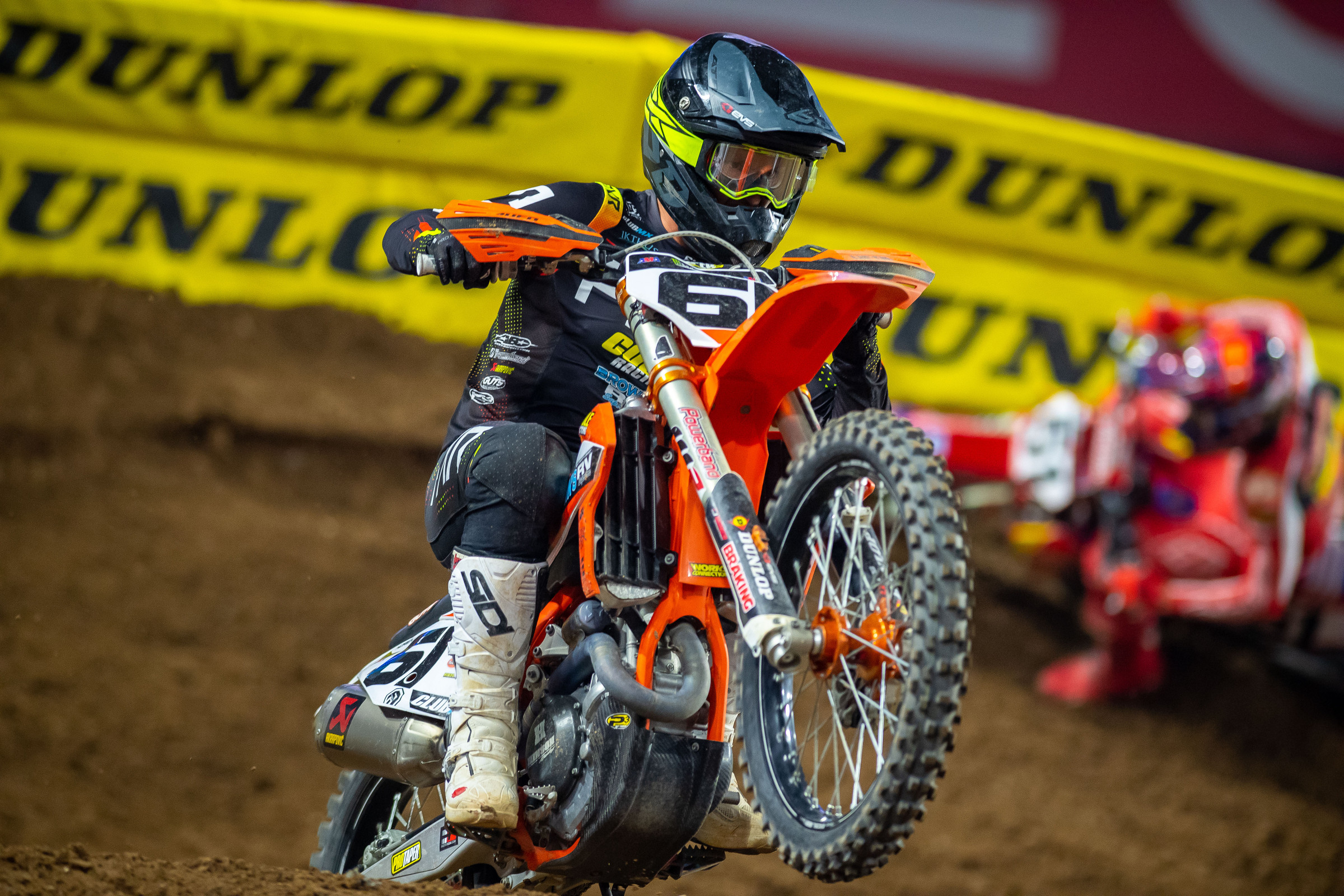 The 450 last chance qualifier is the best race in Monster Energy AMA Supercross. The. Best. Privateers put it all on the line to make the cut, which means some of the sport’s best characters get the limelight, and the battles go gloves-off with no reservations. Everyone in that race knows the score and knows the rules, which … there are barely any rules besides getting in by (most) any means necessary. There’s a brotherhood in these races, though. The passes come in mostly in 180 bowl berms when the speeds are lower, not wide open in the sand or over jumps. When someone does try to park someone in an unsafe manner, it’s frowned upon, for sure—and then the drama just ramps up even higher, which puts even more spotlight on these boys.

We spend a lot of time here studying the front half of the field. What about the riders who just want to make it in? Let’s check it out for The List.

Ryan Breece: Breece has been very good in his return to supercross this year (he missed all of 2021 with a knee injury). He has made four of the five mains this year, only missing out in Oakland when he crashed while in qualifying position. He’s gone 22-19-19-20 in the mains this year. Unfortunately, Breece’s highest-profile night was in Oakland, when he didn’t make the main. He rammed into Adam Enticknap to get into a transfer position, then crashed—then crashed again trying a last-ditch run through the whoops to make the main. Yup, LCQ craziness. Catch the fever! Breece is a regular privateer giving it his all to make mains and get a paycheck. He epitomizes what the LCQs are all about.

Cade Clason: Cade had a great bounce-back year in 2021 by becoming a main-event regular in the latter part of the season. This year he switched to the SGB Racing Storm Lake Honda team to set up weekly bubble battles with his buddy and teammate Alex Ray. Or not! A-Ray has been, um, sketchy this year and hasn’t made a single main. Cade made Anaheim 1 but then bailed at Oakland and hurt his knee. He made it to another main at Glendale. His two 450SX main event results through five rounds: 19-21.

Fredrik Noren: Most improved? Noren missed the Oakland race due to a positive COVID-19 test. He’s made the main in all four other races this year. He only made four mains in all of 2021! Freddie is a great outdoor rider but has taken his lumps in supercross. This year he’s been very good indoors. Results: 20-21-20-22.

Alex Martin: Hard to classify Martin. He is a 450 rookie but also a veteran of the sport, but not quite a full-on privateer either. He’s a ’tweener. Anyway, let’s include him in this round-up. A-Mart struggled at Anaheim 1 and also got knocked down by Clason. He has made all the mains since on his Muc-Off/FXR ClubMX Yamaha. Results read 17-20-17-18.

Mitchell Oldenburg: Like Martin above, Oldenburg is a former factory rider with Monster Energy/Star Yamaha Racing and has 250SX podiums to his name. Now “Freckle” is on SmarTop/Bullfrog Spas/MotoConcepts Honda, and while his primary goal is contending in 250SX East, he’s been solid racing a 450 in the West. He missed Oakland when his family came down with COVID-19, but he’s made all the mains no problem and his results are trending up. Could be a real contender in the 250 class starting in Minneapolis. We think it’s cool when 250 guys jump up to the 450s and show what they can do. Results: 22-15-16-15-13.

Joan Cros: We can use Cros’ first two races of the year to sum up the LCQ madness. Here’s Anaheim 1, courtesy of Kellen Brauer’s Race Day Feed:

Starling pulled away for the win with Hartranft in second, but the drama was going on behind them. Cros and Breece got into a block pass war and allowed Cade Clason to make it through and into third. Breece and Cros continued to pass each other back and forth with Breece eventually nabbing the final spot.

Now here’s round two at Oakland:

While Adam Enticknap was running comfortably in third, Ryan Breece started closing up on him and punted him to the ground for third place. Enticknap got up, clearly frustrated, and rolled around. It appeared he may actually play a factor when Breece came back around, but as Enticknap rolled through the rhythm section, Breece cartwheeled right next to Enticknap. He then picked it up behind Bryson Gardner and Joan Cros who were battling for the final transfer spot and tried to catch them.

Cros eventually made the pass in the final turn on Gardner as Breece again crashed right behind them going into the final corner. Alex Martin took the win ahead of Josh Hill, Justin Starling, and Joan Cros.

Oakland marked Cros’ only main so far this year. He finished 21st.

Justin Starling: Things started out well for the veteran Starling, who made the first two main events of the year at Anaheim 1 and Oakland. He’s missed out since. Results: 21-19.

Wellllll, I simply need to get my shiiii together …. Missing 3 in a row is embarrassing, but it’s all on me! I need to be better, these guys are epic out there! The talent level is high and I want to be up in there with everyone!

Thankful for everyone that keeps me going, appreciate you all ❤️

Kyle Chisholm: Chiz came into the season with an elbow problem and told everyone he wasn’t sure how he would do. He missed the first main of the year and things looked bleak. Don’t worry! You can still count on death, taxes, and Chiz Chizzing. He has made all four mains since, with three straight LCQ victories! Results: 18-17-16-17.