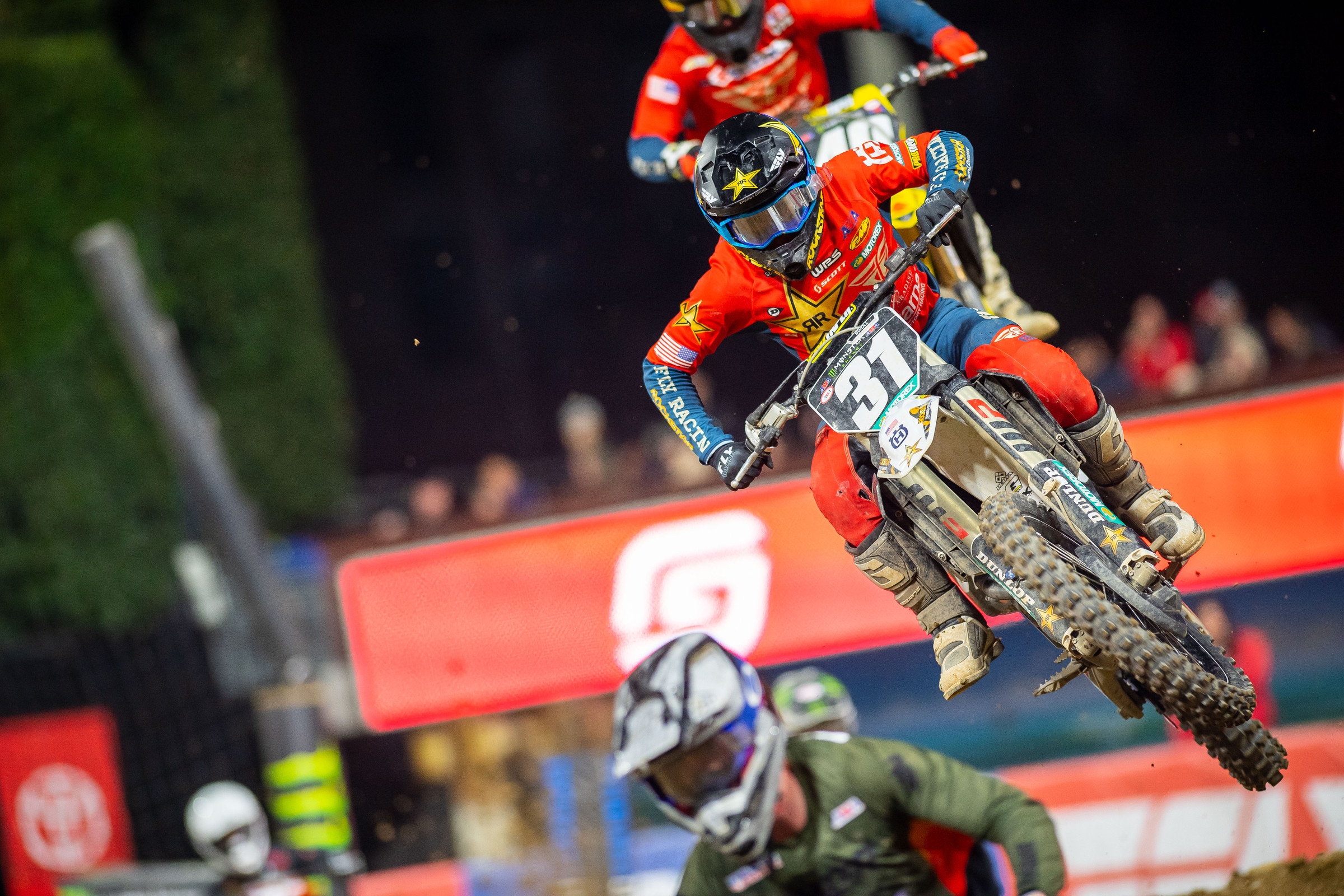 The sport collectively held its breath on January 8, 2022, as Rockstar Energy Husqvarna’s Jalek Swoll remained on the ground for several minutes following a terrifying crash at Anaheim 1. The Alpinestars Medical Crew carefully placed the 21-year-old onto a backboard and slowly left the stadium in the medical mule. Fortunately, that long 10-minute span was all precautionary as Swoll, who was concussed, was unsure if he had any severe head or neck injuries and the medical staff made sure to handle the situation with extreme care.

It was later determined that Swoll had suffered a concussion and bruising as a result of the crash. He would miss the following round in Oakland, but incredibly returned last weekend for the third round in San Diego. It was a welcomed sight to see Swoll back aboard his Husqvarna on press day on Friday. As expected though, Friday was also Swoll’s first time back on the bike since the crash.

“I’ve just been resting,” said Swoll. “Other than the head stuff, I’ve had a couple other injuries that have just randomly popped up. Obviously, the team wasn’t going to let me race in Oakland, so I took that weekend for resting, but I took this week just to kind of manage and just be ready for this [weekend]. I wanted to be out here. It’s hard watching from the couch. I would say I’m around like 85 percent right now, but I feel like with the right circumstances, everything will present themselves.”

The Anaheim 1 crash was tough to watch. After Hunter Lawrence missed jumping the first supercross triple out of the third turn in 250SX heat two, Monster Energy/Star Yamaha Racing’s Nate Thrasher moved left to avoid landing on the Australian beneath him. Unfortunately, Thrasher’s move was just enough to make contact with Swoll 40 feet in the air and swipe the Husqvarna away from underneath Swoll. When they both landed, Thrasher continued on while Swoll went headfirst into the ground. Swoll initially got to his knees before losing consciousness and the race would be red flagged.

“It was like I jammed my whole body,” Swoll explained. “The way I hit my head was just right on top and it compressed my whole body. My neck was compressed, my spine, my wrist, everything. I was pretty jacked up. But for the most part good, no broken bones. I got out of it as lucky as I could have.”

Swoll escaping without broken bones is great news, but the flipside is all of the off-season work put in by he and the team went down in that crash as well. Swoll was expected to contend at the front this season as he still eyes his first career supercross victory. Crashing out in the opening heat race of the year and losing two weeks of riding on top of that puts a lot of those goals on the back foot. For Swoll, the frustrating part now comes in that he really wasn’t able to show how strong he felt coming into this year.

“I’ve been around for—this is my third year. I’ve never been the practice type,” said Swoll. “I’ve never been fast in practice. So, I literally just have to make it to the race, and we’ll see where we’re at from there. But I think I’ll hold up good. I’ve been riding good, but obviously at A1 I didn’t really get to show anything besides qualifying and qualifying is not me. So yeah, I’ve just got to make it to the races and that will be my first step, and then we’ll see where the night show takes me.”

Well make it to the races he did, as Swoll qualified a strong seventh in his return to San Diego. Ultimately, San Diego ended up being the night of seven’s for Swoll as he turned his seventh-place qualifying position into a seventh-place ride in his heat race and eventually a seventh-place finish in the main event. All in all, it was a solid day at the races considering his lack of seat time and still bruised body to deal with.

He did end up being the first rider to finish a lap down, but he was charging the entire main event after starting in 12th place early on and slowly working his way forward into the top 10. In a race that could have easily been chalked up to just  trying to get back into the swing of things, Swoll looked comfortable pushing his pace throughout the race and has now laid himself a firm building block to springboard into the rest of the season.

“I know where I should be, so seventh-place kind of stings but it’s my first week back so I'll take it,” said Swoll in the Husqvarna press release. “I’ll get some laps in this week and work on getting my starts back and I'll honestly be just fine. I feel like I'm in a good spot speed-wise, so I feel really confident going into next week and I know I'm going to turn it up.”

So, what is the ceiling for Swoll? If he can be back boarded out of the stadium and ride comfortably into the top 10 two weeks later, there might not be a ceiling. Swoll was markedly better in his sophomore season as a professional in 2021 where he earned his first career podium at the Arlington 2 Supercross and won the High Point National three months later. His crash at Anaheim 1 this year looked like it was going to be a huge wall in his career progression, but he plowed right through it like it was just a small speed bump.

As we head back to Anaheim again this weekend, Swoll has another chance to start fresh in the same stadium. Now that he’s back to riding, testing, and training, Swoll will look to take a couple more steps towards a top five finish. And who knows, stepping onto the podium, and then stepping onto the top step might still be in the cards this season. Quite incredible to believe if you had said that to anyone who was watching him just 18 days ago.