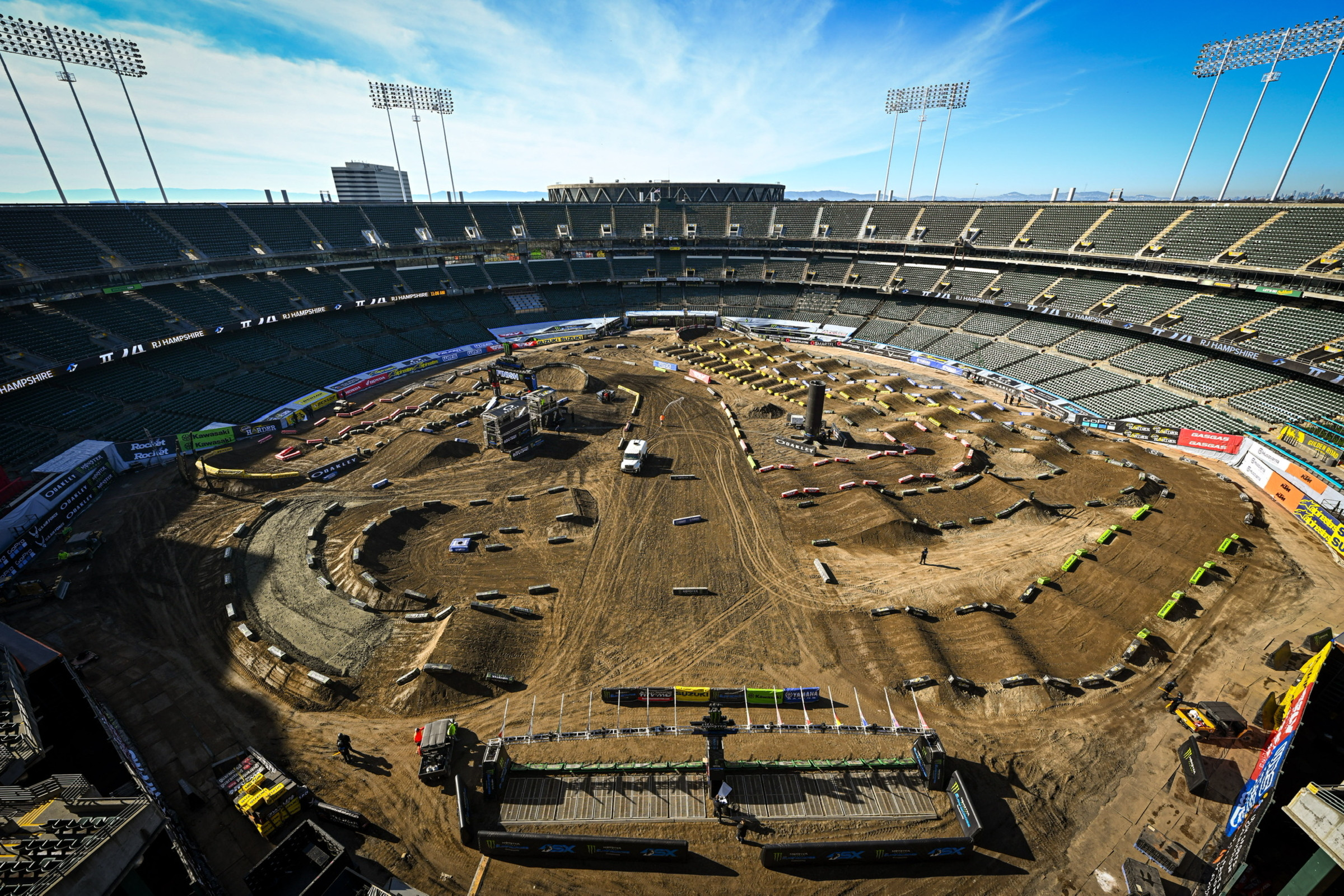 Welcome to Racerhead, just nine more months until the off-season… Kidding. What a great start to the 2022 Monster Energy AMA Supercross Championship! While the race for the wins in the main events weren’t particularly dramatic or exciting, everything happening behind winners Ken Roczen and Christian Craig sure was. And with a nearly packed Angels Stadium welcoming the fans back, it seemed like old times for supercross, and that was a very cool thing. But as I mentioned last week, I had to skip the opener, so rather than hear my takes from my living room couch, let me throw it right over to Jason Weigandt and Steve Matthes.

Footage Was Too Good (Jason Weigandt)

Media isn’t always fair. Or maybe you think it’s never fair? After the race on Saturday Malcolm Stewart got all up in Marvin Musquin’s grill and screamed at him. Marvin eventually fired back. We gave it extra coverage because I don’t think TV caught the argument, and because the general chaos of block passes and knock downs was a real theme of the event. We didn’t know a video of the yelling would emerge mid-week from Fly Racing’s videographer. You don’t get to see and hear that stuff very often, so everyone ran with it. Just like they did when similar footage surfaced of Justin Barcia and Eli Tomac yelling a few years ago. Anyway, the Marvin/Malcolm incident got way more attention and coverage than it would have just for the crash itself. By the way, Malcolm knocked Jason Anderson down in the same corner in the same spot in his heat race. That didn’t get as much coverage because no one yelled.

We also know Justin Barcia knocked Anderson down in the main, and Anderson said Barcia should buy some Team Fried merchandise. And Barcia did on Sunday! Two different ways to handle it and both created more coverage than just the passes and crashes. That’s just how it is.

As I said, the chaos was really the theme of the night. Eli Tomac explained to Matthes that he saw guys getting “nuked” in front of him. At Anaheim there’s always tension but often riders ride “within themselves” and try to stay out of trouble. That was not the case this year, but a lot of it was track-dependent. That one bowl corner was the best (and only) chance to make a move so dudes were sending it in there and stuff happened. What you really notice at the opener is that it’s almost impossible to keep track of it all. Early in the race you have Roczen, Chase Sexton and and Adam Cianciarulo out front, with a nine-rider (!) freight train behind them trading spots. You steal a glance at Kenny or Chase and boom, someone goes from fourth to sixth and you don’t even know how or why. That’s the crazy thing about the #deepfield at the beginning of the season. There’s too much action to watch it all.

Unfortunately, it probably won’t keep up quite to that level all year but you have to enjoy it while it lasts. You figure the Yamaha boys (Tomac and Dylan Ferrandis) will want to step up this weekend, Sexton is out for vengeance, Anderson, Musquin and Stewart likely feel they would be better if they don’t crash, and on it goes. Lots to talk about, and that pack is gonna be thick with action again. Can’t wait!

Look, I know Anaheim 1 just happened and we saw all the riders on the new bikes and teams but guess what? I still have more questions! Not much was answered at Anaheim 1 right? The usual suspects were their usual fast selves, and not that we would make massive judgements after one race, but there were three vets in the top three in 450SX, the kids made mistakes, and the guys on new bikes/teams didn't get massively improved finishes.

BUT, I was really impressed with Malcolm Stewart out there. The Rockstar Energy Husqvarna Factory Racing rider is in great shape, he was really fast and it wasn't his whoop speed that got him to the top of the charts in qualifying, it was just speed everywhere. We all saw how mad he got at Marvin Musquin for that aggressive pass in the main event and that's fine, you have to expect that and I'm fine with what Musquin did. That corner was the one spot where we saw a lot of passes happen and that's SX racing. But I really think Mookie can win a race this year, not saying he will, but I've never been one to believe he can actually win. I think he can now.

Other than that, I still have a lot of questions about a lot of riders out there.

Like pretty much everyone else in the industry I was totally bummed for Colt Nichols when he suffered that horrendous crash in his heat race at Anaheim. Last year’s 250SX East Region Champion, who switched coasts with his fellow champion (250 West) and Monster Energy/Star Racing Yamaha teammate Justin Cooper, broke both arms and got a serious burn on his back in the crash. He posted an update earlier today:

What’s unfortunate for both Colt and Justin Cooper is that by the way the current rules are written, both have to move up to the 450 class next year. They are given one year to defend their title, but neither even made it to a single main event because Cooper broke his foot last week. Now their prospects for finding a factory ride in 2023 probably depends on what happens to others, as there isn’t a lot of room at the inn in regards to 450 rides, especially for two guys that won’t be riding for the rest of supercross.

No matter, here’s a get-well-soon for both Colt and Justin, hopefully see you both this summer.

I talked to Ryan Breece this week for the Privateer Island pod and caught up to him on his Anaheim 1 main event. Breece missed all of last year with a knee injury and he talks about that in here. He in fact even decided that he was done racing, entered some online school, but at some point needed some money and entered a dirt bike race against a horse! Yes, I'm serious, it was some sort of barrel race and he beat the horse by a second or so and took home the cash! That spurred some thoughts on racing again and the one time Twisted Tea HEP Suzuki rider and Cycle Trader Rock River Yamaha rider put together a program with a dealership, some fans, a German mechanic, and he's hitting the road! You all saw how pumped he was to make the main event in that LCQ? That was pretty awesome. Anyway, here's the show for you.

Last Friday as we were posting Racerhead we learned of the passing of the legendary Hollywood actor Sidney Poitier, the groundbreaking actor who became the first African American and first Bahamian to win the Academy Award for Best Male Actor for the 1963 film, Lilies of the Field. He was also well-known for film roles like Guess Who's Coming to Dinner, They Call Me Mr. Tibbs, To Sir with Love, Blackboard Jungle, and The Defiant Ones. Later in his career he directed some top films like Stir Crazy, starring Richard Pryor and Gene Wilder.

So by now you're probably wondering what in the world Sidney Poitier's passing had to do with motocross and supercross and why I would even mention it here. Well, last Friday Racerhead reader, James Noble, suggested we mention Poitier's passing and his 1973 film A Warm December, which Poitier directed and starred in, because it's about an American doctor named Matt Younger who moves to England to race motocross!

Turns out that Sidney Poitier, like Steve McQueen, was a true motorcycle enthusiast, and he found a way to bring some of that passion into the movies. Godspeed, Mr. Poitier.

This weekend marks the debut of the SX Futures program racing on the full SX track and like Filthy Phil, I'm not a fan of this. Sure, there will be a couple of dudes who will be fine with the track and have the suspension setup needed to traverse a full-on SX track. The rest of the kids? Yeah, probably not so much. I saw the rule that said the riders have to be within 115 percent of the leader in order to be able to line up and I suppose that's a good thing but man, I do not think the majority of these kids are ready for this. And if Feld decides to tame down the normal SX track for the kids, well that's just ridiculous and hurts the show that we all came for. I dunno, count me out on this idea but I suppose we'll see how this goes. (NOTE: The SX Futures practiced today at Oakland; hopefully it helped the kids get used to racing on a professional-grade SX track.)

With SX Futures getting relaunched tomorrow, with some of the country’s fastest young 250 riders getting a crack at a real supercross track, I wanted to remind folks of the upcoming Ricky Carmichael Amateur Supercross at Daytona. While not a round of SX Futures, nor one of the American Motocross Majors, the RCSX has grown into quite a fun spring-time event. It starts with Saturday night’s Daytona Supercross, then two days of amateur racing on a tamed down circuit. And then on Tuesday it’s the Vintage Supercross on an even more tamed down track, hosted by Jeff @6Time Stanton. To me, that Tuesday event is underrated because it’s more fun and loose than the previous days’ events, and it also offers classes for modern bikes, not just vintage. I was thinking this might be a cool race to have a Steve Matthes-vs.-Jason Weigandt-vs.-Jason Thomas-vs.-Sam Nicolini-vs.-Mitch Kendra-vs.-Aaron Hansel-vs.-Kellen Brauer-vs.-Ryan McLeod-vs.-Jessica Coombs-vs.-Tommy Tenders-vs.-any other journalist or industry friend who wants to line up-vs.-me match race, with one caveat: Jason Thomas would have to be on a vintage bike. Here’s more on the Vintage SX. It should be a lot of fun!

VIEW FROM THE COUCH (DC)

Finally, here are my off-the-cuff takes on Anaheim 1, as viewed from close to 3,000 miles away, on my living room couch…

And here’s two bonus takes, unrelated to Anaheim, but nevertheless:

Head-Scratching Headlines of the Week

“In a First, Man Receives a Heart From a Genetically Altered Pig”—New York Times

"The breakthrough may lead one day to new supplies of animal organs for transplant into human patients."

“Pig Dies Waiting for Transplant Heart Given to Human”—The Onion

Thanks for reading Racerhead. See you at the races!