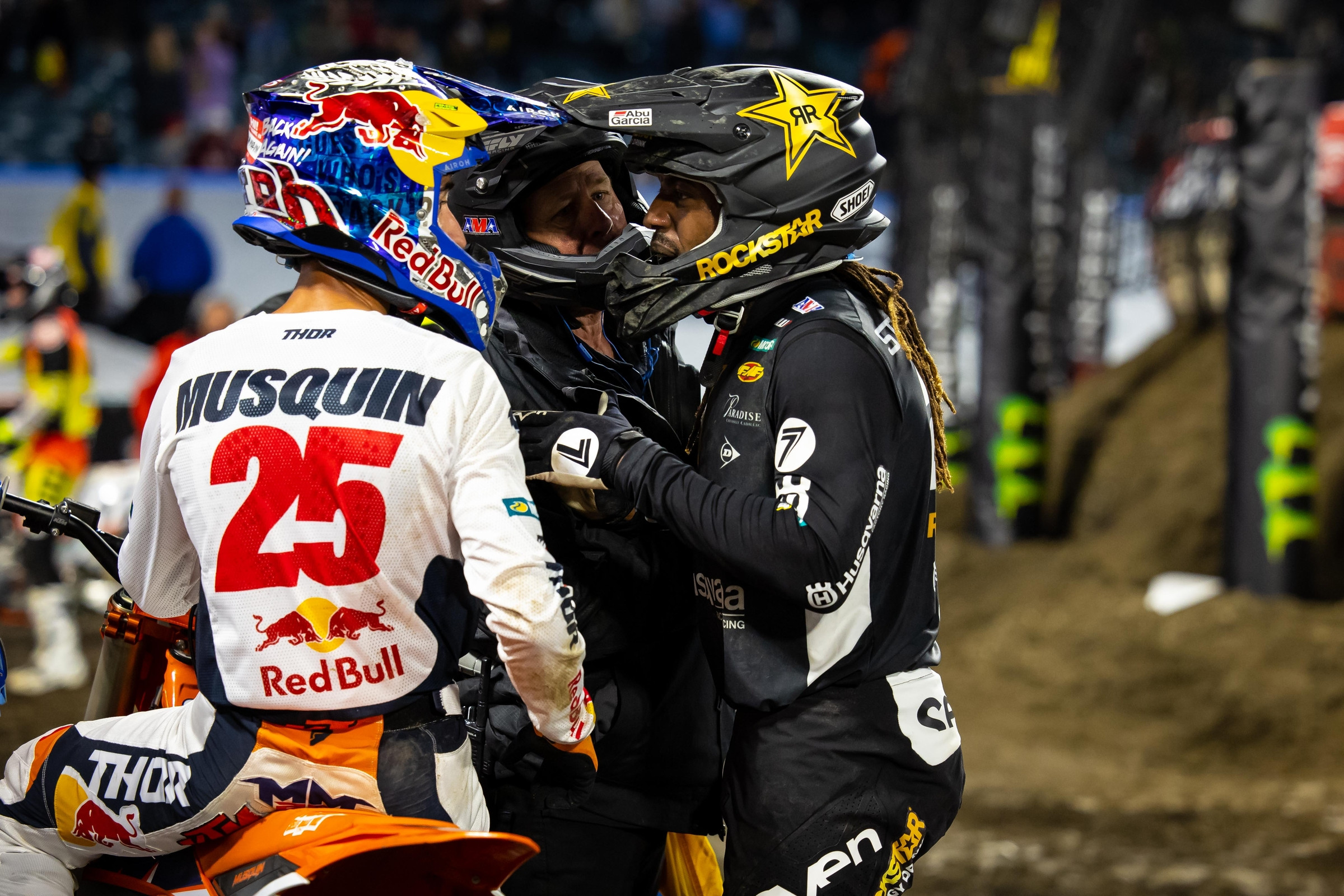 The Moment Decoding the Drama

He held in the rage for ten laps. Ten minutes of negotiating a broken-down supercross track, blitzing whoops and jumping rhythms filled with ruts, edges and bumps. He ran the pace of the best in the game and even logged the fastest last lap of the race. He stayed in the moment, but also had something else in the back of his mind.

As soon as they crossed the finish line, he got back to business. The other business. Malcolm Stewart was very angry at Marvin Musquin, he just needed to wait 10 minutes to finally get the race finished so he could argue. He rode right up to Musquin, who had just survived an epic late-race battle with Chase Sexton to net fourth. Before Musquin knew it, Stewart was in his face, yelling and gesturing toward the turn where they went down.

Earlier in the race, Musquin tried to pass Malcolm by diving deep up the inside of a bowl berm. That decision ended up bad for both, as both riders went down. What exactly happened is the perfect block pass/bench racing fodder, as most would say Musquin dove in too deep and was too aggressive and took them both down. A few will say Malcolm should have checked up to avoid running into the back of Musquin. Either way, well, that’s just your opinion, man.

What happened after the race is less debatable. Malcolm was hot. Here’s what that means: there’s a real passion here, real expectations, and when someone messes with those, Malcolm is going to take it seriously.

Eyewitnesses down there say that Malcolm was yelling that it is a long season and it’s way too early for Marvin to be starting stuff like that. You might note that Stewart shoulder checked Jason Anderson to the ground in the exact same corner in the heat race. Yeah, sometimes the rules don’t apply in both directions. That’s how competitors act.

That’s what we’ve always wanted to see from Malcolm Stewart. His talent ceiling is impressive, but the world always wanted to see what he could do if he put in the work. He’s done that over the last few years, changing from “Heat Race” Mookie to a solid, consistent rider in the main events. Some of the flash was gone, but that was exchanged for health and consistency. It was a fair trade.

This year Stewart signed a two-year deal with Rockstar Energy Husqvarna and started training at Aldon Baker’s Baker’s Factory complex. This is a much higher-pressure situation. On this team, with Jason Anderson gone and Zach Osborne retired, Malcolm needs to do the winning. Working with Baker only adds to it. There are no excuses.

That type of pressure could either help or harm a rider. For someone like Malcolm, who always appears to have fun but never really showed that “I’m here to kick everyone’s ass” persona, it was a real question. The bike, the fitness and the skills to win are a big part of the success. But the belief that you can do it is also key.

A lot of riders are going to get mad when they get knocked down. But Mookie getting that mad indicates something else. He was yelling with Marvin for five minutes! This mattered well beyond a regular block pass and take out.  This is going to be a good season and he was going to have a good result and Marvin ruined it and Malcolm cares. This is the reaction you have when you think every point is going to count. When you feel like you’re set up for success and someone took it away. This is an indicator that Stewart has put that last puzzle piece into place: he expects success.

The other pieces are there. Malcolm nailed the top overall qualifying time. Anaheim had two tough whoop sections so maybe it was expected that Malcolm, one of the best in the game in the whoops, would rail on that track. But when you watched him, you could see the whoops weren’t a particular strength this time. He was good in the whoops, but not outstanding. He was fast all the way around the track. It wasn’t just a whoop night.

On the fitness front, check this out: Malcolm had the fastest lap time of anyone on the final lap of the race. His last lap of 1:00.664 was only four tenths off of his average lap time. Even in a race where he had a crash and other chaos, he was strong to the end.

The result was merely a seventh, and that’s part of why he’s mad. It could have been better. He expects to be better. So that’s why he was yelling after the race. And that speaks volumes.