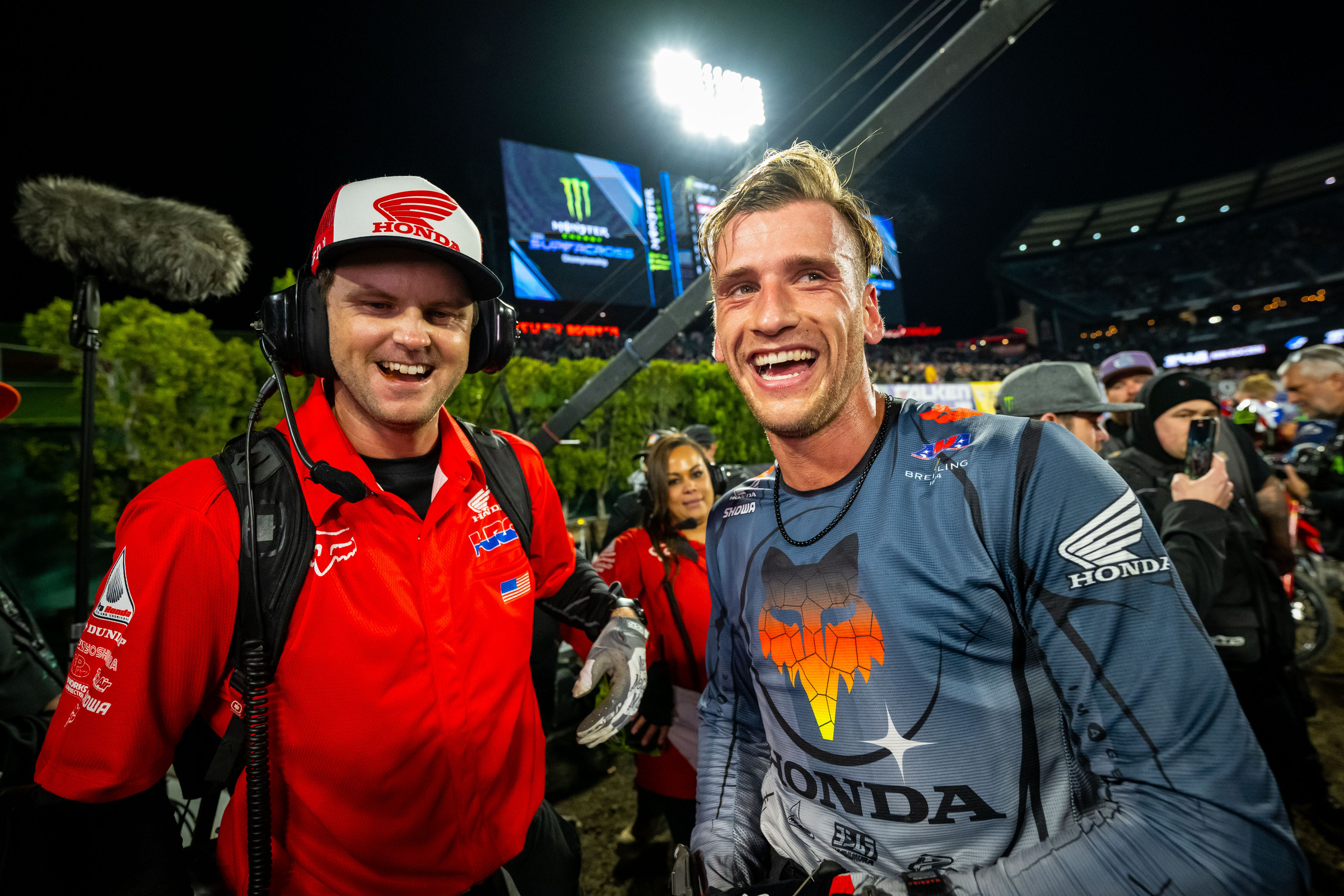 At the 2022 Monster Energy AMA Supercross Championship preseason press conference last week, Honda HRC’s Ken Roczen said his training in December took a hit after a “gnarly sickness”—that he confirmed was not COVID-19—kept him off the bike longer than expected.

“Everything was going to plan until mid-December,” the German said. “I came down with a gnarly sickness, for some reason. Kind of still battling the effects of it a little bit. It wasn’t COVID, but still battling the effects a little bit which kind of threw a wrench in our program for this December. That was a bit of a struggle. At the same time, I honestly kind of revived myself a little bit. I had a really good year in 2021. I just really made the sport my hobby again and training and everything. It just felt really good to go back to having fun and spending a lot of time at the track and trying to work on my craft a little bit.”

At the opening round on Saturday, Roczen claimed his heat race win and then he holeshot the 450SX main event with his teammate Chase Sexton right behind him. Roczen withstood the pressure from his teammate for the first eight laps until Sexton made several mistakes. Then, Roczen had an 11-second lead over Cooper Webb, and he rode comfortably home to his fourth Anaheim 1 Supercross 450SX main event win, leading all 22 laps of the main event. Afterwards, Roczen spoke to the media during the post-race press conference.

Kenny, you mentioned on the podium, December just a weird month for you with the sickness. When that stuff happens and you come into the season, what’s the expectation? Is it get through the first round? Do you still have to believe that you can win early in the day? How do you process things throughout the morning and through practice when you know that the month has been a little off?
Ken Roczen: I think part of the good thing is that I just have a few years under my belt now, so I’m generally not too worried come race time. Last year, for example, I came into the first round way different, just knowing what I got. I didn’t have as crazy of a December as I did this year. But like I said, I have a few years under my belt, and I just stay relaxed. Everything’s in me. I wasn’t really too worried. At the same time, feeling a little bit like a fish out of water. Things just clicked. I’m blown away at the same time, but I’m just happy that it went the way it went.

Conditioning-wise, did you feel any effects of it late in the race? I know you had the lead there so you could manage it, but did you feel anything?
I felt surprisingly good, actually. It just ultimately comes down to not riding a whole lot in December. It’s not that you’re necessarily less fit, it’s just when you don’t do 20s all the time, they just feel a little bit foreign. But actually, I felt pretty good. Like I said before, it was a little weird just having that big of a gap with that much riding time to go. I guess it was kind of nice, how rough the track was. It was just a weird position because you try to be a little careful, but you don’t want to be too careful. I think we managed it well.

Your teammate was all over you at one point for the lead, and by fighting him off he eventually made mistakes and he went down. Just take me through the strategy. He was catching you. I know you were probably trying to manage a little bit. Did you think, if I can just hold him off, who knows what could happen? That’s exactly the way it worked out.
The track was tricky. I was hitting the whoops pretty decently and just had overall good lines. I knew that he’s strong and he’s been super fast. I also just know how to defend well. We just had a good battle on our hands. I could defend and at the same time still do some of the rhythms. I felt like I was just in a good spot. Just eventually unfortunately he went down of course, and gave me that bigger gap. Up until then, it was super fun. I’m just glad that I got the holeshot and was leading just so I didn’t have to deal with… When you have somebody really close in front of you and it starts getting rutty, you kind of tend to not really see the ruts that well. So, I just had a clear track, so that helped me out.

It was chaos tonight. You’ll see when you replay the race that there was a lot going on behind you. With all that, going into the main event, was there any conscious decisions you made on bike setup? Change to try to be more forgiving for certain sections of the track, or as the first couple laps played out? Was there anything mentally that really caught you that you either had to be cautious about or that you were really aware of on the track that you were trying to be consistent with?
I was clicking around a little bit, but basically just went back to my base. That’s what I meant. I just haven’t really ridden that much. So then you have a tricky track, and bike setup. You’re chasing it a little bit when you ride more consistently and all the time you just kind of sometimes deal with it. So, I pretty much just left it for the main event. It’s not like I was 100 percent happy with it, but at the same time, it’s what you got in that very moment. I also think that for it being an Anaheim 1, that was probably the most brutal track we’ve had, especially with the whoops being as steep as they were. They got super cupped. The fine line of skimming and jumping. Like what Cooper said, in the end it was kind of just survival mode and trying to find some lines that are halfway decent. I didn’t click around too much and kind of just left it. Of course, there’s always something that you want to work on, but race day you’ve kind of got to pick your battles.

Considering A1 is fairly mellow, or is at some years, some years it isn’t, where the material was so different this year, considering how well you and the team and the bike handled it, does it make you more confident as we move into the series and you’ll see more tracks like this, particular of the east coast?
I think it does just because it was very rough tonight and we had very tricky whoops. We did really good. So of course, that’s a little bit of a confidence booster mentally and physically. We have a decent base. Now we’re going to try to continue to work on it and get it a little bit better, but at the same time try not to chase our tails.

You have a good gap to second. How does it feel with your past pains from the years ago and the last quarter? Have you any pains where it’s like, okay, be careful?
Generally, no. I haven’t really been in pain. My left hand has been a little funky that I can’t shake off, for the moment. It’s just little aches and pains that I normally don’t have, but for whatever reason, certain parts of the body just sometimes get more aggravated than others. Other than that, I’m pretty stoked with how my arms have been.

Like Justin just alluded to, a lot of tension, a lot of adrenaline, a lot of preseason work that’s all gone into this. So, you guys were very anxious to get on the track today. You and Chase's battle early in the 450 main event, that’s one of those where if you make a mistake, it could go either way. How was it for you to fight him off like that, kind of keep your level-headed ways, and then just keep going forward as the night went on while everything else behind you just kind of went sideways for everyone else?
It sounds like there was a lot of stuff going on back there. I was glad I wasn’t in that, but I didn’t have it easy on me the whole way. He was definitely pushing on me and trying to get me, so I had to ride defensively a little bit. I felt like I did a good job at having instincts and defending him. I just had a sense of calmness. I wasn’t stressing about anything. I was hitting the whoops fairly decent. I just did every single lap the same thing and tried to kind of roll with whatever it throws at me. Then obviously he went down. Other than that, I was ready for whatever was to come. Once he was down, I had a bit of a gap and that made things a little bit easier. Again, with this type of track, the slightest little bit of relaxation can bite you. For having that big of a gap, it actually didn’t feel like that long of a moto. Sometimes it can kind of feel long and the time just doesn’t go by. So, things just kind of rolled my way tonight. I felt good about it.