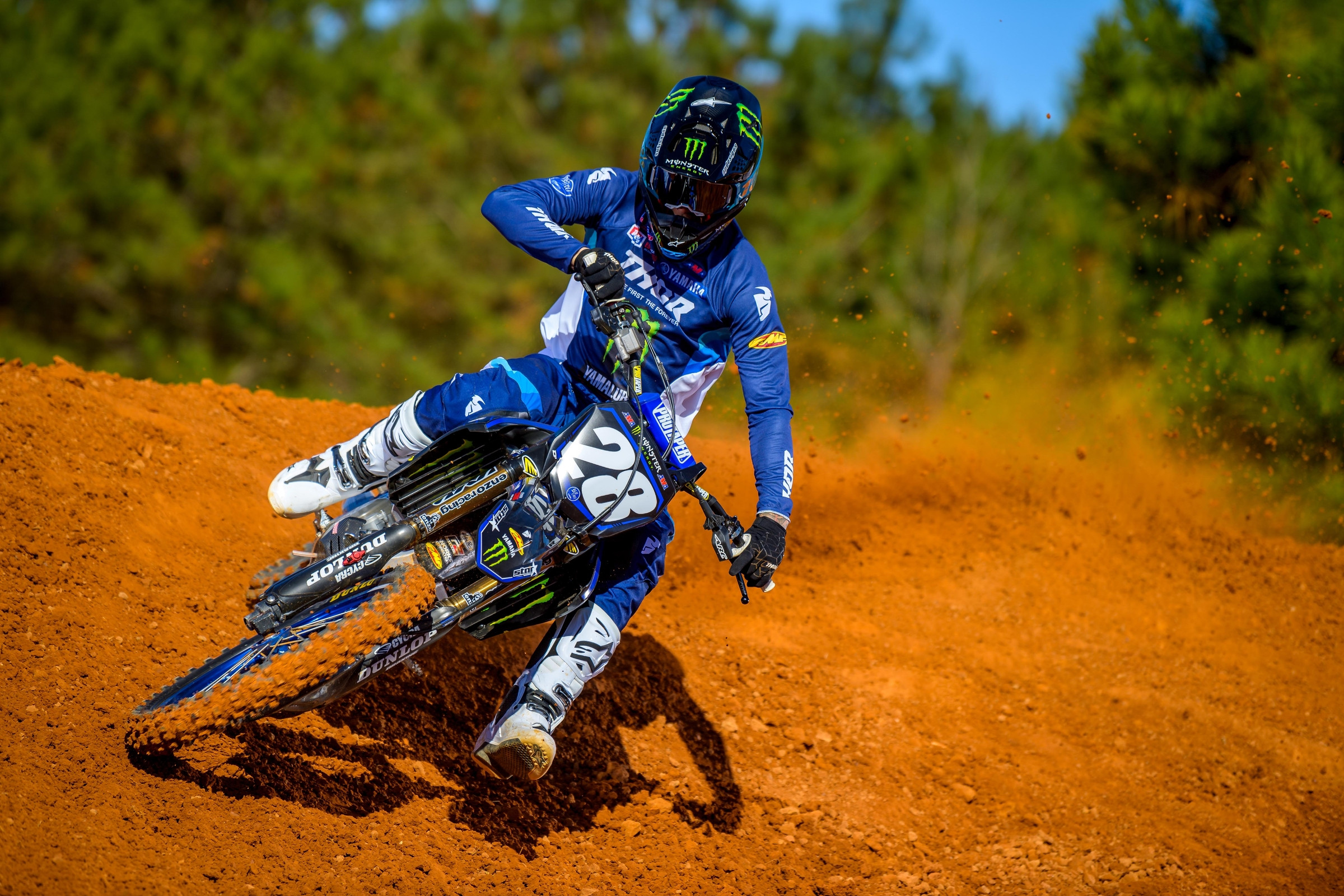 With just two days left until we drop the gates on Saturday in Anaheim, the 250SX West Region has taken shape for 2022. We now know the main group of challengers who will line up this weekend. After reported injuries for Jett Lawrence and Justin Cooper came down earlier this week, Honda HRC confirmed that Hunter Lawrence would now be racing West. Meanwhile Monster Energy/Star Yamaha Racing further confirmed that Colt Nichols was always slated to be going West, anyway. In the press conference on Thursday evening, Hunter Lawrence and Colt Nichols were both in attendance, but so too was Christian Craig, Vince Friese, Jo Shimoda, Michael Mosiman, Seth Hammaker, Chris Blose, Carson Mumford, Jalek Swoll, and Garrett Marchbanks.

Nichols comes into the West with a target on his back as he looks to become the first rider since Grant Langston in 2005 and 2006 to win opposite coasts in back-to-back years. The move to have Nichols go west left some confusion as to why Star Yamaha Racing would not have Cooper (West) and Nichols (East) defend their respective titles and run the #1 plates. Now with Cooper sidelined, Nichols’ and the teams’ plan to be ready for West has turned into the right move.

“The series of events that have unfolded the last three or four days have probably had the rumor mill rolling but this was always the plan for me to race West,” said Nichols.

He further explained that he pressed the team for an answer in late November and the decision was made to have Nichols race West. Regardless of the coast, 2022 will be Nichols’ final year of eligibility in the 250SX class before being forced up to the 450SX class next year. With that move looming this year, Nichols made it clear what his goals are.

“I want to go out on top and end this last 250 year on a bang,” Nichols explained. “I'm looking forward to the next chapter of moving up and banging bars with the big boys.”

As for Hunter Lawrence, his decision to race West came much later than that of Nichols. It was already announced that Hunter would go East as his brother Jett was all set to go for West. That is until a practice crash late last week resulted in a rib injury for Jett and the brothers announced the coast swap on Wednesday night at their press conference in Costa Mesa, California.

“I saw Jett crash and he really didn't move, and I went over to check if he was okay,” Lawrence detailed. “It was Monday that the decision was made that he wasn't feeling it and that we would swap coasts.”

The late notice could have thrown a wrench in Hunter’s expectations for the season having to go six weeks earlier than he expected. But the elder Lawrence was confident on Thursday night that the strides he made in 2021 to finish a full season of supercross and become a race winner on top of that, as well as a full off-season with no major setbacks, are more than enough to propel him into a title run.

“I'm looking forward to a good season because I've had the whole offseason to train so that's been a big difference for me,” said Lawrence. “I'm going in to fight for a championship, but I'm just taking it day by day to put myself in the best chance to win the title.”

Monster Energy/Pro Circuit Kawasaki’s Jo Shimoda also found his way onto the top step of the podium late in 2021 with a win at Salt Lake City 1. Now heading into his third year of supercross but doing so with a renewed contract with Kawasaki, Shimoda is also confident that his progress over the last 12 months will put him in contention.

"This year, we were able to start the preparation way earlier (than last year). Almost more than two and a half months,” said Shimoda. “My goal for this year, I made a lot of mistakes last year, so that should be fixed this year. I just want to be in it from beginning to end.”

When asked what his biggest change this offseason as been in terms of preparation compared to prior years, Shimoda discussed a key component to his practice regiment that he feels will push his race pace to another level.

"Last year on the speed side, I really saw what was the reality,” Shimoda explained. “This year, in practice I've been riding 100 percent every day. There's not like one day that I would ride 70 percent or 80 percent so I'm just going to bring what I do in practice into the races."

Nichols’ teammate at Monster Energy/Star Yamaha Racing for the West will once again be veteran Christian Craig. Craig and Nichols battled tooth and nail for the East championship last year with Craig winning the opening round and holding the points lead for some time. During the press conference, Craig detailed how much of a learning year 2021 was for him despite being in his second decade racing as a professional.

“I've had race wins and heat wins and battled, but I'd never had the red plate or been in that position. That was all learning for me, it was all new,” said Craig. “I learned a lot this offseason learning that when the track breaks down that I can improve and get better.”

As for Shimoda’s teammate on Monster Energy/Pro Circuit Kawasaki, the guys in green will line up second year pro Seth Hammaker up on the West Coast. Hammaker, who won a race last year in just his third career start, certainly is expected to continue his already rapid growth into 2022 and run up front again.

“Supercross last year went really good,” said Hammaker. “Coming in, this offseason so far has been really good. I'm healthy and ready to go and I just want to be up there and on the podium and fighting for wins.”

Troy Lee Designs/Red Bull/GasGas will send Michael Mosiman to the West this year. Mosiman was desperately close to grabbing his elusive first career victory in 2021, but the failure to do so doesn’t seem to have the 22-year-old phased.

“There's not much I need to do (to win and battle for titles),” said Mosiman. “I've just worked on my mental game, and I think that's the key to unlocking the results that I want on the weekend.”

Mosiman also has a bit of an ace up his sleeve. GasGas has allowed Mosiman, teammate Pierce Brown, and 450SX class teammate Justin Barcia to ride together in a race setting the entire offseason. Mosiman detailed some great stories of close encounters with the usually cagey Barcia, but actually highlighted the value that training in that type of setting provides.

"(Riding with Justin Barcia) has been super fun,” Mosiman explained. “On the track, it's been a really cool dynamic because we all have been riding on the same track every day. The amount of race-craft practice I've gotten this year of being close and in and out is cool.”

He also shared stories of he and Barcia literally putting each other over berms at the test track.

Rockstar Energy Husqvarna will send 2021 High Point National winner Jalek Swoll to the West this year. Swoll, who is entering his third season of supercross, made marked improvement in supercross in 2021. The 21-year-old never finished outside of the top 10 and earned a career best second place at the Arlington 2 Supercross. When questioned on the learning curve, Swoll admitted the first year was a much bigger struggle than he anticipated.

“Supercross is gnarly. You don't find many that adapt to it right away,” said Swoll. “Year one, big learning curve. Year two, I felt a lot better and more comfortable. It's just getting more accustomed to it and more adapted to it.”

Muc-Off/FXR/ClubMX Yamaha’s Garrett Marchbanks enters his second year with the South Carolina-based program. After winning the Daytona Supercross in 2020 with Monster Energy/Pro Circuit Kawasaki, the sky seemed the limit for the Utah native. But a frustrating 2021 left him with just one podium finish. Regardless, Marchbanks also feels like he’s ready to fight for the championship.

“We had a great offseason. Year two with the bike, that helped a lot,” said Marchbanks. “We had probably one of my best off-season's ever. I feel like I can go for the title all year."

Marchbanks also was questioned as to why he was donning a wrap on his wrist, to which Marchbanks explained, “I just came up short on a jump on Monday and just sprained it a little bit but it's feeling way better now. All good.”

Heading into his second year of professional supercross, but his first with BarX/Ecstar/Chaparral Suzuki, is Carson Mumford. The former Honda amateur prodigy admitted that 2021 supercross was a year he’d like to forget, but that the move out of the Honda family to Suzuki now was much needed.

“I think I needed that big change of scenery and needed a lot of growing up on my own. I'm looking forward to a fresh start,” Mumford explained. “This year is kind of like my first year, I didn't get to race that much last year, so treating that like a wash."

In a somewhat surprising move, SmarTop/BullFrog Spas/Honda moved veteran Vince Friese back into the 250SX class for 2022. Friese, who has been a 450SX main event staple for years, explained that the decision to drop back down to the 250SX class was 100 percent team owner Mike Genova’s call.

“It was a team thing (to race 250s),” said Friese. “Mike Genova was looking for more of a show and maybe got tired of me finishing 10th on the 450s so he wanted me to drop down and race these kids.”

And lastly, veteran Chris Blose was in attendance as he revs up for his final year of supercross with the AJE Motorsports/Motul GasGas program. The now 35-year-old Blose announced to the media that 2022 would definitely be his last year racing full-time in professional motocross and supercross.

“I think a lot of people didn't know if I was going to return ever, especially after that Atlanta crash, it was pretty bad,” said Blose. “I've been racing supercross since 2006 and it's been a long time and it's taken a toll. I'm really looking forward to my last year.”

So, there you have it, the 250SX West riders are now known and ready to go for Saturday night. Many riders believe 2022 could be their year, but only one rider will end it on top.  To hear from the entire group involved with the press conference, see the video below.