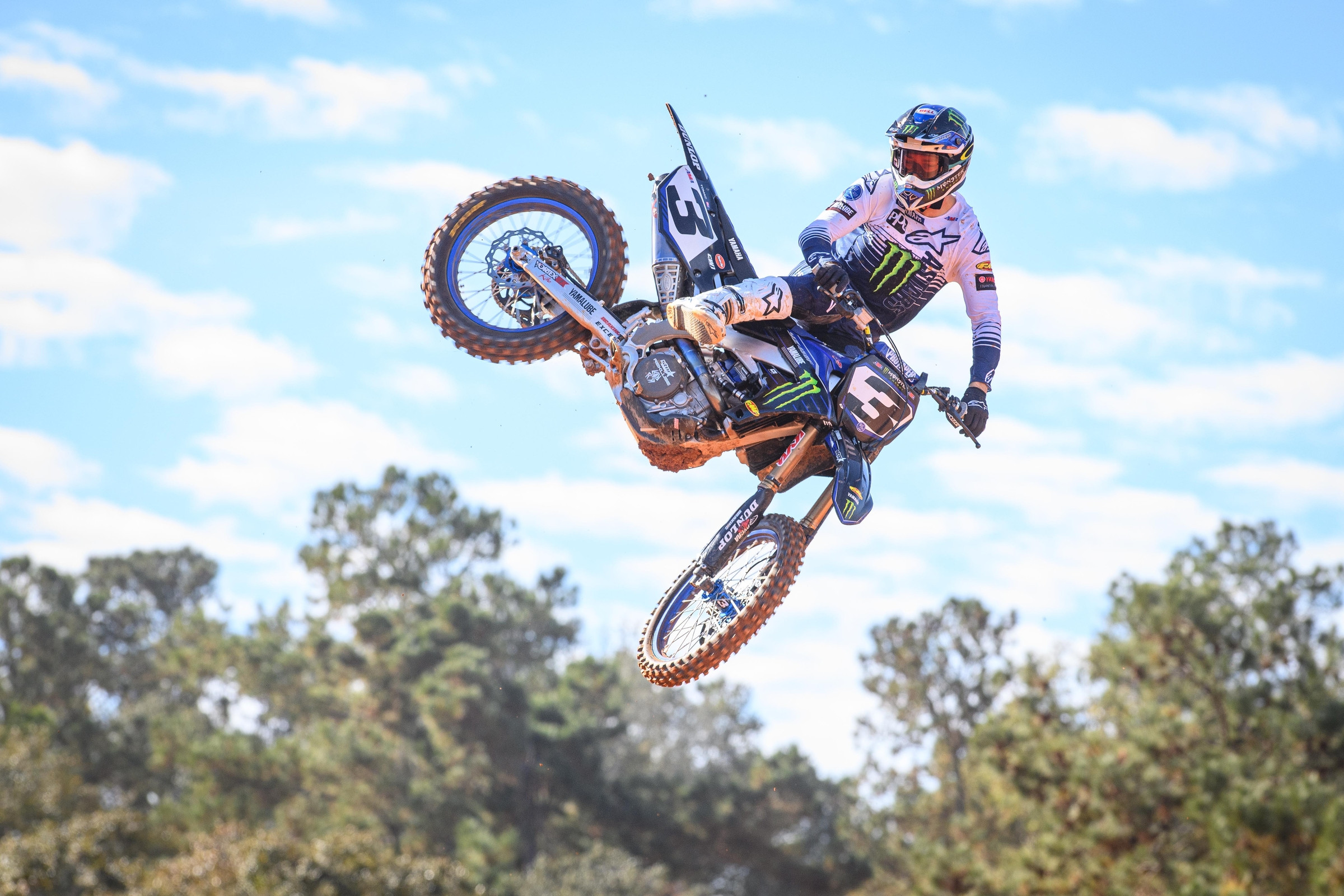 The annual preseason press conference kicked off last night with the 450SX class contingent in full force. Among the discussions, Cooper Webb, Eli Tomac, and Justin Barcia each talked about dealing with many different things this off-season. Webb has an all-new 2022 KTM 450 SX-F Factory Edition, Eli Tomac has made the switch to Monster Energy/Star Yamaha Racing, and Justin Barcia has been training exclusively in California with Wil Hahn and his 250SX class teammates Michael Mosiman and Pierce Brown. All three riders won races in 2021, so what impact will these changes have for them in 2022? Each rider discussed their situation with the media via Zoom.

Cooper, big off-season. Lots of changes. New motorcycle, new training. Just kind of a whole new format for you. What’s been the biggest change for you as far as the move? How has it been over the last couple months? What’s the biggest thing you’ve noticed that feels different than years past?
Cooper Webb: I think the biggest thing is the motorcycle. Obviously, our motorcycle is brand-new. It’s been a great bike to learn and ride and test. It’s been the biggest thing. Obviously, the program is a lot different, quite different from what I’ve done in the last three years. Overall, the vibe has been good. New teammate with AP, and then having Marv back on board. It’s been fun this off-season so far. I’d say the biggest thing is the bike. Feeling good. We’ll see where it all leads up here this Saturday. Overall, it’s been a great off-season. Really looking forward to getting things going.

There’s a new bike. There’s obviously challenges figuring things out, especially in the early going. How has the motorcycle been for you? Do you feel like this has been closer to a perfect match as far man and machine? Do you feel more comfortable on it initially and now going into the first round?
I do. I feel a lot better on it this year. Like I said, it’s all brand-new. Everything from last year’s bike we couldn’t use, so it’s definitely a challenge and definitely a little overwhelming at first, but we really did well this year with getting settings out. The team worked really hard. I can’t complain. I haven’t touched a clicker since, I think, early November. I’m excited. It just seems to fit me. It lets me ride it the way I want to ride it a bit more. Can’t complain about anything so far, so I’m stoked on it.

It looks like you are at your peak performance for the 2022 season. Can you talk a little bit about how it feels to ride with the likes of Eli Tomac and Ken Roczen and to share the racetrack with those equally talented riders?
It’s awesome. Like I said, I feel like I’m in a good position. I just turned 26 and physically I’m in a really good spot and experience in racing and all that stuff. It’s a good place to be. Definitely exciting and cool to race those guys. There’s 15 other guys out there that are top level athletes as well. It has been cool, especially these last few years. I read a stat the other day that we were 84 percent of the last three years’ winners and stuff. Definitely us three have seemed to be the top three in the last few years, but there’s always guys coming in and there’s always plenty of guys that can go in. So, you can’t ever underestimate anybody in our 450 class. It’s just getting gnarlier and gnarlier and gnarlier. The bikes evolve, teams evolve. Everyone is on winning equipment now and doing the same programs and doing everything at the top level. It’s definitely a cool place to be in. When you win or you do well, you’re at the top of the sport, no doubt. I think we’re racing the best in the world, and I’m excited to be able to do it for another year.

Eli, you actually switched teams, spent some time in Florida working with a new group of people. What has been the biggest thing that’s stood out for you as far as the difference in your pre-season prep?
Eli Tomac: It’s everything. It’s a change of scenery, change of the color of my front fender, everything, motorcycle, just point of view on riding. We’ve been everywhere. We’ve been in Florida. Initially started in Colorado. Now we’re in California. Been bouncing around. It’s been really fun. I’ve been riding with a group of guys most of that time. So, it’s just been a nice change. Before I think I may have isolated myself a little bit too much, or maybe because I’m doing something different now it feels better. It’s just refreshing that way. It’s good. Our focus was getting this thing dialed in and then come in healthy. We’ve done all those things. Like I say every year, just looking forward to it.

You had some time out in California, but is Florida brand-new? Have you spent any time in Florida in the past years, or is this the first time doing some preseason prep in Florida?
It’s new. It’s just like getting on more tracks I felt like was important. Getting on different surfaces, more tracks, different designs, different feel. Star Racing has moved their whole base there, so that’s where we did a lot of testing and some good riding. So, that was new for us.

Riding different tracks, does that mean also riding with the other riders on the team? You’ve obviously got a pretty capable teammate there with Dylan Ferrandis. Have you been riding with him? Is that a little different also than maybe the way you’ve done it in the past?
Yeah. It’s just different. I’ve always been with two guys on the track, and we’ve had six to eight guys on the track. That’s what’s different. We’ve all ridden together. There are kind of two groups at the Farm at RC’s when we’re down there, but for the most part we’re all on the track at the same time. So, that’s new.

Jeremy McGrath is the winningest rider in history at the opening round. He has won five of them. He did three straight. You’ve now won three straight. If you win on Saturday, you would break his record for the most consecutive opening round wins in supercross history. I would have to imagine the focus is on the championship, but with a record like that sitting there, is it tempting to go out and get that thing and try to take a record away from Jeremy McGrath?
Justin Barcia: I’d love to take it from Jeremy McGrath. That would make me feel really good. Obviously, like you said, that’s not the main focus, but I want to win races so why not go win the first race? Sounds good.

Off-season for you, just coming in. Same team, same bike, not a lot of changes. We just heard from the former champs. They all had huge changes. You, not much at all, just the addition of Wil Hahn to the program. Is that relieving a little bit to come into the season where there hasn’t been much change and you can just build off of what you did a year ago?
Yeah, absolutely awesome. It feels great to be on the team. They’ve been doing an awesome job. Got a new mechanic. Got a new crew chief. Everything is going really good. Wil has done a phenomenal job. This year was the first year I really trained with two guys, Michael [Mosiman] and Pierce [Brown]. That’s been really cool. Brought some good memories back from my early 250 days. Those two are really keeping me on my feet because they’re really fast. They both are really good at certain things. So, it’s been a super enjoyable off-season. I’ve had a lot of fun. That’s the kind of the word. It’s been fun, fun, fun, fun, fun. Our team is fun. I’m just going to try to keep that rolling, have a good time, and see what the season brings. It’s definitely been enjoyable.

What has changed in your program that you think will help you improve? Where are you at this year? Did anything change or are you sticking with the same program for ’22?
I don’t feel like a lot has changed but I do feel like riding with Michael and Pierce has been huge for me. It has kept the pressure on all season. I’ve been battling. I don't know if they’ll say it, but I feel like they’ve taught me things and I’ve taught them things. So, that’s been super fun. Having Wil has been really cool. He’s a fun guy to be around. We were teammates back in the day, so we go way back. We’ve always been great friends and we always got along well. So, to have him doing the training program and stuff is really cool, because he has ideas. I’ve trained with a lot of different people. I’ve trained myself. We have collabbed on that. So, there’s definitely a few things different, but all in all, it’s been really fun. Just comfortable with the team. I’m super stoked to be with them. I renewed my contract, so that’s awesome. Just looking forward to racing and going out there and doing the best I can do. Usually when I do my best, I’m having a lot of fun and going for it. A lot of good things going on. Nothing too crazy different, but that’s a good thing, in my opinion.