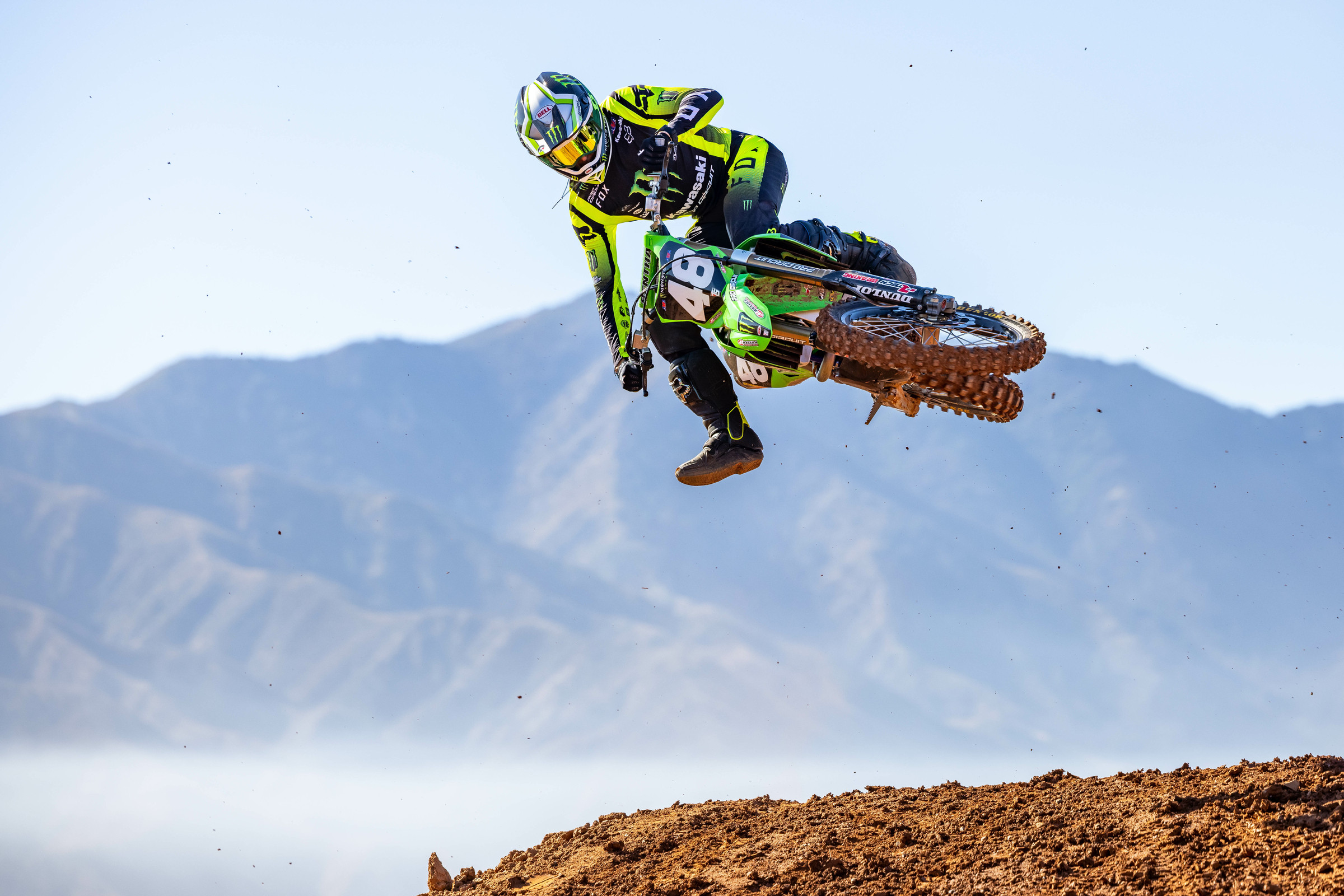 One Cameron McAdoo out of Sioux City, Iowa, has been a man on the move. Hammering out testing and technique laps as part of the Monster Energy/Pro Circuit Kawasaki racing team in preparation for the rapidly approaching 2022 Monster Energy AMA Supercross Championship, the 24-year-old also managed to find time to get engaged this September when he proposed to Maddie Salute, who just so happens to be a member of the three-part harmony country recording act Temecula Road. “I feel like I blacked out,” Salute told People magazine of her engagement to McAdoo. “I can’t even remember what he said.” Added McAdoo of the question he popped, “I don’t even really remember what I said! It was just the basic, ‘Will you marry me?’” And so that was Cameron McAdoo’s big news from the off-season. And while it is fantastic news from the soon-to-be-married couple, it’s not supercross news and that’s where we now step in.

A fighting third overall in the 2021 250SX West Region Championship, and a series in which he claimed his very first professional AMA victory (Daytona) as well as an additional five podium finishes, McAdoo’s ’21 season came to a grinding halt on Saturday, May 29 when he suffered a crash in moto two of the Fox Raceway 1 National and wound up with a torn ACL and a tibia fracture. His season immediately halted, McAdoo went to the hospital, got operated on, and the moment he left the place, started thinking about all things 2022 supercross and motocross. On New Year’s Eve and with a little bit of free time on his hands, Cameron McAdoo talked about just where he’ll be at come the New Year.

Racer X: Cameron, where are you at and what are you up to this New Year’s Eve?
Cameron McAdoo: I’m in California right now. I’ve been doing a lot of off the bike stuff, actually, in the last week or so because of all the rain what-not. Yeah, I’m just getting ready. It’s all coming quick.

I’m fully aware that we all ask you guys the same question every December, but I’m going to go ahead and ask it again right now: do you know which 250SX region you will compete in come 2022?
Uhm, it’s looking more like East, but we don’t really know for sure. Not sure yet. I was a little bit behind with my knee injury from last year, but I’m feeling pretty good now. I had a small crash last week and that set me back a little bit, so that is kind of why probably why I think I’ll end up being on the East.

Going back to the opening outdoor race of the season at Fox Raceway in Southern California last May where you were injured in the second moto, you just straight-up haven’t raced in quite a while now, huh?
Yeah, yeah, at the first round of outdoors I did my ACL and some other stuff in my knee, so that was pretty unfortunate. But like you said, it’s been a long time since I’ve had a gate drop.

Hey, I was not aware of this, but you’re engaged, aren’t you? I did some research before I got a hold of you and a link from People.com appeared and proclaimed, Temecula Road’s Maddie Salute is Engaged to Pro Motocross racer Cameron McAdoo: “When You Know, You Know.” That’s really cool!
Yeah, we got engaged the week before the last national this year. So yeah, we are super-excited about it and we’re going to get married the September of 2022, so exciting times for both of us, for sure.

How did you guys meet one another?
Yeah, Maddie is actually really close friends with Paige Craig, Christian Craig’s wife, and we met through them. I was pretty close with them when I rode for Honda and I’ve stayed friends with those guys, so we met through mutual friends and she’s a country music singer, so she’s pretty busy as well. Yeah, so that’s kind of where it all started off.

A country recording artist and a professional supercross racer. A 2022 power couple for certain, eh?
Yeah, we both have our own gigs and we’re both pretty passionate about what we do, so it’s exciting to kind of push each other and have something to be proud of each other for.

So, I’m going to go ahead and assume that Maddie is a supercross fan.
Yeah, yeah, she does like it. She enjoys it. She’s a pretty calming spirit, so it is good for me to have that around. There’s not a lot of nonsense, so that’s nice. We’re stoked on it.

Okay, when you take a look back on the 2021 season, what do you think? A bit of the best of times and the worst of times?
Yes, I mean 2021 was a huge year for me and for my career. Through the year I was able to kind of put on a stamp that I can be one of those top guys. I always thought I knew that I was one of those guys, but until you start winning races and winning heat races and ending up on the podium consistently and fighting for titles, you’re really not. It was a lot at once. Before the 2021 season, I only had two podium finishes throughout my whole career. In 2021, I was able to be on the podium almost every weekend and I was fighting for the red plate, and I actually won a race. It was a lot to bring in and I learned a lot. I had a couple of bad races that kind of kept me from the main goal. That stuff was what I learned the most from. All of that taught me the most and what it taught me was that you really do win or lose championships on your bad nights. It was all a big confidence booster. Obviously, what happened to me in the outdoors was super-unfortunate because it is pretty important, especially as a Lites rider, to back up what you can do in supercross on outdoors, you know? You need to show what your potential is in both forms of racing. Luckily, I’ve got another year, or another year or two of the Lites class to show what I can do.

And the wicked crash you experienced at the Atlanta 2 Supercross certainly put your name in all sorts of light, didn’t it?
Yep. Totally. Especially with social media these days and the way everything is, the fans have so much access to us. It’s cool in a lot of ways, they get a lot of close insight on what us athletes are going through. Sometimes I think the fans struggle to understand what we do and deal with, but it’s all part of it. That’s part of being on a platform and being one of the best supercross racers in the world. For sure there is a lot nowadays with media and all the other communication things, but I think it is all good.

Very good point. Being a professional supercross racer is not the easiest way in the world to make a living. Whether we all admit it to one another or not, as far as being a rider and a racer, often times you’re only as good as the last thing you do.
Yeah, it is. Especially as a young racer, I was always struggled to understand that. It truly is correct. You’re only as good as the last thing you did in your last race. However, if you don’t live through it, you won’t make it. That was another thing I started to learn while growing up. My racing isn’t who I am. It’s what I do. I’m very passionate about what I do, and it means the absolute world to me, but I’ve lived the highs and the lows and if you get a fifth or a sixth on a Saturday night, that’s a tough way to live. I’ve learned a lot and I still have a lot to learn, for sure.

The Monster Energy/Pro Circuit Kawasaki team has been very good for both you and your racing. How has it been being a member of the team?
I mean I love the team. I love where I’m at. Mitch [Payton] and I get along extremely well. He has a lot of knowledge and has a lot of experience with winning races and helping guys reach their potential and be their best and it’s obviously an honor to work with him and the rest of the team. My mechanic Kyle Defoe is awesome, and the list goes on with all of the people that make it all work. I really do enjoy working with those guys and we all have the same common goal and that’s to be the very best we can be when it comes to race time. We all love to win.

And there is going to be a lot of competition out there in 2022, isn’t there?
Yeah, there really is. And now there are multiple teams with four or five guys on them. It’s so close. Everyone works so hard, and everyone is riding so well. All the guys, whether it is the Yamaha guys or even all the Pro Circuit guys I ride with every day, are extremely good riders and very fast. Honda, Husqvarna, the list goes on. Every factory team has extremely good riders and I think everyone kind of has that same will to win and that’s what makes it all so exciting for the fans on Saturday night. We work hours and hours and live our whole lives every single day throughout the week to go beat other on Saturday night. That’s what makes supercross so exciting. We need to get back to racing. Our sport needs the Anaheim races, and it needs the A1s and the Saturday night weekends at the stadiums for our fans. I think Anaheim is a special place and it’s a really special race for our sport.

We’re all looking forward to January 8, 2022, huh?
Yeah, yeah, it’s a special time of year for us as racers. You know the jitters are starting to come and the holidays are over. It’s been a little bit hard to completely focus on the holidays because it’s the time of year where it’s time to go. Everyone is getting kind of antsy and it’s exciting times for all of us in the industry.