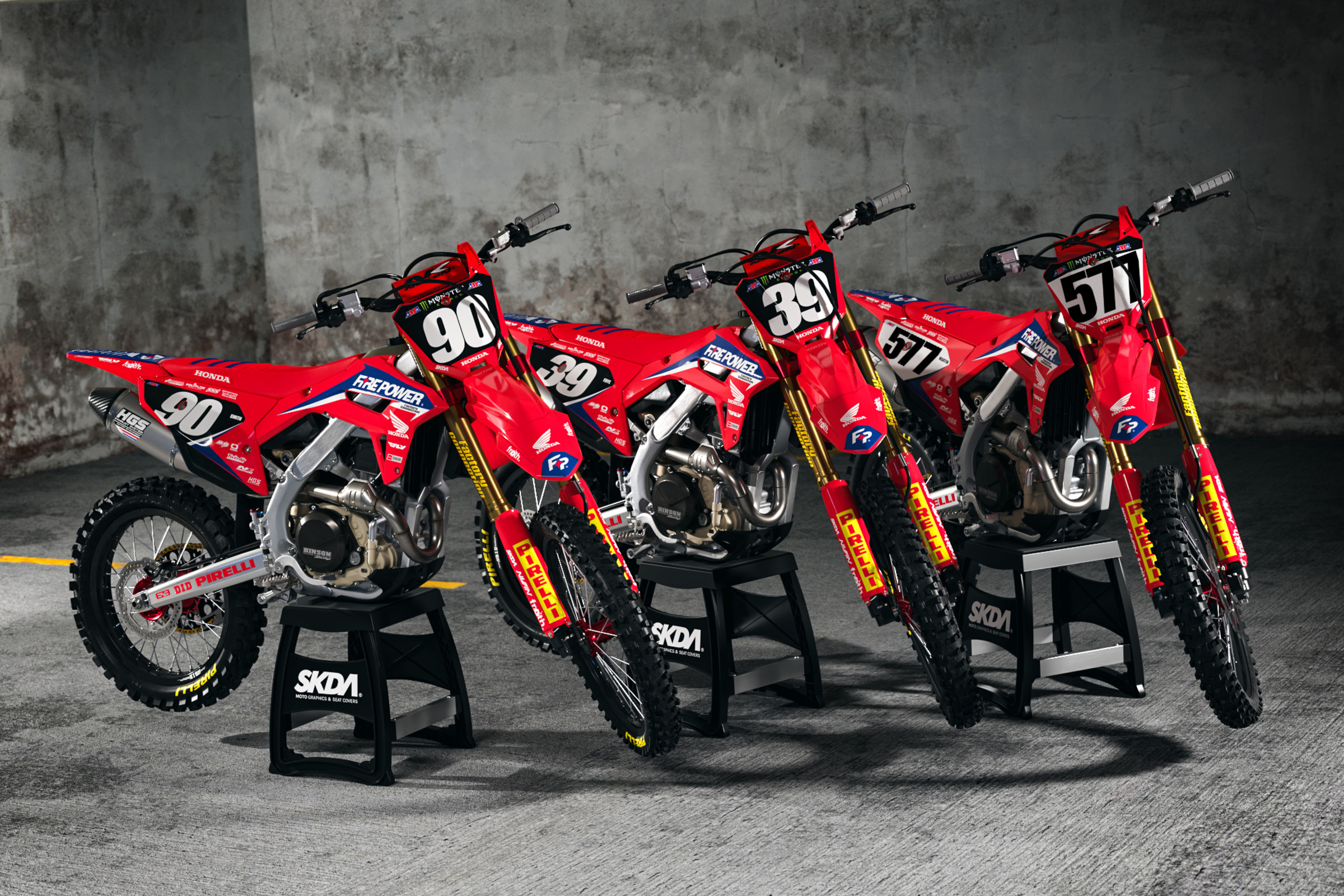 Australian team owner Yarrive Konsky isn’t giving up on his dream of a top-level American racing team, so his squad returns to Monster Energy AMA Supercross for another run in 2022 with a new title sponsor, new riders, and a new team manager. Konsky ran the team with Penrite and Muc-Off sponsorship the last two seasons, which included a 450SX podium from Justin Brayton last season. The team also continues to race with great success in Australia. The U.S. team for 2022 includes new title sponsor Fire Power, continued support from Honda, and a focus on the 250 class with riders Jordon Smith and Jarrett Frye. The team will now be based at the Millsaps Training Facility in Cairo, Georgia, and recently-retired Martin Davalos has been named Team Manager. Both riders will race in the 250SX East Region.

It certainly couldn’t have been easy running the team during COVID-19 times, but Konsky is one of the most passionate characters in the sport. He lives and breathes for racing, and bolstering the structure with Davalos and MTF should only help grow the program.

Jordon Smith has long been considered one of the most talented riders in the game, and he has won races and battled for titles before in 250 supercross. Injuries have ruined most of his recent seasons, including the last two with Monster Energy/Pro Circuit Kawasaki. Smith has also been based at MTF for a long time, so this connection with this team makes sense.

Frye struggled through his first full professional season in 2021 with Monster Energy/Star YamahaRacing. Failing to win on a Star bike is not a good sign in this day and age, but the Maryland native is looking to rebuild himself heading into his second supercross season.

You probably know all about Davalos. The veteran has won plenty of 250SX races and battled for titles, then spent the last two seasons in the 450SX class with Team Tedder/Monster Energy/Lucas Oil/KTM Racing. Davalos grew up riding at MTF and still lives in the area. We can imagine Davalos still hauls on a bike so he can add to the testing process, and the team even hinted at Marty doing some races in Australian supercross down the road. The Marty party might not be over just yet.

Below the team’s press release on the 2022 effort.

Fire Power Honda Racing will shake things up for 2022, with a two-rider effort in the 250 East Coast Region of the 2022 Monster Energy Supercross Championship and Martin Davalos has signed on as Team Manager. A part of the American series since 2020, the team has achieved modest success at the highest levels and aims to improve its results in the season ahead.

Davalos is no stranger to the demands of the AMA. The Ecuadorian competed in America for 15 years with a can-do attitude that netted him five wins, 24 podiums, and 46 top-five finishes from 101 starts in the 250 Class. The determined racer stepped up to the 450 Class in 2021, and his one top-five finish and seven top-10 results earned him the Rookie of the Year award.

Davalos announced his retirement from full-time competition in America in 2021 and will now turn his attention to managing the Fire Power Parts Honda Racing Team from its new base of operations at the Millsaps Training Facility in Georgia.

"I am pumped for this new chapter with Fire Power Honda Racing. I was hoping an opportunity like this would come my way, as I know I have a lot to offer the team," said Davalos. "I'm looking forward to managing the program from MTF in Georgia and to being involved in testing and development as well. The team has a championship-winning program in Australia, and I believe in its direction in America for next year. Relocating the team to MTF will be a huge advantage, as it will help get the most out of a program that wants to contend for championships. We have signed two riders and have a lot in place already."

"After travel restrictions made it difficult for me these past two seasons, I needed someone to help manage the program in America, so I am really happy Martin is on board," shared Konsky. "I believe he will have a big impact on the crew and the riders. He has certainly earned the respect of his peers for a reason."

After experiencing the no-nonsense approach MTF has towards training and professionalism first-hand, Konsky believes moving from California to Georgia was a necessity.

"I've trained at MTF, and the professionalism and dedication they have for their athletes is what I wanted the team to experience. They support their athletes in all areas of racing, and their commitment is unwavering. We are fortunate they welcomed our program," Konsky continued. "The connection between MTF and Fire Power Honda Racing goes back years and has been an element in the team's past success. I first met Gavin Faith at MTF, brought him to Australia, and we won championships together, so it's fitting that our groups will work together in 2022."

The team has signed riders Jordon Smith and Jarrett Frye to race the all-new 2022 Honda CRF250R during the nine-round 250 East Coast Region of Supercross.

Jordon Smith enters the seventh year of his career with an already-impressive resume. The 25-year-old from North Carolina turned pro in 2015 and has claimed three Main Event wins and 13 podiums in the 250 Class. A long-time resident of MTF, Smith will seamlessly transition to the team. "I am excited to join Fire Power Parts Honda Racing next year! The team has shown promise the past two seasons, and the changes they are making for next year will help us all," said Smith. "Being in Georgia and at MTF will give us an ability to be better prepared, and I believe that will make a massive difference to our results. Martin is very meticulous and focused, and that will make us all accountable. I can see why he was so successful as a racer, and it's already translating into our preparation for next year."

Jarrett Frye has shown plenty of potential over the past year and a half, and with three top-15 finishes to his credit, the 20-year-old from Maryland is ready to step up in 2022. "This past year proved challenging, and riding with injuries while feeling the pressure to race was hard. But, because I knew I didn't have a deal for 2022, I persevered and did my best," said Frye. "Being at MTF has been great and getting to work with Martin is unbelievable. There aren't many team managers in the pits who have his achievements. He knows what it takes and is working hard to build a solid program."

Jarrett and Jordon have been testing with the team for the past six weeks, and Konsky is proud of the group for believing that the program will help them race at their potential. "We all know injuries hinder a riders' full potential," stated Konsky. "I have spoken to Jordon over the years and have always wanted to work with him. I believe in him because he applies the skills, desire, and commitment to racing. Jarrett was also at the top of our list. I studied his amateur career, pro results, and technique, and if he wants it bad enough, he is more than good enough. Finally, Martin's experience and outlook are what we needed to give us the strength to be a winning program."

"Our focus is the East Coast Supercross region, but we haven't ruled out racing two or three rounds of Pro Motocross and bringing the riders, including Davalos, to race in the Australian Supercross championship," stated Konsky.

Fire Power Parts has increased their support for 2022 and will take on title sponsorship rights. "Fire Power Parts were partners for this season, and we're excited that they have stepped their support up for 2022. In addition, the team will announce several new sponsorships for next year in the coming weeks," concluded Konsky. "I want to thank Muc-Off for their support this season, and though we have agreed to go in different directions for 2022, both of our groups are better for the time spent together."