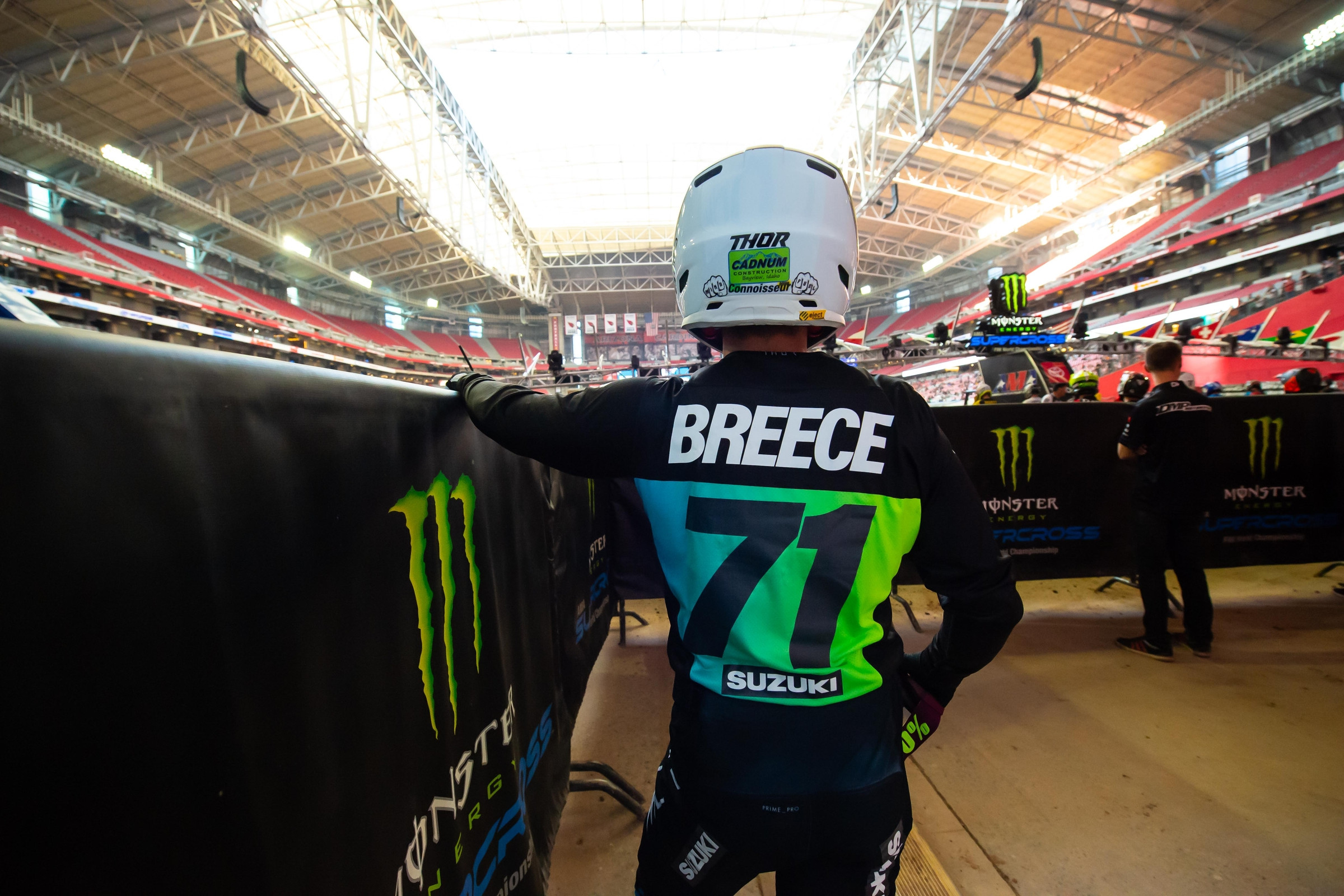 The 2022 Monster Energy AMA Supercross Championship is just over a month away. Silly season has come and gone, riders have signed their contracts and gotten their new bikes. All the factory riders have to focus on now is riding and training, a routine they are used to. That's not exactly the case for every rider though. Some are still trying to put a program together—finding sponsors, booking travel, ordering parts, and sorting out so many other pieces of the puzzle that teams handle for their riders. This is the case for privateer Ryan Breece. He, once again, is starting over.

Breece, who grew up in Coeur D'Alene, Idaho, turned pro in 2015. Growing up in the Northwest, you could only ride about five months out of the year. There was a healthy arenacross scene that he cut his teeth in, but if you wanted to step up to the next level you had to travel south during the winters. At 14 years old, Breece would travel to his grandpa's place in California to train. In his youth he was also a talented athlete in more traditional sports. Breece was recruited to play college football until he tore his meniscus. He traveled to Montana Western to do a meet and greet with the coaches and see the facilities, but realized it wasn't for him. He decided to focus on racing in order to fill his desire for competition.

Breece has had some impressive accomplishments in his career. He won the Amsoil AX Lites Championship in 2017 and 2018 and he won the ADAC German Supercross Championship in 2020. Unfortunately, those accomplishments do not guarantee a long-term contract with a factory team. When not racing AX in 2017 and 2018, he raced some supercross rounds with Rockwell Racing. In 2019, Cycle Trader/Rock River Yamaha brought him onto the team midseason. In 2020, he rode for Twisted Tea/HEP Motorsports Suzuki as a fill-in for Max Anstie during supercross. In 2021, he did not race a single round of supercross or the Lucas Oil AMA Pro Motocross Championship due to a knee injury. “It seems like I'm always starting over,” he said.

When asked how difficult it is to get prepared when you are going from team to team, from one bike brand to another, and never really knowing what's next he responded, “I don't know if you do get prepared for not knowing. When you land on a team you have to get with their program and get on everyone's side. Make sure your suspension guy has your suspension ready. You have to get your laps in. I've kind of become immune to jumping on a bike and knowing I have to go perform. It's second nature to me to figure it out. I go off the stock bases. I won the German SX Championship on a Yamaha after five days to prepare coming off a Suzuki.”

When asked what his plans are for 2022, Breece said with a laugh, “I guess I got lost in the mail over the year I've been hurt.” He hinted there may have been some interest from a team, but things changed recently. That leaves him scrambling to do his own deal. He said he had his girlfriend, Makenna, put together a resume and, “We went door knocking. We're still searching. It's a hunt. We haven't come up with the whole $75,000, but we're on a mission.” A local dealership, Westside Motorsports, is helping him with bikes, but there's still a lot to do before Anaheim 1.

Privateer life is never easy. These guys love racing and chasing the dream. When asked what things would help a guy like himself, other than a bottomless bank account, he mentioned having the chance to ride press day. This is a common request from privateers. Supercross Public Relations Manager Sean Brennen is flooded with requests every week and does a great job of scheduling early morning riding for local press, as well as national press on Friday afternoons. But there are more riders than open spots for press. Breece expressed, “The guys who rode press have an advantage on race day. The first practice they are hitting the triple while we're rolling the track. In two laps they already have a sprint lap down. And we don't even know the jumps yet.”

Despite any struggles, Breece is a guy who almost always has a smile on his face. He's been spending time with his business, Ryan Breece Clinic, teaching local riders technique and skills. This helps him keep up to date with his skill and technique training while hurt, and is also a way to make some income while giving back—while sidelined himself.

As far as his career as a whole, and his future, he said, “I'm overwhelmed with how it's gone by doing it on my own. I never would have imagined I'd go overseas to race dirt bikes and grab a championship over there.” Breece isn't too worried about life after racing. He enjoys doing other things like surfing, house hunting, and investing in property. He also plans to go work at his dad's plumbing business and possibly get his plumbing license.

Although Breece may be starting over again this season, he knows what to expect and his attitude is positive. It's guys like him who are the backbone of our sport. Expect to see him making mains and enjoying the competition in 2022. And if you’re at a race, go out to privateer island and let him know you appreciate him being there.