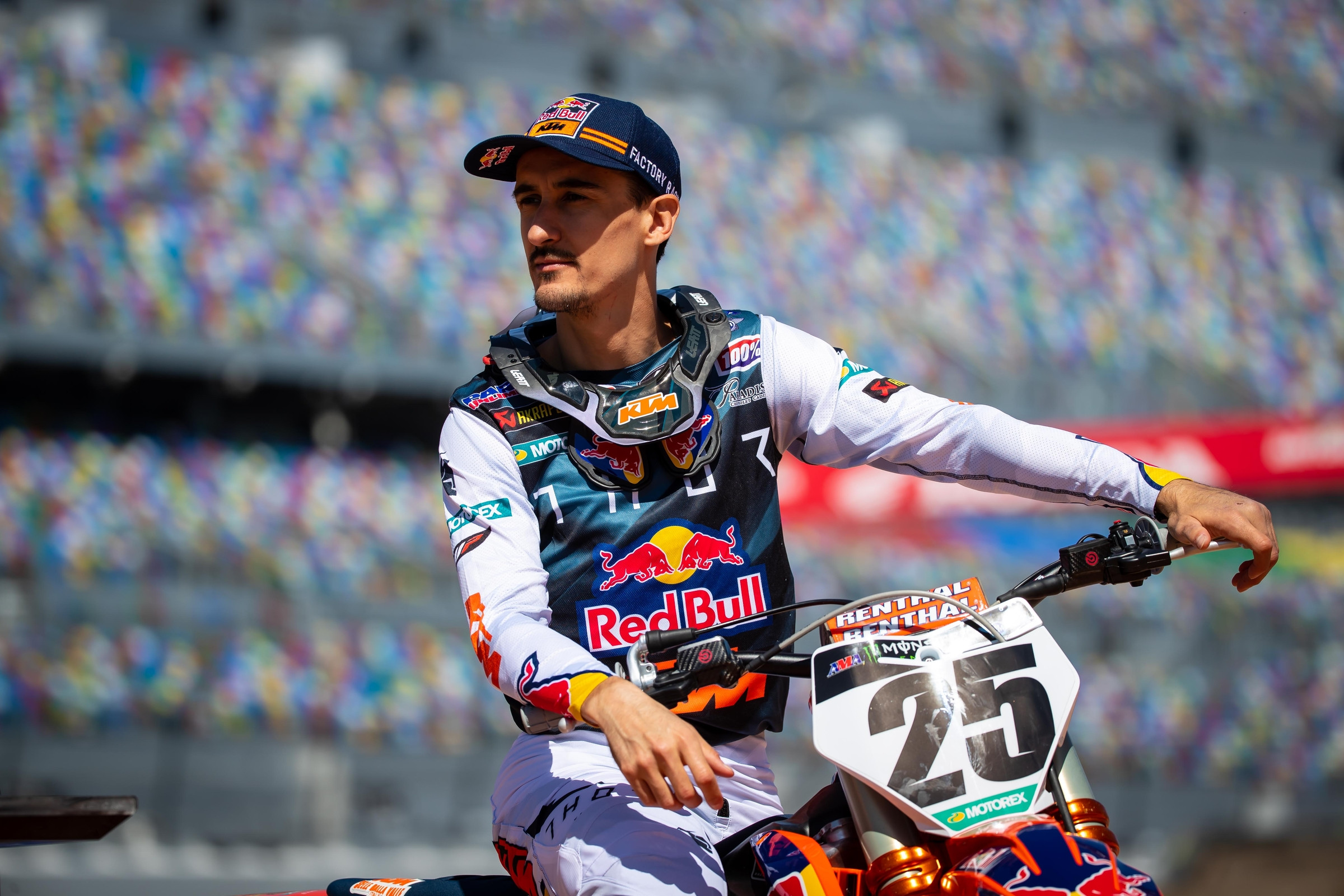 Don’t forget about Marvin Musquin. Each season of Monster Energy AMA Supercross brings shiny new toys in terms of new talent into the class and big names switching teams, while Marvin is now a veteran part of the scene, and part of the same Red Bull KTM he has ridden for ever since moving to the U.S. a decade ago. After missing the 2020 supercross campaign completely with a knee injury, he returned to the stadiums in 2021. His season was good an even included a race win and some podiums, but it was not the same title-contending level we had seen from Marvin previously. Then the Lucas Oil AMA Pro Motocross Championship was even further off of his usual pace.

During this off-season, Red Bull KTM and Musquin announced a new contract, but it would extend only through this supercross season. The shiny new toy for KTM is Aaron Plessinger, who is new to the team. There’s also the chance that Tony Cairoli, freshly retired from the MXGP circuit, could make an impact if he wants to race some Pro Motocross rounds in the U.S. All of this news makes it look like Marvin’s chances have been diminished. Then we ran into De Coster at last week’s brick-laying ceremony for the new KTM headquarters in California. He went out of his way to say that Marvin is looking very, very fast in the off-season.

We followed up with Musquin himself and found reason for the optimism. First, he’s another year past major reconstructive knee surgery. Also, KTM is debuting a new-generation bike in 2022, which will be publicly unveiled shortly as a Factory Edition (expect to see it in the first half of December). Musquin can’t speak about the bike yet, but it’s clear he’s excited about it. He’s also made a major change to his program, leaving his long-time home at Aldon Baker’s Baker’s Factory in Florida to work full-time with David Vuillemin in California. Marvin seems very excited about so much change, but he knows as well as anyone that flying at the test track in November doesn’t always equate to race wins come January. So consider this tempered optimism. Still, these remain exciting times for the Frenchman, who will turn 32 just before the season begins.

Here’s what Marvin had to say when we talked to him.

Racer X: So as part of this ceremony with KTM building a new head quarters, they had you and Cooper Webb do burnouts on street bikes. How much do you know about doing a burnout on a street bike?
[Laughs] Yeah, zero! Funny thing is, when they asked me to do a burnout on a street bike, I said “Well it’s a street bike so there is traction control!” That’s the first thing I thought about. And I don’t know how to turn it off! Luckily, they set it up for us and we jumped on it. But we had no practice. Cooper and I just looking at each other like, “I hope this is going to work out!” But it did work out pretty good. If you have images, it probably looked pretty good.

Yeah, it did. So Roger [De Coster] told me you’re flying at the test track. Are you feeling good?
[Pause] Yeah. It’s an exciting year, it’s a new year…I don’t know how much more I can say but… [Note: The Red Bull KTM team is expected to race on an all-new motorcycle, which we be launched as the Factory Edition 450SX-F in December.] Everything has been good. The team, my mechanic Frankie [Latham], and David Vuillemin when he comes to the track with me to work on stuff. Yeah, it’s a new year with new things so I’m excited.

Last year was a comeback year for you in supercross, coming off of a knee injury where you missed all of 2020. You said all the right things about trying to get back to your full potential, and I’m sure you worked hard, but looking back now, are you much better a year later than you were at this time last year? Did an extra year really help?
Yes. After this year I had no injuries and the body feels much better. I’ve been working on some things that are a lot different, so that’s why I say I’m excited to see if it will help or make a difference. So that’s why I’m saying it’s definitely a new year.

That will stay that way for the full season?
That I don’t know yet. For now, yes.

And you’re back with David Vuillemin?
Well I wouldn’t say back, because back in 2018 DV would come to the track and help sometimes, but now he’s taking care of the riding, the training, the physical part. Everything. Last time it was more just coaching with the riding.

You had worked with Aldon Baker for a long time. How did that go when you decided to leave?
I had awesome years working with Aldon. I think it was seven years. I wanted to have something a little bit different, like staying here in California, and have it different. So it is a lot different and I’m looking forward to the new season to see how it works.

That’s the funny thing. You guys never really know. You can feel good in the off-season, you can think you’re doing all the right things, but you just never know until you get to Anaheim.
Exactly. Like every year, everyone is going to work hard, the level of the competition is going to be gnarly, all of the manufacturers are working hard, but I know I’m on the best team, and we have new things coming for next year. So it’s exciting. It always exciting for the new year, but this year I have a lot of different things, so it’s even more so.

Last thing. The team’s press release says you’re racing supercross this year for the team. So is this like, when the checkered flag falls at the final supercross round, Marvin Musquin is retiring? Are you thinking about other stuff or other racing?
[Laughs] Even he himself doesn’t know!

Even Marvin Musquin doesn’t know what’s next for Marvin Musquin!
[Laughs] Yes! But my contract does go until the last supercross.