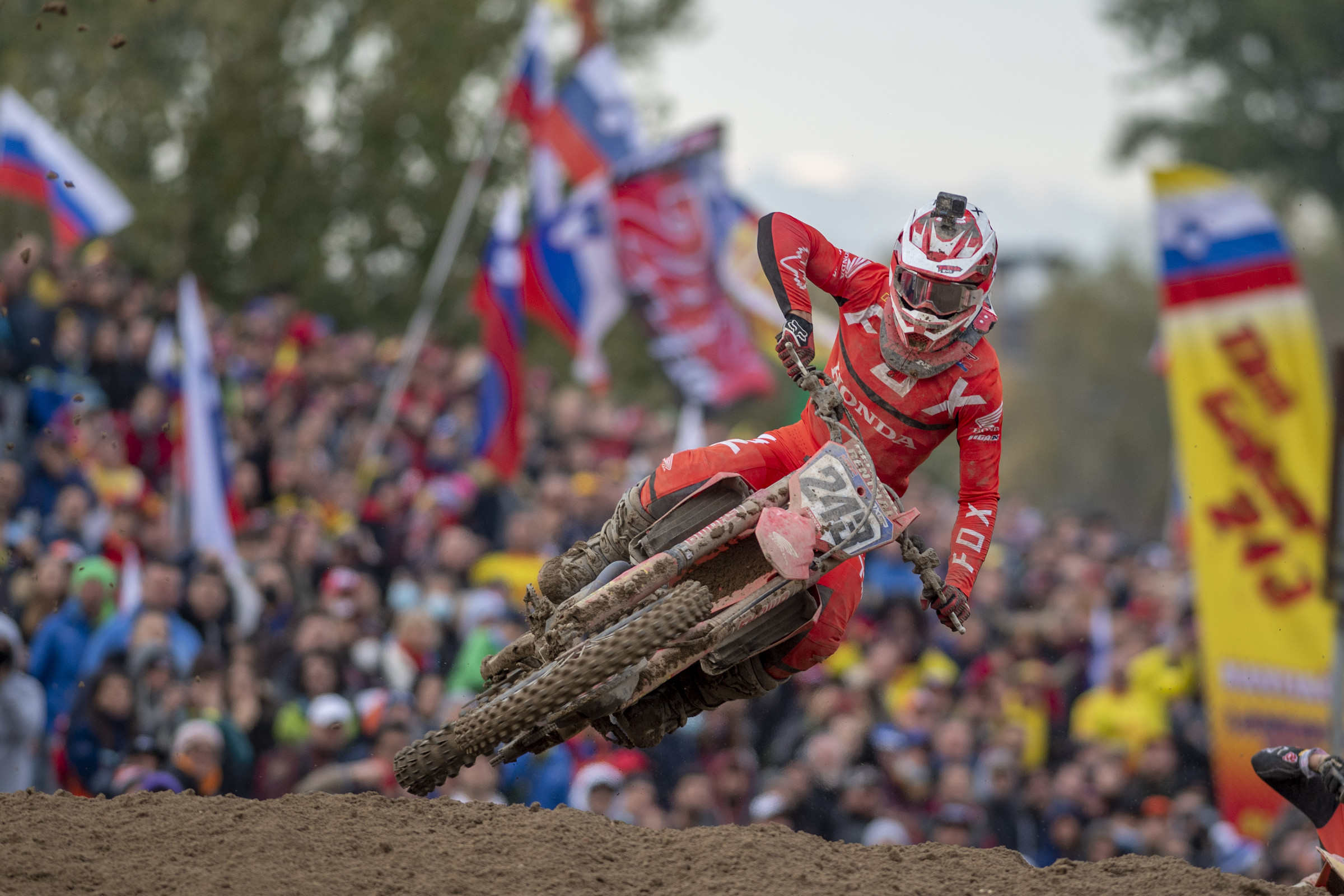 3 on 3 The Final Showdown

It all comes down to Wednesday! With just two motos remaining in the 2021 FIM Motocross World Championship (MXGP), three riders enter Wednesday’s MXGP of Citta di Mantova with a shot at walking away as champion. But this title fight looks a little differently than it was just two days ago when all three riders sat within three points of each other. Following Tim Gajser’s penalty for gaining an advantage off the track in MXGP race one of Sunday’s MXGP of Lombardia, the Slovenian now sits 15 points adrift of championship leader Romain Febvre.

Febvre was able to capture the first moto victory on Sunday and followed it up with a second-place finish in moto two. Yet that still wasn’t enough for Febvre to capture the overall win as Jeffrey Herlings came from 15th to second in the moto one and won the second moto to capture the Grand Prix victory. What the two-moto split left Febvre and Herlings at status quo with still a three-point advantage to Febvre entering the finale tomorrow.

With Febvre and Herlings both eyeing their second MXGP title as Gajser tries to pull his fourth out of a hat, there is a lot of tension and drama to focus on. After racing concluded on Sunday, each rider spoke about their days and how they view the championship picture with two gate drops remaining.

“That was definitely a big win in the first moto. I felt good on the track today though it’s really sketchy in places with the loose surface on a hard base. I took the lead pretty early in the first race, but it was tough at the front to be sure of the best lines. It was a heavy race, and I struggled a little mid-moto but picked it up again at the end for a strong finish. I again got a great start in race two, but I didn’t want to take any risk of a collision to pass Prado and I lost some time to Jeffrey. I made some fast laps to close the gap a little, but he was still three or four seconds clear so at one point I decided to settle for second and take the red plate to the final round. It may sound strange that I still don’t feel any pressure. We have really good starts with our KX450-SR here in the sand so I’m confident for Wednesday. We are really close, and the best man will win. It’s game on!”

“What happened in the first race was so dumb. I put myself in a good position right from the start. I was behind Romain. I did exactly the same crash in the warmup. I just hit my left foot into the side and just got kicked off. I knew I had to work hard. I was almost dead last and worked my way to second. Second race, I had a decent start. I was straight into third and managed to pass Jorge and Romain. Then I was able to make a little gap. Then I was checking where Tony could be. I was actually not trying to run away too far. Then I saw that there was too big of a gap between Romain and Tony. Then I pulled away for the second half of the race. Every point counts right now, so it’s -3. It’s going to be an all-out war on Wednesday. There’s a lot on the line. Different riders, different countries and different manufacturers all going towards the same goal which is the world title. It doesn’t matter who wins it. I think we both deserve it anyway. Even Tim. So, it will be a good one on Wednesday.”

“I am very disappointed with how today turned out. In race one, I got hit by another rider and that caused me to go out of the track and because of the way the track is designed, the safest place to get back on is where I went. I believed I was just outside the top five when I went out, and tried to re-join in the similar position, so as not to gain an advantage, but when I finished the race in third, I was told that I had a five-position penalty. It is not nice to have to try and come back from that when the championship points are so tight, but I tried my best to regroup for race two and in the end, I came through to third again. There is still one round left so I won’t give up, as anything can happen, and I would like to thank all the team and the fans who came to support me this weekend.”