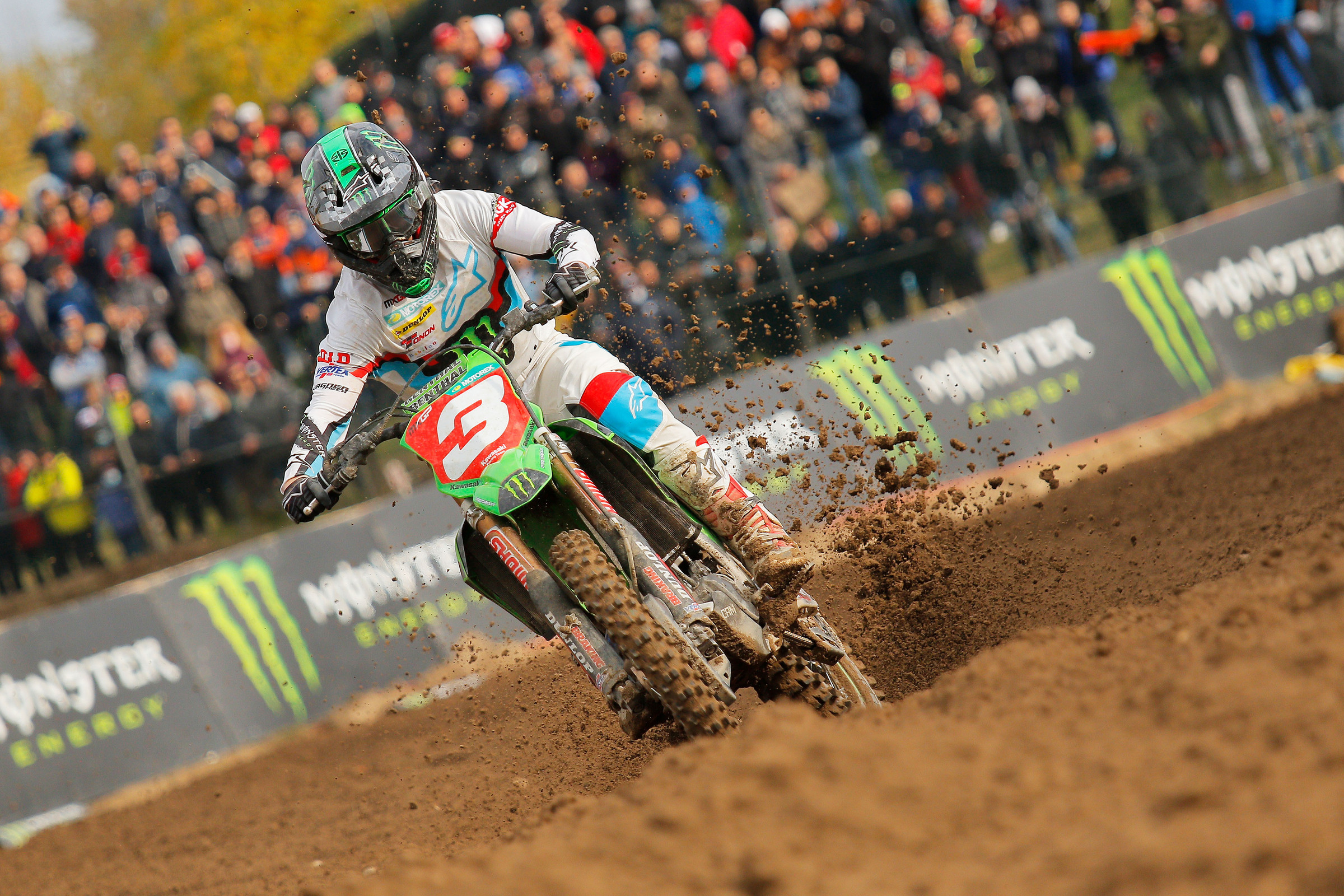 Monster Energy Kawasaki MXGP’s Romain Febvre can see the top of the mountain again. The 2015 MXGP World Champion has battled through a fair share of injuries in the years since his monumental title victory as a rookie on a 450. At the end of 2019, Febvre parted ways with the Factory Yamaha program he took to the top after five seasons win the brand. He moved to Monster Energy Kawasaki where he has really found his footing. A fourth in the World Championship last year was simply a building block for the Frenchman in what has become a true championship caliber season in 2021. Now after a second place overall at the MXGP of Lombardia on Sunday, where he split the moto wins with title rival Jeffrey Herlings, he holds a three-point lead heading into the final race of the season on Wednesday. We caught up with Febvre after Sunday’s race at Mantova.

Racer X: You went 1-2 today and tied Jeffrey [Herlings] on points. I’m sure you’re satisfied with the first moto victory, but you were running Herlings down in the second moto as well. Just sum up your day and how you felt your speed was.
Romain Febvre: Yeah, really happy about my day, first moto especially. I had a good start in the second moto also, but [Jorge] Prado was leading, and Jeffrey passed us in the first few corners and then I was behind Prado, and he tried to block the way, let’s say. But anyway, it’s like this. It’s racing. Maybe I was a little too late to pass Prado to maybe catch Herlings, but it was a little bit like he’d make a gap, and then I’d close that gap a bit. Not that much though, I made maybe two or three good laps. But I think he started to change his lines and the gap stayed the same for a few laps and I ended up settling for second. I knew the points would be the same on the day and yeah, we will see on Wednesday. If I do that on Wednesday, I am happy.

What are the nerves like coming into the final round? You’ve got a three-point lead in the championship, I’m sure there’s a lot of pressure involved.
I feel good. I prefer to be three points in front than three points in back so, I’m good.

In that first moto, you started to get away a bit, but then they reeled you back in. How much of that was race management knowing that you had a gap, and you could kind of let them catch you a little bit to maybe go faster at the end?
Yeah, it was good. I think the first 10 to 15 minutes, I did really good. I passed quickly into the lead and then made a comfortable gap, let’s say between five or six seconds. So, yeah for sure, I could see the guys coming, and starting maybe changing some things on the track, but that was pretty good. Honestly, it’s tough because you have no one in front so you cannot judge if your line is good or not. So, in that way, it was a little bit tough for me to understand where I was losing time or not. But anyway, like I said, it’s always better when I’m leading then being behind, so I was happy with the first race.

I know you came out second today, and you’ve only had the one GP win on the season. Is it a little bit frustrating to not have the GP wins racking up even though you have a lot of moto wins and you’ve been up front all season?
If I get the title Wednesday, no. [Laughs] But yeah, I’m always close! I’m not winning, but I don’t really care about GP wins, it’s always better to have them for sure, but again today, same points. What can I say? It’s still good for the championship, and that’s really the main thing. GP wins, I maybe don’t care so much.

I saw you spending some time with your wife and child [Romain’s daughter Nina was born in January 2021]. When you won the title in 2015, I’m sure you were a lot different of a person, but now you’ve had a child and moved up more in your life. How much more does this season mean to you, and everything you’ve accomplished this year compared to what you did in 2015 now that you’re at this stage in your career?
Yeah, in 2015 I was young. It was six years ago and I young and coming into the class without pressure or anything and it was kind of a learning process. Everything that year was good. Some really good riders were injured also, but anyway, it was something different. This year, after all the years that I was injured, and some years I didn’t have the level also to battle for the win, so to bounce back from that, I feel pretty good. When I came to the team [Monster Energy Kawasaki] two years ago, I knew something good can be done with that bike. I’m proving it now. Last year, I was injured at the beginning, but the middle of the season to the end, I was pretty strong too. This year, it’s a big challenge for us.