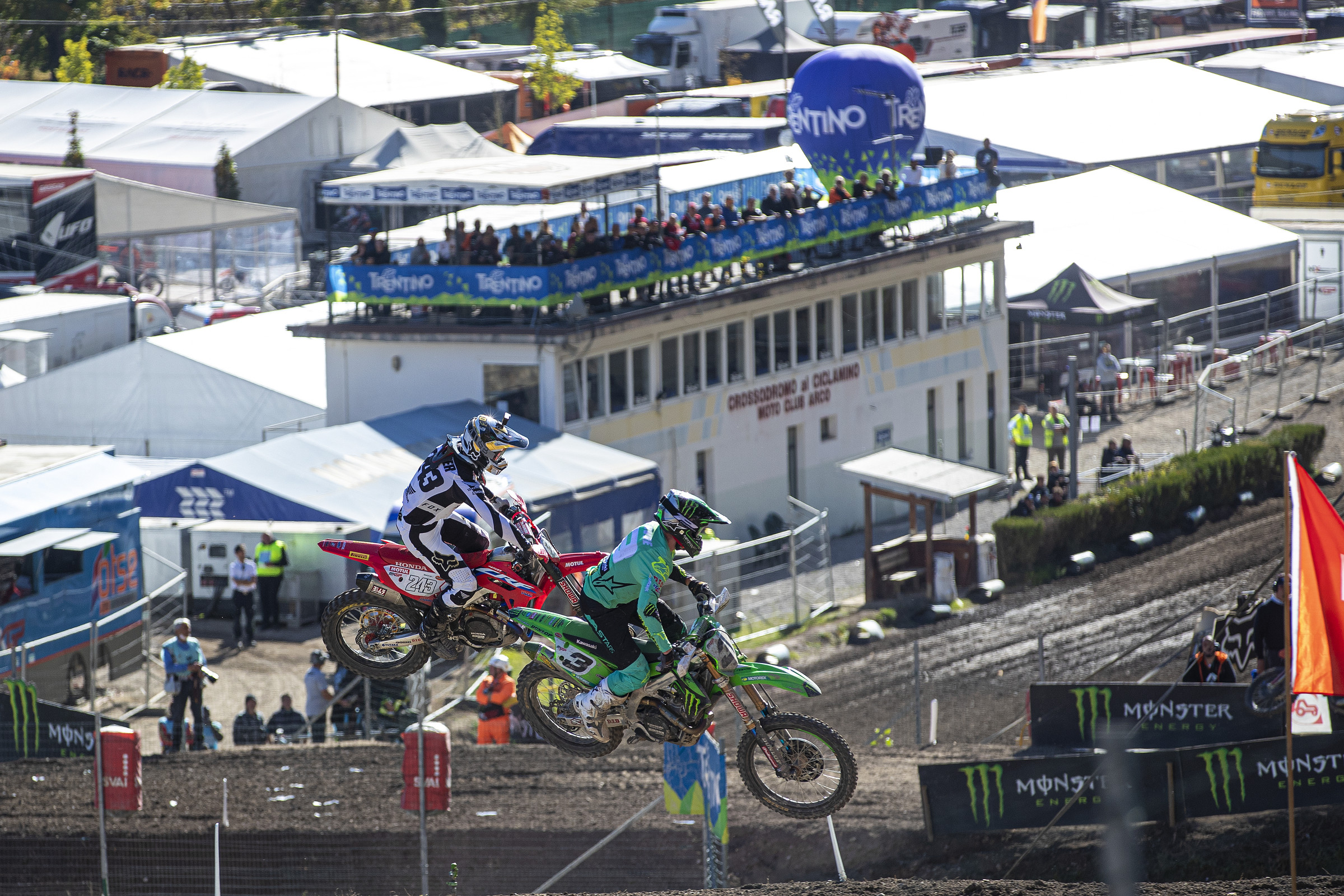 If you have not been following the FIM Motocross World Championship, then you have been missing out. The championship has had some great racing in both classes, similar to the U.S. racing, where several riders are battling for race wins day to day. Now, after a wild 15th round, the MXGP title has tightened up: Jeffrey Herlings’ crash in the first-turn of moto one evaporated his 24-point lead over second-place Romain Febvre, who won the moto and also claimed the points lead by a single point! Herlings came back out and finished fourth the second moto (ahead of fifth-place Febvre), which then reclaimed the championship lead for the KTM rider. But the #84 only has a one-point lead over Febvre and a three-point lead over Honda HRC’s Tim Gajser. With three rounds (and 150 total points) remaining, the title can go to any of the three. Because of the tight racing and points battle, we grabbed some thoughts from our guys Jason Thomas, Jason Weigandt, and Kellen Brauer, who weigh in on the crazy three-rider battle for the title.

Are you in shock how this MXGP Championship is turning out?

Jason Thomas: It feels scripted! We have had crashes, injuries, mechanical failures, and incredibly good racing in between. The three protagonists have all faced their individual challenges but here we are with three rounds to go and a three-point differential. Every time we think we have a good idea of how this will turn out, fate seems to step in.

Jason Weigandt: Yes, I’m absolutely in shock! Herlings’ first-turn crash and DNF on Wednesday has to be maybe the tenth shocking this to happen the season, but it’s still all so unexpected that I don’t expect it even though we’ve learned to expect the unexpected. In a normal year, this would have been over as soon as Herlings came back to grab the points lead and began to stretch it, but nothing is normal in 2021. The good news is that his bike simply broke, but he was not hurt, so these guys can go on to fight another day.

Kellen Brauer: I am but I’m more shocked at how each riders’ strengths and weaknesses are really showing this year, which is what has kept this title so close. For Herlings, he could already be way out of the hunt with injuries and untimely crashes, but he’s fought his way back in by simply being the fastest rider every weekend. For Febvre, he’s thrown away too many opportunities that have been there for the taking but has actually overcome a weakness this year of being able to remain healthy throughout. And for Gajser, he’s been hurt by his starts and minor crashes but saved by his speed similar to Herlings. In any given year, any of these guys would have already ironed out these weaknesses and taken off, but they keep making mistakes or missing opportunities that has kept this title race as close as it is.

Herlings came from way back, won a bunch of races and got the points lead. Is he the favorite or is it just too crazy to say anymore?

Thomas: I think he is, yes. He has done the majority of the winning lately and had he not broken his throttle housing in the first turn of race one, he is likely holding a much larger points edge. The problem is, now it’s anyone’s series. The cushion that Herlings had built through his month or so of dominance is now a memory. He will have to earn it from here if he wants this title. Honestly, though, I think that’s how he wants it.

Weigandt: Yeah, so now I think the sample size is too small for any accurate predictions. That same type of thing—a guy crashing and DNFing—can happen to any of the three contenders (Herlings, Febvre, and Gajser) so with six motos left, luck and chance will play a role. Sure, since Herlings has won 10 of the last 20 motos, he would seem to have an edge. But at this point, one mistake or bad deal can mess it all up. We're basically into a three-round series with three dudes nearly tied in points. One mistake will make it almost impossible to come back.

Brauer: He has to be the favorite for the last three because he’s just faster right now. They are all healthy, and if they all start together, Herlings will win. Saying “It’s Herlings’ title to lose” is a big stretch, but it kind of hinges on his ability to limit mistakes. If he gets six good starts and can stay on two wheels, it’s hard to picture Gajser or Febvre straight up beating him. They can do it for sure, but in current form, I’ll give the nod to Herlings.

Crashes and injuries have had such a huge impact on this championship the last few years. Are we seeing all out efforts at all times, or are riders playing it smart at times? And is that time over?

Thomas: I think these guys have been flat out since the jump. Watching them ride in person and on screen, they are pushing the edge every time the gate drops. There is such a high level in that series right now, there simply is no room for complacency or “taking it easy.” If you are off even a few percent, you are going to get left behind. The level in the MXGP class is at an all-time high this year. The top five have pushed each other into their best levels.

Weigandt: This is kind of two-fold. Yes, the level is high and these guys are clearly pushing hard, as JT says. I do think, though, that contenders played the long game at times this year and were willing to settle for a spot instead of potentially killing themselves to make a statement or grab one more moto win. If you’re Herlings and Febvre, you’ve got way too many examples of injuries ruining an MXGP title attempt. Both of those guys seem to take seconds or thirds in stride, be it in a moto or overall. Febvre has been so close to winning a bunch more races, but I don't think he's frustrated because he knows in the big picture just staying in it is the key. Is focusing on the big picture going to end? Maybe. I still think everyone knows a crash is as likely to lose this as much as a moto win is likely to win it.

Brauer: I personally believe that they each are picking and choosing their spots to go all out. It seems like if any of them haven’t “had it” in the second half of this season, they don’t ride over their head to win. That will likely change with just these three races left and really nothing to lose, but to get to this point, I think they all played it a bit smarter. Febvre and Herlings both have been injured a fair bit in basically their entire 450 careers to this point, so it’s looked to me at least like they’ve learned a bit more of their limits this year. Gajser seemed to not care about limits or crashing until this year, but he now seems more measured in his approach. All bets are off for the last three though.