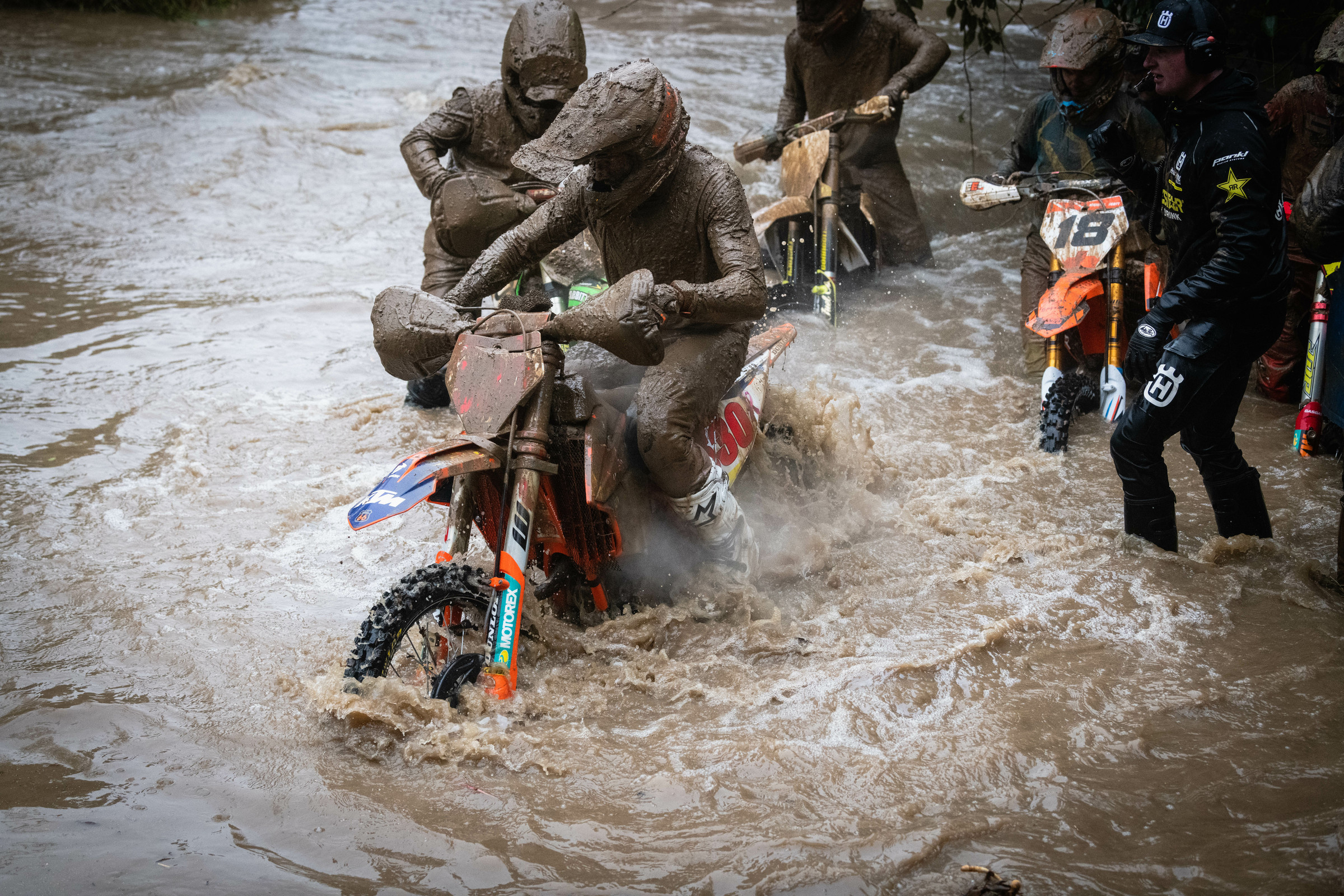 Between Reign in the Rain

Just a few days ago, the storyline for the 2021 Grand National Cross Country (GNCC) Series was defined by a penalty handed out at the next-to-last round. A winner-take-all championship scenario between FMF KTM’s Ben Kelley and AmPro Yamaha’s Steward Baylor was spoiled via a four-point penalty for Baylor. Now Kelley had enough points to grab the title as long as he finished second if Baylor won the finale. This of course led to plenty of conjecture, drama, and controversy. But in the end, those few points didn’t matter at all. Mother Nature wreacked havoc on the final race, Sunday’s Yamaha Ironman GNCC, and everything turned crazy. As the riders sat on the starting line over a saturated race track, with rain still coming down, the scenario changed from “If Baylor wins can Kelley finish second” to “Can either rider even finish?”

And at one point, that was a legitimate question!

Baylor’s bike shut off in the water almost immediately. Then Kelley nearly drowned his bike toward the end of the first lap. As the riders emerged from the woods at the end of lap one, the two title contenders were nowhere in sight, eventually coming through scoring in 92nd and 95th overall.

Massive rain all morning left the Ironman track nearly impassable. The three-hour race was cut down to two, and major sections of the track were removed. Small streams had turned to rivers, and bikes were drowning out everywhere. At one point, Kelley’s title hung in the balance, as his KTM ground to a halt.

“Jeez that was crazy,” said Kelley. “This weather, it was just insane. It was shaping up to be a crazy battle between Stu and I, Saturday was perfect, but then the rain came and it just would not let up, to the point to where we were like, ‘Man are we even going to race?’ But I wanted to race so badly. It’s been such a long season. I wanted to just get this race done. It was mahem. Total survival out there. It’s crazy for this to be the final race, we couldn’t really battle, guys were spread out so much. Bikes were breaking. Seemed like Stu hit a water hole right off the start. So I was ahead of him, I got up to third but I was trying to be cautious but it was nearly impossible out there, if you went slow you would just submerge your bike. Man, I got to about mile eight and my bike shut off. It would not fire back up, would not fire back up. I was trying everything. Took the air filter off, flipped the bike upside down…just everything. So many guys were passing and passing. I was able to finally get it going. That was mayhem!”

Kelley’s day was bad, but Baylor’s was worse, and he would later have to come into the pits to get a new clutch. Mechanical issues led to a DNF, the epic rain and mud sinking his hopes, literally. It was symbolic for a season defined by Baylor’s speed and class-leading seven wins, but also too much bad luck, ups and downs.

“Pretty frustrating, there were a few races where things happened that were out of my control, decisions that weren’t made by me, and that’s a kick in the nuts right now,” Baylor said, dressed in street clothes. “I can look back and count those mistakes. Luckily, we got the fans on our side, but, coming out, today, my bike shut off four turns in. I was like, ‘Okay, all right, of course this is what would happen.’ You know, it sucks but it is what it is. Ben and I are buddies, I’m happy for him…I’m not happy for him right now [Laughs] but he’s a good dude and he had the consistency all year. I had the wins, but he had everything else he needed. Good for him and good for those guys. I’m just looking forward to next year. This shit sucks.”

In the end, Kelley was somehow able to slither from outside of the top 90 overall to finish the race in ninth. It was enough to win the title by 20 points on paper, but it surely didn’t feel that way during a nail-biting season, and especially now when his bike was upside down, and he was draining water out of it.

“Yeah, it’s crazy,” said Kelley. “Stu definitely won more races than me, but it was tough for me, I had the points lead the whole time, so I had a lot to lose, he had nothing to lose, he was just able to go out there and pin it. I learned a lot, it’s crazy, this is my second season in XC1, but really my first full season [after injuries in 2020]. Yeah, I’m the guy on the bike but there are so many people who helped me make this happen. Yeah, it’s just crazy.”

Kelley is a bit of a sudden sensation on the national off-road stage. He grew up racing in New England but was an immediate hit when he jumped into the GNCCs a few years back. He would score back-to-back GNCC XC2 Championships, eclipsing his teammate and fellow New Englander Josh Toth as the next big thing in GNCC racing.

Next would turn to now quickly. When Kailub Russell retired after taking eight-straight championships, it put the pressure on Kelly to keep the streak going for KTM, but this was only his second year in the XC1 class, and he missed most of last season with injury. Veterans who had battled Russell for years knew this season could be their best chance. It led to an exciting slugfest, with Kelley shouldering the championship pressure most of the way.

“Going into the season, our goal was to retain the #1 plate and we never took our eyes off that goal, every day we prepared for it,” said FMF KTM’s Off-Road Team Manager Antti Kallonen. “We were able to utilize Kailub [Russell], Charlie [Mullins] and our team’s knowledge, expertise and support—it’s a team effort and it showed, especially at the last round when the environment is tough and demanding. A young rider coming up, graduating from XC2 a few years ago and now to immediately rise to the top and claim the #1 plate with the KTM family is really amazing. Ben deserves it, he never lost focus, never took his eyes off the prize and made it happen.

“This is a special one,” added Kallonen. “After winning eight championships with Kailub, to be able to continue with the next generation truly speaks volumes about the team, about the riders we have and the entire structure. Kailub kind of passed the torch to Ben and the team and I just have to say congratulations to everyone involved, this is a great feeling.”

While Kelley and Baylor received most of the attention at Ironman, the veterans carried the day out front. Monster Energy/Babbitt’s Kawasaki’s Josh Strang led most of the race, chased by Rockstar Energy Husqvarna’s Thad Duvall and Trevor Bollinger. Bollinger’s bike eventually expired, while Strang and Duvall would trade the lead through pit stops and crashes, which made goggles and gloves perhaps the biggest factor. Duvall emerged with the race win, his first in over two years which were completely marred by injuries. For a long time, Strang and Duvall were the two closest to besting Russell for the GNCC title. They didn’t get the #1 plate this time, but they did end the season strong in the mud.

“I’m just glad to finish!” said Duvall. “I’ve been racing for a lot of years and that was one of the toughest ones I’ve ever seen. The last two creek crossings were so deep, I was nervous. We came to the last creek and I just got off. I just got off and pushed it through! People were helping push me through! Yeah, this feels so good. It’s been a lot of days since I got first, a lot of injuries, this means a lot, for sure.

“I feel like there’s more pressure on me when it’s super muddy because I’ve won really muddy races in the past, so I feel like everyone kind of expects me to be up front,” Duvall added. “To win today is special and to do it battling Strang all day was pretty bad ass. We were hooting and hollering at each other all day and it was fun. I just got lucky on the last lap when he picked a bad line. After that, I could actually breathe and race my own race.”

Strang held tough for second, and fourth overall in this year’s points chase. Magna1 Motorsports’ Jordan Ashburn had a consistent season to take third in points, but the rain and mud ended his day early at Ironman. Third overall in the race went to Strang’s Kawasaki teammate Lyndon Snodgrass, who topped the XC2 class on his KX250XC.

“I was slow and steady, people kept having trouble, I think four or five people broke down on the first lap!” said Snodgrass. “It was crazy.”

Most final rounds are hyped up with “anything can happen in racing” and the Ironman proved that. It was perhaps the most GNCC way to end a GNCC title chase—with an epic mudder and a battle for survival. In this year’s, “Who will win now that Kailub Russell is gone?” sweepstakes, Ben Kelley is the lone survivor.