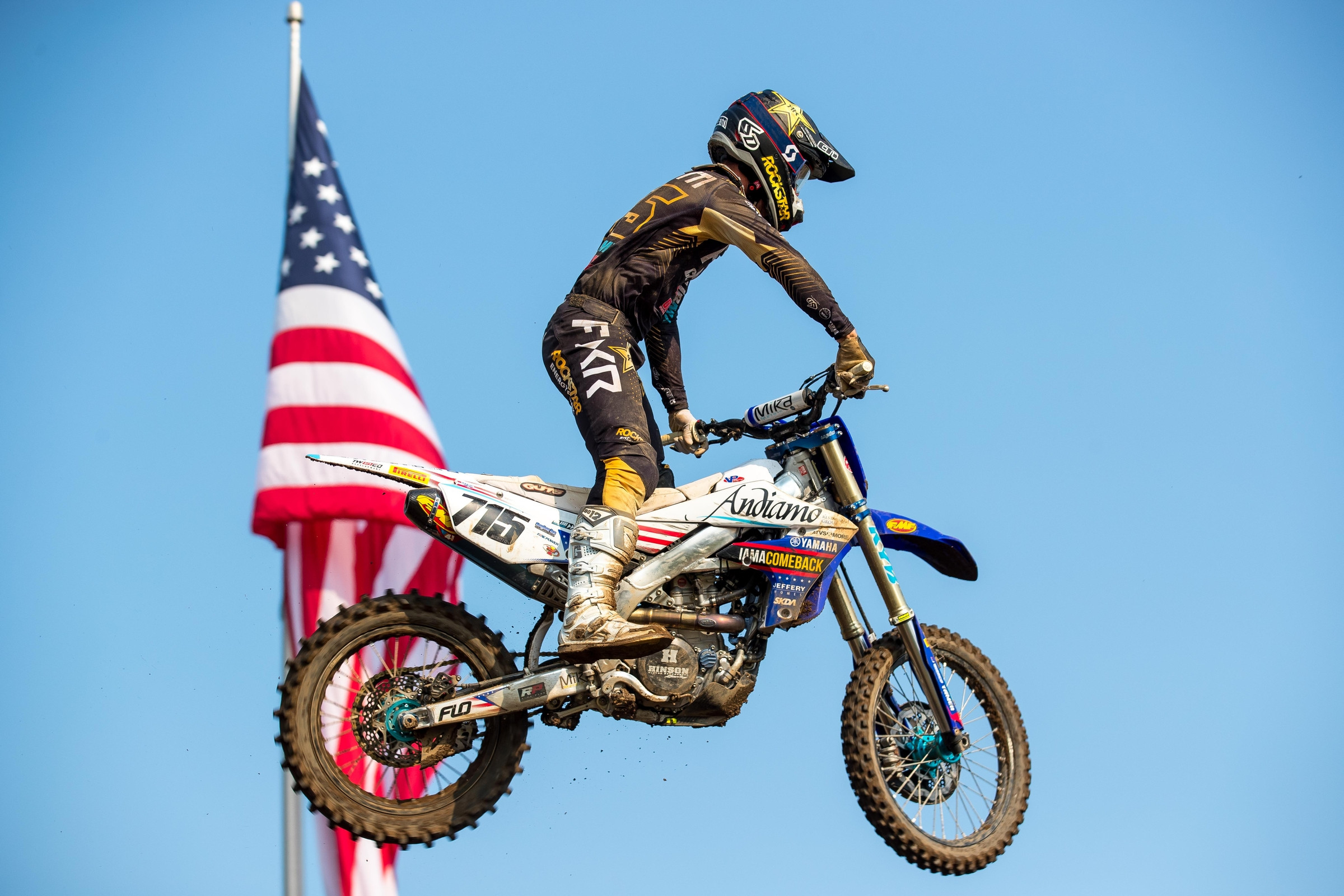 Phil Nicoletti had a rough 2021 season, but he will return in 2022 on his ClubMX/IAMACOMEBACK FXR Yamaha. Plus, his best buddy Alex "Troll Train" Martin will join him as a teammate, so they're working and training together at the ClubMX facility. Of course, Phil will complain about all of this. Got a question for Phil? Send it to Phil@racerxonline.com.

Hi Phil. I’m not sure how closely you follow the GPs and stuff, but did you at least watch Motocross of Nations a few weeks ago? Did you see Italy’s Alessandro Lupino in that last moto? What the heck was he doing? Crazy course cut, and then he crashed when he didn’t even need to be pushing. After that he was all bobble headed out like his neck was made of cartilage. Didn’t help that he had the mega-long visor extender to accentuate the head bobbing by approximately 400 percent. Oh, but he also made clutch passes while riding horribly. I don’t know what to make of all this! You’re a straight shooter so I’m praying you were watching this from your couch and screaming at the screen.
Tony Fan

Tony Fan,
I did watch “Ded Nations.” It was exactly that to me when I was watching it, dead. Obviously, you had phenomenal riders there, without a doubt. But to me it just felt like a normal warm up races the Europeans have before the start of their series. No, Romain Febvre, Tim Gajser, Jorge Prado, Ken Roczen, Lawrence Brothers, any of the Americans, and soooo many more. It was just kind of blah to me. I thought the track, and track prep was terrible too. Nobody could really pass, and super one-lined.

Lupino’s third moto was baffling. I don’t know the dude at all. So for me to sit here and bash the guy isn’t right. But Lupino has been around the block many times and knew what was at stake lining up for moto three. So to pull a move like that in the first corner and risk it was pretty mind blowing to me! Then he had a crash that put him in deeper waters even with his penalty that was being added on. So I think his riding form just completely collapsed on him due to over stress during the moto, because it really didn’t look like that was him on the bike. It was so bad, it almost made it look like his suspension was broke! But imagine if Lupino did cause Italy to lose Nations? This guy was under serious pressure if he blew it. Do you think Cairoli would have went Phil Nicoletti/Mike Alessi or Weston Peick/Vince Friese on him if he blew his last Des Nation attempt to win?……

Hey Filth, you mentioned that while Eli Tomac and Dylan Ferrandis will be good, you’re not sure the Yamaha boys will having anything for Cooper Webb in supercross. Now with Webb’s two main rivals from the last few years (Tomac and Roczen) being clean riders, Webb has had the mental edge. But if Ferrandis carries over the confidence from outdoors and happens to be Webb’s main rival, how do you think Webb will approach it? Me thinks that if he tries to get physical with Ferrandis he gets punted so hard he cartwheels all the way to Canada! I know I’m getting ahead of myself but how do you think Webb handles Ferrandis if he gets firing?? I don’t think you can crack Ferrandis with games on or off the track.
Peachman

Peachman,
Did I say they won’t have anything for Coop? I don’t think I said that way. They will definitely have something for Coop! I just believe through a 17-round series, Coop can keep it most consistent. It’s not like I think Coop is just gonna blew these guy’s doors off every weekend. Tomac is a MFing badass, no doubt. But Eli cannot start 13th on lap one consistently and expect to be in the hunt at the end. Ferrandis is going to have to learn the same thing. A 20 minute plus one lap main event on a 50-second SX track vs a 30 minute plus two outdoor moto are completely different. I do believe that this will be Coops’ hardest year yet, to stay focused and keep the edge. Is Coop as physically strong as Tomac? I can say no. But is he one of the most mentally tough SOBs I’ve ever seen? Yes, without a doubt. All these dudes are out for blood, and to prove a point. Whether it’s from switching teams, or swapping trainers. Everyone has some sort of vendetta coming in 2022 to prove a point! So they’re all motivated, no doubt. But it’s going to come down to the guy that doesn’t throw it away first.

OMG this is amazing! You and Troll Train and reunited! Tell me you went to bat for your guy and really tried to convince ClubMX to sign him just so you can get your buddy back! Tell me you’re both going to move back into that shed on the property or wherever you lived back in the day! You must be so excited about working and living with the Troll Daddy!
Mike

Mike,
One, I’ll never live with that prick ever again. Two, the is the last person I’m going to bat for is Troll. Even though he looks 12 years old, he is 32. He struggles with everyday life. Literally a moment ago he asked me to help him get his cheek pad into his helmet. He is 32 years old and struggles with a cheek pad! Unfortunately, he thinks my house is a free hotel at the moment here in Charlotte with five stars. Food, cleaning, laundry, etc.! He buys a stick of Kerry Gold butter and thinks we are square! Bread crumbs end up everywhere. Beer cans from the night before still laying around. His dirty gear left sitting in the garage for the weekend when he pisses back off to Florida. I thought an animal died in my f@!&ing garage but it was just his gear sitting there tucked away. MINGING!!!! I tell him he’s selfish, but I think he thinks I’m joking. Haha. I’m not! Buttttttttttt….it’s been good having the dingleberry around. But he and I both agree if we both had to live together for a full year like we used to, we would both quit. But a week here and there with him coming to stay with me, and myself going to Florida to ride, works perfect. At least when he’s just visiting, I can always look forward to the moment he goes home. Kind of like banging yourself in the hand with a hammer because you know it will feel so much better when it stops.