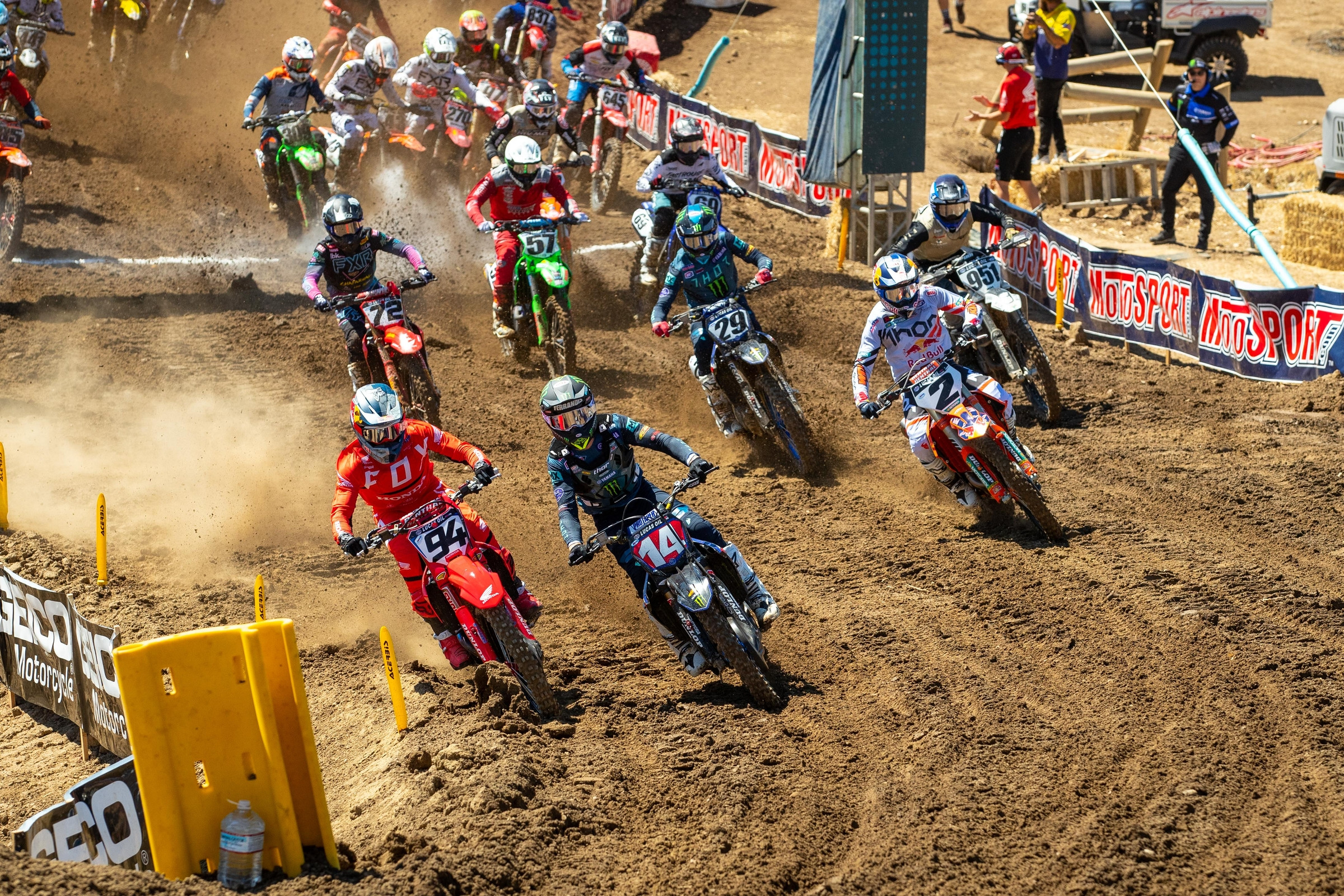 With the Lucas Oil AMA Pro Motocross 450 National Championship already claimed last week by Dylan Ferrandis, and Jett Lawrence holding a 23-point lead over Justin Cooper in the 250 Class, it sure didn’t seem like there was much potential for drama. Then again, racing can always exciting, even when there isn’t a title on the line, and when there is, well, there’s always a chance the unlikely will unfold and suddenly transform what seemed like a sure thing, into a big question mark, just like it did today. Let’s get into this week’s Saturday Night Live for the details.

Despite there being no title on the line, the 450 Class still delivered some drama this afternoon on the Hills of Hangtown. Ken Roczen led early, but found himself under heavy pressure from Dylan Ferrandis. Eli Tomac, who was racing with Monster Energy Kawasaki for the last time, was creeping up on the battle too, but ended up losing the front end and handing third place over to Cooper Webb. That left the battle to rage up front, and lap after lap the two superstars went at it, with Ferrandis finally finding a way by to take the win.

So far, nothing too abnormal had transpired, but when the gate dropped for the second moto things started getting crazy. Coty Schock and Ken Roczen came together in the first turn, causing Schock to go down hard. His bike than shot into Ferrandis, taking him down as well. Roczen also rolled into the mechanics’ area and ended up retiring with some sort of ankle and/or foot problem. No official word on it just yet, but he was walking around, albeit with a limp, under his own power afterward. Just like that, the winner and runner-up from the first moto were way, way back, and out of the race, respectively.

Christian Craig led at this time, but Cooper Webb was able to commandeer the lead after four laps. All of a sudden, Webb was in position to nail down his first moto and overall win of the summer, but someone forgot to give Tomac the meme. After hounding Webb for lap after lap, Tomac finally made a move stick and motored away. It sure looked like Tomac was going to deliver his team one final win via 4-1 scores, but then it became apparent that Ferrandis, who didn’t need to win at all, was on a hell of a charge. An obviously extremely motivated Ferrandis was coming, and he was coming fast, and as the race wound down, he was all over Christian Craig, knifing around him with roughly two laps left. The overall winner had shifted yet again for the third time in the moto, but this time it wouldn’t change. Ferrandis capped off what was truly an incredible season by ripping his way through the pack to yank what seemed like certain victory out of the hands of Tomac and Monster Energy Kawasaki.

Afterward, before the podium celebration there was an air of finality within the Kawasaki ranks—hugs were happening everywhere, hands were being shaken, and the words, ‘Thank you,’ were exchanged more than a few times. Moments later, Tomac, who didn’t even know how to open his champagne bottle when he won right here back in 2010 in what was his first race as a professional, joined 2021 Lucas Oil AMA Pro Motocross 450 National champion Ferrandis and 2021 Monster Energy Supercross Webb on the podium for the final 450 podium of the year.

In the 250 Class things got wild in a hurry. Justin Cooper shot out to the immediate lead, no surprise there, but Jett Lawrence, who later said he was “sleeping” on the gate, found himself deep in the pack, and before a lap had even elapsed he went down, losing a ton of spots in the process. He was able to get running again in about 25th place, only to have a rider go down in front of him a lap later, taking the Honda HRC rider down yet again. Lawrence once again rejoined the fight, and while he wasn’t ripping through the pack, he was making some steady progress. He was aided when Forkner had issues and DNF’d, and was also able to take advantage of a crash that took place when Michael Mosiman got into Dillan Schwartz, sending them both tumbling into the dirt. When the checkers flew he’d worked up to eighth and had lost over half of his 23-point cushion on Cooper. What once seemed like an in-the-bag championship for Lawrence now seemingly hung in the balance.

Things  appeared like they might swing even farther in Cooper’s direction in the second moto when Lawrence went down yet again when attempting to put a move on Max Vohland. Cooper, meanwhile, was up front yet again, working on getting around Josh Varize, who’d holeshot and was putting an incredible effort in to maintain his presence up front. Cooper ended up checking out, while Lawrence seemed to settle in, relax, and let the race come to him, which it eventually did. After riding around in tenth place for a while, he started picking his way forward, and by the time the race ended he’d made his way up to third for fifth overall. That was enough to award him the 2021 Lucas Oil AMA Pro Motocross 250 National Championship over Cooper by six points. Cooper, who put in his best performance of the season at Hangtown, later admitted he’d been dealing with a fracture in his thumb sustained when he crashed hard at Washougal.

“Oh my goodness, it’s a good day in the end,” Lawrence said. “I think that’s the worst I’ve ridden in a while, but I still got the title. It feels so great, as we’ve been working quite a while to get this. I’ve got to thank the whole crew for getting me here—my brother, my whole family, my manager and all of Honda and HRC. It’s awesome and we’re going to enjoy it for a little while, but then it will be back to the drawing board for next season to hopefully back it up.”

As captivating as the battle for the championship was, there were several other fantastic rides, Jo Shimoda’s being one of them. The Monster Energy/Pro Circuit Kawasaki rider was fourth in moto one, and was absolutely phenomenal in the second. After getting out of the gate well he battled his way past his teammate, Austin Forkner, and Varize to eventually cross the line in second, earning him second overall. Shimoda has just gotten better and better this season, and it culminated with a glowing ride here at Hangtown.

Credit also to RJ Hampshire, who’s been extremely sick for the last several rounds, causing him to suffer his way through the motos. Even so, he didn’t let his discomfort get the better of him at Hangtown, despite the heat. He placed second in the first moto and fought his way to sixth after running into the back of another rider and going down early in the second moto.

“It was a good day to finish the season off,” Hampshire said. “I still don’t feel that great but we managed through the day and saved what I could in that first moto. In the second moto, I got a decent start again and ran into the back of someone first lap and went pretty far back. I knew a podium was in the cards, so I dug deep at the end. It’s a good way to end the season off on the podium, so I’m stoked on that. I’m looking forward to a good off-season.”

Rookie Max Vohland capped off the best day of his summer by going 5-4 for fourth overall in front of his hometown fans. He was also awarded Rookie of the Year honors.