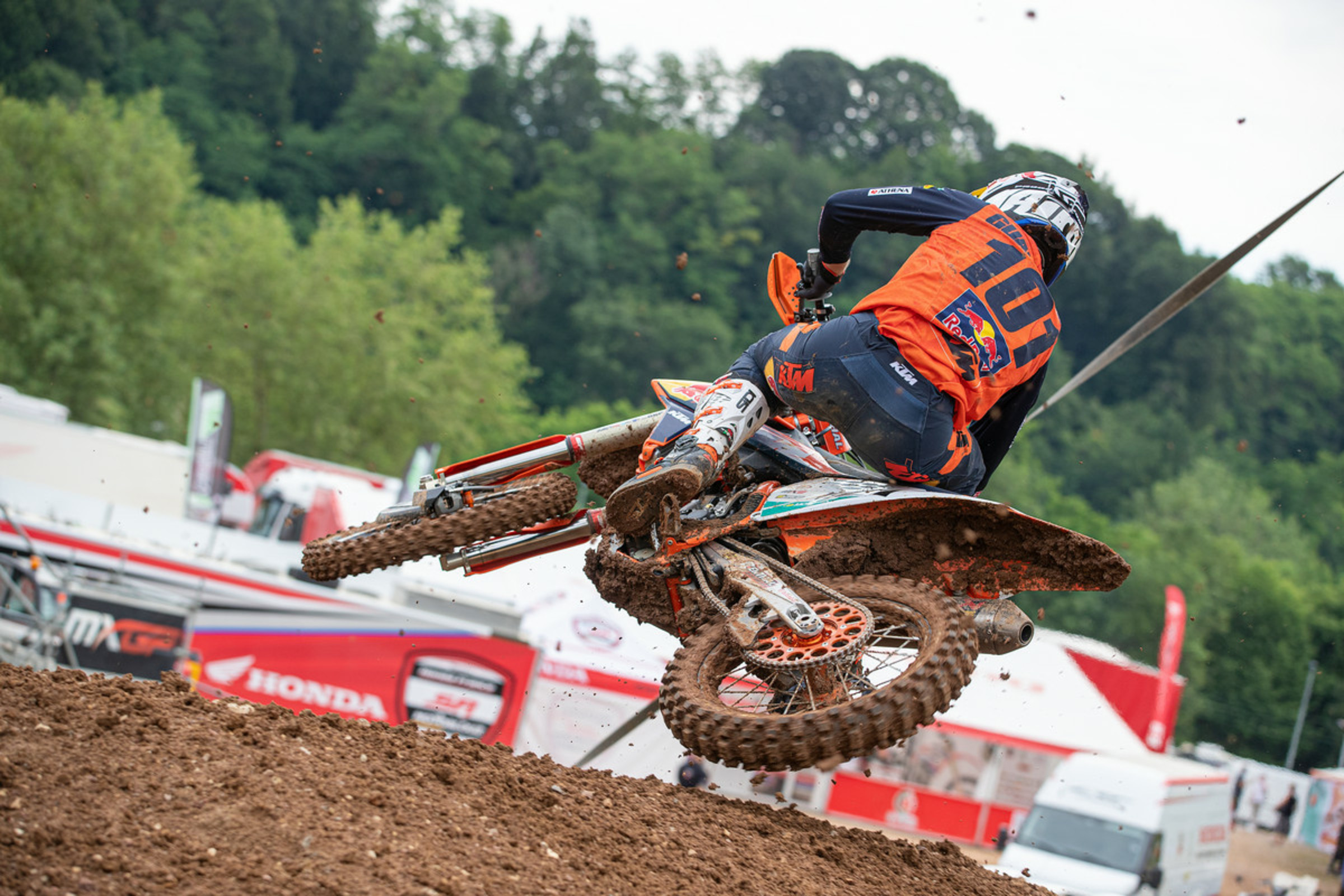 Our man Jason Thomas was in Europe this weekend as part of the broadcast for the Monster Energy MXGP of Italy in Maggiora. He still watched the action from Lucas Oil Pro Motocross at RedBud, though. We fired off some questions at him from both series to get his breakdown on recent events.

That’s a difficult question to answer because I don’t feel the comparison is fair. The only other time I have been to Maggiora was for Motocross of Nations in 2016. That event was an all-timer (other than the annual heartbreak). The crowd, atmosphere, and enthusiasm for MXoN is unmatched.

With that out of the way, I thought the race was great! There were only 1000 spectators allowed into the facility so naturally it felt light. Those that arrived still made their presence felt, though, screaming for the Italian stars every time they rode by. Maggiora is such an iconic venue, it would be tough for it to be underwhelming in any scenario.

Tough day for Gajser and a win for Herlings, but it rained in moto two. So, does this prove anything?

I don’t know if it was a mental breakthrough, or anything was accomplished on that front, but I did think it was important as far as the points go. These first three rounds all favored Gajser, in my opinion. He is great in all conditions, but most will admit that hard-packed conditions bring out his best form. He was able to outpace Jeffrey at both Russia and Matterley (in race two anyways) and most considered Maggiora another great opportunity to extend the points lead. Jeffrey’s win undermined that plan and with it, tightened the points at a perfect time.

Leaving Maggiora, the MXGP crew has a few days rest before embarking on a four-race run that will see a return to the sand. Jeffrey surely feels he has the edge anytime the series touches Belgium or the Netherlands, and those races could provide the points haul he needs to close the Gajser gap. The Maggiora coup made his job that much easier. We are only three rounds into a marathon series, but I am expecting a back-and-forth momentum pendulum depending on the venue and soil.

What is happening in the MX2 class?

The main story is the absence of defending champion, Tom Vialle. He proved that he was ready for another title run in Russia, only to be injured in a freak practice incident with fellow MX2 star Roan Van De Moosdijk. His vacancy at the top has blown the door wide open for race winners and new title contenders.

An unexpected development has been the surge of the rookies. Mattia Guadagnini and Thibault Benistant have both come into the series without much of an adjustment period. Their transition to EMX250 to MX2 has been a revelation and both have now won motos to prove it. Guadagnini grabbing the red plate on Sunday was maybe the most unexpected storyline of the year. Benistant’s elder teammate, Maxime Renaux is also one to watch, winning the overall at Matterley Basin and putting his Monster Yamaha near the front several times thus far.

Lastly, Ruben Fernandez deserves a lot of credit for his resiliency at Maggiora. He entered Italy with the red plate but suffered a bit of adversity. Crashes are almost a foregone conclusion in MX2 so look for the #70 to bounce back sooner than later.

Should everyone in the 450 class officially be scared of Dylan Ferrandis?

Nah, I don’t think he’s that scary. He’s a pretty slender guy and I don’t even know if he has any martial arts knowledge. Nothing to really fear, in my opinion.

Seriously, though, I don’t think there’s any reason to freak out. He’s riding really well but so are several of the other riders. Tomac was able to fend him off in that second moto which proves nothing should be assumed. He will be tough to beat but winning in the 450 class will always have significant challenges to overcome.

Ken Roczen cased LaRocco's Leap badly, and then later crashed. Is this just racing, or is he pushing to match Ferrandis?

I don’t know that they are correlated. Casing the leap was the result of trying to jump it from the inside line. Things had to go exactly right in the corner to get the required drive. Kenny should have bailed out of it when things went awry but I’m sure he’s painfully aware of that now.

As far as the crash goes, that could be a symptom of the pace. Kenny is not a crasher so to see him have a big one is indicative of how hard everyone is pushing. With Tomac winning two out of the last four motos and Cianciarulo winning another, I struggle to say it’s only Ferrandis putting riders under duress. The pace does seem higher than last year, though.

Do you like when LaRocco's Leap is a challenge and can't be jumped by everyone, or would you rather it be easier to put on a show for the fans?

My perfect world would have the 450’s able to jump it from that inside line but also allow the 250’s to jump from the outside line. That’s a very tight rope to be walking and a lot to ask of Tim Ritchie but you asked what I would prefer!

Do the 4-1 scores prove Eli Tomac is fixed?

I think that depends on what scale we are measuring against. Is he on the same comparative level as 2017? No, I don’t believe he is. Is he better than he was a year ago? Yes, I believe he is. He’s riding well and a few years ago, may have run away with that second moto. The relative pace is higher this year and the field is deeper. Wins are going to be more difficult to come by and will likely be a fight to the checkers.

I was just happy to see a bit of redemption after the heartbreak at High Point. Winning is awesome for everyone involved, sure, but to make good on what was ripped away makes it all the sweeter. The question now is will he be able to string a few of these together and claw back into the championship conversation. He hasn’t left himself any room for mistakes now and unfortunately, he has been a bit prone to mistakes in the past. Regardless, it was a feel-good story for RJ, whatever may come.