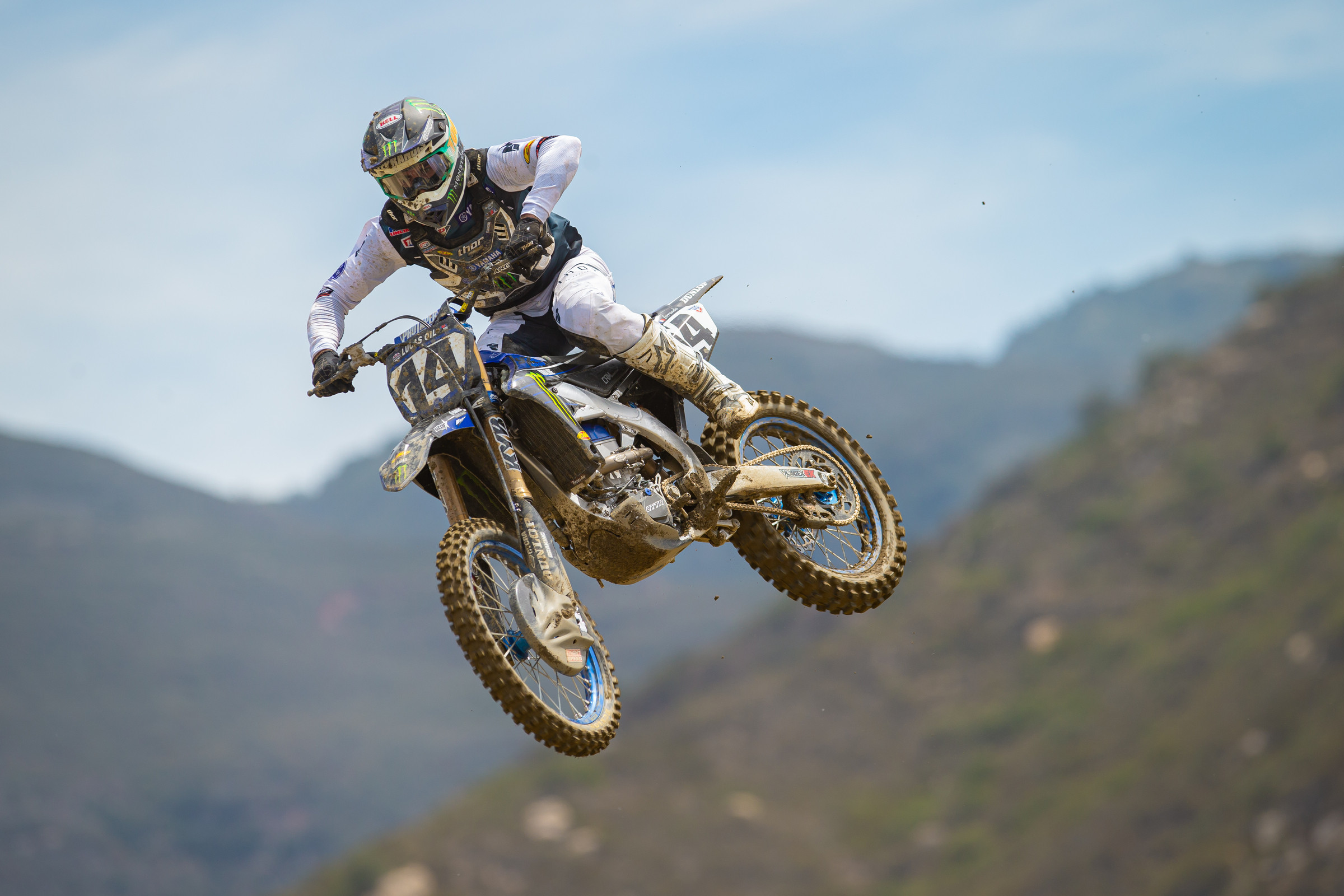 This year’s 450 class title chase in the Lucas Oil AMA Pro Motocross Championship has everyone excited because so many riders are coming in ready, fit, and confident. For certain #deepfield is an annual trend, but this season seems to pack exceptionally high hopes for many. Just look at a pair of French riders and their criss-crossing storylines to figure out why 2021 has become a center point of careers, stories, angles, and expectations.

First, you have veteran Marvin Musquin, who had finished 2-2-3 in points from 2017-2019, but dropped to fourth in the rankings last year. He came into the series fresh off major knee surgery and actually surprised himself by finding his old spot at the front almost immediately. The season turned into a tough slog, though, with two big crashes, one down Mount Martin at Millville and a brutal practice crash at WW Ranch Motocross Park hurting his title chances. Regardless, he was back at the races in search of his old form, and now after a full go-around in supercross, he feels much more prepared for this year’s motocross campaign.

“Well for me it was awesome [to be able to race in 2020], after my big injury and having the big surgery on my knee, I knew it would be good to be back for the first outdoors,” he said. “That was my goal. I knew it would be tough but I did it and I was somehow ready for the outdoors. I kind of surprised myself, I was right away able to battle for podiums and wins. I didn’t get an overall win but I did get a moto win at one of my favorite tracks, at Ironman. Yeah, it was great. After that, I was able to race the whole season of supercross so I have good momentum going into the outdoors. The start of a new season is always exciting.”

Supercross, also, started well with a podium at the Houston 1 opener but bad starts and crashes held him back at mid-season. He sure did rally late, though, with a win and a second in Salt Lake City. At one point, Marvin wasn’t sure he’d ever get back to his old level in supercross. Now he has some reassurance.

“I mean, even every podium is great but wins are obviously another level,” he said. “They don’t come easy and they don’t come often. I missed a whole season of supercross and to be honest, after such a big surgery on my knee, I didn’t know if I would ever be able to get back to riding at my full potential. Riding an outdoor track and a supercross track is different. You have a lot more compression [in supercross] from downsiding the jumps. So much compression on the knee. I didn’t know if I would be able to come back. I gave my best and I was able to get on the podium, but to get a win was huge. That’s what I want to do for outdoors, fight for wins and podiums.”

One thing Musquin won’t have to deal with is the distraction and pressure to sign a new deal. His current Red Bull KTM contract is up after this championship, but it appears an extension is coming soon. He doesn’t need to win this title to prove his worth, although of course he’d love to win for many other reasons.

“We are talking with Austria and KTM and finalizing the last details for next year, so since we’re already talking about it,” he says. “So [results] outdoors doesn’t really change anything. At the same time I of course want to do my best outdoors for myself and my sponsors and my team.”

So Marvin is finding his old championship-challenging form just in time for the kickoff to the series. That’s the good news for a veteran like him. The bad news is that more talent keeps entering the class! After the 2019 250 National Motocross Champion, Adam Cianciarulo, made an impact on a 450 last summer, 2020 250 National Champion Dylan Ferrandis is poised to do the same.

“I feel good, I feel really good,” said Ferrandis. “As I’ve said in the past, the transition to the 450 was really tough. It takes some time to get comfortable on the bike, but now I’ve had this time with the supercross season and the time we’ve had to work on the motocross season. So now I feel really good going into this season. I’m excited for Saturday to see where I’m at, but I feel pretty strong. For sure getting ready for motocross is easier, also because before supercross I had a small injury with my hand, so I lost four weeks of riding. We set up my bike pretty similar to the 250 I rode last year when I won my championship, and I felt pretty good when we rode Tuesday at Pala.”

Ferrandis won 250 West Supercross Championships in 2019 and 2020, and as one of the most honest riders in the paddock, spoke openly each season about the stress of supercross impacting his motocross prep. He might benefit from the revised 2021 racing calendar, with more time between the series, more than most.

“In the past four years it was so hard every time,” said Ferrandis. “To fight for a supercross championship, it takes all your energy and everything. When the season is done, your body just needs a few days to relax, but you can’t relax because you have the outdoors coming. So these three weeks are great to recover a little bit. Basically we ride about eight months of supercross and only about four months of motocross. We don’t have much time to be testing and try stuff on the bike.”

Ferrandis then touches on a topic near and dear to most American motocross fans. Could the extra time between races help elevate the U.S. motocross pace, and perhaps get it back to what we see from the MXGP stars each year at the Monster Energy FIM Motocross of Nations?

“I think it improves the level of motocross here in the U.S.. It’s a good step for that,” he says. “You can see the guys in MXGP, they spend so much time doing testing and the bikes race so good in motocross. For us, it’s hard. We ride such stiff suspension in supercross it’s hard when we get onto motocross, it takes time to really get back to this feeling. This season, it’s great to have this. We have a better bike setup and it’s improved the sport and the level.”

So where can the 250 National Champion go in his first outdoor foray? It’s not himself that he’s worried about. He feels good. He knows the competition will make it tough.

“The goal is always to win. I’m paid to do that and that’s what I want to do. If I can do it? I don’t know,” he says. “I feel like I can ride out front and get wins or podiums, but I don’t know. With the amount of good riders we have on the 450, even getting a podium is good. It’s my first season on the 450 so I don’t really know. I feel like last season I had my best season outdoors on the 250, and I have a lot of experience from my GP seasons, so I can feel like I can win or podium on the 450, but I just don’t know. It’s hard to say right now. The amount of good riders on 450s is unbelievable.”

With a healthy Musquin and an ambitious Ferrandis on the line, it sure is.