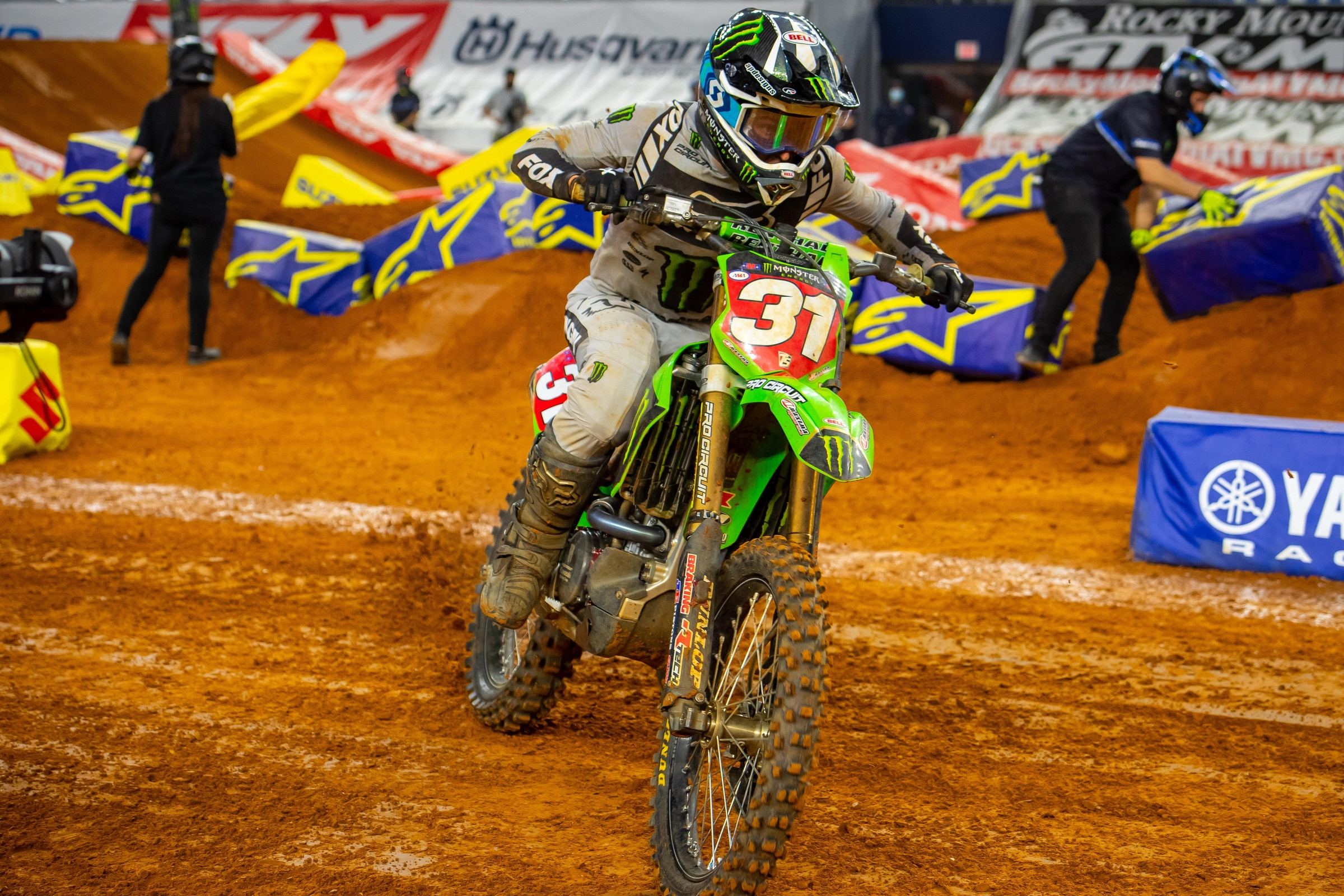 The AMA handed out three penalties to three different riders at the Arlington 2 Supercross on Tuesday night. Here’s explanation of why these penalties were given out, what rule the riders violated, and the outcome/impact the violation resulted in. We’ll go in chronological order of when each incident happened, starting with the 450SX LCQ.

Late in the 450SX LCQ, Brandon Hartranft and Cade Clason were battling for the final transfer spot. Clason made an aggressive move to the inside of Hartranft in the 180-degree turn that sends riders across the starting straight. As Clason turned his Kawasaki, Hartranft continued to go wider in the turn before going completely around the wall jump. While Clason had taken over the position before Hartranft exited the track, Hartranft accelerated while off the track and reentered ahead of Clason, which means he gained an advantage while off the track, violating section 4.15 i 4 of the 2021 AMA Supercross rulebook, which states the following:

There was actually no contact between the two, which is something to consider in this situation as well, meaning Hartranft went off the track under his own will as Clason did not physically push him off the track.

The last incident similar to this was in the 250SX LCQ at the 2019 Seattle Supercross. Mathias Jorgensen and Chris Howell were battling for the final transfer spot when a Howell block pass turn sent Jorgensen off the track as they exited the 180-degree. Howell went over the standard supercross triple as Jorgensen was stuck on the outside of the triple. Jorgensen gassed it, as you’ll see below as the dust kicks up, to keep up with Howell and then reenters the track right in front of Howell. Eventually, Jorgensen was penalized one position “for cutting the track” and the final transfer position was given to Howell. You can read more on the incident between Jorgensen and Howell in this post.

Hartranft’s move at Arlington 2 was similar to the Jorgensen move. But it was also different. While both riders accelerated while off the track, Jorgensen was physically pushed off the track by Howell compared to Hartranft who simply went wide himself. But both riders accelerated while off the track to remain in the higher position when reentering. Another thing to consider is that while this was taking place, Hartranft goes off the track right next to AJ Catanzaro and two workers on the side of the track, one of which Hartranft came got really close to when he grabbed the throttle. Again, these guys are racing in the heat of the moment and there is not always a black and white clear correct ruling in each situation but this this ruling appears to be consistent with both past instances and the rulebook (note: 4.15 i in the 2021 rulebook remains the same as it did in the 2019 rulebook). For Hartranft, not competing in the main event means he misses another main event in his rookie 450SX season as he has only competed in five of the 11 main events so far. Clason getting the nod means he made his fifth main event of the season, which ended up being his season-best finish as he crossed the finish line in 18th.

When the 250SX main event got underway, 250SX West Region points leader Cameron McAdoo got a ninth-place start as championship contender Justin Cooper started in sixth. On the first lap, Cooper went down coming out of the turn after the whoops when his front tire tangled the rear of Chris Blose. McAdoo avoided his downed rival, who remounted in 19th, and then made his way into fourth place, within two seconds of new race leader Hunter Lawrence. But a mistake in the whoops sent him to the ground. He remounted his Kawasaki facing the wrong way of the race, pivoted his machine, and then cut through the starting straight/pit area going straight for the jump before the 180-degree turn in a diagonal fashion. When McAdoo reentered the track, he did so just in front of Cooper and Coty Schock (running in tenth and 11th at the moment).

While McAdoo lost several positions with his crash and did not appear to clearly gain a position as in his incident, McAdoo’s move does appear to violate section 4.15 i 2 of the 2021 AMA Supercross rulebook, which states:

If a rider accelerates in an unsafe manner while off course or cuts part of the racecourse, the rider may be determined to have gained an advantage without gaining a position.

Check out the photos our photographer Mike Emery of Align Media caught of McAdoo from only a few feet away.

In the post-race press conference, results became finalized and McAdoo was penalized three positions (and equivalent points). Race winner Lawrence was told by host Daniel Blair that he had also taken over the 250SX West Region points lead because of the change in results.

"Ha what? Are you f*%&$#' with me?!" he said questioning if Blair was pulling a prank on him. But Blair was not, as now after four rounds, Lawrence (84 points) leads McAdoo (83 points) by one point and Cooper (82 points) by two points.

About five minutes into the 450SX main event, Aaron Plessinger put a block pass on Vince Friese that sent the SmarTop/Bullfrog Spas/MotoConcepts Honda rider to the ground in the turn before the whoops. Justin Barcia, Dean Wilson, and Dylan Ferrandis all went high to the outside of Friese before he was able to get up and go for his bike. As he picked up his Honda and backed down the steep berm Broc Tickle and Jason Anderson jammed into the back of him. Anderson paused before getting too tangled up, went to the right of the two teammates, rode directly up and over a Tuff Block and then accelerated down the outside of the whoops (note: this path is usually where riders pause during qualifying when they don’t want to go through whoop sections but it’s where the flaggers typically stand throughout the day). Anderson accelerated along the entirety of the whoop section before reentering in the exiting turn.

While it’s safe to say Anderson would have gotten around both Friese and Tickle had he stayed on the track (as both riders were off their bikes), Anderson accelerated while off the track and his move also falls under “the rider may be determined to have gained an advantage without gaining a position” violation as well. The Rockstar Energy Husqvarna rider was eventually docked one position, recording seventh in the official results although he crossed the finish line sixth. Similar to the Hartranft incident, there was a track worker right next to Anderson when he rode over the Tuff Block and accelerated down the area where the flaggers are stationed, which could have played part into the decision. Anderson’s bump from sixth to seventh means he also loses one point on the night, but this result does not have nearly a significant an impact as we saw in the 250SX West Region. Exiting round 11 with or without that one point would still result in Anderson leaving the night seventh in the standings.