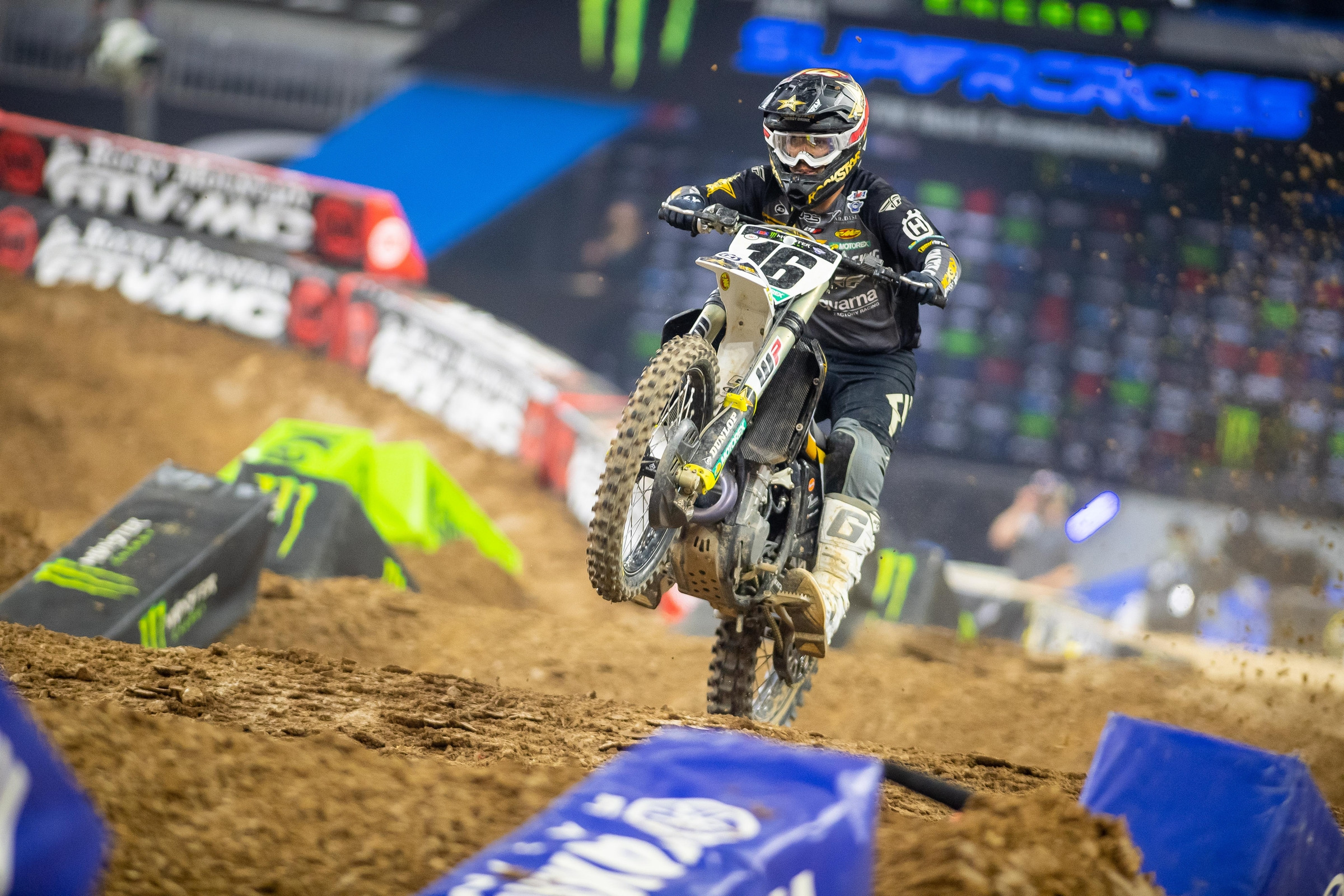 Things couldn’t be much closer in the 250SX East Region. With three races down, there have been three separate winners, and there’s even a tie for the points lead between Colt Nichols and Christian Craig. Jett Lawrence lurks in third, just six points back. At round two, Lawrence holeshot and got away from the Yamaha boys, then at round three the Yamaha boys got out front early while Lawrence was mired in the back, but expect a heads up battle soon. Plus, with Austin Forkner and RJ Hampshire both sustaining injuries during practice at H3, there’s a pretty good chance Nichols, Craig, and Lawrence will all be on the podium all three nights in Indianapolis. That red plate just might do a bit of bouncing around in the next few races. –Aaron Hansel

In case you missed it, Lawrence and Michael Mosiman had quite the dustup last Saturday at H3. Mosiman, who was running third, found himself on the wrong end of what can only be described as a blatant takeout move from Lawrence on lap 16. Afterward Lawrence, who was warned about the move by the AMA, admitted it was dirty, saying Mosiman is very difficult to pass. Mosiman said, “I got into some lapped traffic and Jett caught up to me and absolutely plowed me. There is blood in the water and it’s going to be an exciting season.” Making enemies usually isn’t a good tactic for championship contenders, and if things get rough in Indianapolis Lawrence may wish he’d employed a different strategy in Houston. –Hansel

You know what happened with Dean Wilson and Ken Roczen at the end of the race last week, and by now you probably know the two publicly discussed the matter on Instagram. If you’re not familiar with the situation, watch the video below to get up to speed. Both riders seem anxious to move on from the situation, but these things sometimes have a way of hanging around. We’ll see if Wilson is able to focus forward, while also keeping a watchful eye in the rearview, when the gate drops in Indianapolis. –Hansel

Before the first gate dropped, 10-10-9 didn’t seem like very likely finishes from Zach Osborne at the first three rounds. Zach was looking to take another step in his career after a 450SX win last year and the Lucas Oil AMA Pro Motocross Championship. Well, he’s certainly ridden well enough, showing the speed to match anyone so far, but bad starts and crashes and hurt his results. On Instagram Osborne specifically referenced a need to improve his starts. If he holeshots in Indy, will it be his golden ticket to a win? –Hansel

As Tight as it Gets

The season is still young, but if things keep going the way they are we’re in for a helluva ride. Ken Roczen leads the points, but both Cooper Webb and Justin Barcia are just a single point behind him in second. Reigning champ Eli Tomac is just six points out of the lead in fourth, and Adam Cianciarulo, Justin Brayton, and Malcolm Stewart are all tied for fifth with 51 points each. Heck, the top eight are all within ten points of each other! Ferrandis, who is eighth, could easily jump up four or five spots. Depending on how things shake out on Saturday, there are multiple riders who could leave with the red plate. So far 2021 has been great! –Hansel

Many are wondering what the Indianapolis dirt will race like, especially for the first round of three, when the dirt is likely to be wetter than usual. January dirt in Indiana has likely taken its share of rain and snow, as dirt is usually stored outside. Sometimes track builders get lucky and can store dirt under a bridge, but mother nature still has a way of making her mark. The dirt will begin to dry inside the stadium, but it could be pretty wet and rutted for the first race, and we’ve certainly seen some rugged tracks at Indy before. Who will avoid the big mistake in the ruts on Saturday? –Jason Weigandt

Back to His Average

Marvin Musquin made some noise with a third at round one in Houston, but a crash at round two and another early at round three—that actually left him 22nd early in the race—ruined any chance of another podium. Those were not normal circumstances for Marv, as he’s not going to go down in every race, or start in last every weekend. In other words, he should be moving back toward his normal result, and a soft, rutted, technical track (with jumper whoops!) should suit him well. Don’t be surprised to see Marv moving back to the box ASAP. –Weigandt

Justin Barcia was really, really fast last Saturday. He didn’t nail the start, but quickly moved to fourth, and the showed the pace to catch the top three. If not for a crash in the sand, he might have been a factor at the front. Like Musquin’s troubles above, we think Barcia’s back-to-back bad starts in the main events aren’t the norm, and if he gates toward the front again, a second win of the season is absolutely in play. –Weigandt

Indy marks the first race since the riders actually got to go home to their Florida or California confines and revamp their efforts. Most said they would be ready for the opener, but riders like Eli Tomac and Cooper Webb—proven champions in the series—admitted they needed some work on their bike setups throughout the Houston trio. Now that everyone got the chance to test again, will someone step forward in the results this weekend? –Weigandt

Aaron Plessinger won his first professional race in Indiana, the 2015 250 Pro Motocross National at Ironman Raceway. In 2016, he went to Lucas Oil Stadium and notched his first career 250SX race victory. The Ohio-born rider lists the Indiana events as his home races, and does his best work when the soil gets rutted—as it does in this building. So far in 2021, Plessinger has shown signs of turning his 450 fortunes around. Speed has been there in spurts, but the results haven’t yet shown. Does he put in the complete race day during the Indy tilt? –Weigandt