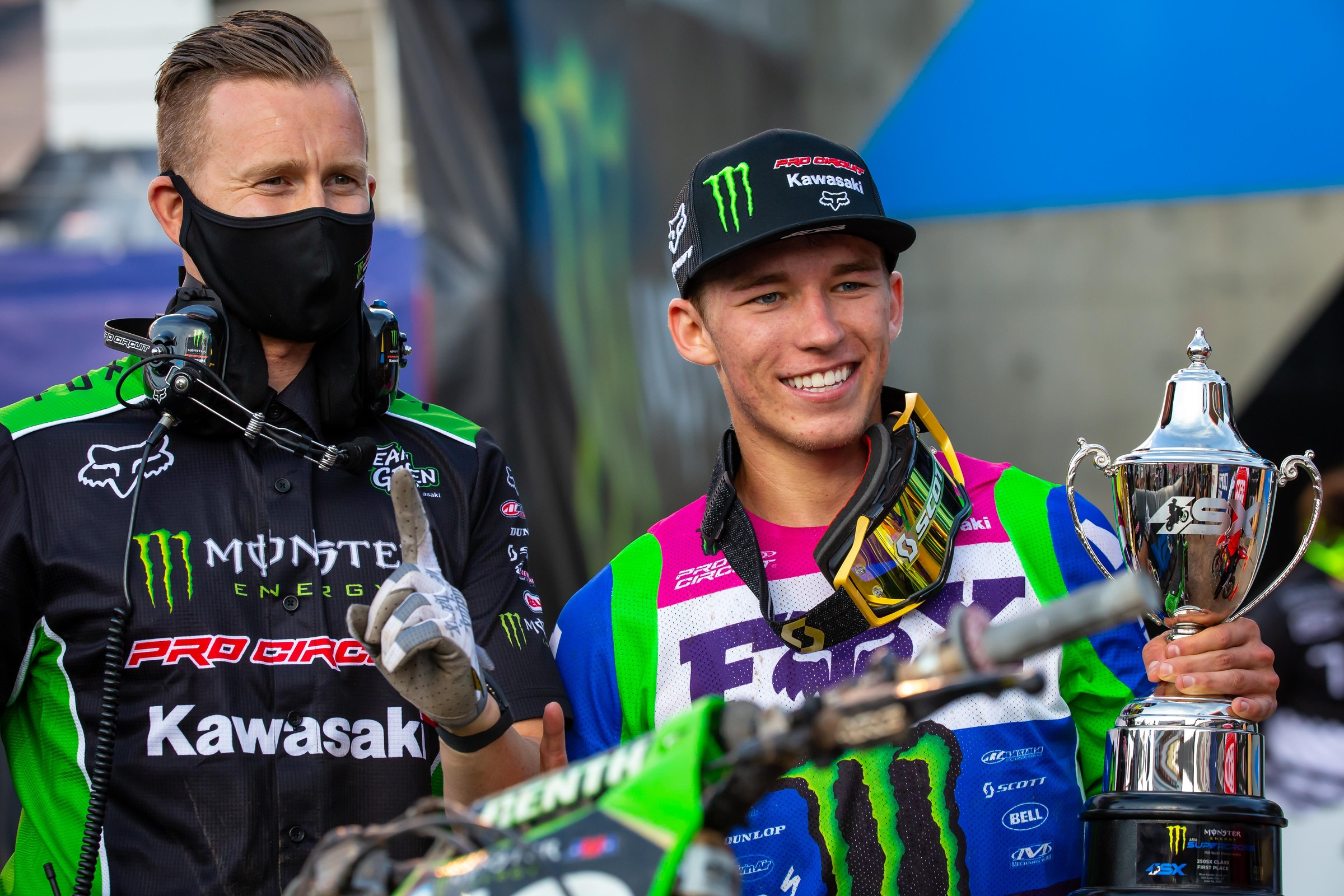 Each 250SX class team has their own agenda within their programs before a new season begins. It’s not often that a factory 250SX team has a full roster of nothing but established riders ready to compete for a championship this very second. With that comes inter-team seniority. The younger riders on the program will look to rely more on their elder or more experienced teammates to develop and grow. Those team leaders then carry the pressure of putting their program on top.

For some teams, there may not be a true established team leader. However, when there is a butting heads of who the fastest and most experienced rider is within a team, the team will often separate the two riders in a bid to win both 250SX regional championships. With the new year on the horizon and many team shifts, 250SX class graduates, and more, we wanted to outline the top guys within each factory supported team heading into 2021.

With the folding of GEICO Honda, Monster Energy/Star Yamaha Racing has now assumed the role of largest 250SX class effort for 2021. They also saw their top rider in Dylan Ferrandis depart the 250SX class though he remains on the team for his first year in the 450SX class. That dynamic also presents one slightly different from some other 250 class programs when both the 250 and 450 programs are under the same tent, perhaps lessening the pressure from the team.

With Ferrandis gone, Colt Nichols is now the longest current tenured rider on the program, but the Oklahoma native has had a rough streak of injuries in the last 18 months. Justin Cooper seems like the clear guy to head the team in 2021 after a year where he finished second in 250SX West standings behind Ferrandis. But the team also added two new riders for 2021 that might take seniority over Cooper.

Returning to the team after four years with GEICO Honda (although he missed all of 2019 recovering from a back injury) is two-time Lucas Oil AMA Pro Motocross champion Jeremy Martin. Martin left the team at the end of 2016 but returns next year in arguably his best form since his championship winning seasons in 2014 and 2015. Coming off a second place in the 2020 Lucas Oil Pro Motocross Championship, Martin is looking to use this one-year deal with the team to finally put his 250 class career to bed with a couple more championships. He has joined back with long-time pro Christian Craig who is about to turn 30 in a few months. Both riders bring a ton of experience with them that could overshadow Cooper’s recent success.

In all likelihood, Cooper and Martin will split coasts as both have legitimate shots to claim titles in 2021. Each rider will be a team leader in their own regard then as Craig and Nichols look to get the ball rolling from tough 2020 Supercross campaigns and supercross rookies Jarrett Frye and Nate Thrasher will be leaning on everyone in the team to adapt quickly.

There is a sense that this team has been putting a lot of their championship hopes onto Austin Forkner’s back since the Missouri native made his supercross debut in 2017. Forkner had a huge amount of hype around him, and to a certain degree, he hasn’t disappointed. In four years, Forkner has racked up 11 supercross wins and has been a consistent title threat since 2018. However, injuries have plagued him over and over again with his recent trip over the handlebars at the 2020 supercross finale resulting in a long list of internal injuries that sidelined him for the Pro Motocross campaign.

Forkner, like Cooper, isn’t the oldest rider on his team either with Jordon Smith having about two and a half years more on Forkner. Smith also sat most of 2020 on the sidelines after tearing his ACL at Daytona. And like Forkner, Smith has championship contention in him from prior years, although he missed a majority of time the last two seasons—2019 with a lingering wrist injury and 2020 to his knee injury. He will look to return to race-winning form in 2021.

After spending time with both the GEICO Honda team and the Troy Lee Designs/Red Bull KTM team in 2019, Cameron McAdoo signed with the Monster Energy/Pro Circuit Kawasaki team for 2020. At 23 years old (and debuting as a pro in 2017), McAdoo has continued to show significant improvements in his race craft over the last two years. With another year on the Kawasaki, McAdoo could continue to progress forward in race results and championship standings—although Forkner and Smith have the edge on him in those categories.

The newest addition to the team, Jo Shimoda, finished third in the 250SX East Championship last year and was very consistent in his first full year as a pro. But he’s still young and brand new to the Kawasaki, meaning the expectations likely won’t fall on his shoulders. Similar to this year, look for Kawasaki to put Forkner and Smith on separate coasts again in 2021 with rookie Seth Hammaker being the team member with the most to learn.

With GasGas and Troy Lee Designs taking over the factory KTM 250 effort, KTM brought their own factory team back in house for next year for the first time since 2015. With the move, one rider will represent KTM on a factory level in the 250 class for 2021: Max Vohland.

Vohland will be making his professional debut in 2021 and signs are pointing towards him racing the West Regional Championship which doesn’t start until late February in order to get the 17-year-old as ready as possible. Fortunately for Max, he isn’t completely alone as he will be pitting out of the same rig as 450 class teammates Cooper Webb and Marvin Musquin. Both riders have 250 championships to their names and will be valuable assets to Vohland as he learns the ropes.

The shuffling around from KTM/Husqvarna/GasGas has resulted in all three of their teams having clear number one riders in their programs. Rockstar Energy Husqvarna split up RJ Hampshire and Michael Mosiman last year as their two title threats but Mosiman has moved to GasGas for 2021 leaving Hampshire the true top guy at Husqvarna.

Jalek Swoll enters his second year as a professional after finishing seventh in 250SX East and then suffering a season ending injury in Pro Motocross. Hampshire and Swoll will be joined by rookie Stilez Robertson who won the Nicky Hayden AMA Motocross Horizon Award in 2020. Both riders have plenty of potential but are still in their learning years as they get to grips with professional racing.

Hampshire will no doubt be a title threat in 2021 and also will be the team leader as both Swoll and particularly Robertson look for advice.

The unfortunate demise of GEICO Honda has forced Honda Racing Corporation to follow along with KTM and bring their factory effort back in house for 2021. This will be the first time since 2008 that HRC has had their own 250 class effort when Ben Coisy filled in for the injured Ben Townley.

Like that 2008 season, the team is comprised completely of non-Americans as Australian brothers Hunter and Jett Lawrence will roll out for the red rockets. The dynamic between the brothers will likely be the most interesting inter-team situation to watch this coming year. Hunter is older and is just a couple years removed from being one of the hottest commodities in motocross. Now his younger brother Jett has come in and stolen the show. After nearly winning his third ever professional AMA Supercross race, Jett also had a very strong Pro Motocross campaign finishing fourth in the standings and winning the final race of the year.

Nobody has more hype around him going into 2021 than Jett Lawrence and that has left Hunter in the shadows a bit. While it seems Jett may have the upper hand currently, Hunter will have a lot to prove this year. Look for neither rider to be much of a team leader and instead lay it all out on the track. I can’t imagine a scenario outside of injuries forcing their hand where HRC puts them both on the same coast.

Last but not least, we have the Troy Lee Designs/Red Bull/GasGas squad which moved over from KTM’s this year as mentioned. Michael Mosiman jumps from Rockstar Energy Husqvarna while Pierce Brown remains with the team as the second rider.

Brown showed flashes of brilliance in 2020 but his resume boasts just 11 professional races in his short career. Mosiman is much further in his progression at the professional level and will certainly be looked at as the team leader in terms of experience. Mosiman had a strong 2020 supercross season with two podiums before finishing fifth in the 250SX West standings but would sit out all of Pro Motocross with an injury.

Shifting over to a new team with new expectations could be a speedbump after his strong year, but it also might propel him to greater heights. Similar to HRC, expect for Mosiman and Brown to split coasts as well.