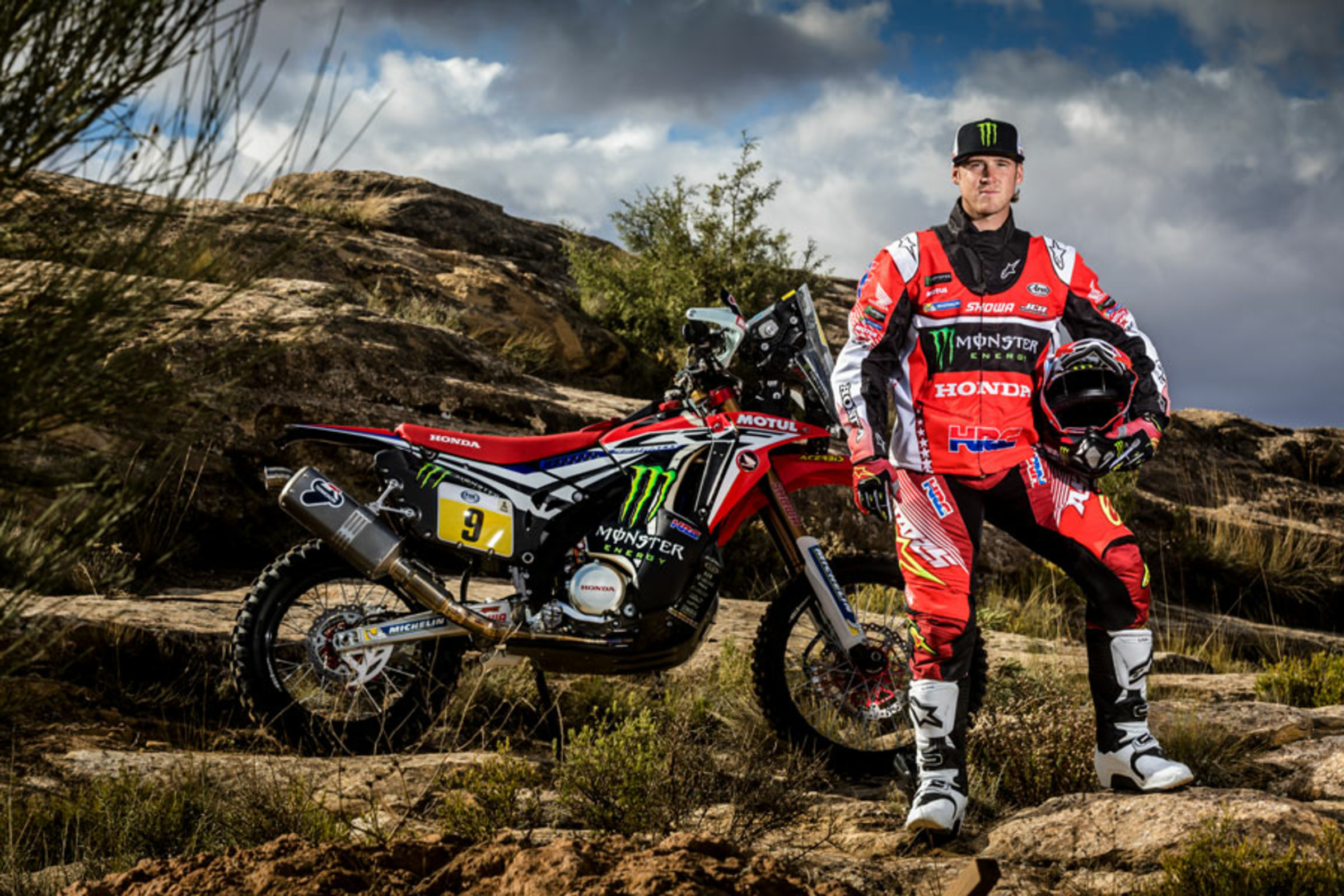 Seventeen-time Baja 1000 champion Johnny Campbell of San Clemente, California was ready to discuss the 2021 Dakar Rally in Saudi Arabia when I tracked him down the week before Christmas. He was about to load one Ricky Brabec of Hesperia, California onto a jumbo jet headed over to Dakar. Brabec will try replicate his 2020 Dakar Championship run on the frighteningly fast silica and sand dunes and gravel and camel grass of Saudi Arabia. The first American to ever win the Dakar Rally, Brabec will climb onto a six-speed Monster Energy Honda Team HRC Honda CRF450 Rally motorcycle – think of it as a quarter million dollar two-wheel Honda F1 car - and set out to run the 12-stage, 3,000-mile Saharan Odyssey come the New Year.

First, however, a quick backstory on HRC Honda and their illustrious history in the high risk/high adventure/high heat crucible that is off-road racing.

“The Baja 1000 started in the 1960s,” pointed out Campbell, who has been, for all these years, heavily influenced and inspired by full-on motor mastermind Soichiro Honda. “There were no paved roads down there from Tijuana to Ensenada. There were guys doing timed runs to see how many days it took them to get to Ensenada or to Cabo or even La Paz, so Honda did a publicity stunt in 1962 with their CL72 Scrambler, which was like a 35occ motorcycle. They started at the border in Tijuana and clocked into the telegraph office there in Tijuana. That’s how they got their official time and they rode straight to La Paz and it took them over 39 hours. That was 1962. Fast forward to the Mexican 100 which became the Baja 1000. So Honda has a really deep and rich history in off-road racing and the Baja 1000 and all things off-road.”

Got all that? Okay, then we motored on over to meet Ricky Brabec to get his read on just what was about to come at him during another run through the desert--this one in Saudi Arabia--and also this one means just as much to Honda now as  Baja did back when Campbell was winning it. Bottom line: these big desert races might not ring out as huge as supercross or motocross to some fans, but they're the pinnacle to some, and the two-week run at Dakar (which begins January 3rd) is an absolutely massive race on a global scale. Brabec will try to win it all for the second-straight time. We talked to him a week ago, before he headed over, to get  some of his thoughts.

Racer X: Okay, my man. Just when do you and Team HRC pack it all up, climb on a jumbo jet and make that fun-filled 8,240-mile jaunt over to Saudi Arabia for the looming 2021 Dakar Rally?
Ricky Brabec: Christmas day.

You were born in San Bernardino and grew up in Hesperia. Certainly full-on Inland Empire California desert towns. Just how did you become such a world class desert racer?
Yeah, just as you said, born in San Bernardino and moved up to Hesperia at the age of 14. I kind of realized that I didn’t really have to play stick-and-ball sports anymore. I just kind of took the moto by the reigns and just started riding as much as I could and raced here and there and I felt kind of fell in the love with the desert. It’s something that I really have a passion for, whether it’s moto, or side-by-sides, camping, truck trips, mountain biking – anything. I feel like it’s part of my home and where I feel most comfortable. I grew up doing motocross a little bit here and there. Being young and looking back, that’s where the two wheels started for me. But yeah, I feel like a lot of motocross people only know motocross.

That’s so true.
Yeah, and you know what? There’s nothing wrong with that. We all have our own passions. I just feel like as off-road racers, we don’t get as much credibility as we should. I feel like we are the most underrated form of motorsports, but as I said, motocross, all those guys have their own passion for it, you know? It’s kind of like people who go to the gym 24/7, that’s cool to see because people have a passion for something Motocross racers don’t really understand the desert but it’s really nice the way it’s coming along now. Andrew Short has been through motocross, supercross and has now transitioned into off-road and he has really big respect for everyone involved with this stuff.

Yes, Andrew has probably helped boost the profile of this event to American motocross fans quite a bit.
Yeah, exactly. I wish more motocross people would just give off-road a shot, you know? Even trail riding. Just exploring the desert and exploring somewhere were they haven’t been before. I feel like the respect would go a lot further.

What’s the navigation aspect of the Dakar Rally all about? I mean, I know what it is, but how big a role does it play? How important and crucial is it?
The navigation is tough. I mean, you’re trying to find your way through the open desert you may have ever been in before. I mean you are racing, you are on the clock, so you are trying to do your best to go fast, but the navigation is really important. We have waypoints out there where you really have to find them because if you miss a waypoint, not only are you lost, but you get a big penalty, so we try the best we possibly can to stay on target, first. Imagine riding down the 91 Freeway in Corona at 100 miles an hour.across a desert that you’ve never been in and through terrain that you’ve never seen before in your life.

It’s all blind, isn’t it?
Yeah, it’s blind racing and direction. You’re just hoping you’re going the right way until you make it to the next zone!

Just how do you prepare to do 12 Stages and 3,000 miles?
You are on the bike eight hours a day, 12, 13 or 15 days at a time. It gets easy the more you do it, but when you go into it for the first time, it’s nerve-racking wondering if you can even make it that far. The consequences are high, so what I do for training is that me, Johnny, Kendell will get together and plot out this big giant plan of how many days we’re going to ride. Andrew Short also helps us. He drives 30 hours to meetup with us out in the desert. It’s always good, I believe, to train with another Rally racer, so that way you can get some experience gauging speed and time and when you go to the line on day one. Andrew is great. Me and him, we kind of pieced together some books so we can go training. Andrew is a really good asset. He is smart. He’s full of information, whether it’s supercross, motocross, parts preferences, bike preferences. He’s been around a very long time and he’s not an airhead.

That he is not! In researching this event, I see where you consistently speak to keeping a fierce pace in Dakar, yet trying your absolute hardest not to stress the parts of the motorcycle.
Exactly. You don’t want to blow yourself out right away and you obviously don’t want to crash. You have to find that fine line, as you said, of racing and also keeping your body as close to 100-percent for the following days. Sometimes, yeah, there are days where you really have to turn on the gas and waste energy trying to make up time. You don’t ever want to put yourself in that position in a Rally because you don’t want to blow yourself out on Phase 3, when you have 10 more to go.

I’m sure people want to know more about that 450 of yours. I mean no disrespect here, as I know that bike is basically a two-wheel F1 car, but it looks a bit cumbersome to ride to me! What’s that thing is like to ride?
The rally bike is great. It's a 450cc rally bike, a one-off exotic motorcycle that Honda made as a 100-percent factory Honda. It is actually really nice to ride! It’s comfortable, it’s a little bit heavier than a small bike, but that means you can go down roads that are a little bit beat up and a little bit rocky without the bike wanting to get away from you. We hold nine gallons of fuel, so we’re able to go pretty far on a tank of fuel. I mean you have to race about 180 miles before you even see a fuel station. We carry as much as we can to make it where we need to fill-up.

Hey, once upon a time when I was in my 20s, and while I was working at an advertising agency named Chiat/Day in Venice, California. They sent me to the 12 Hours of Sebring sports car race in the swamps of Florida. I did my thing and went back to the agency to download to all the guys on what played out (we won) and what we were going to communicate in the ad that had to be done rapidly for Road & Track and AutoWeek back in Detroit. One of the guys, a guy named Eric, looked at me and said, “Wait, you meant he raced that car for 12 hours without listening to the radio?” We all laughed hard and that line actually became the headline of the ad! I thought what he said was so clever! Where I’m going with is, just what are you thinking out there in the middle of the desert, riding for hours and hours and hours on end day after day after day?
I zone out! I feel like zoning out is almost the only way to race. You need to be in that zone. You have to zone out your life, you have to zone out every single thing and you have to get tunnel vision. In the Rally, yeah, there are sections where you are just bored and singing to yourself and you’re talking to yourself and you’re wondering what your dog is doing at home. But you can’t let that really get to you because as soon as you think it’s easy or as soon as you start getting bored and losing focus—one mistake, one error either riding or even just navigating and that rally is going to bite you in the ass!