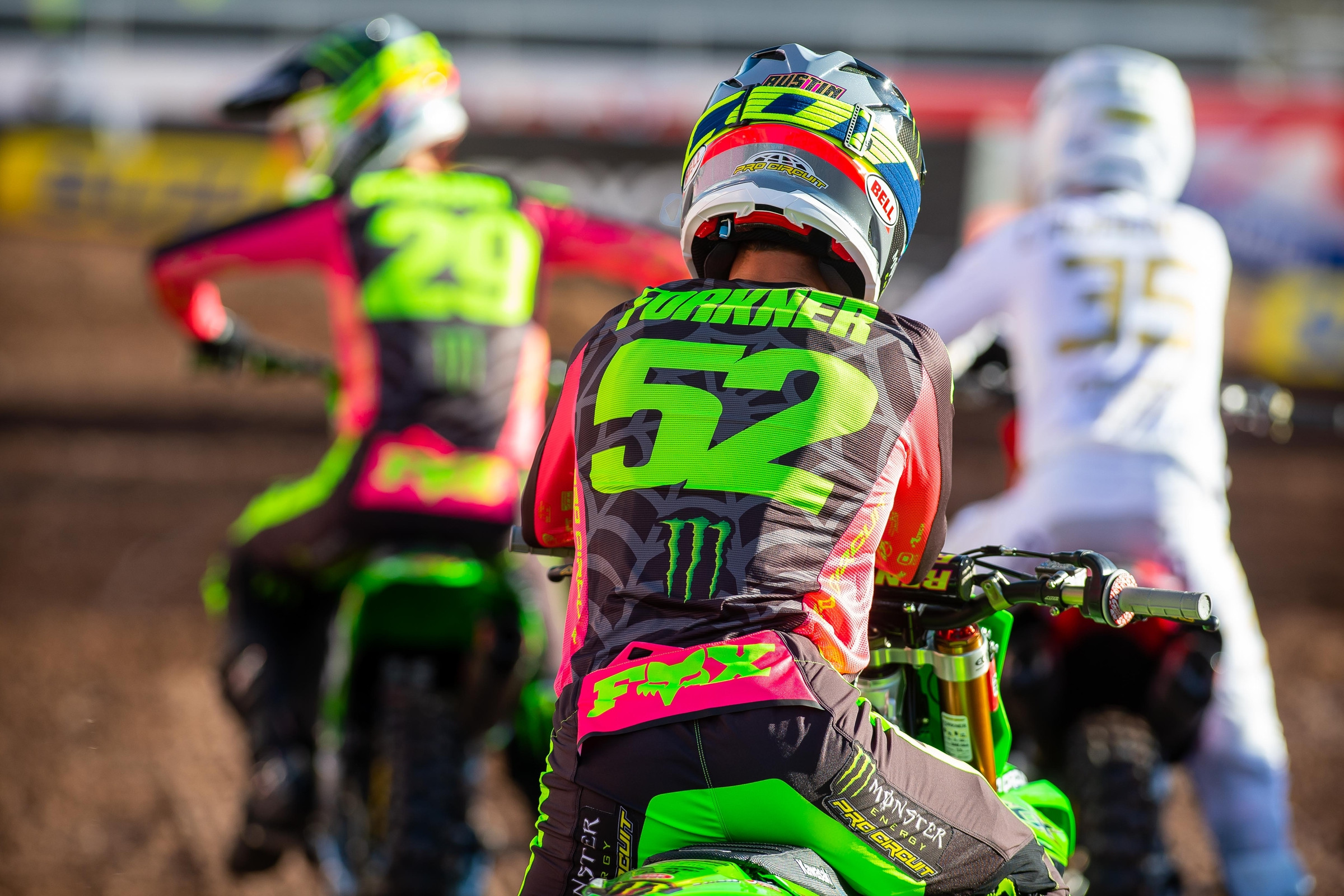 In covering supercross and motocross the world over for the past two decades, one comes to learn, establish, and fully comprehend that there can be a downside to being a professional racer. In other the words, while the big dollar contracts, endorsement deals and TV exposure makes it all look so cool, things can and do go wrong, and when they do, well, it’s very easy to get left in the dust while the big old moto world keeps on spinning away on its axis.

Take one Austin Forkner, for example. A perennial title fighter, the 21-year-old was, as we know, a mere seven points down on sensational French racer Dylan Ferrandis going into this year’s 250SX East/West Showdown before getting it wrong over a dragon’s back in the main event and being whipped to the ground and inflicting serious damage to the insides of his body. Rushed to a nearby emergency room, that’s where Forkner’s 2020 racing season came to an abrupt halt, the Monster Energy/Pro Circuit Kawasaki rider sent back to Oklahoma to rest, recover, and rehabilitate. That’s where we found him when we punched in the digits of his cell phone. While riding out the global pandemic and awaiting the start of the forthcoming Lucas Oil AMA Pro Motocross Championship next month like the rest of us, Forkner is a man without a mission for the time being, forced to take it all pretty easy for the time being as he continues to heal up. Bored, flustered, but all in all, in good spirits. On Sunday afternoon we did some bench racing with him.

“I don’t know what day it is, really,” mused Forkner while back in Oklahoma. “All of my days blend together right now because I can’t do anything. I’m in Oklahoma now at my house and I’m doing pretty good. I’m just getting to the point where I can do a few things. I’m not really supposed to be doing anything until I go back to the doctor in a few more weeks to basically get released and after that I can start doing stuff again. I’m getting to the point now where I can get around a lot better. Like, last night we cruised around the neighborhood on scooters and stuff and I can tell I’m getting better, for sure. I’m just not supposed to be doing any heavy lifting of any sort or riding, obviously, until I get released. I am feeling better and I’m off the pain meds and all that now. I’m not in any sort of super-bad pain. It’s just irritating. I can tell that if I were going to try to do a workout or tried to ride, I would be in pain in the inside. I’m just waiting, I guess.”

And sure as hell experiencing the unglamorous side of being a world class motocross star where danger is, well, a part of the business, huh?

“Yeah, for sure,” he said. “I feel like the past couple of years have sucked because for me it has just been tear down and rebuild, tear down and rebuild. You get hurt and lose everything and then you just have to rebuild everything again. I’ve been through this stuff to a pretty big extent now. Last year I hurt my ACL and that’s somewhat tough to come back from. I’ve done that and now this is just another teardown and rebuild-type thing.

“It was all going real well, too,” he continued. “Especially after the break we had and then coming back at Salt Lake City. “I felt like I was riding really good. I felt like I was on par with where I was last year and having those types of rides and just being really solid. I was good before the break and then I just came out of the break just that much better. I was really happy with the way I was riding. That’s at least kind of what I can hang my hat on. I had a good season up until this point, so it was a bummer to end it like this. You know, if I was not going to get the championship this year, I would have rather just not gotten the title and not be out of racing with injuries. That’s what sucks. It sucks not get the championship and it sucks to be injured. I’d much rather be healthy with no championship then hurt with no championship, you know?! It’s not what I needed. Oh well.”

Immediately after winning the penultimate 250SX West main event of the ’20 season and pulling up to within seven points of class leader Dylan Ferrandis, exclaimed Forkner from Salt Lake City that evening: “I felt really good today. That was one of the best supercross races I’ve ever raced. We’re proving that we’re still in this race and how badly we want it.”

Then came the East/West Showdown, and more importantly to Forkner, a genuine shot at the 250SX West Region title.

“When I crashed in the main event, I Initially thought I just had the wind knocked out of me,” he explained. “I was like, ‘Alright, chill, let the wind come back to you.’ My wind came back to me and I said to myself, ‘Something here doesn’t feel right on my insides.’ I’d never had an internal injury. I’d just done ligaments and bones, so I know what that stuff feels like. Something didn’t feel right. I felt like maybe I punctured my lung or did something like that because I couldn’t breathe very well. Basically, we found out in the hospital that I beat up my insides with the crash. My pancreas and spleen got it the worst, but I also had some lacerations on my kidney. Everything inside me was basically beat up. They later told me that lungs started to swell, and they just didn’t expand as much, and I had to take half breaths for the first few days. I couldn’t breathe very well at all. I even had to use a breathing machine in the hospital to expand my lungs and stretch them back out. Even now, I still don’t feel I have full stretching in my lungs because I haven’t been breathing hard. Whenever I come back and start doing cardio again, I’m going to feel that. A combination of all these things were just filling my body up with blood and swelling and my lungs couldn’t expand. I knew something was up. I mean it all makes sense knowing this stuff afterwards.”

Late last week word came down from the MX Sports Pro Racing offices in Morgantown, West Virginia, that a nine-race Lucas Oil AMA Pro Motocross Championship season would launch on August 15 in Hurricane Mills, Tennessee. All set to kick off the natural terrain season in this nation, Forkner, at least as of this writing, will likely not be present in Tennessee, looking more at 2021 as his return to action.

“I think I am looking at 2021 now,” Forkner pointed out. “I won’t be released by my doctors until the eighth of August. I haven’t been riding or basically doing anything. I’m out of shape, so it’s going to take me a few weeks to a month to even get somewhat bake into shape. Then I probably wouldn’t be coming in at 100-percent and then I’d have to rush it. It’s a lot of work for a nine-race, last-minute series-type thing. It’s sort of like, ‘Oh, you’re not going to be 100-percent, and you’re come in a little bit behind…’ I don’t think that’s smart and that’s what me and Mitch [Payton] kind of talked about. Just trying to rush back from an injury like this probably wasn’t a good idea anyway. It wouldn’t be the greatest thing coming back in behind the eight ball. The last thing I want to do is get tired at the end of a moto or something because I’m not in shape and crash or ride over my head and crash again. It’s not set in stone that I won’t ride at all this summer, but looking at it right now, it’s probably looking like I’m going to start back next season. Who even knows? I don’t know if Monster Cup is on, I don’t know if any races are going to happen after the outdoors is over. I don’t really know anything. As of right now, I’m just kind of focused on getting back from all of this.

“I’m good, you know?” he continued. “Right now, I’m just like, ‘Damn! Again! I have to go through this all again!’ Last year with my torn ACL, it was pretty rough getting back into riding and it all took a while. I didn’t even want to put my foot down on the track for two months. I was riding very hesitantly and was kind of timid and scared on the bike. You never want to ride like that. That’s not fun. And I’m going to have to go through all that stuff again, you know? That whole process takes a lot out of you. Going through all that stuff is a pain and it does suck. That’s honestly the part that I’m not looking forward to the most. At least now it looks like I’m going to be able to do all this stuff to get back to racing and take my time doing it. Rushing it coming back is so much worse. Coming back from a serious injury is bad enough, but it’s a lot worse when you have to rush back for racing. You know you’re not 100-percent and then you’re mentally behind and with all of that other stuff combined, it is just not a great way to go about it.

“Everything is fine,” said Forkner, wrapping things up. “I just don’t like missing races. I just hate it. I just don’t like getting paid to not do my job. I hate missing races. That’s the only thing that I’m bummed about. I’m glad we’re getting to race again now for the sport, but in my position, I would be absolutely okay if there was no racing just so I wouldn’t have anything to feel bad about. You know what I’m saying. I’m in good spirits with how everything is going. I don’t really have any more updates until I get back to riding. I could come back, and I could feel great and be going fast and be feeling good in a month, or it could take a lot longer than that. I don’t know. I’m just waiting until I can start to do some activities and ride and then I’ll go from there, really.”