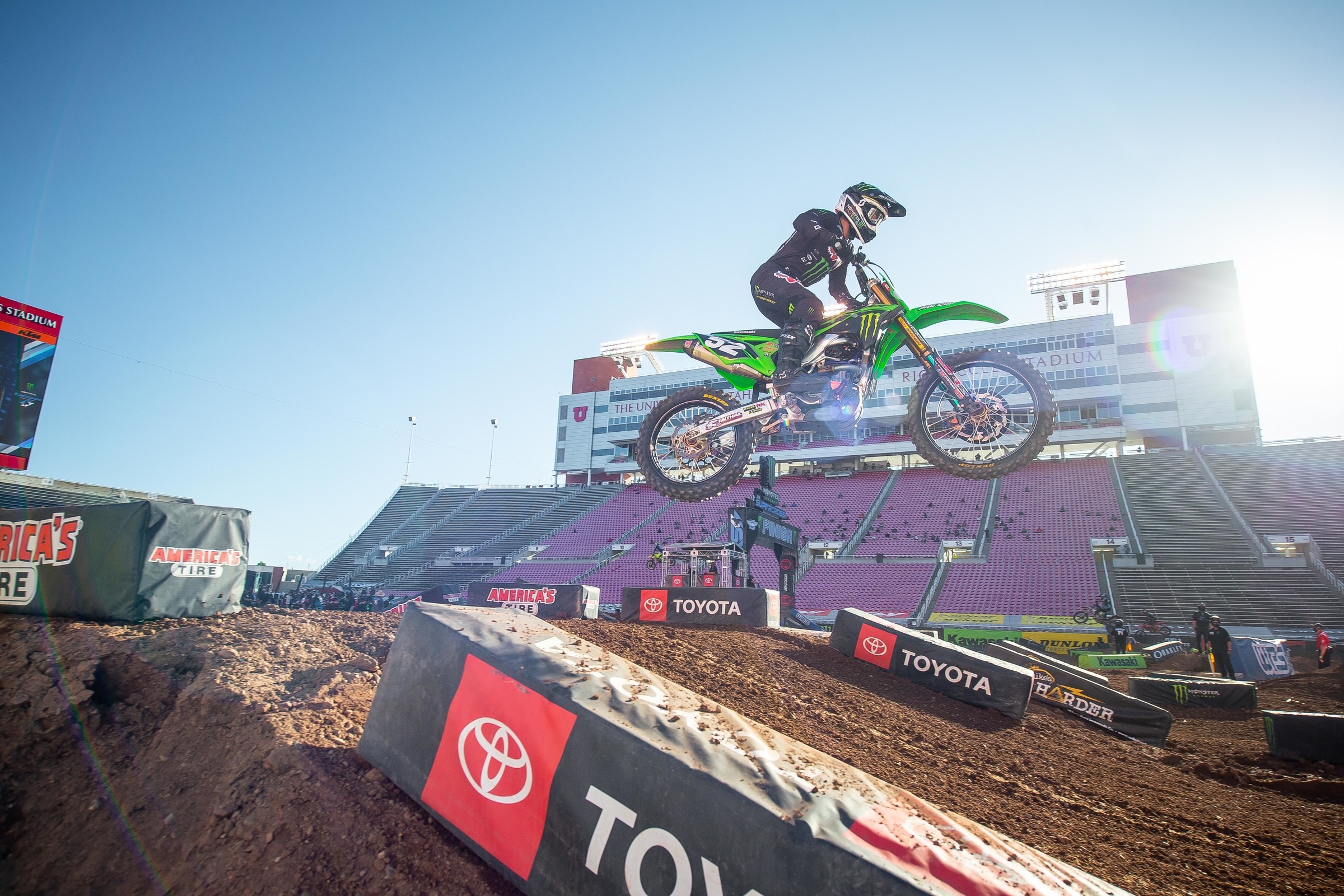 Austin Forkner crashed hard over a dragon’s back only a few laps into the 2020 Monster Energy AMA Supercross finale, causing the 250SX East/West Showdown to be red flagged and restarted. Forkner was helped to his feet and walked off the track under his own power before being helped onto the Alpinestars medical cart but his day and championship hopes ended early. On June 25, Monster Energy/Pro Circuit Kawasaki announced Forkner would be sidelined for six to eight weeks with abdominal injuries but not much was said about the extent of his injuries. But over the weekend, Forkner himself provided a more in depth update via an Instagram video.

“Hey guys, what’s up. Just figured I would give everybody an update,” the 21-year-old said in the video. “Nobody really knows what has been going on with me. So basically it’s about two weeks out from my crash now. …I actually ended up breaking my pancreas in half. I broke like a third of my pancreas off and basically damaged a bunch of my internals—my liver and kidney—just basically damaged all of my insides and messed up my spleen really bad, to the point where they had to take part of my pancreas, that like third of my pancreas, and my spleen—my whole spleen—completely out.”

“A lot of just internal damage,” he continued, “didn’t have anything broken but the pain from that was—I feel like I have a pretty good knowledge on pain, I’ve hurt myself a few times—but this by far the most painful thing I have ever experienced. It was brutal. It was definitely the toughest six or seven days I was in the hospital—they were horrible.”

We saw Forkner in pain when he tore his ACL in Nashville last year, and when he tried to gut out a comeback in New Jersey several weeks later. For him to say this pain was the worst he ever experienced speaks volumes.

Watch the crash below as our online content editor Kellen Brauer breaks down the film of what went wrong at the 5:37 mark:

“I just want to thank everybody for their prayers and ‘get well wishes’ and stuff,” Forkner said. “It’s working, I feel a lot better now, just getting to the point where the pain is settled down and my body is started to settle down.”

Forkner explained the extent of his injuries before cutting the video to clips of him from days prior when he was in the hospital: his stomach now featuring over 15 staples and a drainage tube on his side of his stomach for his pancreas and his spleen.

At the end of June, we wrote how the team would only be lining up one of its four riders on the roster at the opening round of the Lucas Oil AMA Pro Motocross Championship as injuries to Jordon Smith (torn ACL), Garrett Marchbanks (various injuries including a lacerated liver, bruised lungs, torn MCL and PCL), and Forkner would leave on Cameron Mcadoo to fly the team flag solo. We had heard a few riders were testing with the Monster Energy/Pro Circuit Kawasaki team recently but now that the Lucas Oil AMA Pro Motocross Championship start has been delayed temporally, no official moves have been made or are expected to be made. Until realistic race dates are locked in for the championship, it’s hard to know when the squad will need riders back in action.

Meanwhile, aside from mentioning the levels of pain decreasing and his body adapting after the surgeries, Forkner doesn’t give much of an update on the next steps of his recovery—or mention anything about when he expects to return to riding.

“Thank you guys for everything, I’ll see ya soon,” he ends the video.