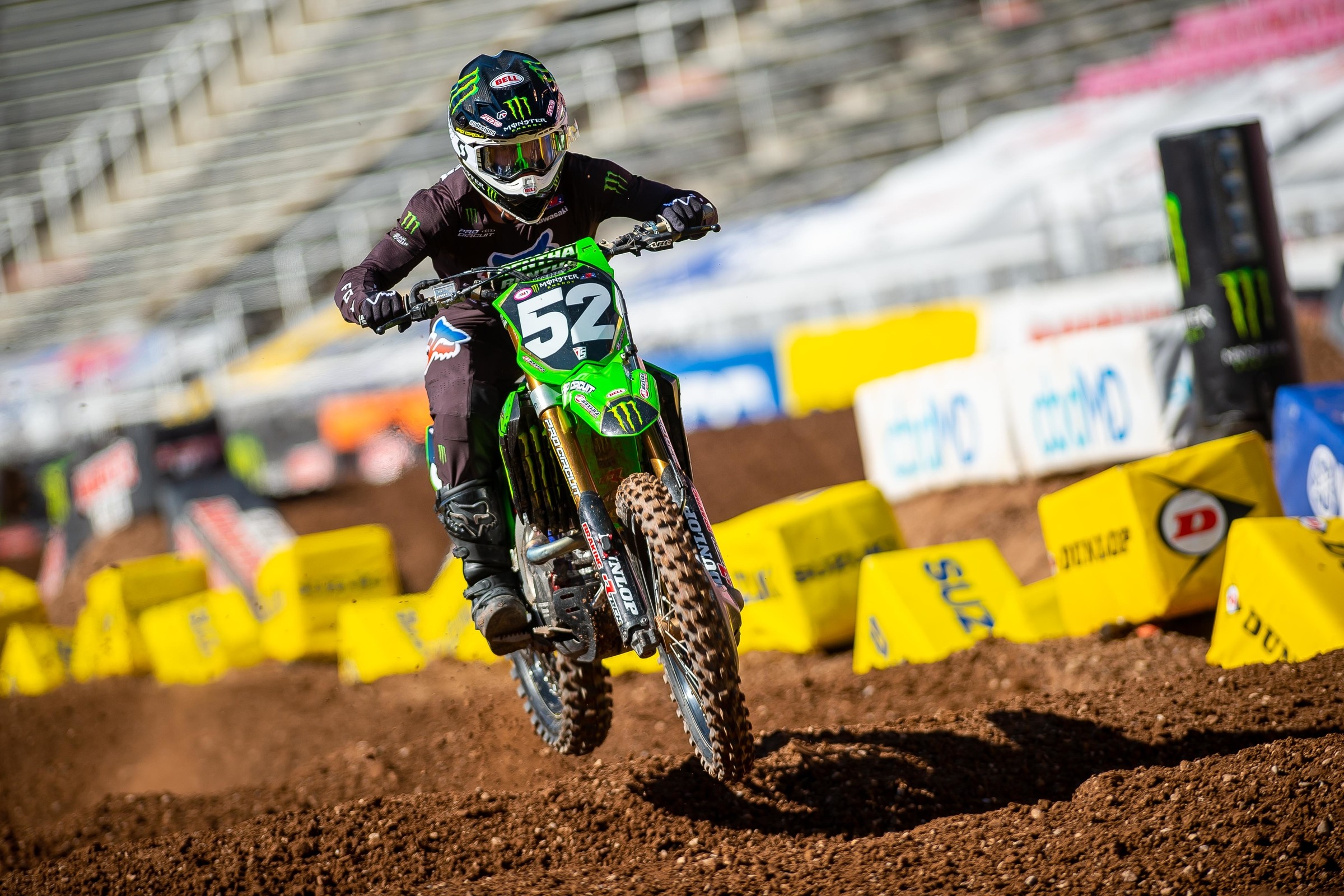 One Down, One to Go

Austin Forkner did more than just win the first 250SX West race in Utah on Wednesday—he also displaced Justin Cooper to move into second place in points. Now, with just two 250SX West races remaining, there’s just one more rider, Dylan Ferrandis, to get by if he wants to bring the championship home. But with a ten-point deficit and very little time left, that’s easier said than done. “I’m kind of in the position right now where I just have to win out,” said Forkner after the race. “Then that still might not be enough, depending on how Dylan finishes. There’s only two races left now, so I’m kind of do or die.” And even if Forkner does win on Sunday, he’d need a few riders to get between himself and Ferrandis. If that happens Forkner will head into the East/West Showdown at round 17 with a fighting chance of securing the 250SX West Championship. –Aaron Hansel

As mentioned above, Forkner is going to need a little help in the form of additional racers finishing ahead of Ferrandis. The most obvious source of two-wheeled assistance is Cameron Mcadoo, who was fantastic on Wednesday. The Monster Energy/Pro Circuit Kawasaki rider took third in Rice-Eccles Stadium, matching the best finish of his entire career. Symbolically, he even ran down and knocked down Ferrandis in his heat race. McAdoo is the determined sort, and he’s aiming even higher than getting second and helping his teammate, though. “I still feel like I want to win,” he said. “I was happy with third tonight. I haven’t podiumed this year. In four days I’ve got to get two more spots. So it was good.” Will McAdoo get between the contenders, or simply get the max himself? –Hansel

By nabbing 11th place on Wednesday Chad Reed recorded his best finish of the season. It’s not exactly the same magic we used to see from the popular racer, but then again, knocking on the door of a top ten is still pretty good, especially for a veteran, especially considering how deep the talent pool is right now! During practice, Reed mentioned that his main goal for his farewell tour was to meet the fans, and there aren’t any fans at these races! So, does that mean this is really the end? If it is, he’s going out with better results at the end of the year than at the start. With only three races left in the season, and possibly Reed’s lengthy career, let’s see just how high in the results the stubborn racer can climb before the end. –Hansel 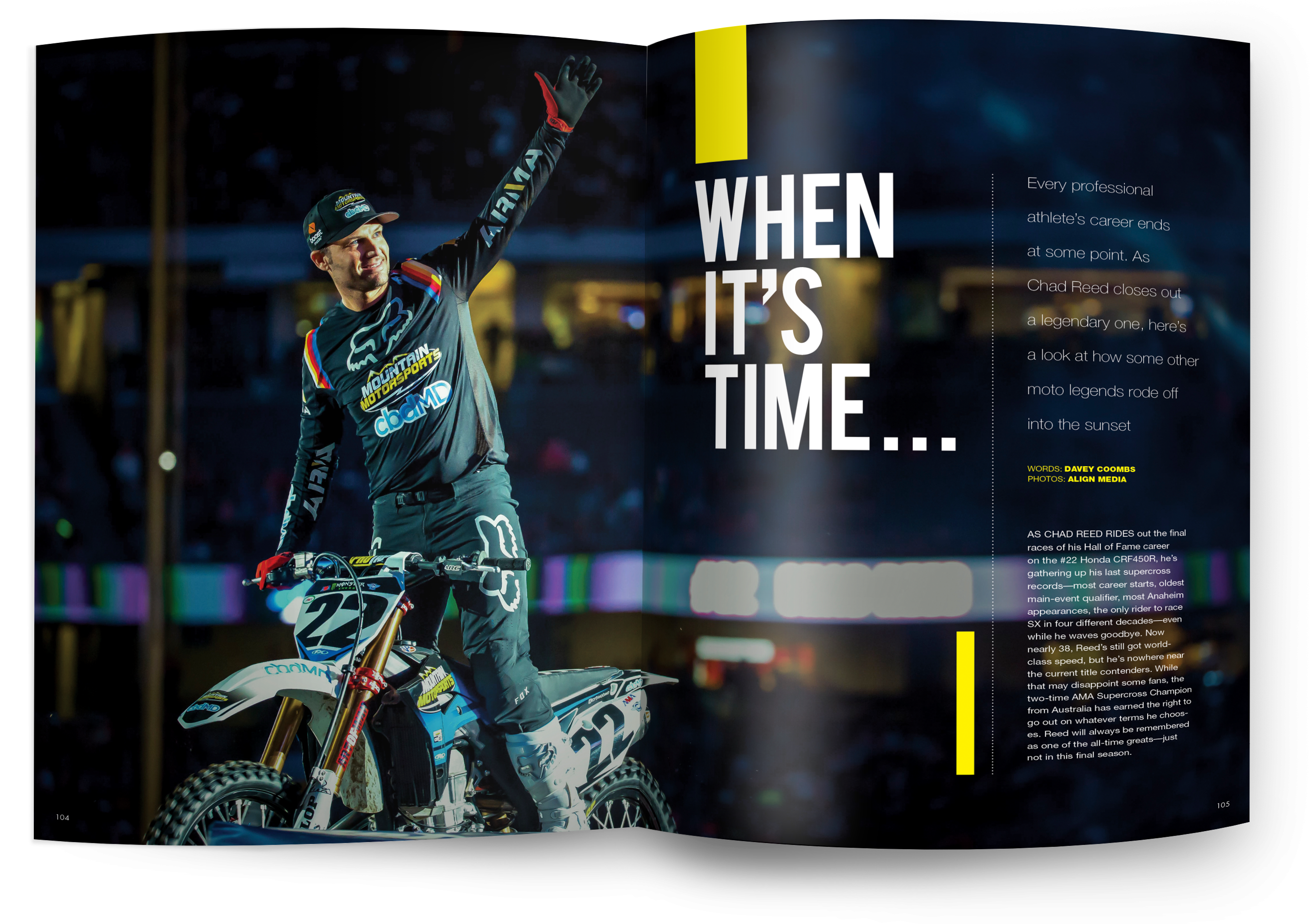 Sooner or later, every professional athlete’s career comes to an end, as we’re seeing with Chad Reed this supercross season. Here’s a look at how (and when) other moto legends rode off into the sunset.

A week ago, we speculated in this very column that Eli Tomac, with his semi-comfortable points cushion, might be tempted to put things on cruise control. We couldn’t have been more wrong. At the very next race Tomac and Cooper Webb put on the duel of a lifetime on an extremely treacherous racetrack. At the race after that, Tomac charged through the pack to take third after a horrible start and avoided a sizable points loss. With a 27-point lead Tomac can afford to give up a few points here and there, but that sure doesn’t seem like it’s been his mindset lately. Now he just has to match the surging Webb over the next two races and he can clinch. Will he keep it pinned on Sunday and get one step closer to wrapping this thing up a race early? –Aaron Hansel

Justin Barcia was having quite a season in 2020 before racing temporarily halted, but since the wheels started turning again in Utah it seems Barcia has been having a hard time keeping them on. We mean that literally and figuratively. The Monster Energy Yamaha rider crashed on Wednesday and was unable to rejoin the race thanks to major damage to his front wheel. Before Utah Barcia’s average finish was 4.3, but his average finish in Utah has been 11.5. That’s a significant drop! “I was having a pretty good day, better than it has been,” said Barcia in a team statement. “I got a little sideways in the whoops and then it just kicked out too crazy and the bike went flying. I dinged myself up a little, but I’m alright and will be back on Sunday. Unfortunately my bike was broken after the crash and I wasn’t able to finish the race. So that was unfortunate, but will definitely get them on Sunday.” You know Barcia wants to finish strong, and you know he wants to get fourth place back from Jason Anderson. We’ll see if he can rebound on Sunday. -Hansel

Both Eli Tomac and Dylan Ferrandis have the common unfortunate task of recovering from bad starts. Through four rounds in Salt Lake City, Tomac has had exactly two good starts and two bad starts in the main events. Ferrandis, again, spent most of the first 250SX West main event back slicing through the field after a mid-pack start. The jump off the gate may be troubling both, but it could be most troublesome for Ferrandis who would do himself a huge favor to put more points between himself and Forkner going into the showdown. After race, Dylan mentioned that his start was good this time, but his bad gate pick—courtesy of getting knocked down by McAdoo in his heat race—was his biggest problem. Look for starts to be a bigger premium coming down the stretch here. -Kellen Brauer

Zach Osborne has put together an incredibly successful campaign in Salt Lake City thus far with two podiums, four-straight top fives, and he just matched his career best second-place finish on Wednesday. After leading 20 laps of the main event a week ago, the Rockstar Energy Husqvarna rider fell to the clutches of Cooper Webb and Eli Tomac late. However, he was still just coming back from a fairly large injury that initially pulled him out of the season back in March, and now he seems to have his feet planted back on the ground again. Could he sneak in his first career 450SX class win down the stretch? -Brauer

The lengthy time off seemed to have some lingering effects for some of the 250SX West riders as there was a lot of high-intensity pass attempts and untimely crashes. “Everyone was so hyped after watching those east coast rounds, and you could see it in evryone’s riding style and aggression,” said Christian Craig, who inherited a heat race win thanks to all the carnage. In what was nearly a full second offseason for them all, the first race back was like racing Anaheim 1 with the championship on the line. Now that one race is in the books for them and the cobwebs are dusted off, look for a bit smoother sailing this Sunday. -Brauer

We have had four very different weather environments for each race in Salt Lake City thus far and as such, the dirt has been getting hammered. From hard and dry conditions, to the wet and rainy third round, and now back to hard packed dry dirt. This Sunday’s race looks to be no different from Wednesday as the start time is the exact same and the sun has done nothing but beat down on the soil since the rain last weekend. Track crews will work tirelessly to keep moisture in the soil once the rebuild is complete, but still look for slick conditions to arise once again. -Brauer

Sunday’s race will mark just eight days of the 2020 Monster Energy AMA Supercross season remaining and many riders will be looking to end on a high. Outside of the championship fights, close battles remain throughout the field, such as only 26 points between sixth place Malcolm Stewart and 11th place Aaron Plessinger in the 450SX class. The 250SX West class features just nine points between seventh-place man Luke Clout and his teammate Mitchell Oldenburg in 10th. Championship bonus structure varies from contract to contract, but you can bet most of these riders still in close fights would much rather finish a few spots higher than they already are. -Brauer