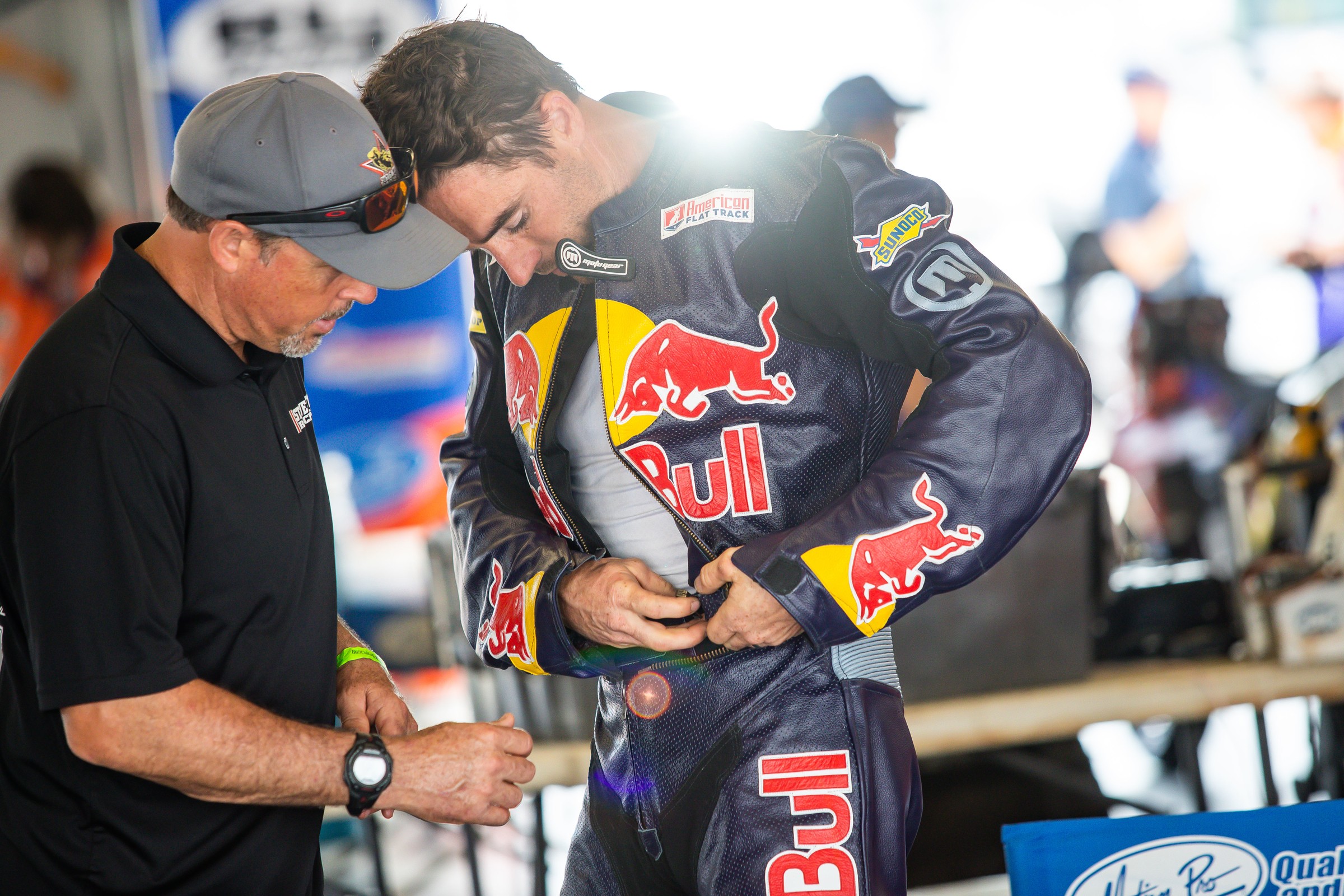 “Yeah before we even did Moto Fite Klub, Rob [Buydos, who ran the event] is like, ‘“You know Flattrack Fite Klub is coming?”’ says Ryan Sipes. “Lo and behold two days later he calls me with Jared Mees and all these guys on the phone. And we’re doing it!”

Yup, Moto Fite Klub, that crazy race from an undisclosed location starring Travis Pastrana, Ryan Villopto, Kevin Windham, (Sipes himself), and more, was a hit. Rob Buydos whipped the event together in about 12 days, and ran it on May 12, all in a haste to get it done before supercross or motocross kicked back to life. Well, now Monster Energy AMA Supercross is back, and the industry is fixated on it twice a week. The Moto Fite Klub vibe was cool while it lasted, though.

American Flat Track, though, is not back. The series is scheduled to resume on July 17th in Florida. So that means flat track fans are as starved for racing now as supercross fans were one month ago. Enter Flattrack Fite Klub.

The event will run tomorrow night, and you can watch it on Fite.TV. Like Moto Fite Klub, it features a weirdo format. You’ve got eight total riders, four retired legends (Jay Springsteen, Chris Carr, Scotty Parker, and Joe Kopp) three current stars (Jared Mees, Bryan Smith, and Sammy Halbert), and Sipes, who will basically race anything, anywhere (and has won a couple of American Flat Track TT races).

“Nineteen-eighty-three was kind of the last year of two-stroke 250s in pro flat track racing,” says Carr, the seven-time AMA Grand National Flat Track Champion. “They were the junior bikes for guys coming up. I’m 53, so I was kind of the last kind of guy to race a two-stroke. If we were on a big half mile tracks on modern Indian FTRs, the older guys wouldn’t have a chance. But on a quarter mile dirt oval, on ‘70s era bikes, I think we’re in for some surprises, and I hope that I’m one of those!”

Flat track can skew a bit older, anyway, as a guy like Springsteen, the three-time AMA Grand National Champ who seemed to race competitive forever, can prove. Carr believes that an older rider can hang with a younger rider in speed.

“Week in week out, battling for a championship, no,” says Carr. “The older guys in this group could probably run with a guy like Jared Mees for a heat race, though. We’re in a shape, but not the right shape or the best shape! But this format allows you to be fairly competitive. I kind of liken this this event to short attention span theater. Three laps in one round, four laps in the next and five in the final. Should be a short program and a heck of a lot of fun, and I know from all my years of experience, when racers are having fun, it’s very entertaining, and that’s the goal.”

“I would say there are some rivalries that are still there from a previous era,” says Carr. “We came from the same time in motocross, when it was guys like Ricky Johnson and Jeff Ward, Johnny O’Mara, and David Bailey. You know how hard those guys worked. Same here, there’s nothing I want more than to beat those guys I used to race against! How are our skill sets now? Who knows? I haven’t raced against Parker in 20 years. I did ride against Springsteen about five years ago, and he was hauling ass. So I know these guys are gonna go for it.”

All the way on the other end of the scale comes Sipes, who has once again entered a race having no idea how he will do, or if he even belongs amongst the elite. “That’s the first thing I said!” Sipes explains. “I said ‘“Rob, people are going to be pissed off that I’m in! You’ve got legends and current stars and then me!”’

Sipes, though, has earned respect industry-wide for his ability to run the pace on anything. But he admits an oval race is much different than a TT, which he has already won.

“It’s an oval, so I don’t have the right hander and the jump in my favor like a TT,” says Sipes. “I did a half mile oval a few weeks ago and it did not go well! And these 1970s Bultacos, Carr and Parker and those guys got used to them, so they’ll probably smoke us. I’m not sure.

“I’ve done a little bit of flat track on an oval, I’m working on it,” says Sipes. “I can fake my way through a TT with moto skill, but on an oval that does nothing for me. It’s all backwards, everything you learned on a moto track, it’s all different.”

“Where do I sit on a moto bike in a corner?” says Sipes. “The front, because you steer with the front wheel. JD Beach, Johnny Lewis and all these flat track guys are like ‘You’ve gotta scoot back.’ You know how we have bump seats in moto so you don’t get too far back? They put a bump on the front of the seat so I didn’t get too far forward!”

You can watch tomorrow night. The only thing certain is that flat track fans, still waiting for regular action to return, are going to be pumped.