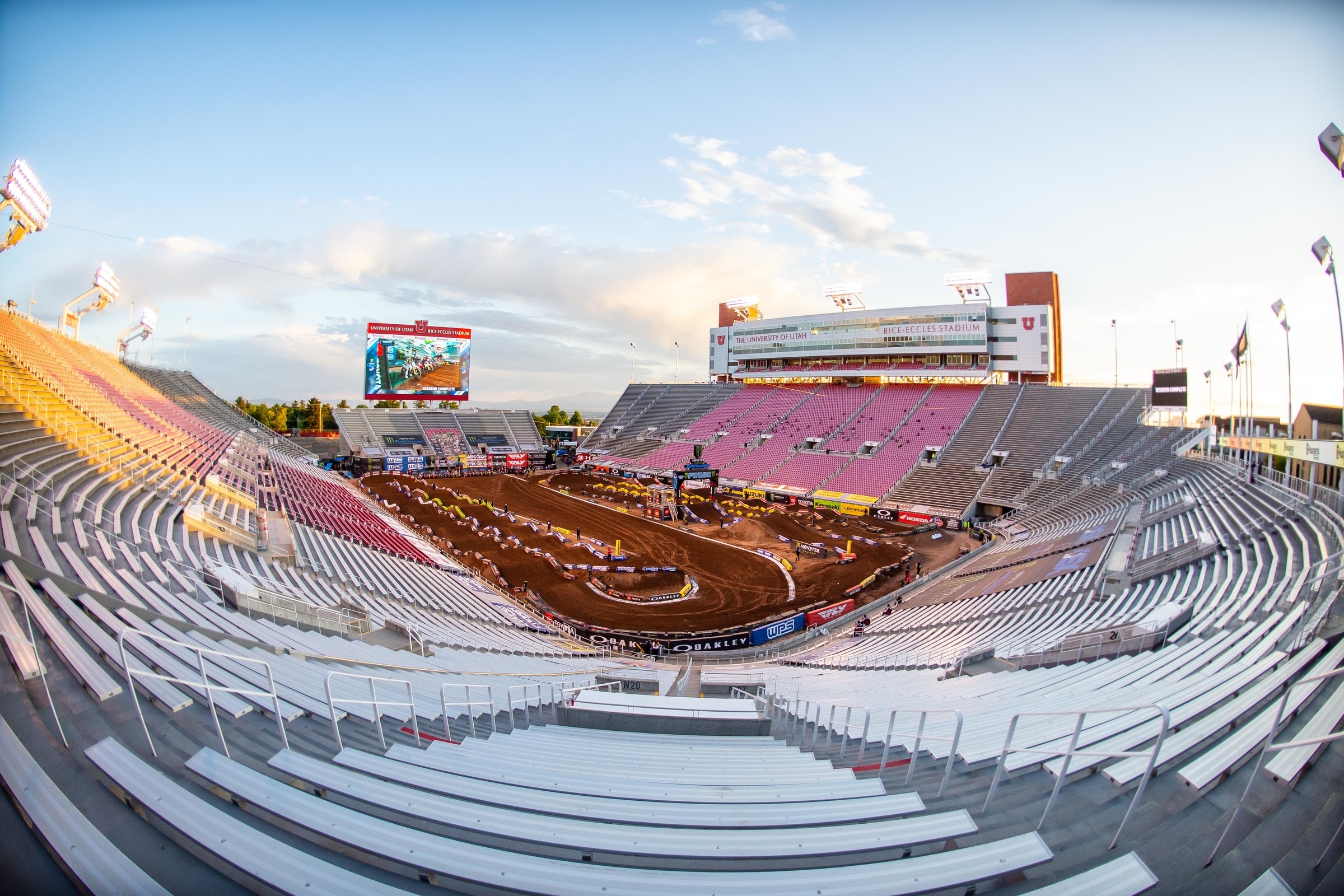 We didn’t have any racing for a long time but now, NOW we have so much racing we don’t know what to do with it! Just two days after round 11 of the Monster Energy AMA Supercross, we’ve got round 12. I mean, did you hear that this was the first ever supercross on a Wednesday? I think I did, a time or two.

The track was a million times better than it was on Sunday, partly due to the temperature outside, partly due to racing at night, party due to design and also I’m sure the track crew also learned a little bit from the first race to the second. The long whoop section was tough for sure and lots of guys had problems there. The whoops were the most challenging part of the track and guys could make or lose a couple seconds a lap there. There was also an obstacle that only the elite guys could do and if you’ve been a reader of this column over the years, then you know I love that stuff.

Let’s touch on some uppers and downers from Wednesday’s race, yeah?

Webb and ET3: Well Cooper Webb and Eli Tomac were really the winners from Wednesday’s race, right? Webb ACTUALLY won the race but Tomac, man, he was buried off the start and came up to challenge Webb for the lead when the checkers flew. So, yeah both of those guys have got to be stoked with the race. Tomac has passed Ken Roczen, his main title rival, twice in two mains and he’s been even with Webb on points with the number of aces winding down. Both riders have to be very happy with their race and through two rounds, they’ve been awesome.

Osborne:Zach Osborne is a winner also. Yes, he got third but he led 20 laps of the damn thing before getting sucked up by ET and Webb. It was the best performance in Zach’s 450 career and he came so close to winning the thing, he’s got to be stoked.

Mookie Fever:Malcolm Stewart was awesome. He won his first ever 450SX heat, he was amazing in the whoops most times and when he fell in the first lap, it was like “Awww man, there goes a good result for Mookie”…except he got up and on a tricky track, raced all the way to seventh! He was on fire and it was a great ride. Nice work for the two-seven.

Monster Energy/Star Racing Yamahas: Yes, the riders on top of them, Shane McElrath and Colt Nichols, have been very good through the first two rounds but the bikes, yeah they’re ridiculous. They have the best motors in the class and we know this but it’s not a coincidence that at these altitude races, with an even bigger emphasis on power, that they’ve been killing the starts and consistently doing all the big rhythms. Watch the start of the 250SX main from the last race, Chase Sexton gets a great jump and just gets sucked up. The Yamahas were the only guys to get the triple onto the table in the main event and those bikes look amazing.

McElrath: Okay, fine I’ll put Shane McElrath on the Uppers list because he’s two for two and now has a share of the points lead. Also, McElrath officially pointed out so he’ll be 450SX next year, win or lose. He’s been about flawless in Utah outside of going off the track once after the finish. He’s also won four-straight races in this stadium, dating back a few years. What a couple of rides.

Husqvarnas: We talked about Osborne and his ride but what the entire Rockstar Energy Husqvarna team? Dean Wilson, Jason Anderson, and Osborne were 1-2-3, respectively, in one practice and in both races here they’ve all been bouncing around the leaderboards. Whatever the guys did on the break looks like it’s been working, Osborne’s gone 5-3, Anderson 4-4 and Wilson (10-6) has perhaps been the fastest guy with the worst results through the first two rounds.

Altitude: Yeah, that’s right—I’m putting the altitude on my list as an upper because it’s literally is an upper and right now, it’s kicking a lot of guys asses. Tyler Bowers, Vince Friese, and Ryan Breece are just a few of the riders that are getting their butts kicked by the altitude here in SLC. And trust me, lots of riders look to be pretty tired. This hasn’t been all sunshine and rainbows for the guys racing up here.

Roczen (first half of main): Well, Ken Roczen came around the first turn on the inside and got pinched off so he was buried a bit off the start. From there Roczen absolutely started putting down some serious heaters. He passed Tomac and was working his way up. His whoops speed was phenomenal and coming off a dominating heat win, it looked to be his night. But then…

Roczen (second half of main): …He looked like he hit the wall in the second half of the main event. Fifth place for Roczen wasn’t good and like I said, I think he and some other guys were really feeling the short time between races. The magic was there for about ten minutes, though!

Sexton's lead: Chase Sexton’s somewhat comfy ten point lead has gone poof after two races but here’s the thing, he’s been good! He rode right behind McElrath in the first race and in this one, he crashed early on and rode amazing to rip through the pack. He could only get up to fourth but it was a hell of a ride. It’s just that Shane, and his Yamaha, has been better. I know the GEICO Honda is improved over last year but it’s still not the bike the Yamaha is (motor wise) at elevation.

Reed and AP:Chad Reed and Aaron Plessinger probably both want to hit the reset button here after two races. Plessinger hasn’t gotten anywhere near the starts he needs to and Reed’s had bike issues and then didn’t look as frisky as he had earlier in the day in the main event. Both guys have got to be frustrated.

AC: Adam Cianciarulo crashed out of Sunday’s race and told me he was 60/40 to race on Wednesday. You could see in the first practice he was laboring out there and really never put in a fast lap. So he didn’t race, but I hear he’s going to try again on Sunday. Bummer, bro.

That’s a wrap on Wednesday nights race, more to come from here in SLC, stay tuned for round three of the SLC SX series coming up! They just keep coming! Email me at matthes@racerxonline.com if you want to chat about this column or whatever else.