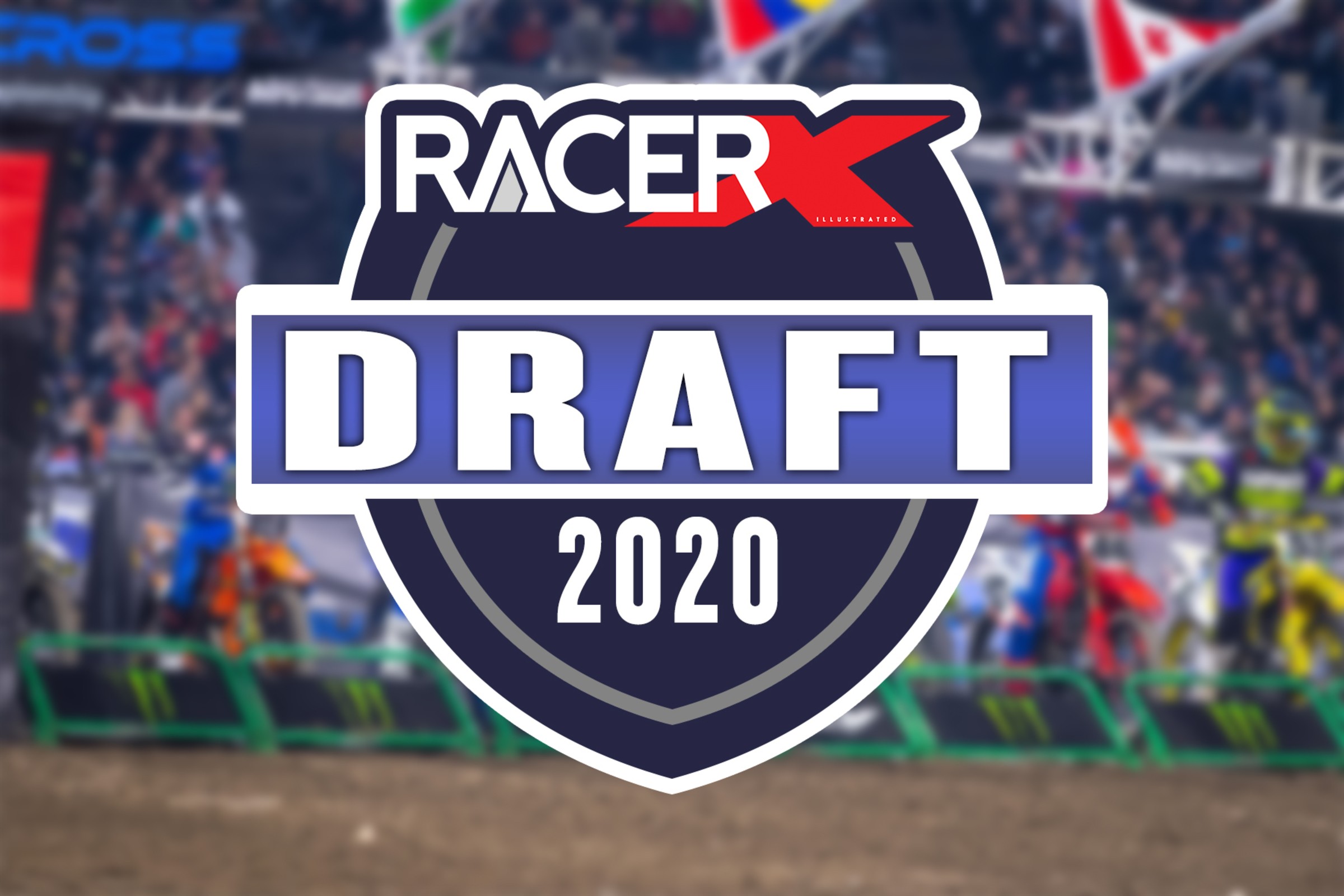 If you missed our picks in the first round, make sure to check them out before reading this post.

With the seventh selection in the 2020 Draft, Chase Stallo selects… Justin Cooper!

Justification: He's fast. And will probably win some 250 titles. So, with Roczen winning 450 titles, and Cooper winning 250 titles, MY team will be the best.

With the eighth pick of the draft I’ll go somewhat off the board and pick Aaron Plessinger, he’s a two-time 250 champion and got better every single year in that class until winning. So, yeah, it’s been rough to start his 450 career but he’s been good this year, not great, and I think he’ll follow a similar path in the 450s. Is he going to dominate the class? Probably not, but for the next five years he will be solid I would bet. I was going to go [Jason] Anderson, but I think he won’t make it much longer before he hangs it up, [Dean] Wilson and [Zach] Osborne—same deal. So yeah, give me AP and I have a solid “triple” that I love.

I have my "now" lock already, banking Cooper Webb in the first round. For my second pick, I will look to the future. Austin Forkner has the potential to win for years to come. His raw speed and knack for getting out front will serve him well as he ages. I expect to see Forkner alongside Adam Cianciarulo on Monster Kawi before too long, with Tomac taking his millions back to Colorado. Forkner is poised to win 250 titles now and contend for 450 titles down the line in our five-year forecast. Forkner, the steal of the draft thus far.

Steve is about to lose it. Sorry, it has to be done.

With the 10th pick of the 2020 Racer X Draft, Kellen Brauer selects…Jorge Prado!

Comment: Is it a leap to assume someone with no supercross background might do well here? Maybe, but if he gives me top 10 indoors, I have a pretty locked in title contender outdoors for the next five years. As a current 450 rookie, he is unproven, but he's already raced all of these guys and doesn't look intimidated. When he led 20 minutes of the first 2018 Monster Energy FIM Motocross of Nations moto at RedBud on a 250, he wasn't just beating Jeffrey Herlings and Gautier Paulin most of the race, and he didn't just beat Jeremy Seewer and Jeremy Van Horebeek in the second moto... At no point was he ever behind Eli Tomac, Ken Roczen, Justin Barcia, Aaron Plessinger, Dylan Ferrandis, etc. on a track he'd never been to! Putting aside the fact he already tested for a month in California with the Troy Lee Designs/Red Bull KTM team back in the 2015 offseason where he was lauded for his supercross skills in a short period of time, the kid is great at adapting. For the most part, he's been good about avoiding the injury bug (he broke his femur this off season but he came back quickly, and that’s about it for his big injury list) and he's astoundingly even younger than my first-round pick at just 19-years-old. If this hypothetical draft allows us to have GP guys come to the U.S., I'd love to see what Prado could accomplish here.

Just as Steve said, we all knew it was bound to happen that Kellen grabs the first European/MXGP rider in this draft. That’s cool. I’ll go with a non-American, new star myself…

Comment: It’s Jett freakin’ Lawrence. This dude is a stud both on and off the track. He’s all healed up from his broken collarbone and he’s bound to put in more rides like he did at the Anaheim 2 Supercross (minus everything after he entered that final whoop section). He’s a good citizen, unsticking people from the mud at the local track, he’s making his own clothing brand. Like Ferrandis, he’s got a good team behind him and he’s SO FAST. Plus, he’s gonna be fast in the Lucas Oil AMA Pro Motocross Championship as well. Oh, and if we’re playing the age game, well this cat is only 16 years old. With Ferrandis and Jettson, Team Kendra is looking good both now AND five years down the road when between these two we could easily have numerous championships.

Also, the Lawrence brothers are a package deal in this draft, just as they are in real life, right? So, without even using another pick I get Hunter also, yeah? Awesome, thanks!

Weege is back on the clock…

I hate you guys! I was this close to my master plan of getting a 450 stud and a 250 next-gen star and then you ripped it away from my hands at the last moment. Jett Law coulda’ shoulda’ been mine! Bastards. Fine, if you’re all going to pick young stars in this round, let me beat you in the complete opposite fashion. My selection for round two is ageless. Don’t put a clock on him unless it’s on the racetrack. His age isn’t an issue.

With the 12th in the 2020 Racer X Draft, Jason Weigandt selects…Zach Osborne!

Yeah, Zacho is maybe 30 or 40, I’m not sure. He’s been around forever. The early years don’t matter, though, he’s only found his stride recently, and we’ve seen what Zacho 2.0 (or 3.0 or whatever) can do. He dominated 250 racing in 2017 and 2018. He was knocking on the door of 450 motocross wins last year as a rookie and was just barely off the mark in supercross this year. It’s coming. Year three is usually where 450 riders really figure it out, and that will be Zach in 2021. Okay, he’ll be 30-some by then, but Zach is in a completely different place than most riders his age, who are either hitting the downside or are worn out, mentally, from the pressure of having to win everything for the last ten years. Zach loves motorcycle racing more than anyone, so I could see him still going fast at age 35, just like another certain someone who is awesome, but I will save for another round.

Look, you guys can have your 250 stars. I remember Zach putting it to a lot of those guys just recently. By next year, he’ll be fully seasoned in the 450 class and ready to stack up wins. Sorry kids!

We’ll be back with round three soon!