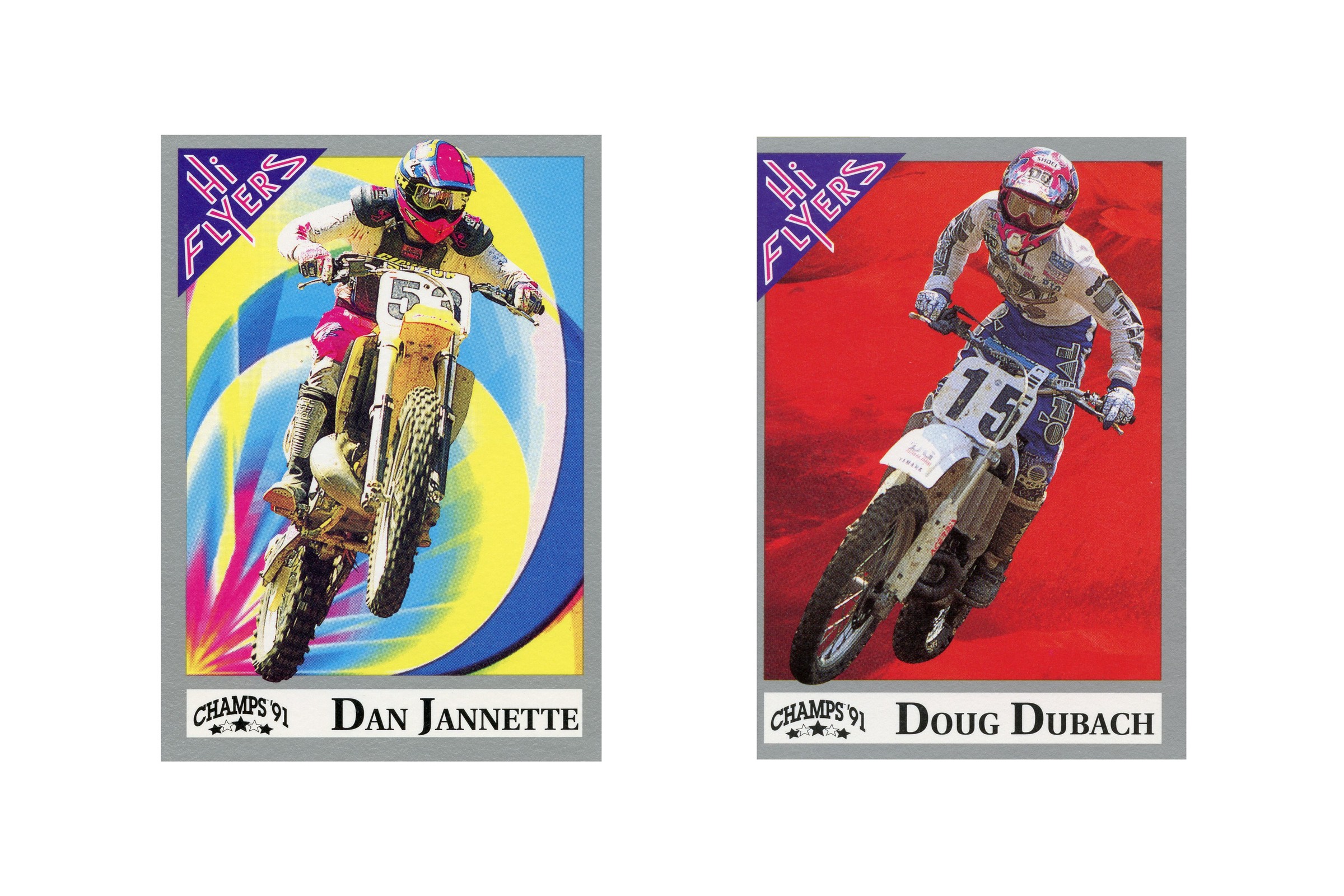 Yeah, we’re all on lockdown right now as the supercross season pauses, and we all try to think about what’s next. I don’t know much other than I’d like to read and listen to things that don’t have something to do with the word “pandemic” in it so why not try to walk down memory lane?

I’m going to take a look at the 1991 edition of the Hi Flyers cards that came out and dive into the backstory of the card, how it ties in with myself, we’ll try to talk to the rider in the card if we can and all in all, look back at a time in the sport when things were simpler.

Ready? Okay, here we go with the first two!

Jannette was a member of the Michigan Mafia and was a working mans privateer with a short pro career. Dan also gotfourth overall at a national. Yes, it was the one-moto complete mud fest that was 1991 Hangtown, but who cares? Dan got fourth there and if that were me, I’d bring those results around in my wallet forever. As I said, Dan didn’t race pro for that long, but he also got 13th at Hangtown the next year which is also way legit. He got his first main event points at Pontiac and his last ever pro points were scored at RedBud. That’s symmetry for a Michigan man, yeah?

Matthes Tie-In: Well, the guy that I hired to help me with PulpMX podcasts and the site ten years ago and is still with me today is named Kevin Husted and he’s a personal friend of Dan’s. BOOM.

Weirdest Thing About This Card: Well, Dan’s wearing Clover gear which means they had to have paid him because no one would wear that for free. That’s a Fox chest pro he’s wearing with Clover stickers on it as well. He’s also got the old school Hi-Point boots on. Props to Dan for what looks like a sick paint job on the helmet.

I asked Dan about his card: “The Hi Flyer cards were a fun addition to racing at that time. There wasn’t any social media and it was a way for us to show people what we did. Nineteen ninety one had the highest points in my pro career starting with a trip to Japan for a supercross race, then a decent finish at Gatorback, and a career best fourth at the muddy Hangtown in the 250 class. Two weeks later I broke my wrist in the St. Pete Supercross.  But overall, a fun time traveling around the country in box van’s racing motorcycles.”

First of all, the Doctor is a legend. From 1984 to 2001, he scored points either indoors or out. He rode Yamahas from 1985 until, well, he’s still riding Yamahas. Whether they’re yellow, white or blue, he’s truly a Blu Cru member. He won a 250SX, he won a Canadian national title and has something like 843 top tens in 125, 250, and 500MX and 250SX. He’s worn O’Neal, Scott, and Shoei the entire time as well. It’s amazing. And he’s still at the races helping out Japanese riders while running DRD Racing. Doug Dubach is motocross.

Matthes Tie-In: Well, besides him riding a Yamaha wearing #15, which I know a thing or two about, what I try to do with this segment is tie it into me knowing the rider and what I got is that Dubach and I are friends. How cool is that? I’ve done a bunch of podcasts with Doug, he’s awesome every single time. Check out the first podcast I did with Doug.

Weirdest Thing About This Card: He’s running DG handlebars which were barely made and O’Neal boots which weren’t very good…like, ever. So, I guarantee you he’s the only guy in 1991 with that combo. Also, as Doug states below, he was a privateer this year but then went to factory Yamaha and even if my life depended on it, I could never name the years Doug was factory or not. It just always seemed he was from 1986 on, right?

I asked Doug about this card: “This was an up and down year for me. I was back to being a privateer following a year of injuries in 1990. I had won several of the European supercross races and was coming into 1991 with a vengeance to prove my worth. Unfortunately, a couple races in [San Diego Supercross] I hurt my knee and was out for the next ten races. I returned to Oklahoma Supercross to get tenth and then won San Jose the following weekend. I went on to have some mixed results in the outdoors, however securing me a spot back on the factory team in ‘92.”