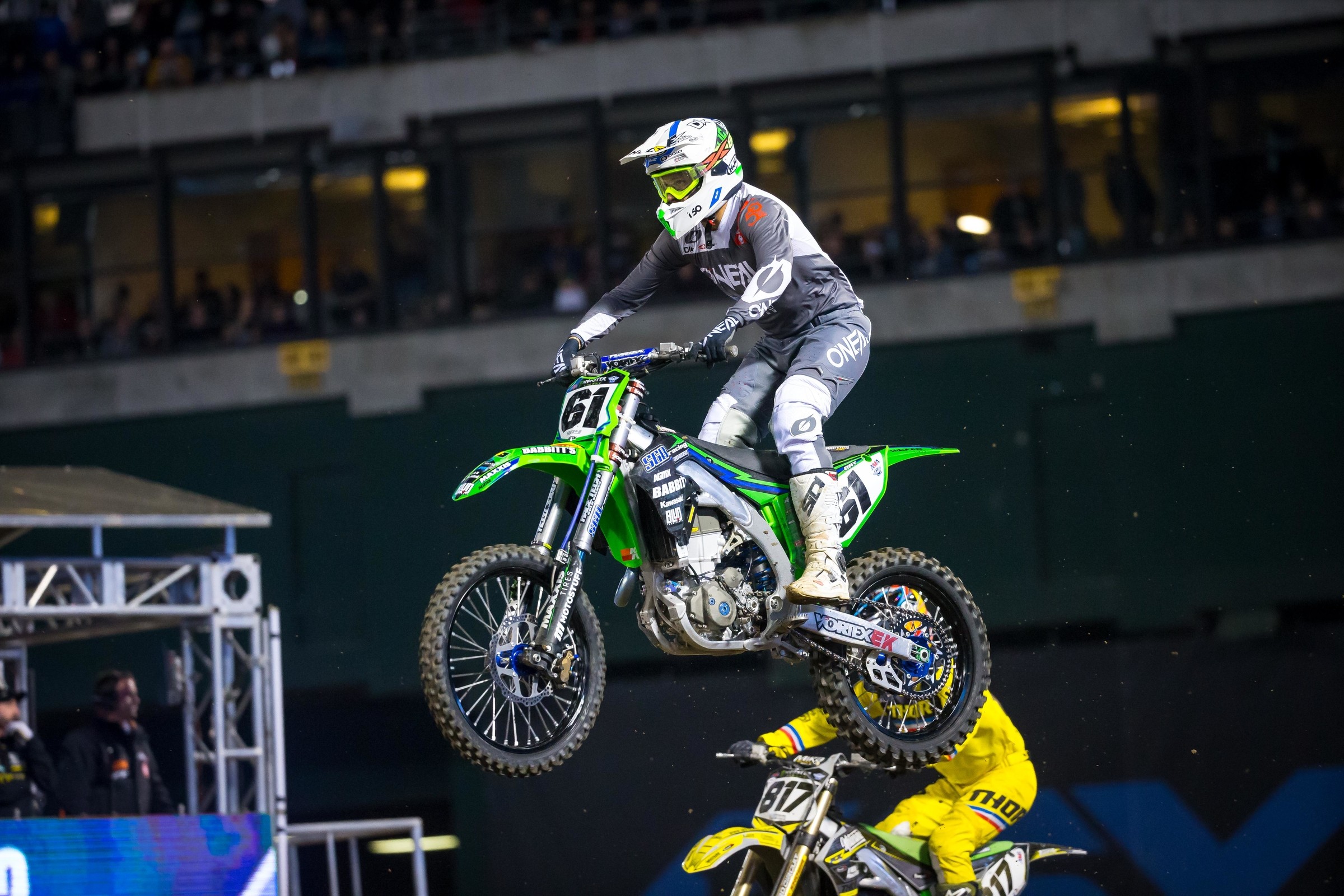 Life is tough in the 450SX class early in the season, as the field is absolutely loaded with championship-proven riders on factory equipment. That doesn’t leave much room to sneak into main events, and so it’s often the veterans of the qualifying game that sneak it in.

Even so, just running that gauntlet is not for the faint of heart. Alex Ray has had some heart-stopping moments just to qualify this year, including a last-lap pass for the final transfer spot in the 450SX LCQ in Oakland.

Meanwhile, Kyle Cunningham has missed some mains through LCQ warfare (example: he got knocked down by Josh Cartwright while battling in the LCQ last weekend at Glendale) and was relieved to sneak it through the heat race this time. For these guys, just making the main becomes an emotional roller coaster—then it’s on to the main events, where they want more.

Aaron Hansel caught up to both riders after Oakland.

Alex Ray: I made it hard on myself. I qualified good, like 17th. I had a pretty good last practice. Coming into the heat race getting a top nine seemed accomplishable I got a great start and was up there with the guys and snuck around the inside. But then I just made a bonehead move trying to be too aggressive. I clipped the back wheel of [Ryan] Breece there and made it hard on myself. I came from way back to tenth, almost passed into ninth on the last lap. But I had to go to the LCQ again man, and got a last place start. But 14th to fourth, made a last lap pass on that French Guy, [Jason] Clermont, for fourth. So I had a few extra laps with the LCQ, but I feel like I stayed warm and I felt racy in the main event. I capitalized in the HEP Suzuki boys making a mistake in that rhythm. Not the same lap, and I don’t know what they did, but they went off the track there and I just clicked off my laps there and felt pretty good.

Racer X: In that LCQ, I was just waiting and waiting for you to punt someone but you didn’t. Was that even on your mind?
No, no. The faster I can get around someone and the quicker I can break away, that’s pretty much my mentality. I don’t want to do something stupid to where I crash as well. Yeah, it’s probably great for the fans and people watching, but I just want to make the pass and get the hell out of there.

What were you thinking when you came into the first turn in that LCQ in last?
“This is going to be a tough one.”

But you kept on going!
Yeah, well in the LCQ you’ve got pinballs going every which way. It’s just important to get through the first few laps and weasel your way through there a little bit. If you stay consistent you’ll make passes and it’ll work itself out. With a couple to go I was in fifth, but I didn’t really know where I was at. I looked at the board that last lap and it was like, “Oh crap, I gotta go!” I got close to him and yeah, just sort of squared him up and cut him off a little bit on that start straight to make sure I got the pass.

This track has gotten pretty nasty in years past and deteriorates fast. How was it tonight?
It definitely wasn’t as bad. They mentioned that they sifted the dirt and got all the rocks out. I think it made for a better track.  That rhythm before the finish, after the start straight, that was the worst spot to be honest. The three-three-two into that turn, that was the only soft, Oakland-ish spot on the track. Everywhere else was actually quite nice. The turns rutted up pretty good, but I feel like it didn’t get quite as bad as years past.

Kyle Cunningham: The night wasn’t bad, made it in out of the heat race and not having to go to the LCQ was obviously nice. We’ve been making changes the last few weeks and learning. I only spent the one year in 2018 on the Suzuki, and now we’re at a different place and have different suspension components with the Ohlins stuff. I feel like we’ve been learning as we go. But this week we made some good changes, the bike felt a lot better, and the heat race went better. No LCQ, which was a positive. In the main, in the beginning, I felt like I was riding pretty good, I was in that little freight train of people and I just made a mistake. I got on the edge of the track and hit a little bit of a sinkhole a couple of rhythms before the finish line and man, when I hit the wood floor, the bike just slipped out from underneath me like I was on ice. Minus the mistake there are a lot of positives to take. We were back in the main event, and just like any other year, as you race mains you get better and this was only our second one due to unfortunate mistakes at the others. Hey, we’ll take it! It was better than not being in there and it’s something to build off of. We’re in a better spot with settings. The track was pretty difficult and I think any rider here will agree. It was a tough one. Rutted but kind of slick at the same time. But my fitness feels good and everything feels good. Just have to keep working and keep moving forward and we’ll get better as the season progresses.

Racer X: How was the track?
When the track was fresh it started to tack up a little bit and by the main event tonight, I don’t know if it was the moisture in the air or what and it got a little bit on the slick side. It was fun track. The transitions were a little tighter, the ruts, you could tell the dirt was soft underneath so it still got rutted, but it made for some difficult racing. I felt good in the heat race, no LCQ again, which was a positive note. I just felt like in the main I didn’t get the greatest start, never really got going, then went down. Overall from the weekend the bike was better and we made some good changes. I felt more comfortable and now when I go home I think we’ll fine tune it and play with the clickers a little bit. We have a better setting, the motorcycle is good, and we’re going to keep getting better every weekend.