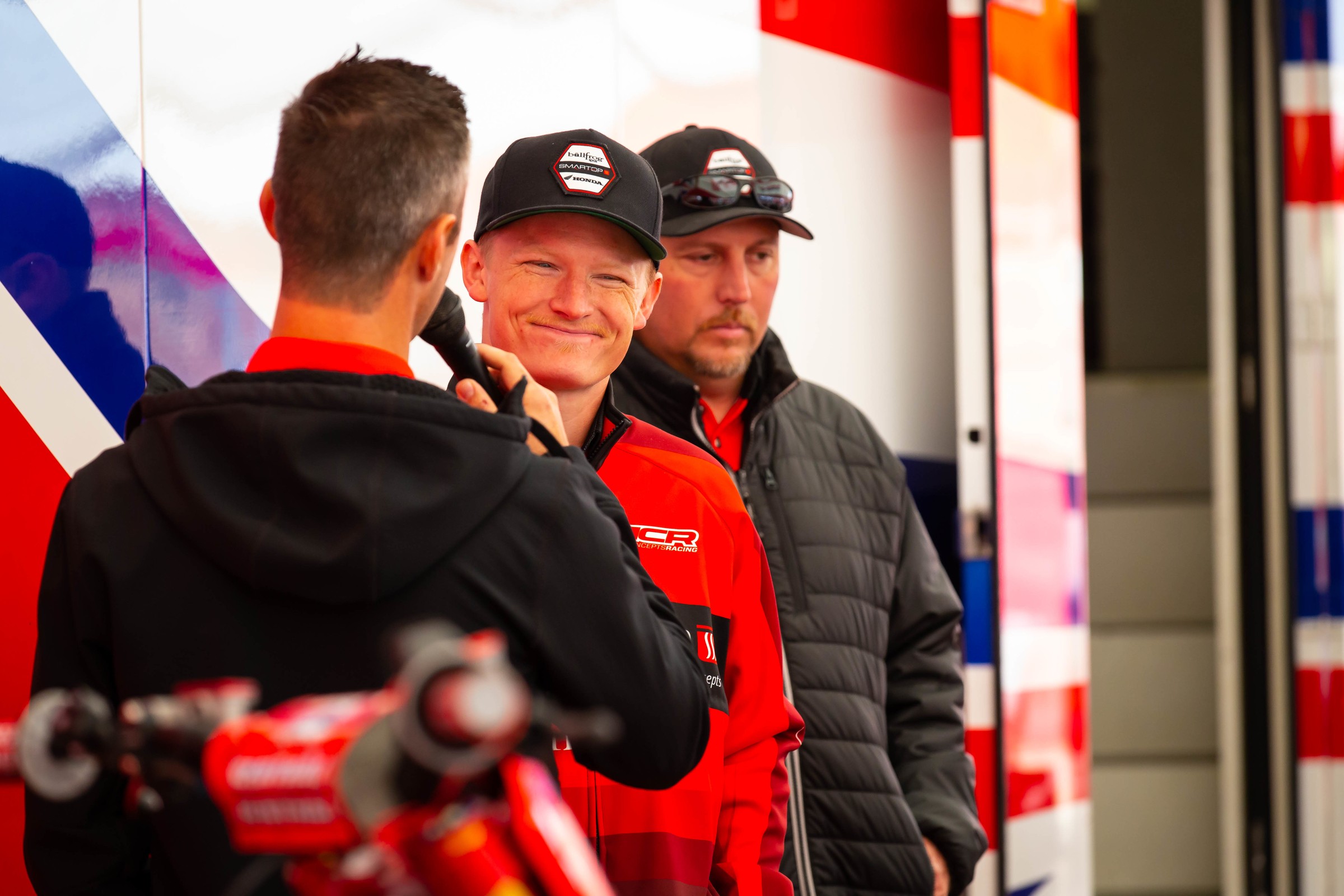 Not too long after, the 24-year-old mentioned to the guys at DMXS Radio that he had been struggling mentally throughout the year. He went to work with his brother and rebounded the following weekend at the Fox Raceway National for seventh overall. Hill finished 12th overall at the Thunder Valley National before suffering a shoulder injury the week leading into the High Point National that eventually ended his year early.

In mid-October, the SmarTop/Bullfrog Spas/MotoConcepts Honda team announced Hill would join the team for the 2020 supercross season. On Tuesday at the 2020 American Honda team presentations, our Aaron Hansel caught up with Hill to ask about how his new deal came together, his goals for 2020, and more.

Racer X: You’re on a new team. Walk us through how you talked to these guys and how all that came together?
Justin Hill: It pretty much came together when everything shook down between JB [Justin Brayton] and HRC and where everybody was going to end up. I just wanted to be on the Honda I rode. I wanted that bike. They worked out how it worked out. We just went along. I had some conversations with Tony early on. I called him quite a while ago, when I first had gotten hurt. I was like, “Hey, I’ll probably be out for the rest of the outdoors or whatever, so I’ll probably try to start figuring out my next move and everything.” So, I called Tony. At the time, they were full up. They had Malcolm, Vince, and they had JB. Then I proceeded to call Erik [Kehoe] and talk to him and try to get over to HRC and everything shook down. They went with JB and then a spot opened here for me. So it was painful in a way because it was like, how is this going to play out? And it was kind of stressful. But at the same time, my odds looked really good to be on the bike I wanted to be on. So, I landed here which has been way cool. It’s been awesome. The day in and day out has been cool. I love the bike. Tony’s a killer team manager. He’s been really, really good to me so far and he’s went above and beyond so far for me. I’m happy. I really am.

I’ve heard he’s really good at getting the rider what the rider needs and asks for.
Yeah. If we have issues, Tony’s on it. He’s passionate about this. It don’t have to be big for him to be concerned, which is cool. I think sometimes some places it’s got to be big for somebody to get their attention. If I call Tony and say, “Hey, what about this?” He’s like, “Yup, got it. I’ll work on it.” He’s that type of guy. He wants to do it and get down to the little details. I was down here in my RV just to train, and then ultimately I got myself into a better situation and just got an apartment out here. I’m like, “I need to park this boat somewhere.” He’s like, “Bring it up to the house. No problem.” Tony’s just helpful in more ways than this day-to-day stuff, so it’s been really cool.

Last year didn’t go great. Probably didn’t go as great as you were hoping it would. In retrospect, is there anything you can point to as to why or anything you can work on?
I don’t think it was too much with my approach. I think my approach just came early. I said quite a few times that I put so much elbow grease in October and November that by Christmas time I was tired. I don’t have that feeling right now. Right now I feel like I’m still building. I’ve never felt stronger for 20 minutes on the supercross track. So it’s going really well now in comparison. But my approach really isn’t that much different. I think it’s just bike setup. I’m not one to be searching for stuff. I feel like if something is going to work for me and I find it and I stick with it, I’m not a guy that constantly tries to  make my bike be a chameleon and do different stuff all the time, and change stuff all day long. I think this is fitting me better just as a base motorcycle. I get on it. I’ve tested two and a half days pretty much. I just kept saying, “Go stiffer, go stiffer,” until we’re not happy anymore. That never came. I’m like, well, we’re pretty dang stiff so maybe this is good. I’ve been running with it, and I haven’t wanted to change a single thing for a month and a half plus now. I think this is the bike. I’m just going to keep riding it until the season comes. I think it’s more bike setup right now. I’m really enjoying this chassis. These things have a lot of snap right off that little first degree of the throttle, so they’re really aggressive right away. That suits my style because I really don’t clutch the bike much. I don’t get it going, so I do really rely on power. So I think it has a lot to do with that. But probably more than anything as far as race result and what’s going to be different, is my mindset. For the first eight rounds of the supercross series, I had obviously high expectations for myself but not really a solid game plan to obtain what I thought I could do. That came later, and by the time I really feel like I got my feet under myself in my own head is when I got hurt.

Goals for 2020?
I think I’m a podium or win guy every time. If I do my thing right and I show up healthy, I think I’m a podium or win guy. I don’t think I’d be doing this if I didn’t believe that or have the capabilities to be doing that. It’s always the same for me. If I’m not up there getting those finishes then I’m not going to be that stoked, ever. This is a cool job and I like racing motorcycles and I like doing it, but dang. I don’t think there’s anybody out there that doesn’t want that. I think I have the capabilities to do it. Honestly me and Malcolm have been riding really good. We’ve been pushing each other, doing our motos together. I think we’re going pretty dang fast. I think the whole team is fast. I think we all have the capabilities to be on the podium. I don’t think anybody should be surprised if that happens.