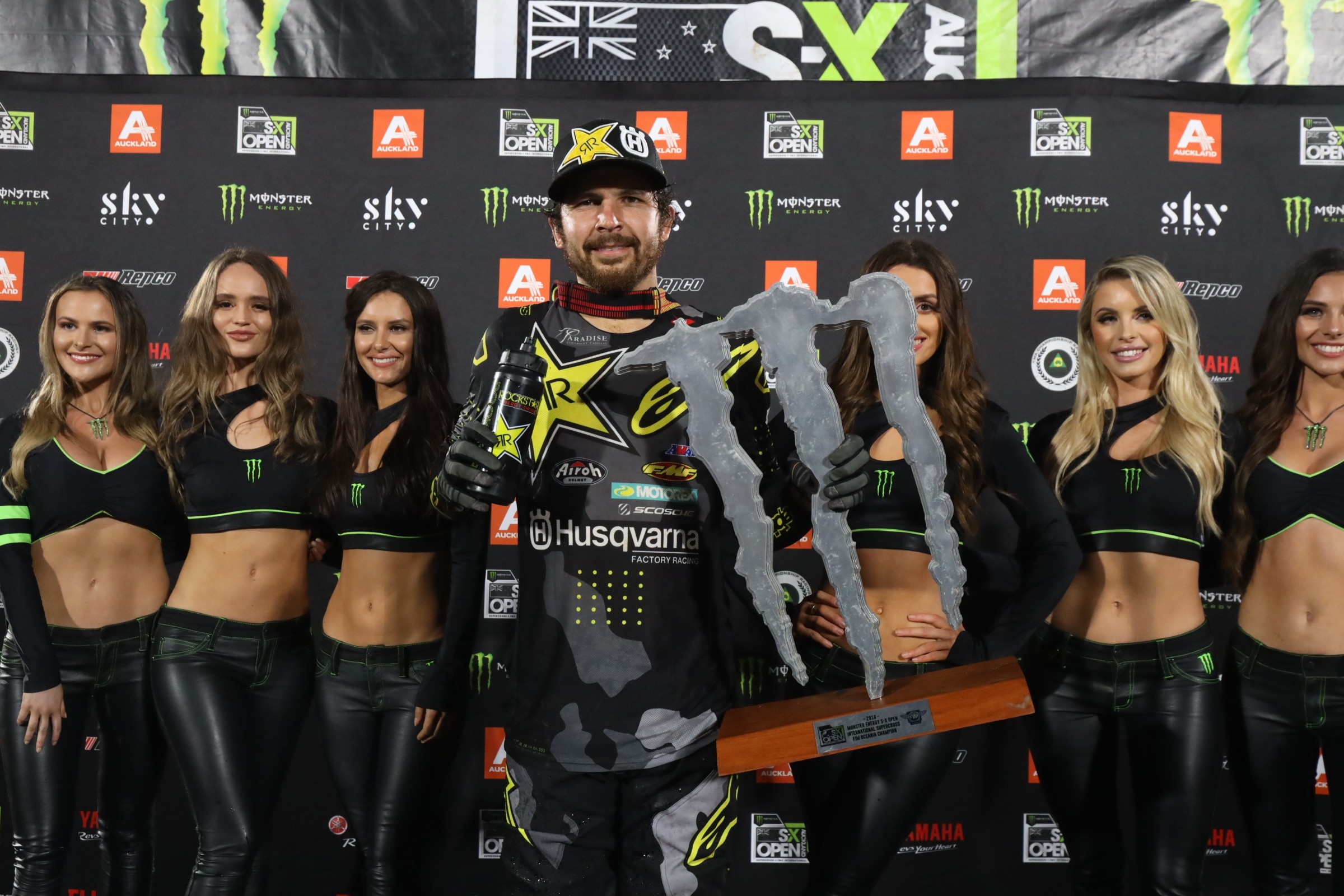 Rested and reset, Rockstar Energy Husqvarna’s Jason Anderson got the win, as he was expected to do, at the Monster Energy S-X Open in Auckland, New Zealand. It was not easy, though. The event featured three eight-lap main events, and Anderson struggled out of the gate in all three of them, giving him little time to make passes and get to the front. Also, the Sky City Shortcut (their version of the Monster Energy Cup’s Joker Lane) could be used one time total in the three races, but it chopped a ton of time off of a lap and led to more chaos. Anderson did a good job keeping his cool through all of the chaos, and turned 1-2-1 scores into the overall win.

Before the race, Anderson said his long trip to Europe to prepare for the Monster Energy FIM Motocross of Nations took a lot out of him, and that led him to withdraw from Red Bull Straight Rhythm and Monster Energy Cup. He took some time off and then hopped back on a supercross track a few weeks ago to begin his prep for 2020, which also includes this race, and the AUS-X Open in Melbourne, Australia, on November 30 (Anderson flew home after this race and will then take another long flight across the Pacific Ocean to get back to Australia in two weeks).

He spoke about the event in the post-race press conference.

Racer X: Jason, coming here with big credentials, it was not easy. You had to battle hard.
Jason Anderson: Yeah. it was wild. All the battling and everything like that was intense. Honestly, the one race I took the joker lane, he [Luke Clout] beat me! The races I didn’t take it, I won. So it was crazy. It was good battling. Even that third one, I was riding up there, trying to get to the front. I was in the lead and then next thing you know I’m in fourth. That Joker Lane was crazy, you would make up so much time when you took it. So it was just fun. We were all battling. The hardest part for me was the starts. I had been setting up my bike a lot for the [metal] grate [start]. Last year we had that at Sidney, so it kind of threw me off a little bit. But honestly at the end of the day, it was good for me to get out there. Good starts or bad starts, I had a fun time battling. These guys were riding good. I think I had a few little tricks in some of the jumps and the whoops section and stuff like that I felt pretty good in. It was a good time. Everyone is riding good.

The track seemed tricky. After the big triple there was a rhythm that no one got every single lap. Talk about what made some of those sections so difficult.
After the triple you try and hop over that first little one [jump] to go three-three. Honestly, for how hard-pack the track was, there were some spongy areas. So it kind of threw us off a little bit. It was tough. The three eight-lappers and the short break gives you such a hard time to get ready for the next one. I did the first one and I had such bad arm pump right after the first one, and I was like, “I’ve got to figure out a way to get through this.” I just tried to loosen up—it was my right arm. I just didn’t touch my front brake the second two mains because I was like, “If I touch it I’m going to keep getting worse arm pump.” So in my head I’m just trying to flow nicely and everything, but it was slick. It was crazy.

All of this, coming from bad starts and having to catch these guys, not using the Joker Lane… and the interval training, which is practically what the three short sprint mains are like…is this all stuff that you can use to help you for your championship?
Tonight I think my starts were so horrible, but my race craft is pretty good. I had to work my way up and try and battle. It was chaotic, but at the same time I think staying calm in those crazy situations is what’s key. Making passes and making decisions that are good and not too wild and trying to stay consistent. I think that’s something that you learn over the years as you get older and you keep racing and racing. It’s an experience thing, but at the same time, you still want to keep those skills sharp. So I think racing over here, there’s nothing wrong with it. For me, this is my seventh year racing the 450 class and I'm only 26. I want to keep racing a lot more years. So, coming over here and doing these races, it gives me a little bit of a breath of fresh air, with scenery and everything like that. So I think it’s good for me just to stay positive and just motivated for the season. It’s something for me to work towards in the off season, and then at the same time AME and this whole organization, they do such a good job [producing these races]. It’s a good time, too, when we come over here, so that’s what it’s all about.

You are the points leader in the two-round FIM Oceania Championship. You didn’t get the title last year because you didn’t race here in New Zealand. Can you get it done this time?
I hope so. I don't know. These guys are racing for a championship [in the five round Australian Supercross Championship], so they’re probably going to step up their game in Melbourne. We’ll see how it goes.

What are your thoughts on the quality of the Australian guys?
It’s impressive. The last few years I came over, I’ve battled Deano and I battled [Justin] Brayton. This year it’s not like Brayton was any worse or anything like that, but I was battling a lot more guys, like Luke. You can definitely tell that Brayton being over here has raised the level of these guys. They’re riding good. Obviously you come to America. It’s a different step and difficult culture and everything and you’re away from home. Obviously Metty [Brett Metcalfe] has been there. He knows what it’s about. But Luke going over, it’s a tough move, but at the same time you see the progression that he has had over the past couple years. It’s just his riding is a lot more mature, so it’s cool. I think that’s a big thing of Brayton coming over here. He has just helped the level be higher, and it’s cool. He’s won three championships, but these guys aren’t making it easy for him for his next one. I’m excited to see how it goes down. I’m just going to try and be out front so I don’t have to worry about any of that! We’ll see the race go down at Melbourne!