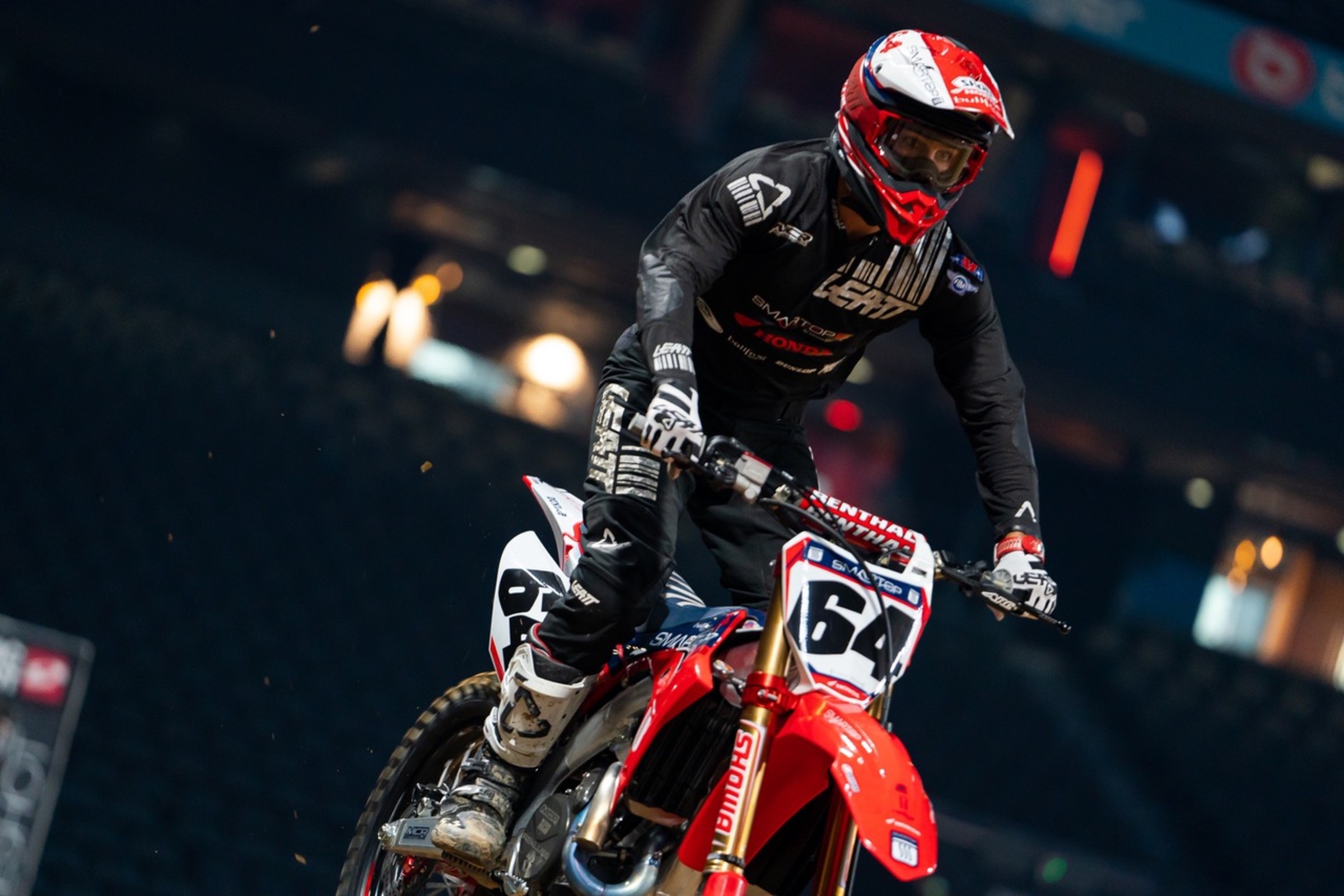 Vince Friese rode well at the 2018 Paris Supercross, where he had only one finish outside of the top-five. Friese was solid Saturday, finishing the day second overall (with 13 total points) to Justin Barcia (six points). On Sunday however, Friese's usual great starts were nowhere to be found and he scored a total of 23 points, giving him 36 on the weekend and fifth overall.

Steve Matthes caught up to him following the racing.

Which is super odd.
Yeah, obviously I’m on a stock bike. Honestly, what happened is I got it dialed in last night on the last start, and tonight on the first start I nailed my jump but the gate here has got a little ramp to it. It doesn’t lay flush. So I jumped so hard out of the gate that I jumped off the gate. I got like a couple feet of air off the gate. Obviously, my wheels were in the air, and those guys were down driving. So that’s what happened on that one. Then the second one, I think [Jordi] Tixier bumped into Malcolm and it sent Malcolm over into me in the second turn.

I saw you guys had some words after, right?
Yeah. In the third turn there. It bent my brake pedal all around my foot peg. So not only did I have no rear brake, I was stepping on it half the time. So I couldn’t do anything in that moto. Then that last one, I had a bad gate pick because of that one. I started I think seventh and I kind of had a battle with Justin [Hill] there for a little while. We kind of just were maybe 80 percent cruising and I got around him a couple laps to go. I think I got fifth. It was not the way I wanted the night to go. I was trying to kind of keep it consistent and hopefully be in the mix for an overall podium. This type of racing, it goes that way sometimes. It obviously happened to some guys last night. I was just kind of victim of a little fluke deal.

But then other times you get on a roll and you start nailing your starts. Like J-Mart this weekend, just got up front every time, then got a good gate pick. He was always putting himself in a good spot, and that’s how these things work, like you said.
Yeah. That’s what these races are about, putting yourself in a good position and then getting a little bit lucky at the same time. I did that well last night. I didn’t do so well with it tonight. Still had a blast here. It’s always so much fun, just the vibe of all the guys, the Americans and the French guys. We just had a lot of fun. The racing was intense, though. We weren’t racing like we were just here to have fun. It was intense up front.

It was a lot of laps, too.
Yeah, that 14 minutes at 40 seconds a lap, that’s a lot of laps. There was no backing off. It was all-out the whole time.

You got to be stoked about even like you said, today didn’t go great, but yesterday was really good. You’re on the box. In Monster Cup you led laps. We talked after that. It’s been a cool off-season for you.
Yeah. We’ve still got Geneva to go. I’m looking forward to that. Try to get in as much work as we can between now and A1 and I think we’ll be in a good spot.