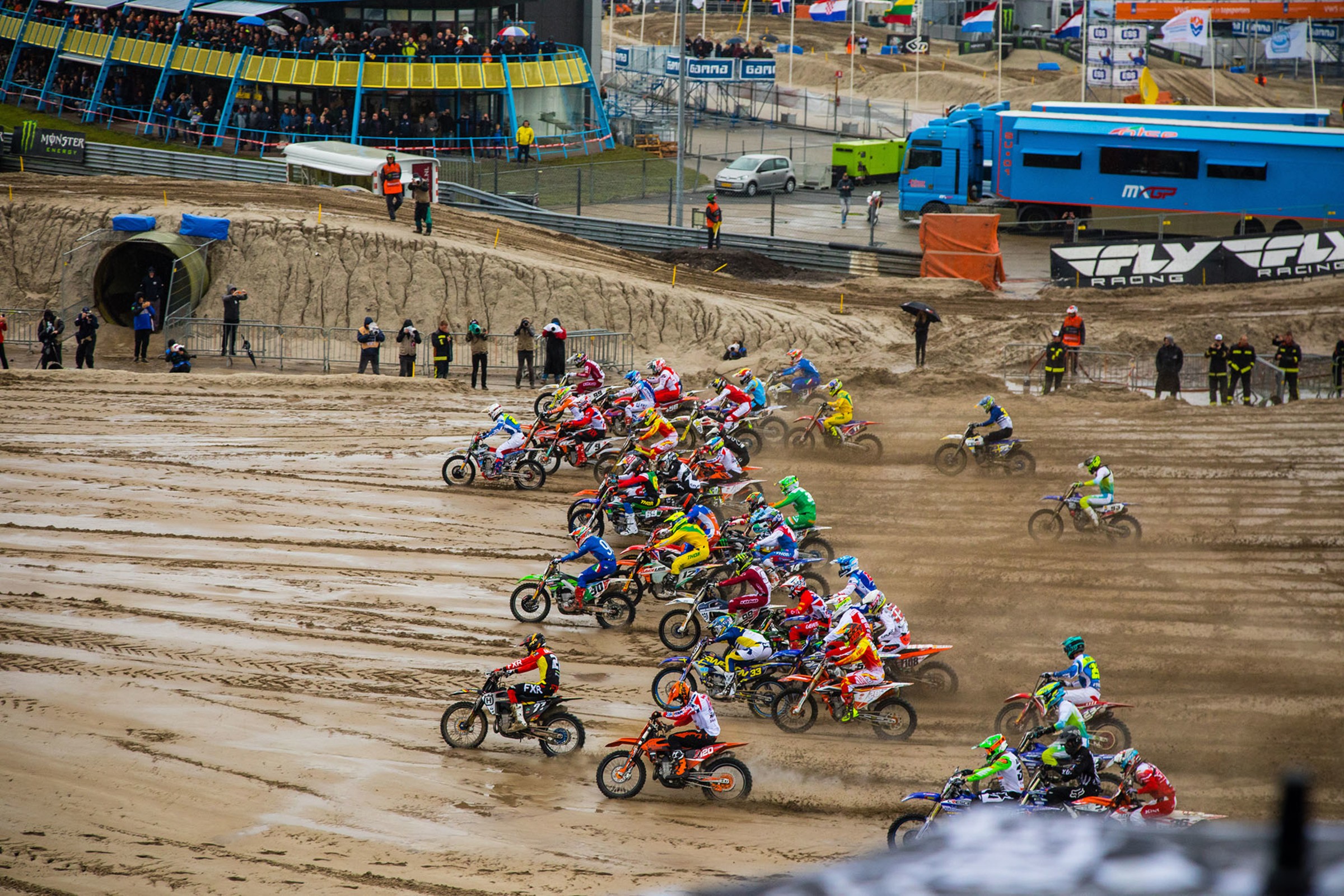 We’re once again firing off questions at long-time pro Jason Thomas for some opinions, this time on the 73rd edition of the Monster Energy FIM Motocross of Nations. Jason attended the race as part of the MXGP-TV broadcast team.

We heard all about the race. What was Holland itself like? Where did you stay? Where's the track located? In the woods or near the city?

The Assen TT Circuit is way up in the north of Holland. Being close to the North Atlantic coast, there is a bit of a different vibe than say Arnhem (site of World Supercross in mid 2000’s). One of the first things first timers would notice is the onslaught of bicycles. Riding bicycles as their primary form of transportation is a Dutch staple. There are bicycle specific thruways and cars are very deferential to them as they weave in and out of traffic. It’s been said that there are more bicycles than people in the Netherlands, and I don’t doubt that for a second.

Matthes and I stayed in the city of Groningen, about 20 minutes north of the race venue. It’s a college town and has all of the conveniences you would associate with that. We were even able to utilize Uber Eats on Saturday night, believe it or not.

The track is located in a city called Assen and there isn’t a whole lot going on there without a race in town. Whether its World Superbike, MotoGP, MXGP, or this year’s Monster Energy MXoN, racing is certainly what puts this sleepy town on the map. The race track sits just south of the city and if you weren’t searching for it, would certainly never find it. It’s off the beaten path and a world of its own. Compared to Daytona International Speedway, which basically has its own ecosystem built around it, Assen TT Circuit is a different ballgame.

Assen in a unique venue for motocross, but legendary for road racing. What is that facility like?

The facilities are actually pretty accommodating. There are suites for sponsors, purpose-built press conference rooms, media centers, medical centers, VIP lounges, etc. Motocross of Nations events are typically held at motocross tracks, making infrastructure challenging at times. That was not the case at Assen. Holding an event like this at a man-made, one-off track takes criticism and skepticism at every turn but there can be no question that it was the best facility the race has ever seen.

How bad did it rain and what was the weather like?

The weather sucked. There was never a time throughout the weekend where rain wasn’t a constant threat. Friday and Saturday were hit and miss, with sun breaking through the clouds at times, followed by immediate rain and wind. Once the rain set in on Saturday evening, though, it never really stopped until I flew out of Amsterdam Monday morning. The wind was blowing steady at around 20 MPH and the rain’s intensity varied a bit but never really gave any full relief. It wasn’t a whole lot different than RedBud last year or Matterley-Basin in 2017. That’s three in a row for those keeping score. The ONLY saving grace was that the sandy soil helped soak up the water and the asphalt facility didn’t create the muddy mess that 2017 and 2018 brought. I am fairly certain that there are a few motorhomes still stuck at RedBud a year later.

Miserable conditions all day—but were the home fans still going off?

Yes, but it was a different feel. The grandstands were on the other side of the track from the pits, so we weren’t really subject to the chaos. We could see and hear the smoke bombs, chainsaws, and chanting, but it was maybe 100 meters away from those on the paddock side. The Dutch came out in force to support their home team but it wasn’t the 50,000+ droves that I have seen at Ernee in France or Maggiora in Italy. I would bet the weather was a tough get-around on Sunday morning for those undecided.

How did you cope with Team USA's performance?

I was okay, mostly because the weather turned it into more of survival than anything else. American riders don’t and will never ride in conditions like that as often as the MXGP field does. For the MXGP riders, those conditions are basically their entire winter training forecast. It’s unavoidable so they just suit up and go get it done, day in and day out. For the America-based team, conditions like that would warrant gym training and waiting until the following day to get their laps in. In Europe, you might as well go ride because it probably won’t be any better the next day. Going into a full mud race and expecting Team USA to shine would be a bit foolhardy.

It was awesome! The Monster Energy FIM Motocross of Nations is my favorite event of the year (close with Anaheim 1). To be able to commentate alongside Paul Malin and Jeff Emig was simply something I never thought possible. I have learned a lot in my previous TV stints at MXGP, so it was familiar confines, but that event brings a different level of expectation, too. With a bigger audience than any other race of the year, I was just hoping to share whatever insight I could. I would be happy to join the team again any time I am asked.

Do you care to add anything about the race itself?

For anyone who has never been to this event, please make plans in the future to attend. Next year in Ernee, France, will be an all-timer if the weather cooperates. The race there in 2015 was one of best races I have ever been to in any discipline or location. The atmosphere for MXoN can’t be touched. There is national pride on display that doesn’t exist anywhere else outside of the Olympics or World Cup, etc. The pageantry is unique to motocross and for an American, a chance to visit Europe in the fall is a great idea.

As for the results on the track, there has been much ado about America’s fall from grace. That topic is one that many disagree on and far too grand of a scope for this one question. One thing is for sure, though, the MXGP level has risen significantly in the last decade. That’s an unarguable fact based on the results worldwide. Be it America’s focus on supercross, the inconvenient calendar for the USA, the reluctance of America’s first choices to participate, etc. etc., there are many things that will always get brought up when Team USA doesn’t win. That’s inevitable. Regardless, I will continue to fly wherever this epic event is held and cheer on the red, white, and blue.