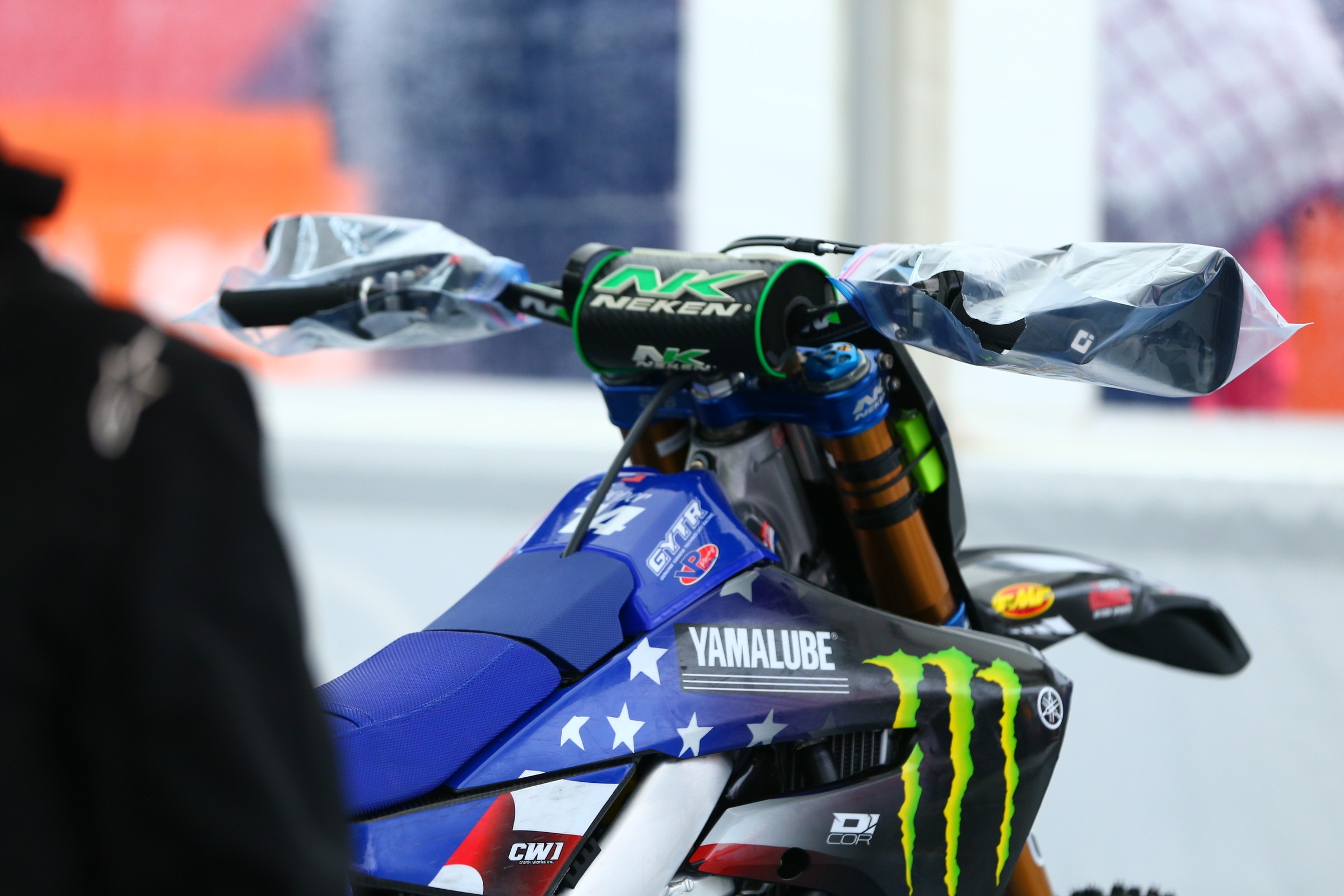 Uh, it's cold. It's wet. Rain started lashing out last night and the track was a complete mess for the B final this morning (won by Russia, but then the team was penalized, so Ireland was bumped into the final qualifying spot into the main motos).

The track crew did a ton of track work after the B final, scraping off as much mud as possible. Plus, the rain stopped, temporarily, and some wind helped dry things...a bit?

Team USA gave Cooper its inside gate selection, while Belgium and Netherlands elected to put their 450 riders (Jeremy Van Horebeek and Jeffrey Herlings) on their inside gates.  Jorge Prado grabbed his customary holeshot, Tim Gajser and Van Horebeek were 1-2-3. Justin Cooper started just outside the top five from his inside gate, but then went down and found himself in last. Reports are that Cooper crashed with…. his teammate Anderson! Soon, Cooper was a lap down and seen with the clutch lever dangling off the side of his bike. Anderson was 31st after one lap. Basically, the first lap of the race went about as badly as it could go for the Americans.

The Dutch had their problems, too. Herlings started around tenth and took awhile to get going, and Calvin Vlaaderen went down early.  Through the early laps, Belgium led, with Jeremy Van Horebeek third behind Prado and Gajser, and Jago Geerts, Begium’s MX2 rider, in 14th. Herlings made his way to sixth, getting around rival French rider Gautier Paulin, but then went down. He was able to get those positions back.

As the track continued to deteriorate, troubles for others began. Britain’s Nathan Watson was found with his bike stalled on the track, and Australia’s Kyle Webster got stuck in a hole. With 10 minutes to go, Gasjer took the lead from Prado. Then, Herlings found his groove, and the bullet started shooting toward the front. He was able to move up and pass Van Horebeek for fourth, which helped moved Netherlands into the top spot in points.

Herlings kept going. He passed Seewer for third, then caught Prado, and Prado ducked into the goggle replacement lane, allowing Herlings to second. Herlings had a huge gap to make up on Gasjer, but he had the pace to do it.

With a lap to go, disaster for Belgium as Geerts had to pull in with bike problems. He was tenth on his MX2 bike, a huge blow to a race-win contender.

On the last lap Herlings got to Gajser’s rear wheel, but lapped rider Dean Ferris was in the wrong place at the wrong time and actually blocked Herlings twice. Herlings lost ground but dug deep to catch back up. He ran out of time, with Gajser scoring his first-ever MXoN win.

Prado held on to third ahead of Seewer, Paulin and Van Horebeek. It was a disastrous moto for Team USA, with Anderson 17th and Cooper, without a clutch, 25th.

The Netherlands ended up with the second-best MXGP score (Herlings) and Vlaanderen was the second MX2 rider at the finish (he was 10th, Dane Thomas Kjer Olsen was seventh) so the home team is looking good.

Estonia’s Harri Kullas grabbed the holeshot in this one over Netherlands’ Glenn Coldenhoff, and Coldenhoff wasted no time doing what he needed to do—taking the lead and taking off. Team USA put Zach Osborne on the inside gate, he got pinched off in turn one and came out around 11th, but then came back to seventh early. Justin Cooper, riding with an injury from his crash in moto one, was way, way back, outside the top 30.

Pauls Jonass and Shaun Simpson slid into second and third over Kullas. With Coldenhoff dominating the moto, it was up to Vlaanderen to stay consistent for the Dutch, he was 13th which was certainly enough, considering the problems for so many others. Belgium had Kevin Strijbos crashing early and down in 25th, Team USA’s Cooper was 30th, and France had Tixier in 10th and Renaux in 20th. On the last lap, Renaux’s bike quit, which made for a huge points loss for France. Tixier was able to collect seventh.

There wasn’t much going on at the front of this one, as Coldenhoff rode just fast enough to maintain his lead but also preserve his bike. Jonass closed at times from second but was never a major threat, Simpson was a strong third for the Brits. Osborne stood seventh, was passed by MX2 rider Thomas Kerr Olsen, but then Olsen went into the pits for goggles, and Osborne got back around. Zach then passed Germany’s Dennis Ullrich to take fifth, which he held to the end.

Coldenhoff now has three-straight MXoN moto wins. Combining his win with Vlaanderen's 10th and the Netherlands has a massive points lead heading into the final moto at home.

Tim Gajser grabbed the Fox Holeshot in this one, trying to go 1-1 in his motos today. Belgium’s Jeremy Van Horebeek was second but his teammate Kevin Strijbos went down early, bad luck for the Belgian team, and essentially the end for the only team that even had a slight chance to overcome the Dutch. As for the Dutch team themselves, Jeffrey Herlings was given the inside but still got a bad start, then he crashed and found himself 20th. His teammate Glenn Coldenhoff was amazing again, though, starting sixth on the outside gate and quickly moving to third. Then Gajser crashed from the lead, allowing Van Horebeek to go by. It wasn’t long before Coldenhoff got around to take over the number-one spot, looking for his fourth-straight moto win at MXoN.

As for Team USA, it wasn’t good again. Anderson, from the outside gate, was ninth, then moved to sixth. Osborne got pinched off from the inside and found himself 15th, and then 17th. He later stopped for goggles and fell as far back as 20th, then rallied back to 13th. Anderson finished eighth.

Herlings started his usual crazy mid-race charge, but it cost him because he crashed again. Herlings found himself in tenth after his second fall. Not that it was a problem for the Dutch, because they held a 30-some point lead in the team standings anyway! Herlings kept going and made it all the way back to fourth, making up a crazy number of positions over the final minutes.

Gajser, after his crash, closed back up to Coldenhoff, then made a mistake, then closed back up again. Coldenhoff had it under control, though, and held on to win the moto by about three seconds. It’s his fourth-straight moto win at this race, and more than enough for the Netherlands to win the race for the first time ever.

As for the podium battles, the Belgians had enough for second, led by Van Horebeek’s sixth in the final moto. The British team held third most of the way, temporarily the French over took them for a podium, however that team’s amazing fortune at this race finally ran out—Paulin’s bike let go and the Brits were boosted back onto the box with third.