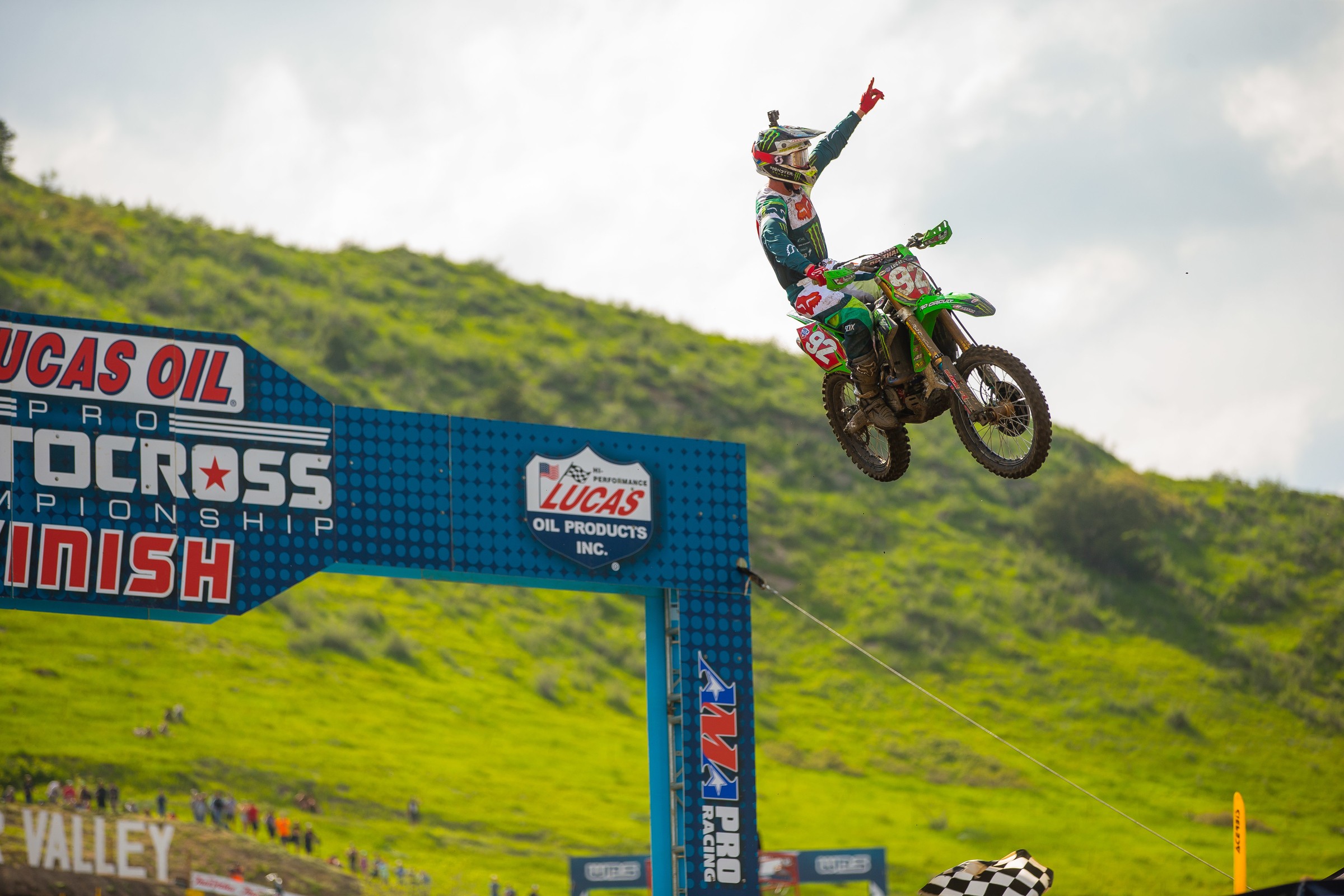 It doesn’t matter what sport you’re talking about; 2-2 is a whole lot better than 1-3 when it comes to a series. Coming into High Point, the latter scenario is what Monster Energy Kawasaki’s Eli Tomac, who’s won a single race to Honda HRC’s Ken Roczen’s two, will be trying to avoid. Historically, neither rider seems to have an edge at High Point—they’ve both won there twice, although only one of Tomac’s High Point wins came in the 450 Class. We’ll see who’s got the advantage there this weekend. –Aaron Hansel

Yes, we know High Point is round four, but for Monster Energy Kawasaki’s Joey Savatgy, who returned from injury at Thunder Valley, it’ll be round two. Things didn’t go great for Savatgy in Colorado—he crashed out of the first moto and was 37th in the second—but by his own admission he wasn’t expecting to set the world on fire anyway. After the race he told us he used the second moto as a testing session in the hopes of figuring out what he and the team needed to work on during the two weeks between then and High Point. This Saturday we’ll get a chance to see how much progress he’s made since. –Hansel

Thanks to a torn ACL and everything that comes with it, we haven’t seen Rocky Mountain ATV/MC-KTM-WPS’ Benny Bloss race yet in 2019. That’ll change this weekend when Bloss rolls out for battle at High Point. It’s hard to think he’s going to come out and kill it right away after being gone so long, but he’s also got the advantage of being completely fresh, unlike most of his competitors who’ve been on the grind for months. Whatever happens, it’ll be interesting to get an initial glimpse of where Bloss fits in with 39 other 450 Class riders. –Hansel

After claiming the first three wins of the season, it’s safe to say Monster Energy/Pro Circuit Kawasaki’s Adam Cianciarulo is on a hot streak right now. In fact, nobody’s done that since James Stewart won the first four in 2004! Before that it was Ricky Carmichael, who won the first four in 1999, and Mark Barnett, who swept the first seven in 1981. If Cianciarulo keeps his winning streak alive at High Point, he’ll be joining some pretty elite company. -Hansel

If someone’s going to keep Cianciarulo from going four in a row this weekend, there’s a good chance it’s going to be Monster Energy/Yamalube/Star Racing Yamaha’s Justin Cooper. Even though he hasn’t won a pro race yet, he’s been extremely close multiple times and has won the first moto in each national so far. He was putting together a 1-1 performance at Thunder Valley too, before a crash handed the lead to Cianciarulo. Cooper’s going to get his first win this season. Will it happen at High Point? -Hansel

Kyle Chisholm will make his 2019 Pro Motocross debut this weekend with JGRMX/Yoshimura/Suzuki Factory Racing Team. The 31-year-old was putting together his own plan to race several nationals this summer but was called upon by JGRMX to fill in for Justin Hill. While the team stated his deal will be on a round-by-round basis, Chizz is familiar with the RM-Z450—as he rode one as a member of the HEP Motorsports Suzuki team during Monster Energy Supercross—and has worked with the team in the past. It was High Point last year that Chisholm suffered a knee injury that sidelined him for the remained of the championship. Let’s see if Chizz can redeem himself this at High Point this time around. -Mitch Kendra

Cameron McAdoo, who was a fill-in rider for GEICO Honda in the 250SX West Region of Monster Energy AMA Supercross, was without a ride but stayed sharp on a CRF450R that the GEICO team provided him to practice on. This week he was signed to fill-in at with Troy Lee Designs/Red Bull KTM. Adding another talented rider to an already stacked 250 Class, it will be interesting to see where McAdoo finishes. He finished of supercross on a high note—can he pick up where he left off? -Kendra

Looking at the 250 Class results from the 2018 High Point National, we are without the two top finishers—Aaron Plessinger and Austin Forkner—this year (although out due to injury, Plessinger is in his rookie year in the 450 Class and Forkner is out for the entire Pro Motocross due to an injury). Who got third and fourth last year? Monster Energy/Yamalube/Star Racing Yamaha teammates Justin Cooper and Dylan Ferrandis, respectively. So far in 2019, Cooper has unbeatable in the first motos and is tied with Cianciarulo for the class lead with three moto wins a piece. Ferrandis has yet to win a moto this season although has three moto podiums and has shown he has the speed for more than that. The question now is who will strike their first overall win of 2019? Could it happen this weekend? -Kendra

Saturdays Are for the Boys…and Girls

Jordan Jarvis isn’t a stranger when it comes to the Lucas Oil AMA Pro Motocross Championship. The amateur star raced in several 125 All Star races in 2018, but tomorrow she will a crack at competing in the 250 Class with the men. Look out for the Yamaha YZ250F with the #301 on it—she will definitely be turning some heads tomorrow. Follow Racer X’s coverage to keep up to speed with Jarvis’ day. -Kendra

Earlier this week we posted a video update on High Point Raceway heading into the 2019 High Point National, as changes were made to the “pro section” of the track farthest from the starting gates. Now, the section that was once a straight-shot downhill double (for those gutsy enough) that sent riders back up to the top of the track winds through the trees that once sat next to the track. Let’s see how this new layout plays out for 2019. Check it out below. -Kendra