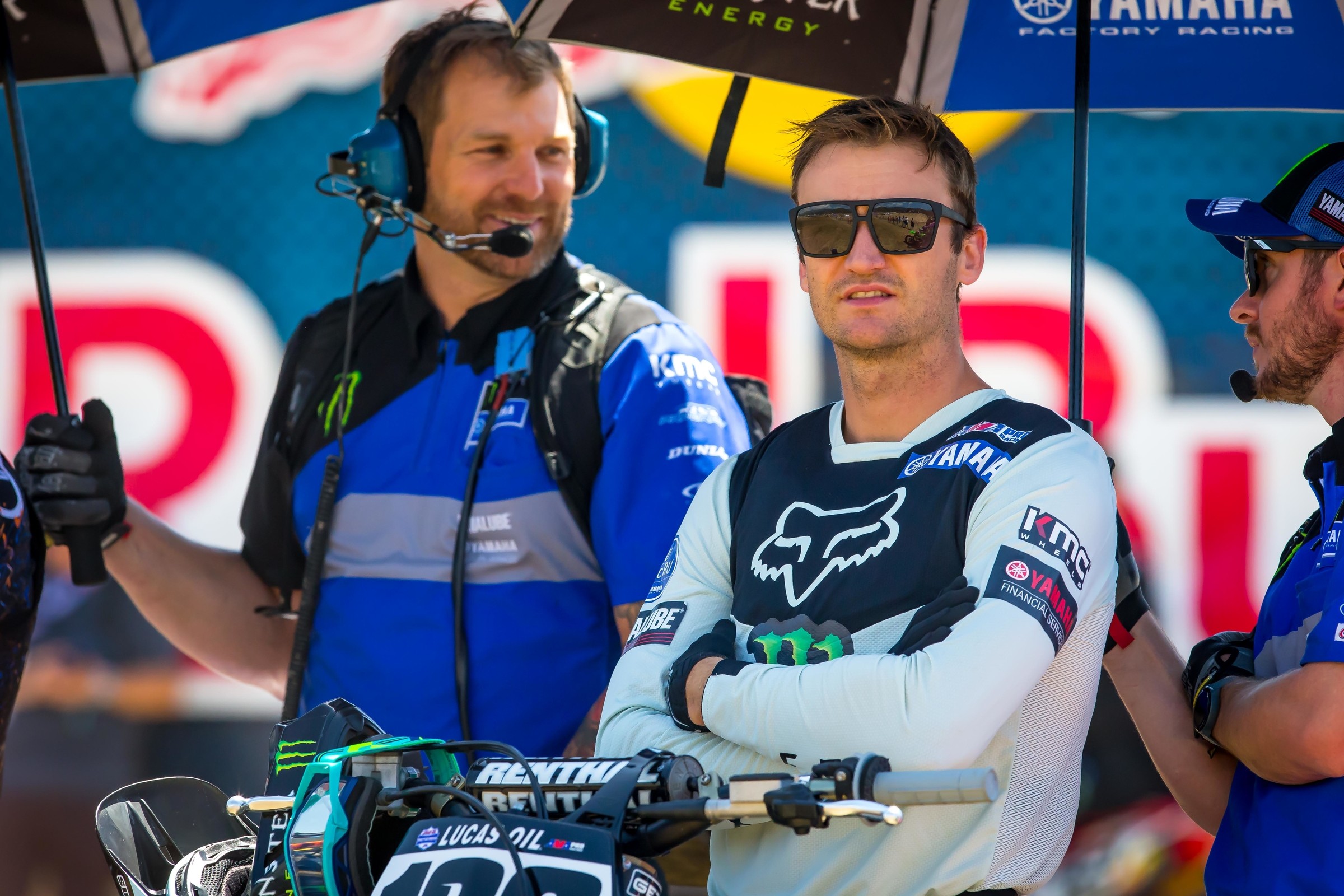 450 Words Aussie Up, Aussie Down

The Australian, once an MX2 contender in Europe’s Grand Prix circuit, finally showed what he had. It just took way too long.

We’re not talking about Hunter Lawrence. He’s just fine. After an unfortunate crash left him with a sore bottom (really) at Hangtown, and an injury forced him to miss all of Monster Energy AMA Supercross, the 19-year-old hammered to the front of the pack in the second moto of the Fox Raceway National on Saturday. While a late crash handed the victory to Adam Cianciarulo, Lawrence he showed he’s got the goods. In the early stages of his U.S. development, confidence is all that matters.

Look, there’s no reason to have doubted any of it, as Lawrence’s talent came apparent with a late-season surge in the 2017 FIM Motocross World Championship in the MX2 class, which led to a GEICO Honda deal, albeit with one extra year in Europe. His 2018 season over there started terribly, but he was contending for moto wins again late in the season, and then his Motocross of Nations ride at RedBud was solid.

He never made it to Monster Energy AMA Supercross though (due to injury), and while the weekly “Stopwatch National” circuit in Southern California indicated Lawrence had speed, nothing is certain until it happens in a real race (just have a glance at the other recent GP convert, Thomas Covington, who has struggled mightily in these first four motos. Sometimes things don’t fall into place as expected).

With a solid run under his belt—helped by heaps of testing after Hangtown and a better bike setup—Lawrence is now off and running.

“There’s a lot of positives to take out,” he said to our Steve Matthes. “Sure, bummed about crashing in the lead, but it wasn’t like a brain fart. It was more just, not challenging myself, just feeling really comfortable. Just feeling super comfortable and just really flowing. Every little inch on the track counts. I wanted to make a statement after the first moto, which I think is human, normal. Bummer on the first moto.”

The first moto had the bad luck again. First, Lawrence was running into bike issues, and then he crashed together with Jordon Smith.

“A rock or something in the track smashed the oil filter cover cap,” he explained. “So I had a massive hole in that and it was pumping out oil. It happened on the lap previous to the incident, on that lap. Not the rock hitting it, but it was already starting to lock up. I could feel it. when it’s an engine-related issue, you just know and you’re like, geez. It’s not looking good.”

The previous week at Hangtown, Lawrence was running seventh in moto one and trying to get Michael Mosiman for sixth when he crashed, and his teammate RJ Hampshire had nowhere to go and hit him in the…. rear end. Lawrence was in pain the rest of the day and finished outside the top ten.

While Lawrence can take the positives out of his ride on Saturday, there is one caveat: Pala is the only track in the Lucas Oil AMA Pro Motocross Championship that he already knows. He’s logged plenty of weekday sessions there and even did some motos at the Cal Classic event last month. It’s back to learning this weekend at Thunder Valley, and while he did race at RedBud last fall, does anyone feel like the MXoN track seemed like the regular national track?

Also, Lawrence, having not finished the first moto, was probably fresher for moto two than the competition. No matter, he just needed something to prove he’s going to run at the front. He did that, so he’s in a better place regardless of the circumstances.

That’s the kind of ride Dean Ferris is looking for right now. Back in 2013, Ferris finished sixth in the GP’s MX2 class, and then nailed two holeshots on his 250 at the Motocross of Nations. He went 4-5 overall in the races, and was probably the third-best 250 rider that day behind Ken Roczen and Eli Tomac. Red Bull KTM promptly signed him to a full-time deal in the U.S. It didn’t work out at all—before the Lucas Oil AMA Pro Motocross Championship even started, Dean was back in Europe, dispatched back to the GPs on a Husqvarna.

He’s been itching to prove himself again, so after three-straight Australian National Motocross Championships, he decided not to re-sign with his team and take a chance on the U.S. At Hangtown, Ferris told me that when he turned down a new deal with his CDR Yamaha team back home, he literally had nothing lined up, zero prospects and also zero income. He’s gone nearly five months without a paycheck, instead of having money coming in reliably from his team back home.

He had one ride in his head, though. Dean showed up randomly for the High Point National in 2017 and finished second in the first 450 Class moto. That was the type of performance he was supposed to log back in 2014. It was too late now, though. Instead of getting another deal here immediately, he’s had to scratch and claw to get another shot.

Ferris was ready to privateer it for Hangtown, but two weeks before the nationals started, Ferris got the call from Monster Energy Yamaha Factory Racing. Josh Grant, filling in for Aaron Plessinger, broke his leg, and thus Dean got the factory 450. That was good news, but, this bike is much different than what he raced Down Under, and also at High Point in ’17.

In the big picture, he’s happy to have gotten a ride, but he wants to perform much better on the race track, where he’s scored 11-8-10-13 finishes in four motos so far.

“Definitely it’s not where I wanted to be, but it is what it is,” said Ferris to our Steve Matthes. “I’m glad that these guys called up. Late than rather never. I’m really thankful for that. I was going to try to do the privateer thing for the first three rounds, and it would have definitely just emptied the bank account and been really hard work. So we’re working forward, but I’m still pumped about this.”

Ferris is still working on getting comfortable on the bike, but we hear some bigger changes are coming for his bike this weekend—maybe even running the forks he ran in Australia. No doubt he wants to be back up front once High Point rolls around again.

“Yeah. I’m definitely frustrated,” he said. “Like I said, I’m grateful for the opportunity. We’re going to keep working forward. We’ve got a bunch of stuff to keep testing. The team’s keen as mustard, we’d say in Australia. Keen as mustard to keep improving and make me comfortable. It’s just I’m frustrated now because the day didn’t really end on a high note. At least I got a top ten last weekend and we improved. I improved for moto two here, just the result wasn’t that good."