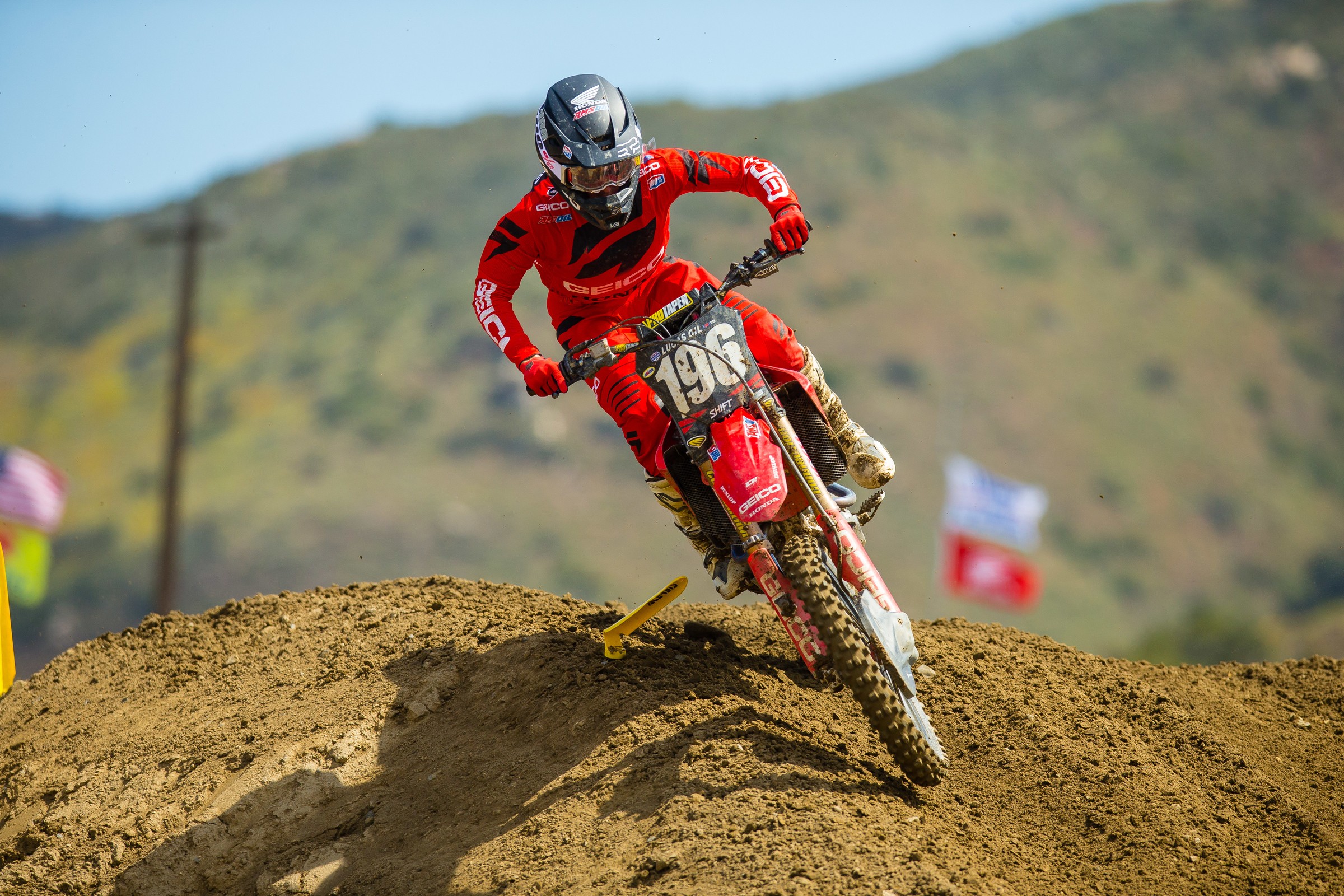 We’re once again firing off questions at long-time pro Jason Thomas for some opinions on the second round of the Lucas Oil AMA Pro Motocross Championship.

Hunter Lawrence was good on a track he’s familiar with. Can he carry this forward on tracks he doesn’t know?

Yes, but it will be a little tougher. The MXGP schedule that Hunter is accustomed to has a plethora of riding before it’s time for points-paying racing. That wasn’t a factor for Pala, as he has practiced there many times and also raced the Cal Classic a month ago. Last weekend, RedBud, and the Florida National are the only tracks he will have ridden leading into the race. With two short practices before it’s go time, he will be under pressure to find the pace quickly.

My suggestion would be to find a way into every press day practice on Friday. I don’t know how the rules work for that but if he can pull it off, that will go a long way towards familiarity. Instead of his first lap Saturday morning being a true introduction, he will be able to focus on his lap times instead of learning the track direction. It could be a huge difference maker, especially in timed qualifying.

I do think he will be a factor all summer. He is in shape and has been through the grind of outdoor seasons, albeit in MXGP. The one variable I think he will need to work on is consistency off the gate. The 250 field is talented at the front, making track position valuable. Dylan Ferrandis has struggled with this already in the young 2019 season. If he can put himself up front early, he will win several races. If he finds himself in 15th on the first lap, the leaders will be long gone.

With the race day schedule in the U.S. differing from GPs, how hard is it to get accustomed to tracks?

I covered this somewhat above but it’s worth mentioning the most important point. It’s not that Hunter won’t be able to learn the track. He can put the jumps together and follow someone around the first few laps. The hard part is finding a race winning pace with the given time. The riders he is competing against have all raced national motos on these tracks already, learning the nuances of the dirt and lines that may form. Hunter’s approach will be more straight forward. He won’t know the subtleties; he won’t have the experience. He will just have to absorb every bit of info he can from previous years’ race videos, reaching out to those with insight, and studying the track closely on Fridays. It’s not ideal, all of that learning in a short time, but it’s doable. Anything he can do to be comfortable sooner on Saturday would be a good idea. In the past, riders in Hunter’s spot have raced amateur day before the race to learn the track but I would prefer the press day route if possible.

Eli Tomac went beast mode late… AGAIN. What are you seeing? How is he doing this?

Tomac is easily the most confusing rider I have ever watched. He is so unbelievably good but doesn’t always uncork the fury. He has mentioned several times now that he needs to be “feeling it” or “feeling the flow” to find that extra few percent. It’s crazy how much faster he is able to go in those moments, though. He is able to drop anyone, anywhere. If he was ever able to harness that level consistently, it would be complete domination. We should know by now that he can only find that pace in spurts. Yes, he has had that pace for entire motos but I haven’t really seen it since 2015.

I believe that other worldly intensity is only reachable for him when adrenaline is at its highest. Late in the moto when he realizes he might not win. That urgency and panic pushes him into a zone that’s too much for anyone to touch. The question I have, though, is what triggers it? The first moto at Hangtown should have been the right circumstance. He was struggling to pass Jason Anderson and Ken Roczen was disappearing. He would have felt urgency and frustration, knowing he had to go and go now. Except, he didn’t. He couldn’t. It makes no sense on paper. It only makes sense to think it’s in Tomac’s head. Only he controls the ability to turn it on and off, except I don’t think he is consciously manning the switch. It’s some sort of random recipe combining comfort, urgency, and timing. The chemicals mix, the adrenaline kicks in, and he drops four seconds a lap. Weird.

A lot of parity in the 250 Class. How many winners could we see this year?

It’s great! I love the unpredictability. I think we will see several moto winners but the overalls may be shared by only a few. It’s tough to put two motos together at the very sharp end. The title contenders will end up winning these overalls but riders like H-Law, RJ Hampshire, Colt Nichols, Shane McElrath, Jordon Smith, Alex Martin, etc, who aren’t in the title fight, could still win motos. I have always maintained that the most interesting factor in a race is for the viewer to be unsure who will win. Right now, we are in the sweet spot. There is no clear favorite and every moto is a battle.

I don’t think this is the best track on the series calendar. Far from it, if I am being 100 percent transparent. It has the feel of a local race more than a national championship event, but it worked. The track created great racing. It wasn’t overwatered, it wasn’t soft, muddy, and rutty in timed qualifying. Riders were able to move around and switch lines because it wasn’t flooded in the morning.

I think the aspect I liked most is that the dirt was different. Most of the series has very similar dirt. Tracks that were hard-packed 20 years ago, like RedBud, have trucked in countless loads of sand, forever changing the texture. Pala was hard, slippery, and uniquely Californian. They didn’t shy away from the native soil. It was probably a bit drier than they would have ideally wanted but there wasn’t a huge dust issue, so I say mission accomplished. Pala added a bit of flavor to the series. Instead of completely changing the inherent surface (like Colorado will next weekend), Pala used the dirt they had and forced riders to adapt. Do I think it’s the perfect track? No, definitely not. I do think the race was a success, though. Our series could use more variety and Pala’s return provided it.

The starting strategy was a hot topic this weekend. Both LCQ holeshots were pulled from the very outside gate, as well as Ryan Villopoto in the 125 All Star race. Justin Cooper scoped that outside gate but decided against it. Adam Cianciarulo took the leap, though, lining up on the very outside gate with almost every option available and it didn’t work in his favor. Crazy or clever?

We have seen these obscure gate picks work before. Chad Reed’s inside line at Ironman last year is an obvious reference, Spring Creek’s very inside gate is another one, Thunder Valley’s outside gates in the mid 2000s (when the track climbed the hill there), High Point’s very inside gate in the late ‘90s, Binghamton’s very outside gates, etc. These picks are usually not the ideal gate but for those who want to gamble, we have seen them work. Riders hop up on a harder patch of dirt and cover the longer distance or beat the pack to the apex (if using a very inside gate) with sheer speed. I think those approaches are better left to those in need, though.

Adam Cianciarulo is a great starter. He is on a very fast Monster Energy/Pro Circuit Kawasaki KX250. Given his talent and the equipment underneath him, I don’t see any reason to get cute. He simply doesn’t need it. He is more than capable of taking his great gate pick, going next to the box, and coming out in the top three. That’s what he will do in most of the motos this season, if I was a betting man.

Cianciarulo's outside start in the first 250 Class moto.

I think he and his coach Nick Wey saw the holeshots in the LCQs and 125 race and felt maybe they could have an edge. My question is, was that possible edge worth the risk? Even if it worked perfectly, how much better would that be than if he went the traditional route? I truly believe Adam would have been in the top five had he chosen a middle gate. He’s that good. By moving to that outside gate, though, he is opening the door to chance. Being on the very outside of the pack is a very vulnerable position unless you are able to beat the wave. Instead of trusting his talent and equipment, he was now forcing the situation to go exactly to plan. If he had the tenth gate pick, MAYBE, this would be the ideal move. With the second overall pick, though, I just don’t think it was the highest percentage play. Both Nick and AC are very, very smart. They are acutely aware of racing strategy and relentlessly look for any hidden advantage. I believe they may have been overthinking this one, though. Adam wasn’t able to execute the plan perfectly and it resulted in a mid-pack start. We will never know how a center gate would have panned out that first moto, but he was eight positions better on the first lap in the second moto. If he was a poor starter on inferior equipment, I would applaud a move like this. For a guy as good as Adam, though, it’s unnecessary.

McElrath's outside start in the second 250 Class moto.

The other point I should add here is that the second moto holeshot came from this very gate! Shane McElrath had the 15th gate pick and opted for this far outside gate. He rocketed off the line, hopped on the harder dirt and left the power on all the way to Valhalla. He made it work, flying in the face of my above argument. My larger point here and where I will leave it is: Adam had a great pick (second) and didn’t need to gamble. Shane was 15th pick and needed to think outside box.